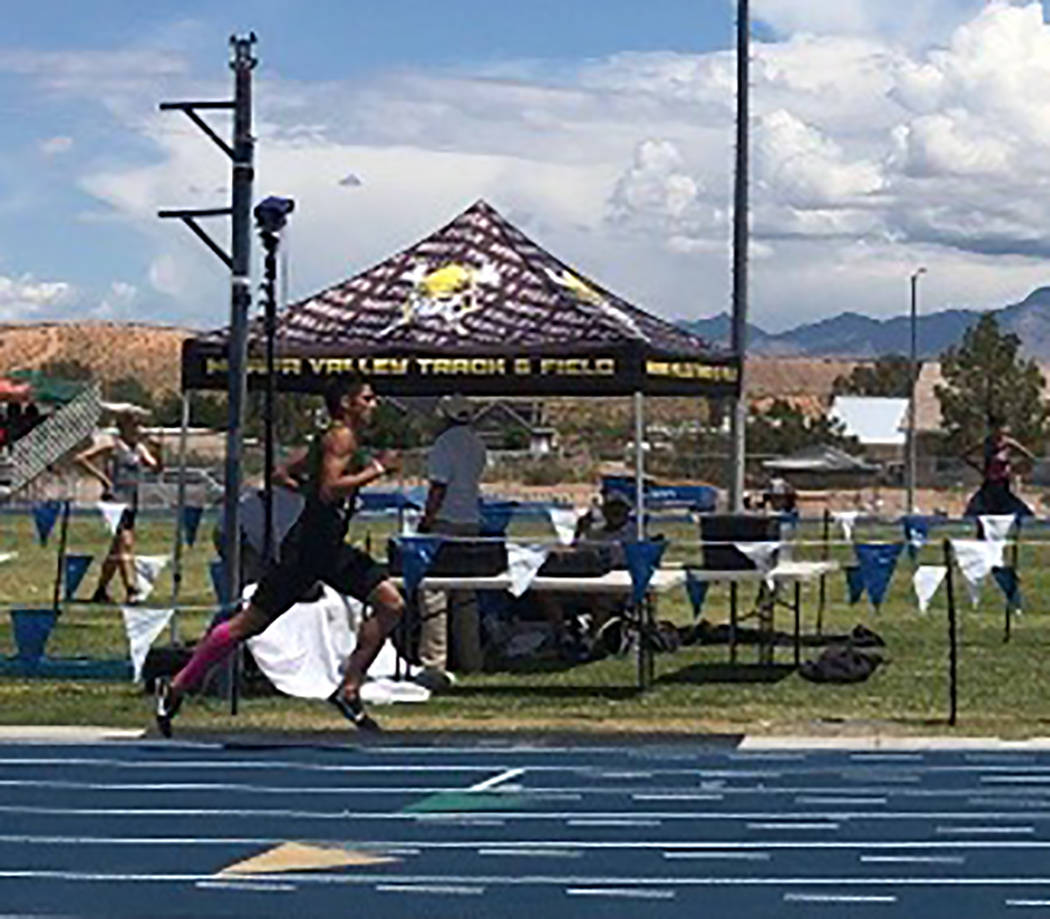 Ashley Anderson/Special to the Pahrump Valley Times Beatty junior Jose Granados set meet records in the 800-, 1,600- and 3,200-meter races at the Class 1A Southern Regional Championships at Moapa Valley High School in Overton.

After winning two events as a freshman at the region championships, Beatty’s Jose Granados swept the distance races as a sophomore, winning the 800-, 1,600- and 3,200-meter events, the last two in record time.

The only way to improve upon that performance this year was to set records in all three.

Granados rewrote the Class 1A Southern Region Championships record book in the distances last weekend at Moapa Valley High School in Overton, setting meet records in the 800, 1,600 and 3,200 while helping the 4 x 800-meter relay team capture the region championship.

“I was nervous, but I was excited because I was trying to see where I stand,” Granados said. “This sets you up as far as what lane you go in for state, so I wanted to run fast times. Also, I had the record to try and break, and that’s what made me nervous.”

“I think it’s easy to believe because of all the hard work I’ve been putting in,” he said.

Granados teamed with Alan Sandoval, Jovan Oseguera and Alfonso Sandoval to win the 4 x 800 in 9:26.77. He took the baton for the second leg in third place and quickly made up ground — Beatty coach Rusty Anderson told him he handed off the baton 170 meters ahead of the next runner — as the Hornets beat second-place Pahranagat Valley by almost 22 seconds.

Beatty also placed among the top three in the other three relays, earning entries in all four relays at state. Noel Gutierrez qualified in both hurdles events, winning the region title in the 300 in 42.51 and finishing third in the 110 in 17.59. Both marks are personal bests for the Beatty sophomore, who also placed fourth in the 100.

On the girls side, Beatty’s pole vaulters stole the show, as the Hornets swept the three qualifying positions for the state meet. Freshman Dayanna Sandoval won the event, clearing 6 feet, 3 inches, with sophomores Aphrodite Salazar (6-0) and Carmen Stephenson (5-9) right behind. All three marks were personal records.

Anderson was enthusiastic about the accomplishment, as all three of them are new to pole vaulting. “They are excellent young women who wanted to help the team,” he said. “Now, I think they love it.”

Senior Angie Altman qualified by finishing third in the 300 hurdles (59.88) and third in the triple jump (26-4.5), and she also will be going to state as a member of the 4 x 800 relay team. The Hornets will send competitors in all four relays to the state meet.