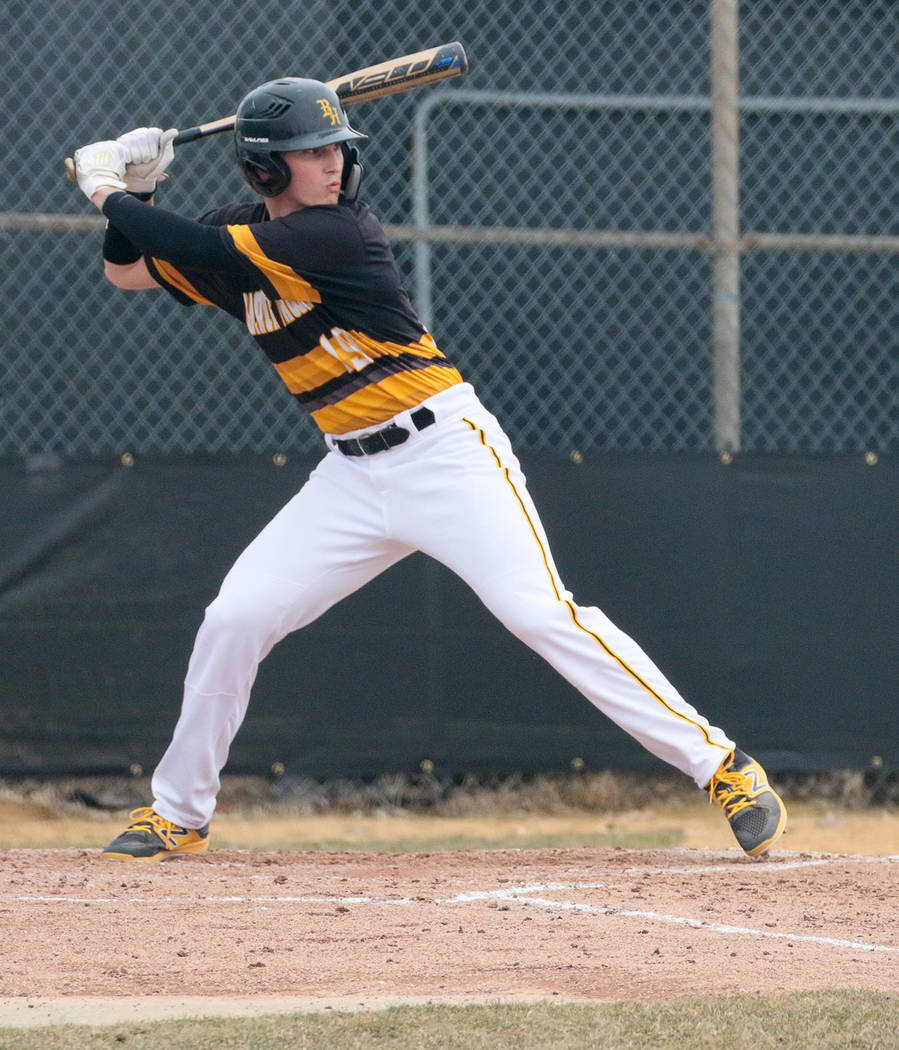 Special to the Pahrump Valley Times Parker Hart's baseball journey has taken him from Pahrump to Moline, Illinois, to Palm Springs, California, and now to Mesa, Arizona, where he will begin playing for the Benedictine University, Mesa, Redhawks this year. 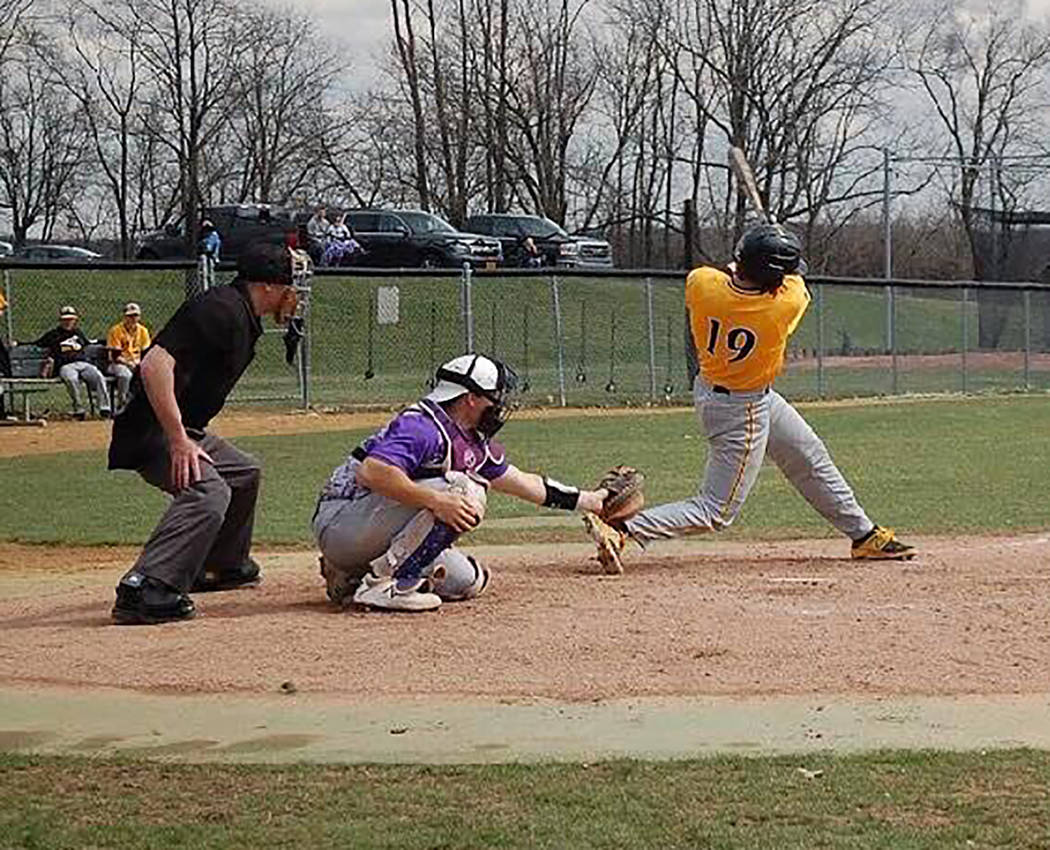 Special to the Pahrump Valley Times Former Pahrump Valley High School baseball player Parker Hart, shown at bat for Black Hawk College in Illinois, will transfer to Benedictine University, Mesa, in Arizona and play for the Redhawks with three seasons of eligibility remaining. 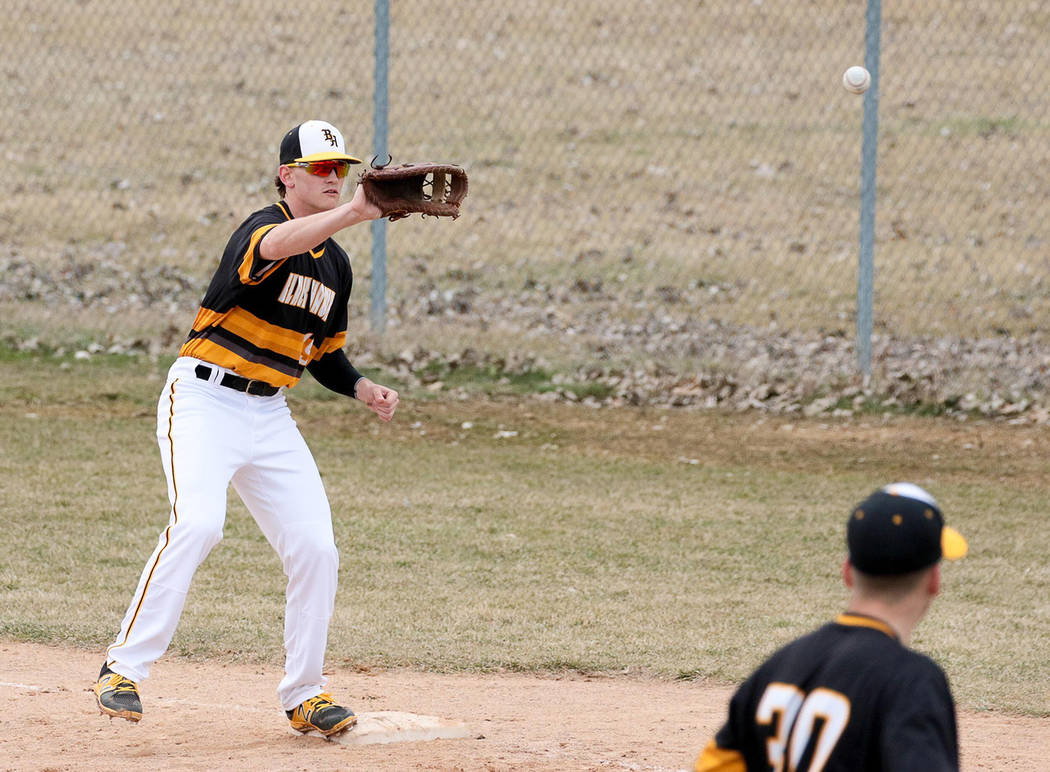 Although he had to deal with a major setback, in the end, the spring season could not have worked out better for Parker Hart.

The 2017 Pahrump Valley High School graduate went into his sophomore season at Black Hawk College in Illinois eager to prove himself to baseball coaches at four-year schools, and he started well. He was hitting .326 with 3 doubles, 8 RBIs, 10 runs and a .404 on-base percentage through 46 at-bats.

Then his season stopped.

“I was only able to play in 15 games this season because I was out with a torn ligament in my greater toe,” Hart said. “The field we were playing at had grass baselines. And I was running out of the batter’s box and stepped on the lip of the grass wrong. It hyperextended my toe.

“I was in the starting lineup before I injured it. Thankfully, I was able to receive my medical redshirt for the injury.”

Hart was forced to watch from the sidelines as the Braves went 26-20. He could have used his redshirt for another season of junior college baseball, but he announced June 4 on Twitter that he would be transferring to Benedictine University, Mesa, in Arizona to continue his academic and athletic career.

BenU Mesa, as it is commonly known, is a young institution, founded in 2013 as a branch campus of Benedictine University in Lisle, Illinois, which dates to 1887. It is the only four-year Catholic university in Arizona and is a member of the California Pacific Conference and the National Association of Intercollegiate Athletics.

Redhawks coach Brian McCabe is happy to have Hart in the fold.

“I really like the addition of Parker to our program,” said McCabe, who guided BenU Mesa to a 44-13 record, including 24-6 in the conference, in his first year as head coach. “He comes from a great junior college program in Illinois that prepares guys to come in and play the game the right way.”

The same now can be said for BenU Mesa, as the school had a player sign a professional baseball contract for the first time this month when pitcher Kyle Huckaby signed with the Toronto Blue Jays as an undrafted free agent.

The Redhawks were ranked in the Top 25 among NAIA schools for much of the season, and Hart is aware of what the program has accomplished in a short time.

“I enjoyed my time on my visit,” he said. “I really liked coach McCabe’s philosophy and the program he has. Also, I wanted to play for a competitive team and conference. The best major at BenU Mesa is the major I’m studying, so it fits academically as well. I’m a business major, but I haven’t decided if I want to pursue management or entrepreneurship.”

Despite the talent on the Redhawks’ roster, McCabe expects Hart to see playing time sooner rather than later.

“Parker’s level swing is something that caught my eye right away, and his ability to play first base and outfield will give the coaching staff a lot of opportunities to get him on the field,” said McCabe.

“He’s one of those I would call a self-made player,” Hayes said. “I don’t think he played Little League at all.”

“I played T-ball when I was 4 or 5, then I stopped playing in sixth grade,” Hart recalled. “Then I started playing again my freshman year.”

“We had his sister, Payton, as our manager, and we found out her brother was a left-hander and he was coming up to high school,” Hayes said. “So we were telling her every day, ‘You need to get your brother to come out.’”

Hayes said he and his staff tried to turn him into a pitcher, but he was wild.

“He didn’t have a natural left-handed throwing motion, but he could really swing the bat,” Hayes recalled. “He throws lefty, and he bats righty. We honestly brought him in to try and get him to pitch, but he just turned into our best offensive player his junior and senior year. He hit over .400 both seasons. You could just see he was going to play at the next level.”

About the only thing for Hart to worry about at this point is his toe, and he’s working on that.

“I’ve been going to physical therapy here in town with Dr. (Michael) Taylor,” he said. “It’s not 100 percent right now, but he’s been working with me to get it ready for my summer ball season.”

Hart will be playing in the Palm Springs Collegiate League in California. The league has been operating for 16 years and offers 25 games with resort housing, wooden bats and athletic training and clubhouse staffs. He is one of four Black Hawk players on the roster for the Bombers, who are off to an 0-2 start. The season runs through July 10.

“I just have to work hard and see where it takes me,” Hart said. “I don’t want to rush back. I don’t want it to be a lingering injury. I practice every day, just doing what I can do.”

After summer ball it’s off to Mesa, a suburb just east of Phoenix, where Hart will have three years of eligibility remaining with the Redhawks. His past and future coaches each see good things for him.

“He didn’t have any bad habits and was really coachable,” Hayes said. “He did what we asked him to do and turned into a really good baseball player. It’s a good story. A lot of people think other people will get them to the next level, but Parker is the epitome of someone who got there because of himself.”

“His injury this year slowed him down, but he put up great numbers anyway,” McCabe said. “We look forward to Parker being healthy so he can get his fall reps. I think he is about to explode onto the scene.”