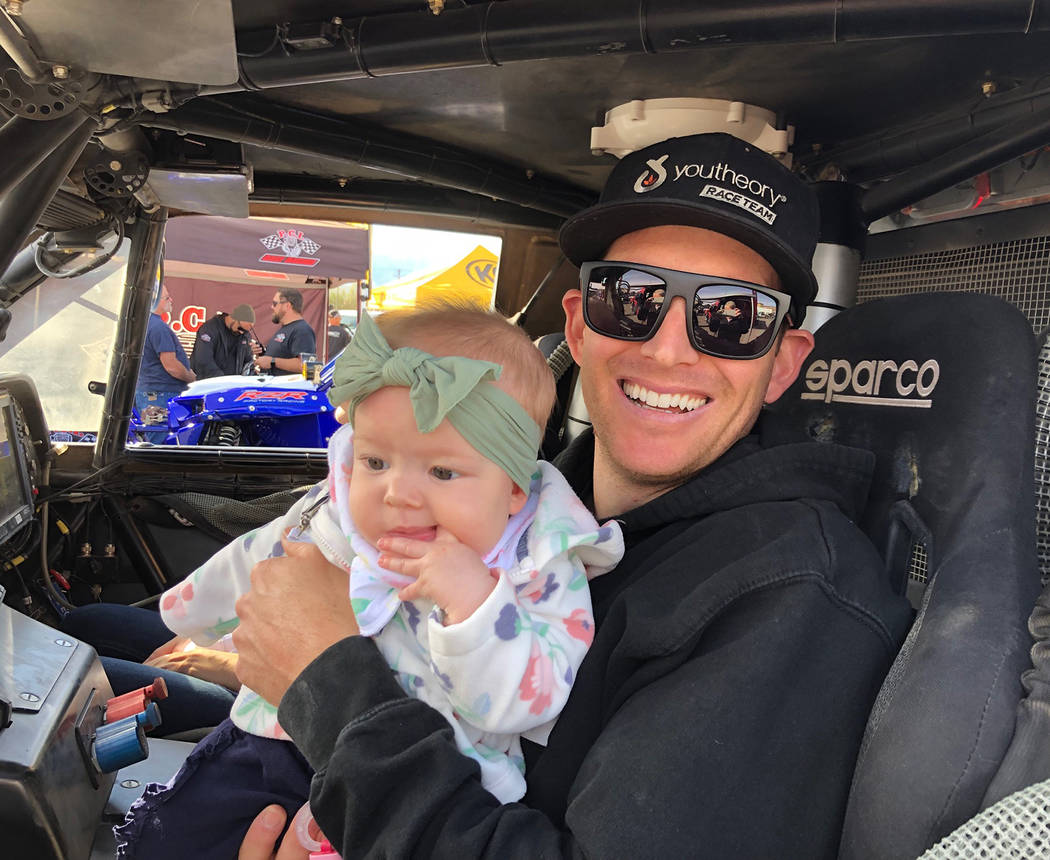 Tom Rysinski/Pahrump Valley Times Trick Truck driver Anthony Terzo of Irvine, California, sits Friday with his 6-month-old daughter Masyn while waiting for a technical inspection of his vehicle for the Pahrump Nugget 250. 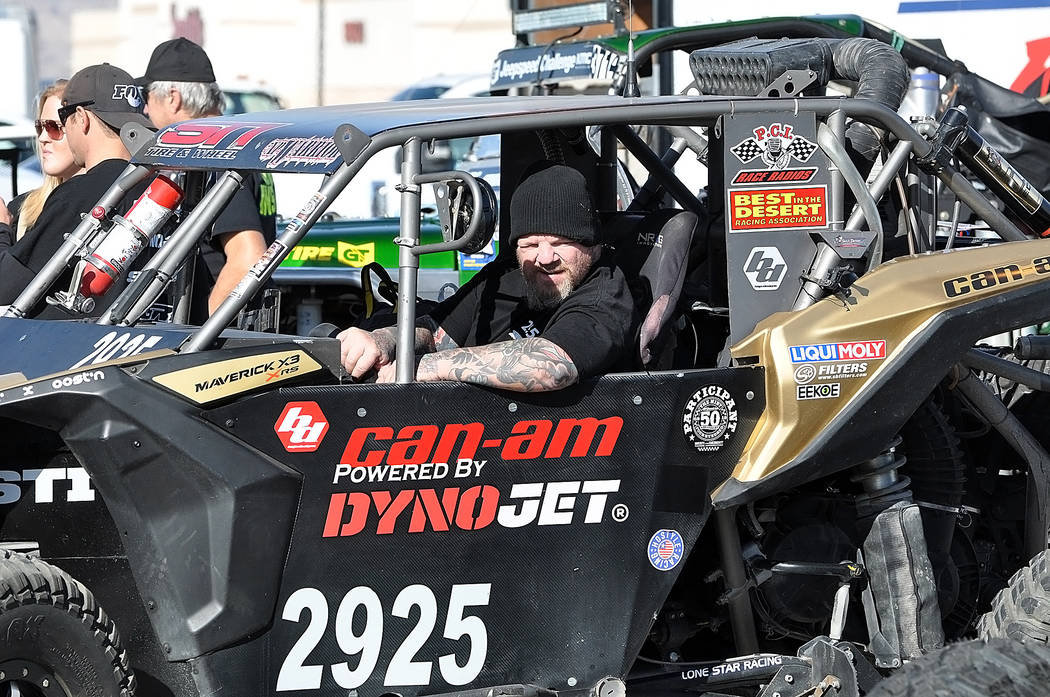 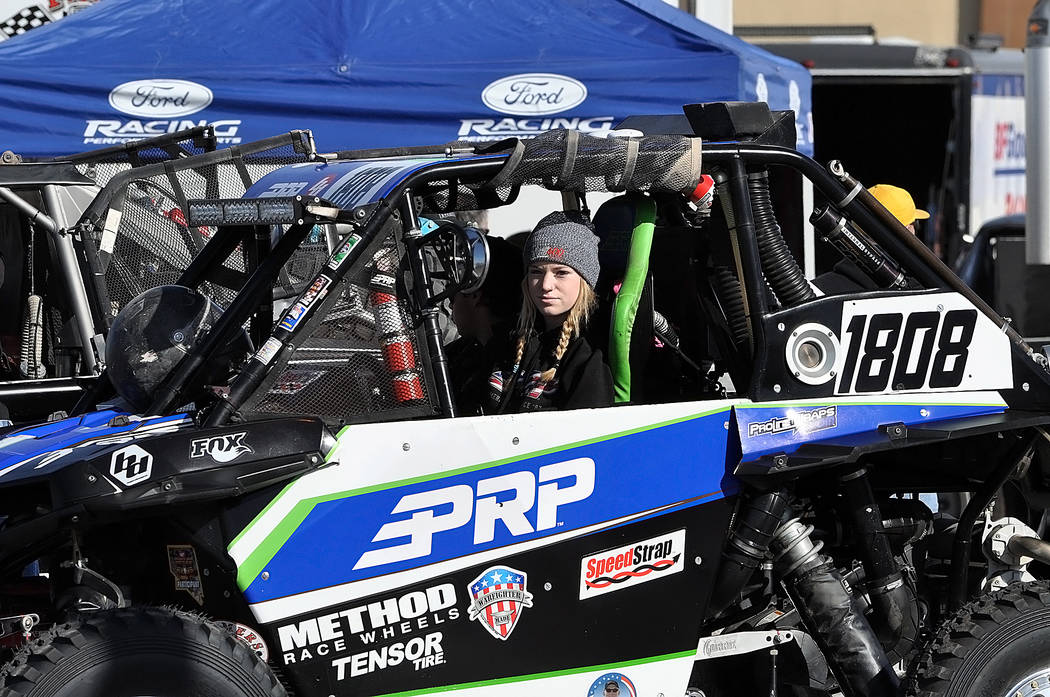 Horace Langford Jr./Pahrump Valley Times Madeline Wedeking of Temecula, California, in her P Class UTV, sits among dozens of drivers waiting for technical inspection Friday in the parking lot of the Pahrump Nugget.

Anthony Terzo sat in his Trick Truck on Friday, recalling his first unfortunate attempt at running the Pahrump Nugget 250.

“We were out here last year,” said Terzo, of Irvine, California. “I actually crashed pretty hard in qualifying last year, so I didn’t make the race.”

But this year, Terzo brought along a good-luck charm not available to him a year ago. Sitting in line for technical inspections in the Pahrump Nugget parking lot, Terzo had his 6-month-old daughter, Masyn, sitting happily on his lap.

“She’s been good so far and really enjoys being outside,” Terzo said. “I think she likes being around the races. She’s got these earphones that are specifically for the races. We put them on her, and she doesn’t mind wearing them.”

While Masyn was happily waiting for her dad’s truck to be inspected, just outside the parking lot plenty of people were waiting just to make a turn. Turning on and off Highway 160 required patience because of the increased traffic in front of the Pahrump Nugget, as roughly 3,000 visitors were expected in Pahrump for the race.

Although Terzo missed out on the Pahrump Nugget 250 last year, he did get a good look at the course in advance of Saturday’s race.

“We got to pre-run the entire course (Thursday), where everyone got to go out there and run the entire 250 miles and get a good look at the course,” Terzo said. “It’s a ton of rocks, a lot of places where you have to be real careful and go slow because you’re going to get flats, and also a lot of high-speed sections where you can go 130 miles an hour.”

Terzo was excited to tackle the course for Youtheory Racing, competing in the Trick Truck division.

“It’s an unlimited vehicle,” he explained. “That means this is the top class, basically anything goes … the best you can make it, the most travel, the most horsepower. So it’s got 32 inches of travel, almost 3 feet of travel, and it’s got 1,000 horsepower. It’s the ultimate vehicle for going through the desert.”

The Pahrump Nugget 250 was the sixth race his team has run this year.

“We don’t race the Baja races, so we’re able to make the full season of Best in the Desert,” he said.

Right behind him, Jeff Scott of SpeedLee Racing was in Pahrump for the first time.

“We’ve run every Best in the Desert race besides this,” said Scott, of Odessa, Texas. “We bought this truck back in July, and we’ve done a few races back home in Texas.”

While Terzo was going to compete in a Trick Truck, Scott’s SpeedLee Racing vehicle had more specific limitations.

Scott’s team has been racing off-road since 2010, although this is their first season driving a truck.

Terzo and Scott were waiting for technical inspections Friday in a very crowded Pahrump Nugget parking lot. With race organizers and vendors on both sides of them, the drivers waited as the line snaked through the lot.

Of the 147 drivers who entered the race, 36 did not finish. The race is not scheduled to return to Pahrump in 2019.