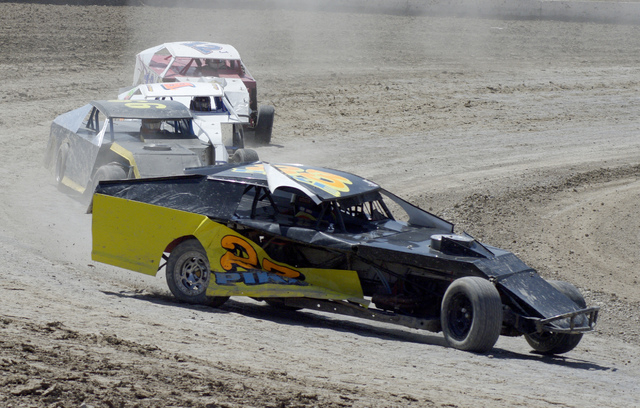 Las Vegas has NASCAR and Pahrump has the “Day After the Duel.” This weekend is a big race weekend at the Pahrump Valley Speedway with two big events scheduled.

To get the weekend going, the speedway opens on Saturday with monster trucks showing off for fans at 7 p.m. The show will feature the Monster Jam World Champion “Bounty Hunter” and “Iron Outlaw” This will also run with tough truck and quad competitions. And if that doesn’t get you going, the show brings in “Raging Inferno,” the Jet Fire Truck Melt-Down Show, where a jet engine actually melts trucks.

Then on Sunday at 3 p.m. the serious racing starts. This would be the second annual Day After the Duel. Last year track owner, Chad Broadhead started this race and it was highly successful.

He designed the race to catch those racers who didn’t get enough race action by racing at the Las Vegas Motor Speedway’s “Duel in the Desert” on Saturday. He said it was the perfect way to catch racers from out of town.

The Duel in Las Vegas attracts 200 International Motor Contest Association (IMCA) Modified racers and is one of the biggest dirt track events in the country with a prize of $7,777. The event is a 40-lap race and is done in heats over three days. After the Duel will also be a 40-lap race and offer a prize of $1,500. In addition to the IMCA Modified racers, there will also be Super Stocks, Mini Stocks and Sport Mods too.

“This year nothing will change except for the number of cars. We expect more, but other than that the prize money is the same,” Broadhead said.

Jon Broughton, the new race director for the Pahrump Valley Speedway, believes this Sunday the track should see double of what they had last year.

“This Sunday will be a big race for us,” he said. “We are actually expecting 50 Modifieds instead of 20. We have a lot of racers interested and a lot of people calling.”

Tickets for the races and Monster Trucks can be bought for $10 for adults, $8 for seniors and $6 for children. For more pricing on the tickets see Pahrumpvalleyspeedway.com. Go to Car Quest Auto Parts for advance tickets.