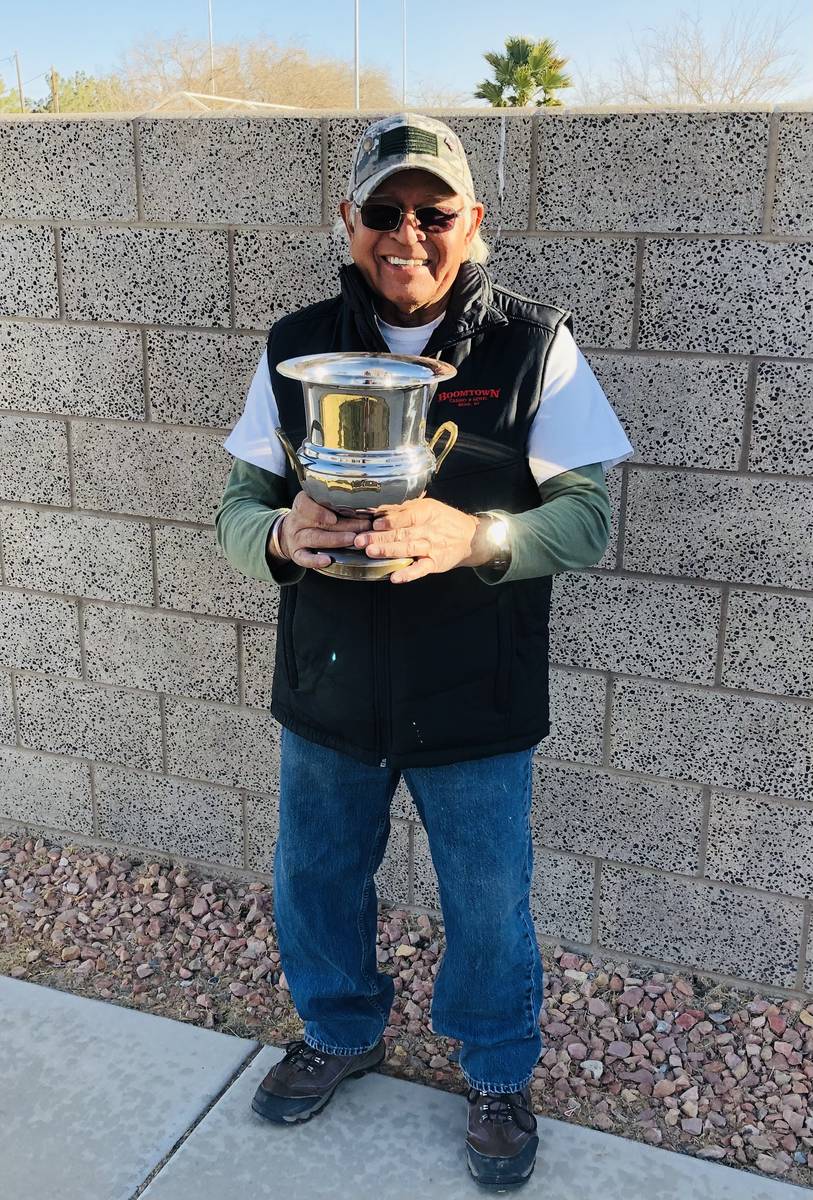 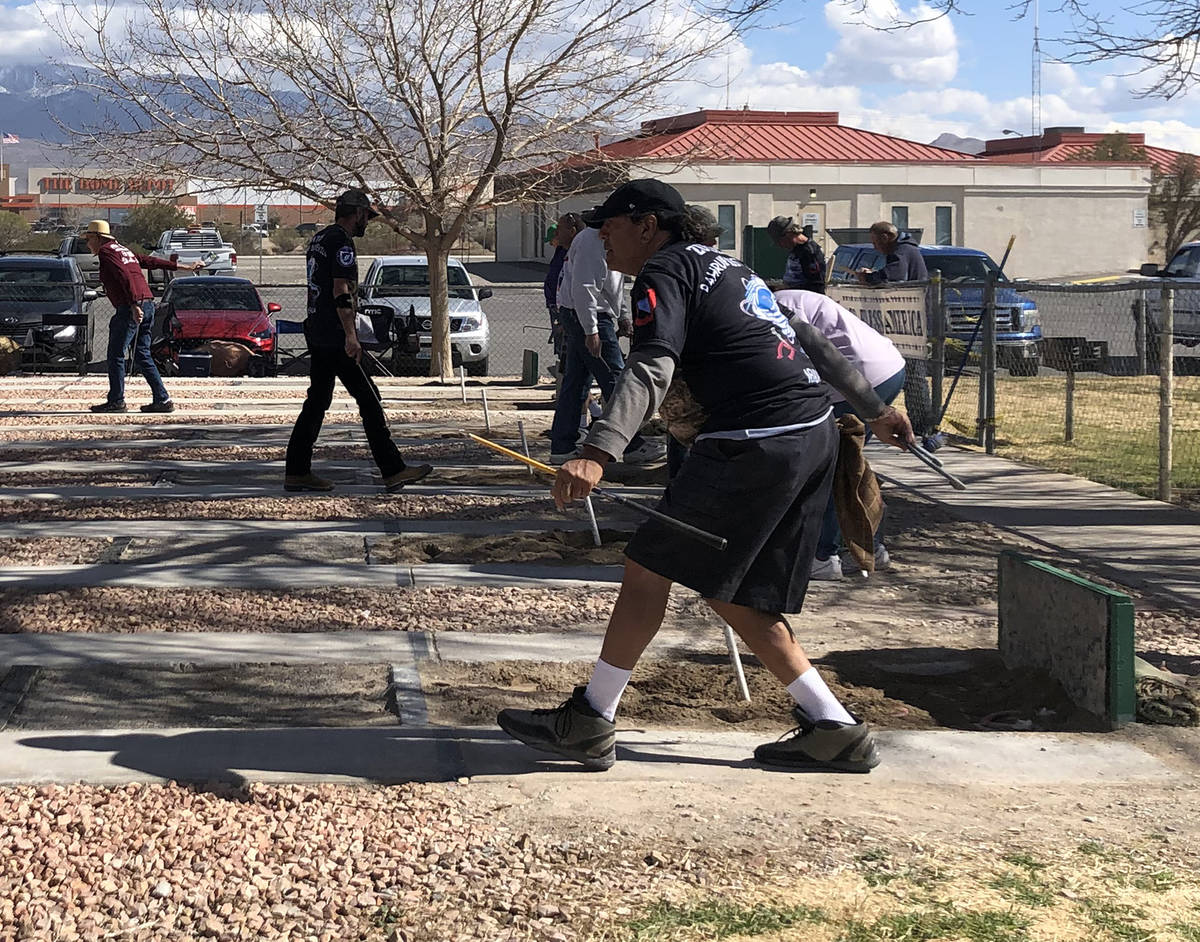 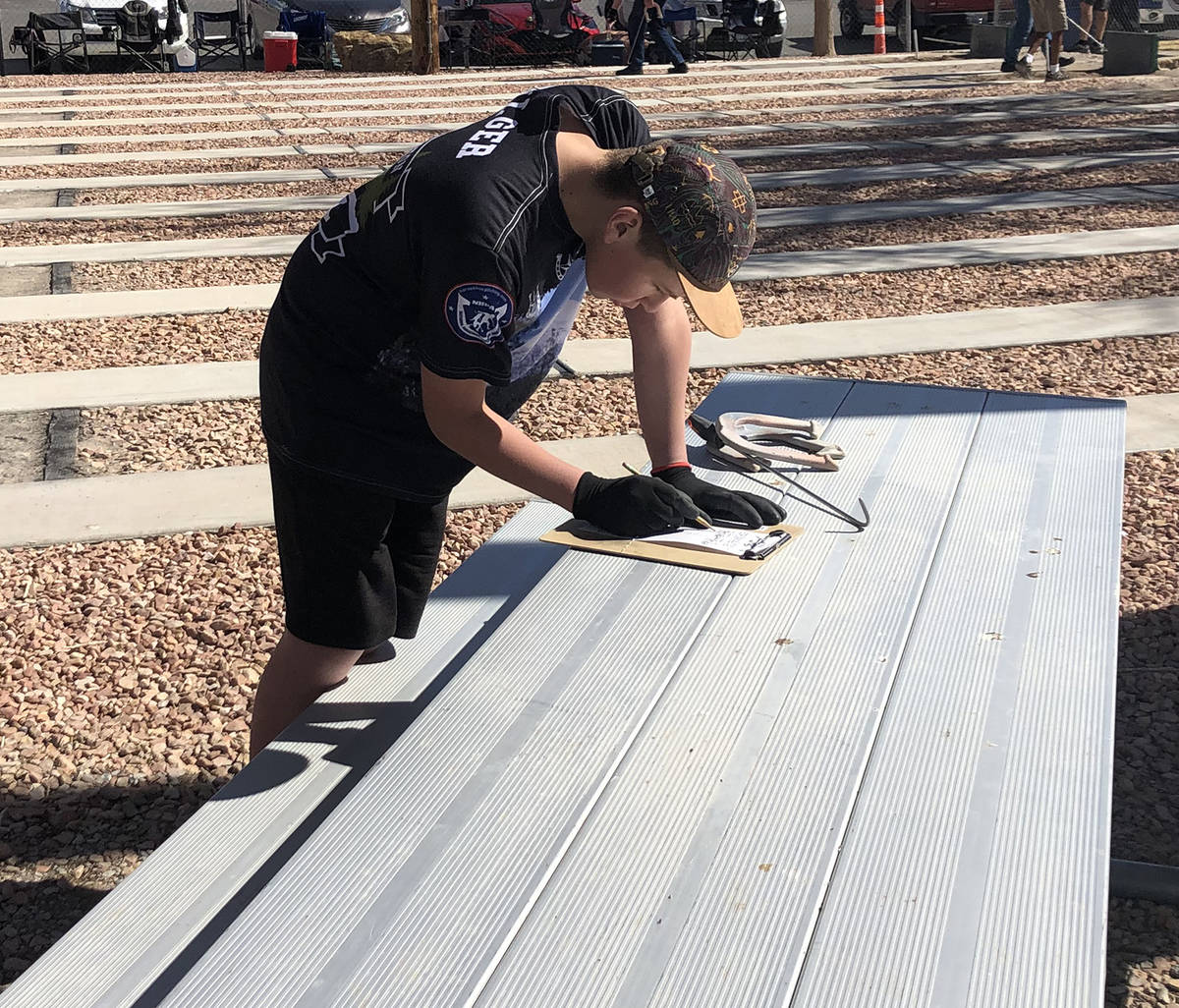 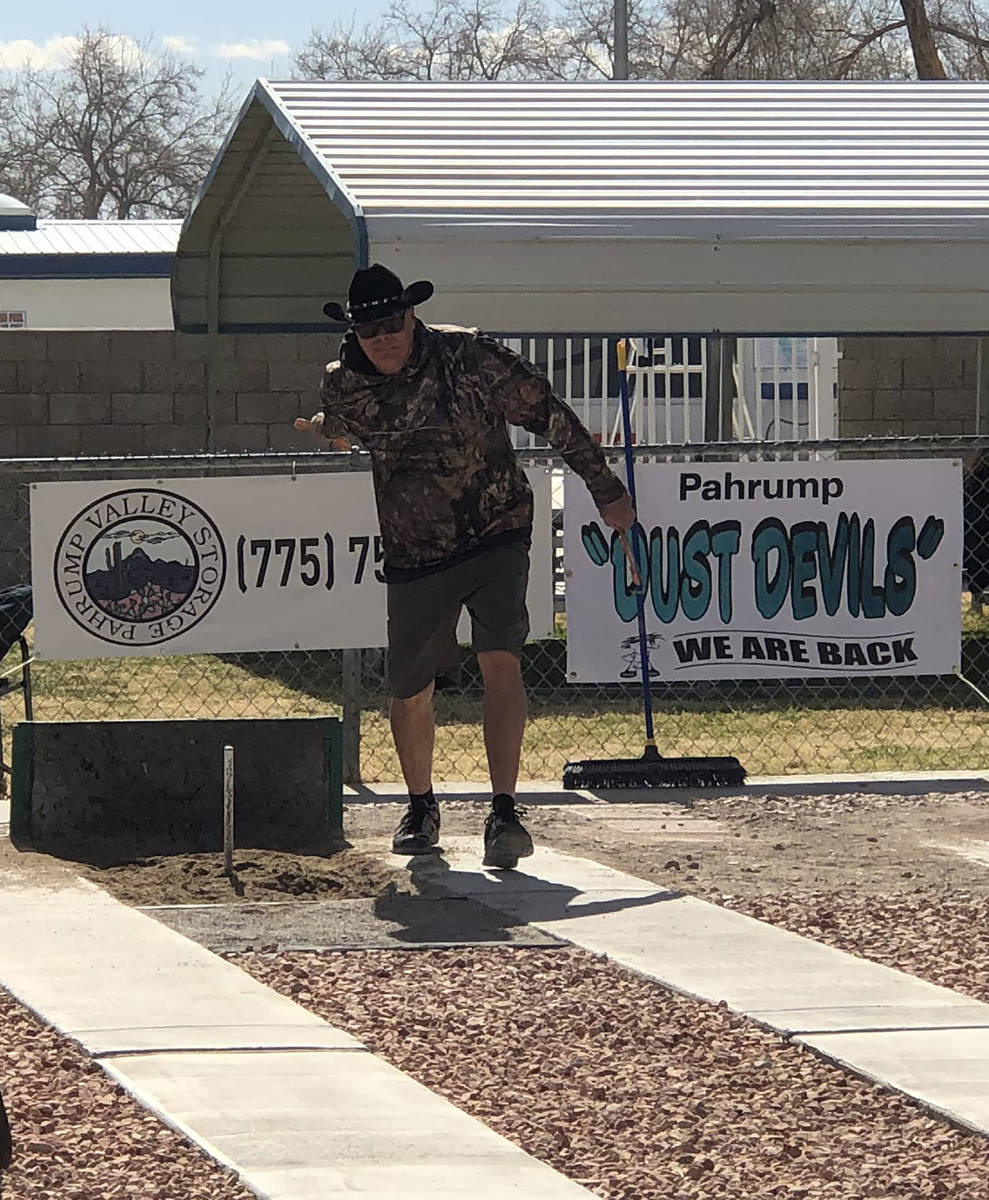 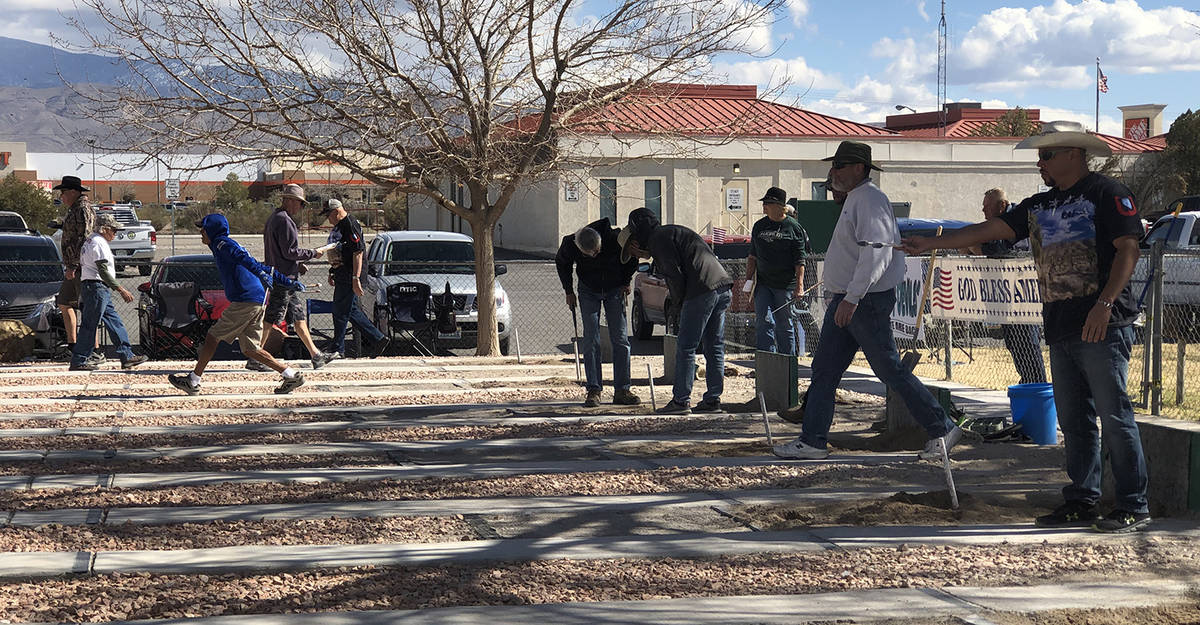 While the festival was canceled because of COVID-19, the horseshoes tournament went on as planned, and Escalante won Saturday’s singles tournament and teamed with Fay Dumont to win Sunday’s nonsanctioned doubles event.

Horseshoes tournaments are getting larger all the time; this one brought 26 pitchers for the singles event — eight each in Class A and B and five each in Class C and D — and 24 for doubles. The crowd was too much for the six-pit venue to handle, according to Nevada State Horseshoe Pitchers Association President Lathan Dilger.

“We had to turn three players down,” Dilger said. “There just weren’t enough horseshoe courts so we had to double up. We’re in the same situation in Vegas. They only have nine horseshoe courts, and we had 29 players two weeks ago for the Ice Breaker Open and had to double-up for a singles match. It’s not supposed to work like that.”

But Dilger has hopes of an expanded site for horseshoes that not only would make the growing tournaments easier to run but allow Pahrump to host larger events, such as the state championships.

“It’s not the town of Pahrump’s fault,” he said. “We are just growing at a fast pace. I plan to meet with the town manager on a site at Petrack Park where we can expand our horseshoe courts. We need at least 12 courts.”

The Pahrump Valley Days tournament drew pitchers from Oregon, Arizona and Utah as well as Henderson, Las Vegas and Mount Charleston, Dilger said. Escalante came down from Reno, bringing an impressive ringer percentage of 48.75 with him.

But Bob Swain is the favorite in any tournament he enters. Swain, a native New Englander who lives in Bullhead City, Arizona, has won a division title at the world championships and was hitting ringers on 63.42% of his pitches going into the weekend.

He did lead the Pahrump Valley Days tournament in ringers with 145, but he was more than 11 points below his entering percentage and wound up tied for the Class A lead with Escalante with a 6-1 record. Because Class A is handicapped — Swain’s was 0 while Escalante’s was 14 — the tie was broken by total points, with Escalante holding a 345-315 advantage.

A playoff often settles ties, but the windy and cold conditions led tournament director Sara Gurgol to opt against one. Only four pitchers topped their entering ringer percentage in the blustery conditions.

One of them was Pahrump’s James Hatch, who went undefeated for the second consecutive tournament to capture the Class B title. Hatch’s total of 111 ringers was better than everyone except Swain and Escalante, and his 261 points were 87 ahead of anyone else in his division.

Class C went to Rai Adams, who went 4-0 with 21 ringers and 95 points, and Mike Dedeic won Class D in a tiebreaker over Gary Dilger. Each went 3-1, but as Classes B, C and D are not handicapped, the tiebreaker is total ringers, and Dedeic held a 16-15 edge.

Unlike the singles, which used the standard 40-pitch game, in the doubles tournament each game was played to 40 points, which Dilger said is another scoring method sanctioned by the National Horseshoe Pitching Association.

Between the large turnout and the fact the tournament went on at all in a year that has seen other tournaments taken off the schedule, Dilger was pleased with the weekend.

“I would like to add my thanks to the Pahrump Valley Days organization — Doug Dubin, Brigitte Dubin and Hunter DeMarais — and the town of Pahrump and county commissioners for letting us hold our tournaments,” he said. “Sara Gurgol did a fantastic job this weekend, and thanks to all the players and families that brought pot luck lunch both days.”

“I’d also like to thank Mike Nicosia,” Dilger added. “He was co-director Saturday and provided professional scoreboards for Sunday’s doubles.”

Next up for Southern Nevada’s horseshoes pitchers is the Spring Fling on March 6 at Leavitt Family Park in Las Vegas.