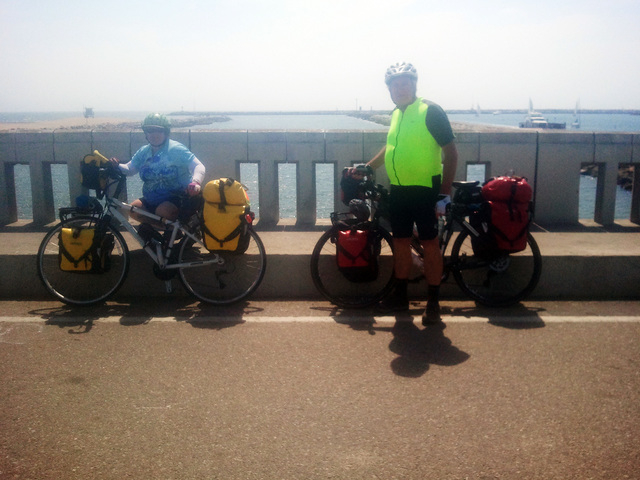 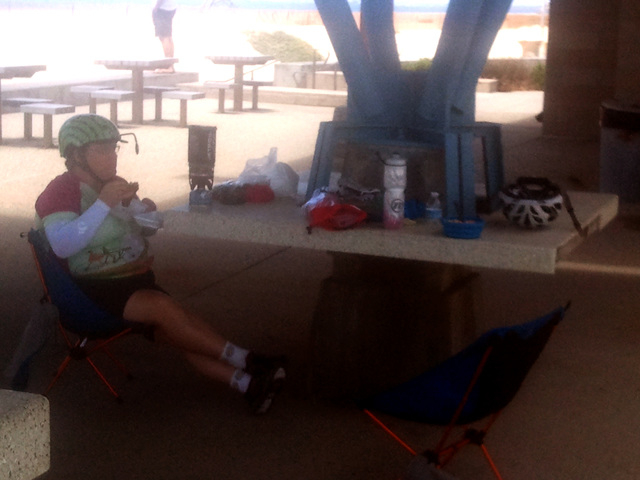 Two strong friends in faith from Pahrump, Bill Lewis and Arika Ostr0m, will be cycling through the four corners of the United States starting on Jan. 1. The trip should last a year.

Lewis is a 60-year-old retired San Bernardino Firefighter captain and Ostrom is 47 and self-employed.

Kelly Garcia, a friend, knows Lewis through church and thought it was just an amazing thing to do.

“Bill does music at our church, Finished Ministries in Pahrump, and told us about a month ago that he was going on this trip,” Garcia said. “He is putting everything away so he can go on this trip. Who does this? He is in charge of our music and he is so talented. I never knew he rode so much.”

Lewis said it will be an adventure of a lifetime and a chance to connect with his friend that he calls “sister.”

“Primarily it was Arika’s idea,” Lewis said. “She is my sister in Christ. I just turned 60 and my sister is 47. I am a retired fireman. My sister is self employed and works for Mary Kay is taking some time off.”

Ostrom said the two friends got to know each other after Bill’s wife died at a home Bible study and she was divorced.

“I connected five years ago with my brother ( and she calls him brother) after his wife died. If it hadn’t been for my brother I would be homeless right now. So I am just truly grateful,”she said.

She said the trip came about while chatting on Facebook with another cyclist and the next thing she knew she was buying trail maps.

“I was talking to someone who had only 14 more states to go through and he would have traveled through all the states,” the beginning cyclist said. “I asked him to show me a map and he did and I saw all these lines on his map in an Adventure Cycling Magazine and I asked him what they were and he said those are bike trails.”

Ostrom said without her friend Lewis, she would never had done this trip.

She said Lewis was the only one she felt safe enough to make the trip with.

“I am still a beginner cyclist,” Ostrom explained. “I have done a few small trips. We did a week down the coast last April. Why not now?”

The two have taken small bike rides together to prepare for the trip. “Training wise, I have done five short trips,” Lewis said. “The longest was a month long. She has done two trips that have been a week long. The longest trip I have done was 1,000 miles.”

The trip is called “All Four Corners of the Continental United States and then Some.” The ride will start in Wickenburg, Ariz. and the two are using Adventure Cycling for the route. From there they will head to Florida, and from Florida up to Maine. The team will then shoot across the United States to Washington and down to San Diego and back up to Pahrump.

“The cost will be minimal,” Lewis said. “We will be camping most of the time. We will do the motel rooms once a week or every other week. We will be staying in host’s homes for warm showers.”

There is an organization called Warm Showers (warmshowers.org.) and they provide support across the world for bicycle tourists. They offer a warm shower and a place to sleep. All you do is call and make arrangements and they open the house to you. He said they will be hitting small markets along the way and cooking most of their food.

The two will be carrying all they can carry on Pannier bags for the bikes. The bags sit on either side of the tires and can weigh up towards ninety pounds when all four bags are filled.

Lewis says that the average touring bicyclist burns about 6,000 calories a day.

“We are both out of shape and plan on getting in shape,” he said. “I am a diabetic and have gotten a little overweight. I want to take some weight off. She wants to lose a little weight to get in shape. We will plan our meals around that. In previous trips and talking to other people who have made trips like this, pretty much whatever appears before you gets eaten.”

The two don’t anticipate any medical emergencies that Lewis will not be able to handle. Lewis was a medic with the fire department. In addition, they will have some pretty interesting technology called SPOT. It has a satellite transmitter and is a messaging device which allows them to contact people if needed and fits in the palm of your hand. It also has a 911 feature. Press one button and you have help coming.

Lewis and Ostrom will also be riding the latest touring bikes. Lewis rides a Scott touring bike which is equipped with disc brakes and high tech tires. The tires are called Gator Skins from Continental and are kevlar-puncture resistant tires, which are rated for 4,000 miles. Ostrom will be riding a Marin and both bikes are made from aluminum.

Another interesting bike accessory the two will be using are Camelbaks. Camelbaks allow the riders to go drink water or any type of drink hands-free. The traditional Camelbak straps to your back and has a long straw-type mechanism which is used to draw fluids.

All the gear and the bike is about 90 pounds for Lewis and Ostrom will be carrying about 75 pounds.

“We have no problem carrying the stuff and you really don’t notice it until you come to hills,” Lewis said. “We anticipate on doing 50 miles a day. That will be the minimum. There will be times that we do 80-100 miles a day. If we get a tailwind we can easily make a 100 miles a day.”

The two hope to cross about five major mountain ranges on the trip.

On the top of the list to see for both of them is the famous bridge in Mackinaw. The bridge goes to Mackinac Island and there Ostrom wants to see the Grand Hotel. That is where the movie starring Christopher Reeves, “Somewhere in Time”, was filmed.

Ostrom had seen a Discovery TV show about the bridge and has been fascinated about its construction ever since.

“It is the most unusual and scariest thing we want to do,” Ostrom said. “This bridge is in the state of Michigan. It sways. I forget how many feet. About ten years ago, high winds blew a Hugo off the bridge.”

It is one of the tallest bridges in the United States. Ostrom says she is afraid of heights.

“I want to ride my bike over that bridge,” she said. “They normally don’t allow bikes except a couple of days during the summer if the weather is nice. If I can’t ride my bike, then I will rent a car and drive over the bridge.”

Ostrom said the whole trip has not been too overwhelming.

The two plan on emailing the PVT on this grand adventure so this will not be the last you hear from these two.