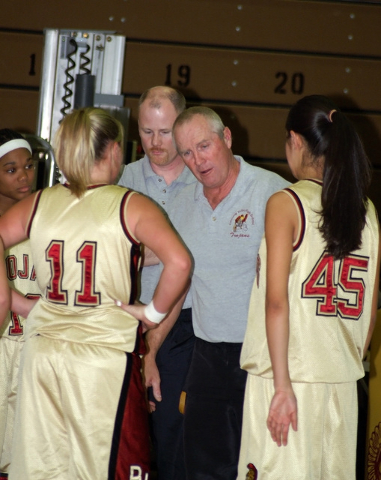 Trojans coach Bob Hopkins, who already coaches girls and boys golf, will be returning to the basketball court after an eight-year absence.

Hopkins left girls basketball after the 2008 season and after coaching girls basketball for 13 years in Pahrump. Hopkins has a total of 25 years of experience coaching basketball. He spent 12 years coaching in South Dakota before he came to Nevada.

“I am really excited to return to basketball and feel really good about it,” Hopkins said. “I will also continue to coach girls golf and boys golf because at this point it keeps me young.”

Hopkins will replace Jennifer Hagstrom, who resigned as coach at the end of the year. Hagstrom had been an assistant for Hopkins for two years prior to taking over the girls program.

According to Trojans athletic director Ed Kirkwood, it was a hard decision to leave.

“She had told me that she might be going,” he said. “It was something she was torn about, but she finally made her decision at the end of the year.”

Hopkins was responsible for taking the girls to two state championships in 2004, and 2005, when Pahrump was a Class 3A school. From 2000 to 2008, the Trojans girls team made seven state tournament appearances.

At the moment, the girls have open gym, on Tuesday and Thursday from 7:30 p.m. until 9 p.m. and Monday through Thursday from 7 a.m. to 8 a.m. for shooting. The coach said he had 11 girls out for the open gym.

Before the coach even decided on coming back to coaching basketball, he spoke to his assistant coaches.

“I had some assistant coaches in my mind,” he said. “I am waiting for the district to announce the coaches’ names. I am surrounding myself with young energetic people that know basketball and that care about the Trojans.”

The coach said he wanted the job to help turn the girls basketball program around.

“When they interviewed me, I told them I think I can make a difference,” the coach said. “We need kids, parents and a community effort to turn this thing around. It won’t just be me.”

The coach said he will not be taking athletes from other programs.

“I am a firm believer that we can turn basketball around with our athletes playing more than just one sport,” Hopkins said. “Kids can play three sports. I think it’s better for them if they do. When I have open gym in the fall, I will allow other athletes to shoot only if they want to shoot while playing soccer, volleyball and golf but I won’t let them run because I don’t want them to get hurt. The more sports they play, the better.”

“We will never have the athletes that Las Vegas has, but we can compete and have better fundamentals, and shoot the ball better,” he said. “We will come out and play an aggressive man-to-man defense.”

Hopkins also praised the size of the girls team.

“We do have good size,” Hopkins said. “We have some big girls out. I think we will be OK.”