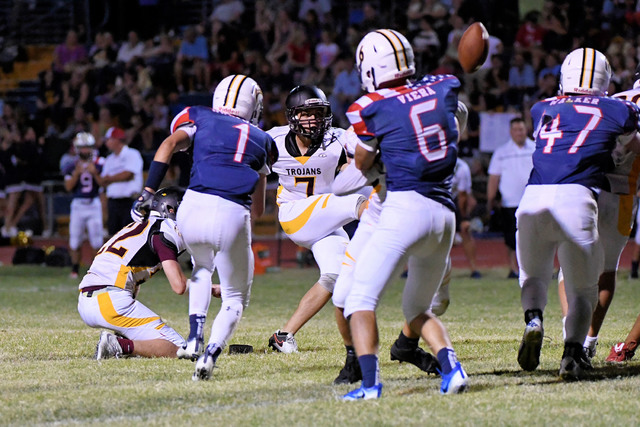 On Jan 19, the Nevada Interscholastic Activities Association granted independent status to Boulder City’s football program at its meeting in Reno.

According to Boulder City football coach Chris Morelli, the school decided to go independent to preserve its football program after finishing 1-8 the last two seasonsr. The team currently is a member of the Sunrise League, a Class 3A, composed of Del Sol, Moapa Valley, Chaparral and Virgin Valley.

“I couldn’t be happier with the outcome,” said Morelli, who will be entering his third season atop the program, to the Boulder City Review. “This is the first step toward rebuilding our program and sustaining success. Our independent schedule gives us a chance to start playing the teams that we played in years past. We’re just looking to level the playing field.”

They would play smaller schools, like Moapa Valley and Virgin Valley, and they will continue to play Pahrump Valley.

“We’re not looking for any special treatment,” Morelli said to the Boulder City Review. “We just want to play schools with identical class sizes. When the NIAA pushed several 4A teams down into our division, they did so to help rebuild their programs. Now we need help rebuilding ours.”

“I’m hopeful our move for independence has an outcome on participation,” Moore said to the Boulder City Review. “There have been injury concerns with parents the past few years, given the schedule we play. The past two seasons, we’ve played varsity teams that double our roster size, putting us at a disadvantage. Hopefully, this is a step toward getting more players on the field.”

The change means that Boulder City would not be eligible for postseason play, but Morelli, who has been with the program for eight years, believes that the time is not about state championships.

“It has to be about building the program with sustainable numbers,” Morelli said to the Boulder City Review. “At the end of the day, what we do is for the kids.”

According to Trojans Athletic Director Larry Goins, this realignment for Boulder City would only be for one year.

Trojans head football coach Joe Clayton does not believe this is the right solution for Boulder City.

“I understand that Boulder City’s student population numbers are down, but so are Moapa’s (comparable to Boulder City’s) and they still compete at an extremely high level,” Clayton said. “I was the offensive coordinator when we got beat up for years playing with Bishop Gorman in our league and we never went independent. We took our lumps and kept coming until we established ourselves. It was a long road but we did it with what we were dealt.”

Clayton feels schools should seek parity in the league and not go independent.

“So the major problem I have with being able to apply for independent status is that every time a program falls on hard times they will choose the easy way out,” he said. “We have a 1,200 student population but we are still half the size of all of the schools we play and we have a small pool of athletes compared to our student population.”

Goins, who also coached football for the Trojans, feels it is “contrary to what the rubric and competitive balance for realignment is all about.”

“Hopefully the new realignment proposal to create a fifth class will help reduce the problem.”

The fifth class that Goins is talking about is in the proposal stage. If approved, it would create a fifth level of competition, which will further level the playing field. There would be the fifth level for the Bishop Gorman schools, and then there will be the fourth level for the average schools and the third level for schools much more like Pahrump Valley, with smaller student populations like Moapa Valley and even Boulder City. But again, that level needs to be approved.

The realignment committee for the NIAA is meeting today and on their agenda they will talk about realigning just for football and not the entire league. If approved, according to Goins, this could be ready for 2018.

“The NIAA has a history of doing this for schools but they are against having our sports be aligned by sport,” Goins said. “There are some economic disadvantages to doing that.”

When you align by just sport this could incur higher bus transportation costs for schools, Goins explained.