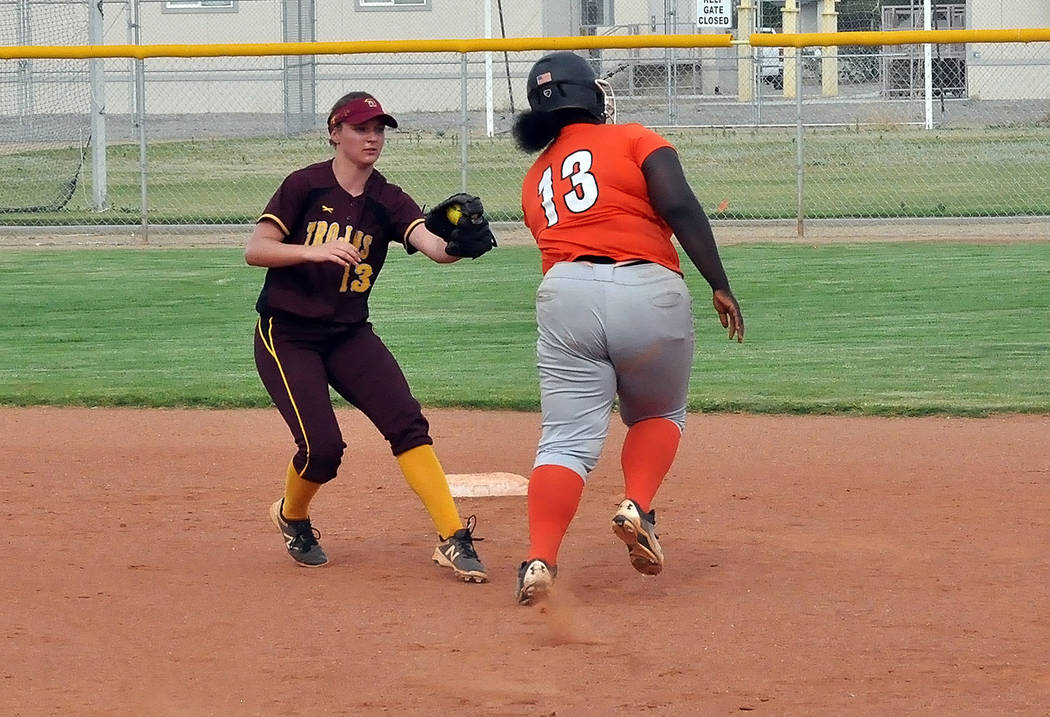 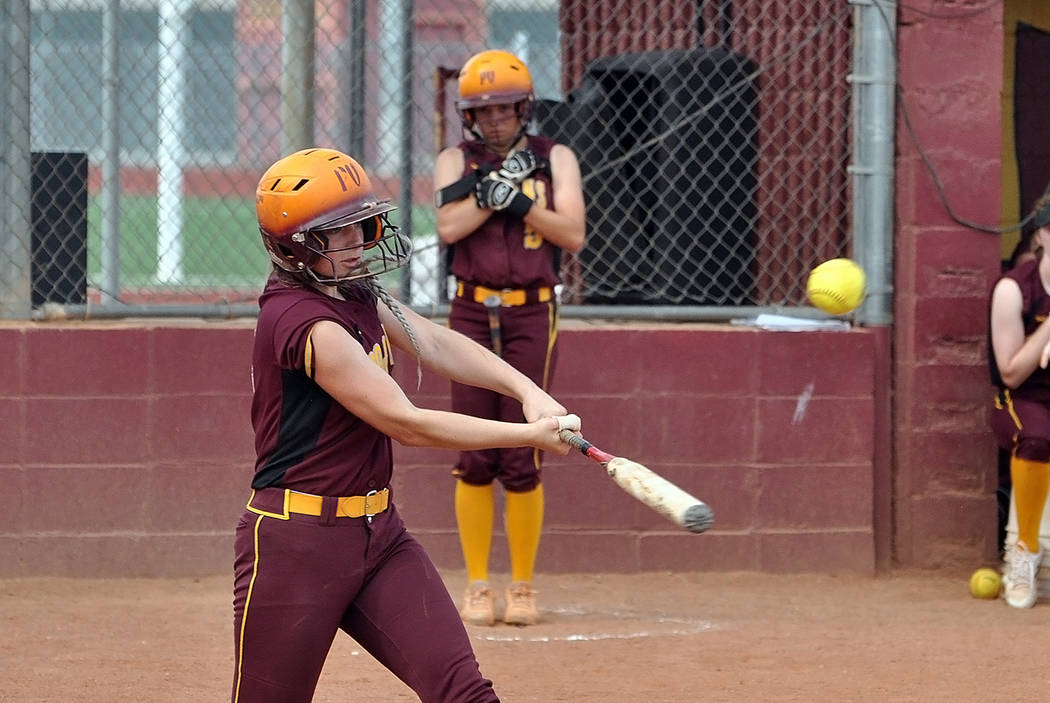 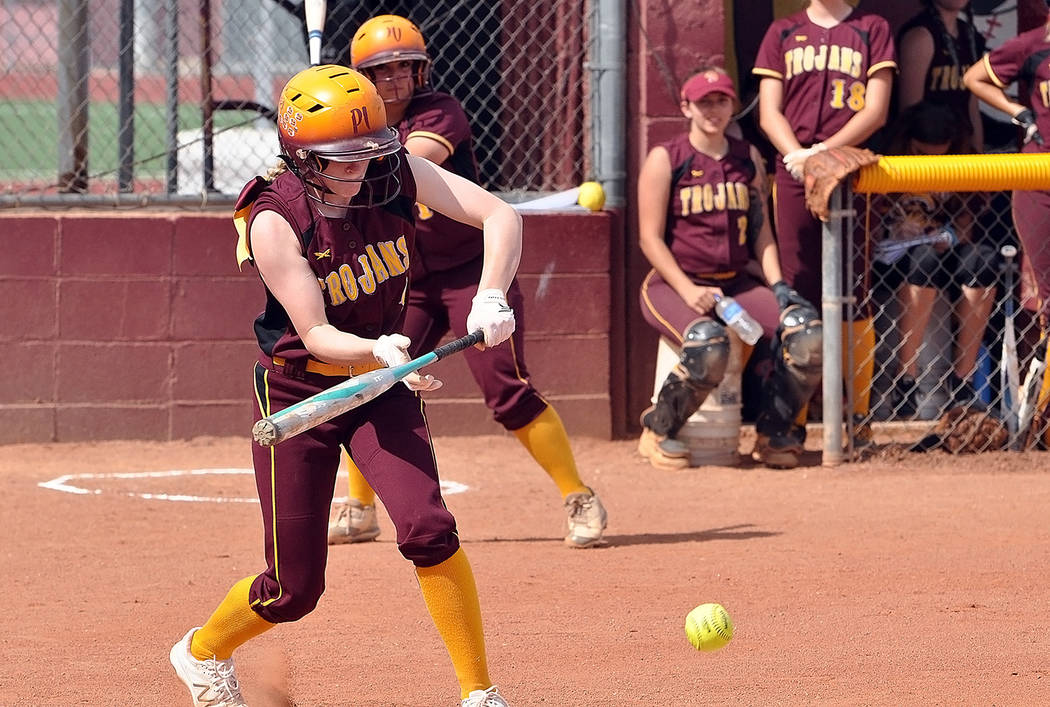 Horace Langford Jr./Pahrump Valley Times Evandy Murphy lays down a bunt during Pahrump Valley's 3-1 win over Chaparral in the Class 3A Southern Region softball tournament on Tuesday in Pahrump.

Boulder City and Pahrump Valley played one of the best softball games of the year back on April 3, when a dramatic three-run seventh-inning home run by the Eagles’ Summer Coyle sent the Trojans to a 3-1 defeat.

On Wednesday, with far more on the line, the sequel was not nearly as good as the original.

Visiting Boulder City, the No. 2 seed out of the Sunrise League, outhit, outpitched and outdefended the Trojans in a 15-3 rout Wednesday in the second round of the Class 3A Southern Region Tournament in Pahrump.

The loss leaves the Trojans (24-9) with no margin for error in the double-elimination tournament, which will wrap up Saturday in Boulder City.

“We have to win three in a row to get to the states,” Pahrump Valley coach Eli Armendariz said.

The first two wins will get the Trojans into the losers’ bracket final Friday, where either Sunrise No. 1 seed Moapa Valley or Boulder City will await. A win there would guarantee a trip to the states regardless of what happens Saturday, as the top two teams in the region advance.

The Trojans, who played solid defense down the stretch, fell apart in the field Wednesday.

“We had 12 errors,” Armendariz said. “That’s an extra four innings right there. We played seven innings, and they played 11.”

And the Eagles made the most of their extra outs.

“They hit the crap out of the ball,” said the coach. “We put ourselves in a hole and couldn’t get back out of it.”

Bailey Bennett-Jordan was not as dominant as she was in the first game against Pahrump Valley, allowing 10 hits, although three errors meant none of the three runs was earned.

But the Boulder City offense combined with the Pahrump Valley defense was far too much for the Trojans.

“Their third baseman (Lily Osman) hit two home runs off of us today,” Armendariz said. “Other than that, the rest of the kids were just hitting singles, but a couple of bases on balls and the errors, and that was it.”

The Pahrump Valley offense put runners on base but couldn’t push many across.

“Jackie Stobbe was crushing the ball for us today,” Armendariz said. “Amaya (Mendoza) hit a home run, and Allyson Rily went 2-for-4 with a double.

“They were fighting until the end. The feeling was, ‘they think it’s over, let’s get out there and try and show them it’s not’.”

In the opening game Tuesday, Mendoza tossed four solid innings with no earned runs and doubled in a run as the Trojans took a 2-0 first-inning lead and held on for a 3-1 win over Chaparral.

Taylor Egan had a hit and an RBI for Pahrump Valley (24-8) while combining with Mendoza on a four-hitter.

Even though the Trojans’ backs are against the wall, Armendariz believes the team that won 14 of 15 games before Wednesday still has confidence.

“They sound determined to win the next one and the two after that,” he said. “We’ll see what happens.”