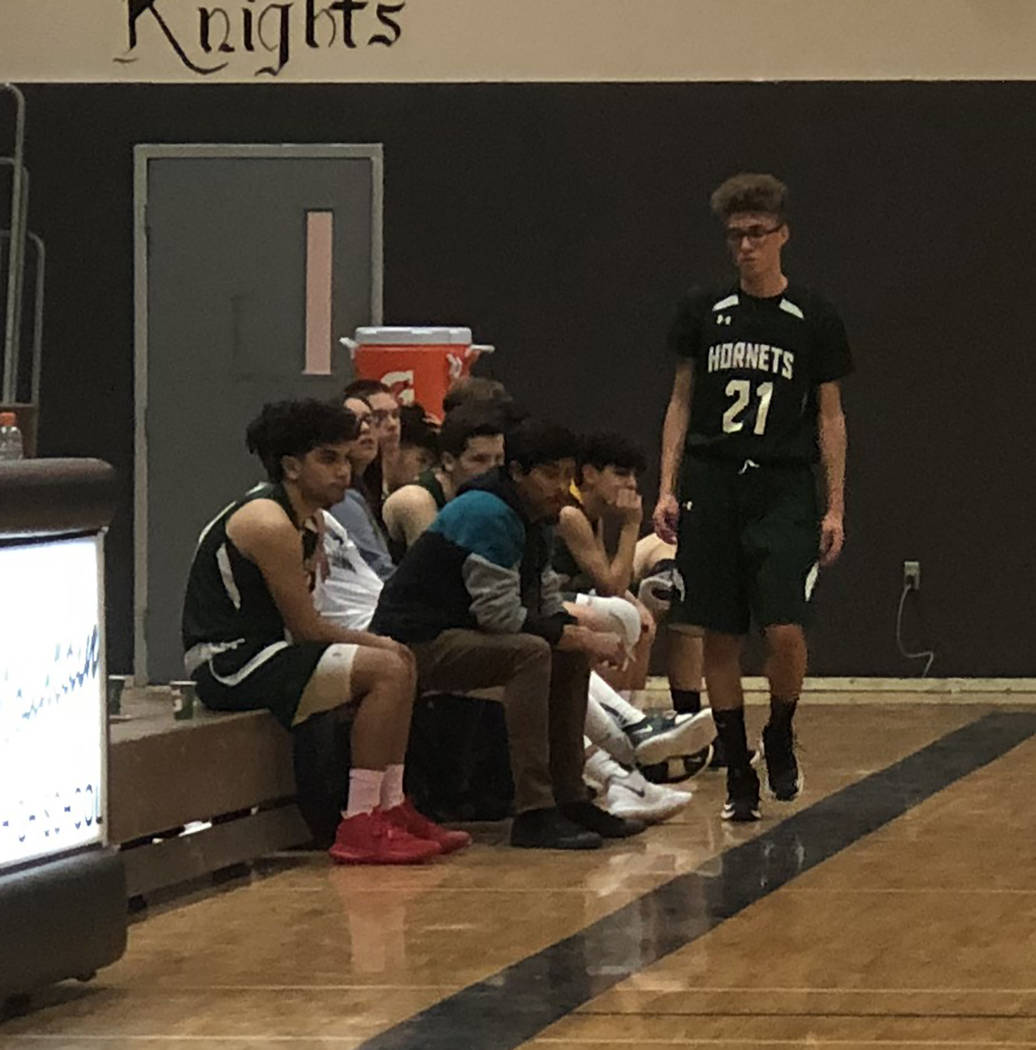 Tom Rysinski/Pahrump Valley Times Beatty's Jorge Leon heads toward the scorer's table to check in during the Hornets' game against Round Mountain on Saturday. Leon reached double figures in both games Saturday, scoring 11 points in a win over Tonopah and netting 12 in the loss to the Knights. 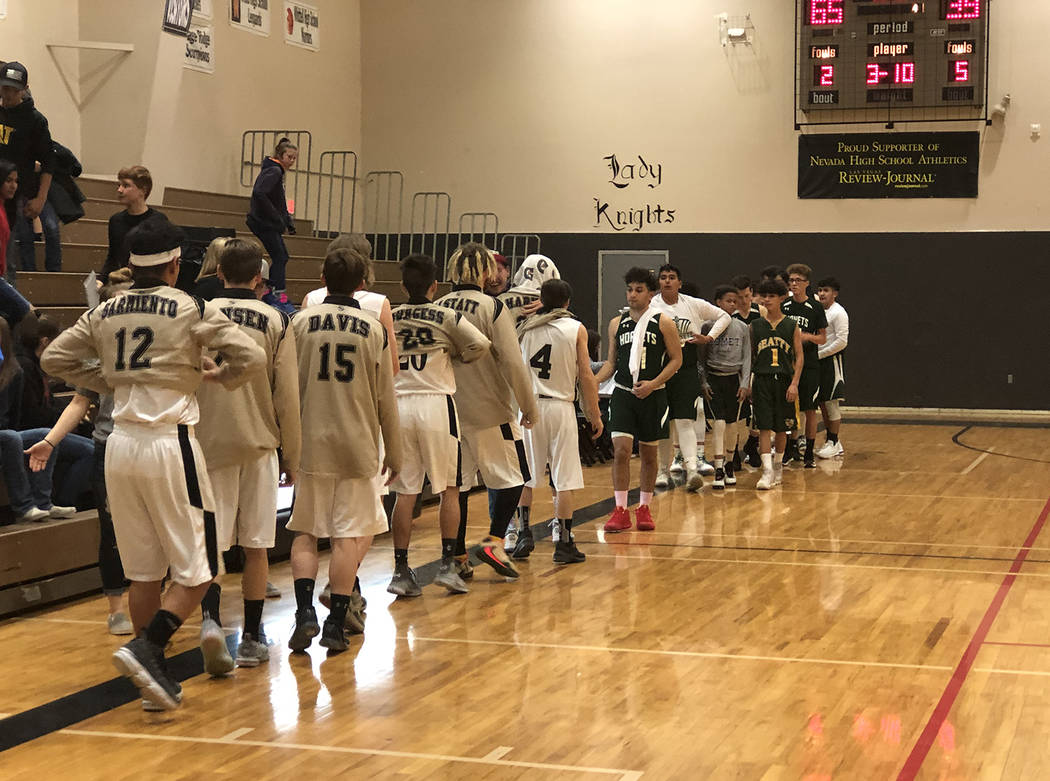 Tom Rysinski/Pahrump Valley Times Round Mountain players, left, shake hands with Beatty players after the Knights' victory over the Hornets on Saturday in Round Mountain. 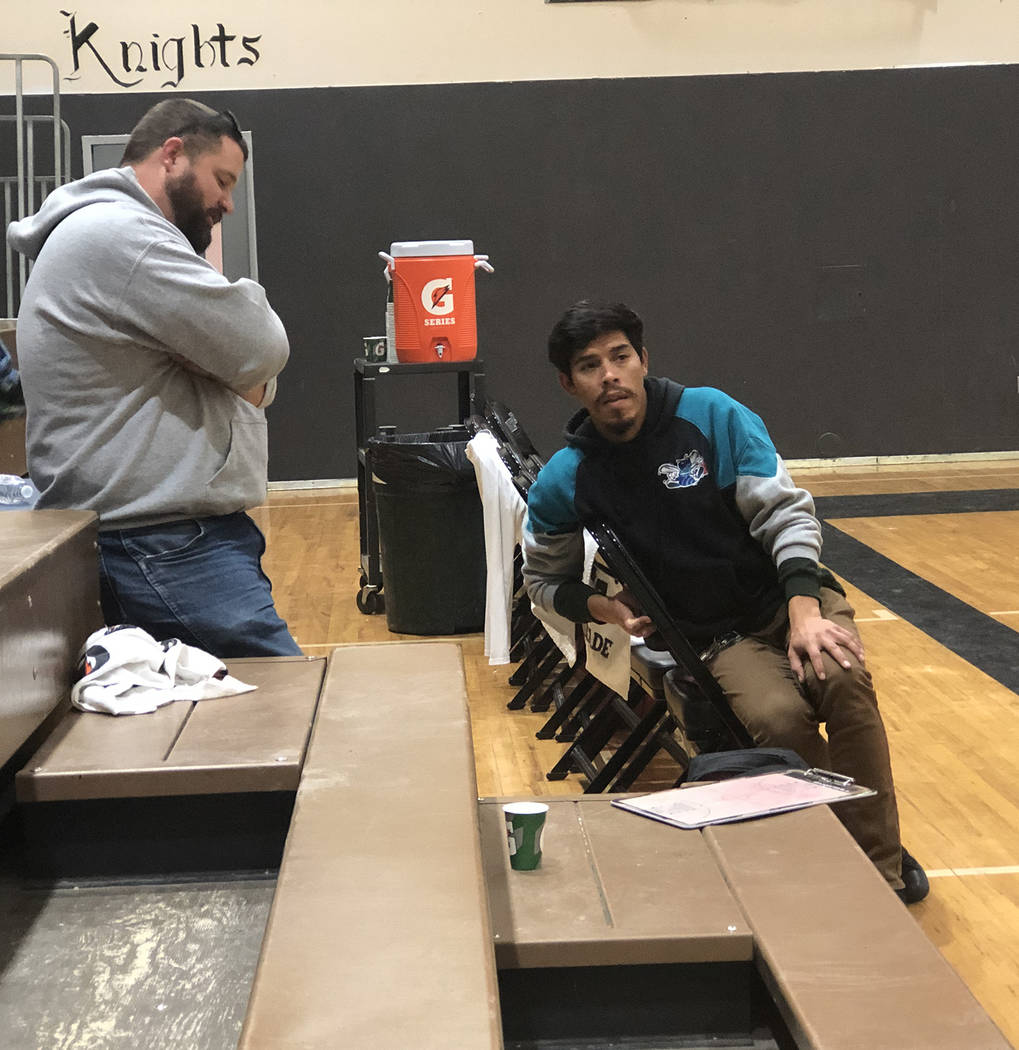 It was a mixed bag for the Beatty High School boys basketball team last weekend at Round Mountain High School.

The Hornets started out by crushing Carlin 78-34 on Friday, had a less-overwhelming but very solid effort in a 51-34 win over Tonopah, then ran into a very hot Round Mountain team which buried them early and coasted to a 65-39 win.

“The last game was just energy,” Beatty coach Miguel Mendoza said. “We didn’t come out with the same energy they did.”

Perhaps that was understandable in that Knights played twice Friday and had only one game to play Saturday, while the Hornets had the opposite and had to face the best — and most rested — team in the field on about 90 minutes of rest.

“We played Carlin and Tonopah, and those were two good games,” Mendoza said. “Then in this game we just didn’t match the same energy.”

And a low-energy Beatty is not going to work, as Mendoza is running a high-octane offense that requires the team to be firing on all cylinders.

“That’s where we have all of our success, and that’s what I’ve been pushing all this year, but we’re not completely there yet,” Mendoza said.

Against Tonopah, it was Jorge Leon and Ivan Ayala leading the way with 11 points apiece. The Hornets jumped out to an 11-4 lead, then outscored the Muckers 13-5 during the second quarter. But the offense really caught fire after halftime, as six players found the scoring column in a 20-point outburst.

“The kids do like playing this way, they just haven’t played that way in the past,” said Mendoza, a 2010 Beatty graduate who coached the middle school team for several seasons. “I’d say half the bench has played this system, and my seniors have to transition into it.”

The Hornets showed they can win with that bench, as starters Fabian Perez and Juan Lopez each were plagued by foul trouble. Lopez, a force down low for Beatty, picked up his third foul on an offensive foul away from the ball before halftime. Perez had even less luck with the officials, getting hit with his third foul barely 2 minutes into the second quarter and getting a fourth midway through the third.

But the inexperienced Muckers could not take advantage of the Hornets’ foul woes, and as Beatty continued to press the issue the lead grew to 20 by the end of the third. The fourth was basically garbage time.

Although the matchups were set up in advance, the result meant that the final game of the weekend would pit teams that each won their first two games.

But the Knights were just too good, scoring the first 13 points of the game, and leading by 14 after one quarter. Again, the Hornets came out strong in the second half, putting up 17 points in the third quarter as five players hit field goals, but the Knights almost matched them with 16 points in the third and had far more in the tank in the fourth, clearing the bench with 4:03 left in the game.

“When we don’t fill in our lanes, you can just see that our offense just isn’t there,” Mendoza said. “Our whole game plan is just running them out of the building.”

Leon finished with 12 points, but 10 players contributed points for Beatty.

Overall, Mendoza was pleased with the Hornets’ weekend.

“Jorge played really well, Fabian and Ivan played well,” he said. “Our posts are getting a lot better in rotations, and that made the difference keeping the other team’s score down.”

But right now the Hornets will turn their attention toward putting their new system into practice against league foes. Beatty opens Class 1A Southern League play Jan. 7 against Word of Life, and Mendoza expects the Hornets to be ready.

“We do a lot of sprints, we do a lot of conditioning,” he said. “It’s just a matter of time, and time is not in my favor right now. But it will be.”