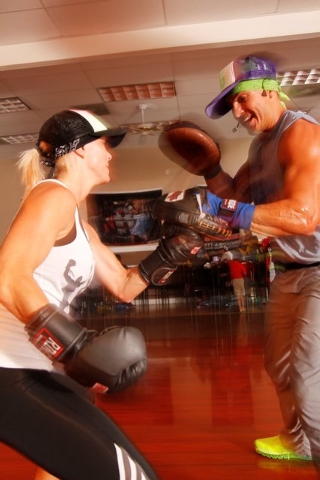 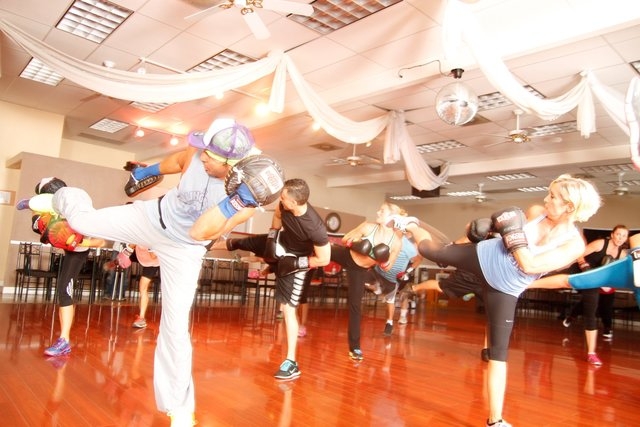 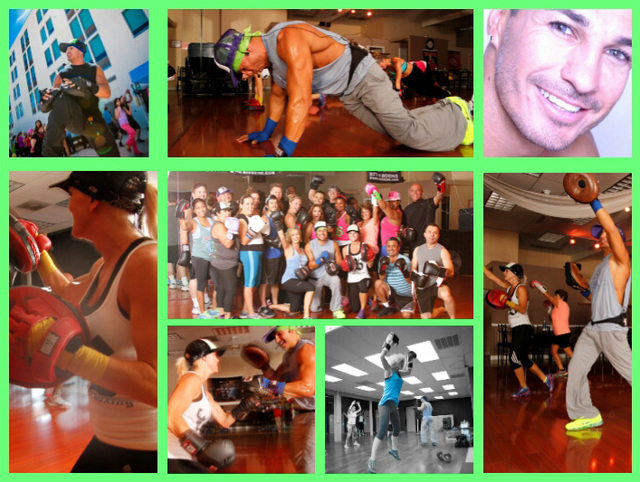 It’s that time of year again when the pounds just magically appear around the middriff section of the body because of all the good things around the kitchen to pop into your mouth. At this time of year people are madly looking for a stop-gap measure to keep the pounds from accumulating.

If you are looking for some exercise with a little zip to it, X-treme Boxing might be for you. X-treme Boxing creator and founder Romeo Romero says he has created a workout that keeps you fit and it is a lot of fun at the same time. By taking the class students burn 1,200 calories per hour. In contrast, running gives a person 400-600 calories.

According to Romero, the average person puts on eight pounds during the holiday season.

Romero comes from a Muay Tai, kickboxing background. After that he went to boxing.

“I trained with the boxer that beat Lennox Lewis for two years. I then opened my own boxing gym and fitness center called the Rome Dome,” he said.

At the dome, he taught the basics of boxing and keeping in shape. Romero was a professional boxer and learned to box at 16 and is now 38 years old.

He created the X-treme program in 1999 and started certifying instructors in 2006. His program combines an intense cardio workout with boxing, kickboxing, stylish choreography and music. He said it originated in Las Vegas to help the casino and entertainment industry stay in top shape.

Now there are 20 instructors teaching Xtreme Boxing around the country.

The program was designed to keep people in shape, lose weight and tone up, but at the same time you are wearing gloves and learning to punch.

“During the class I am swinging back and I am holding the focus mitts. So at the same time I don’t think people would want to mess with people who come to X-treme Boxing, just for the fact that they actually do punch and hit,” Romero said.

“People will encounter a mixture of both, boxing and Muay Thai from the class,” he said. “All the leg movement comes from Muay Thai, the round houses, the push kicks, the knees. The punching is basic and that is derived from boxing.”

In addition to the two disciplines, Romero also introduced plyometrics and body sculpting to round out the workout and of course, some abs.

“There are lots of combinations we use, not only punching but punching and kicking,” Romero said. “The first time you are off in timing but after a couple of times you catch on.”

People who start off out of shape start off slow. Romero says anybody can start this program.

It takes about 2-3 times to actually learn the choreography and the boxing combinations.

“Everything that can be done at high intensity, can also be done at low intensity,” Romero said. “So if you are a beginner you don’t have to do the moves at high intensity. I have a senior at 65 and another person who just are doing modified moves. Instead of the jumping moves they are doing steps. Every move has a modification. On top of that, we are doing a little bit of body sculpting. At the end we do a group exercise and abdominal exercises which benefits the whole body and slows us down.”

He emphasizes a lot of people finish because they modify it and bring it down to their level and people keep coming back because they love the music.

Romero says he gets all ages and all kinds of people. The youngest was 6 years old and the oldest in her 60s.

“Most of the people that do come are in their 20s to 30s and we have a few senior citizens that take the class,” he said. “I had one lady who was 260 pounds in Las Vegas and is now 230 pounds after a month. We have a lot of people that just want to feel better and get stronger. The class is also a big stress reliever as well. In the class, we actually wear gloves. Now it isn’t required but you do burn 200-300 calories more when you do have gloves because with the gloves you get to punch.”

Romero currently teaches the class in Pahrump with Crystal Avena, a sixth grade teacher at Rosemary Clarke Middle school, who loves teaching X-treme Boxing in her off time.

“She is probably the best instructor I have. She learned from me 3-4 years ago and I just certified her recently as an instructor,” Romero said.

Avena loves to work out but she said this was the first class she ever took that challenged her.

“I got word about it and tried it out three years ago and I fell in love with it,” Avena said. “I never missed a class. Last year Romero mentioned certification and I did it. Afterwards, I went to Anytime Fitness, and got hired over there and I have been teaching X-treme Boxing there ever since.”

Avena said she was in good shape when she started.

“I always worked out, but even though I thought I was in great shape, when I took this class it was the most sore that I have ever been,” she said.

She says it’s challenging for her because of the intensity and she always pushes herself.

“An hour of non-stop cardio was a lot for me,” Avena said. “The music is great and is great energy that makes you want to give it your all. That is the best thing about this class, I think, the music.”

Avena said her weight had plateaued when she began the class, so right away in the first month she lost nine pounds.

“It definitely leaned me out and it was the best shape I had ever been in,” the instructor said.

The two instructors teach Thursdays at Anytime Fitness at 7 p.m. and on Mondays at Donna’s Studio of Dance at 7 p.m.

A certified instructor, Brenda Villgas teaches at Custom Health and Fitness on Tuesday at 6:30 p.m., Classes are $7 per class. 775-513-1652 or look up the site, X-tremeboxing.com. The first class is free.