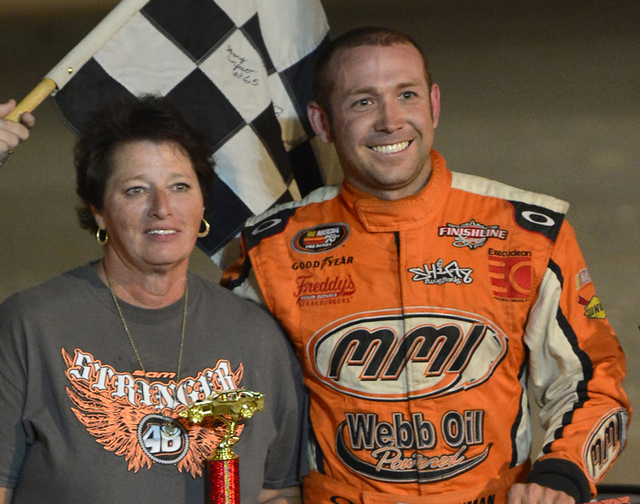 The Sam Stringer Memorial was a huge success over the weekend with 56 cars turning out for the race. The $1,500 purse was given out in the IMCA Modified class, with 18 cars showing up. The winner was Kyle Heckman, a young racer from California. Randy Thornell took second, Jon Jensen was third, Jason Pike fourth and Tony Kinkade was fifth.

The other large purse of $500 went to the WCSS Super Stocks with 13 cars. Steve Nash was the winner, Jason Pike took second, Dale Daffern was third, Keith Gott was fourth and Ron Moffit was fifth.

Chad Broadhead, owner of the Pahrump Valley Speedway, said things went smoothly. “We were out of the race just 9 minutes after 11 p.m. We had no problems. The weather was great and the track fantastic. It was just an all-around good night and that’s the way this racetrack should be run every race. It was a perfect night,” he said.

Sheree Stringer, the Sam Stringer Memorial race organizer, agreed that the race went well. The amount of money that the race made for the scholarship fund is still being tabulated. “I have a couple of vendors that are still outstanding before I get a total on the money raised, but I think we made a $1,000 to $1,500 extra this year. It was a great race and the young man Kyle Heckman was very nice and very appreciative. He couldn’t believe the size of the trophy,” she said. She said she was very thankful to all the fans and racers for coming out to support this event. All proceeds raised by this event go to the Sam Stringer Memorial Scholarship fund.

Steve said he will keep racing in Tonopah, and hopes one day to see his name on the trophy.