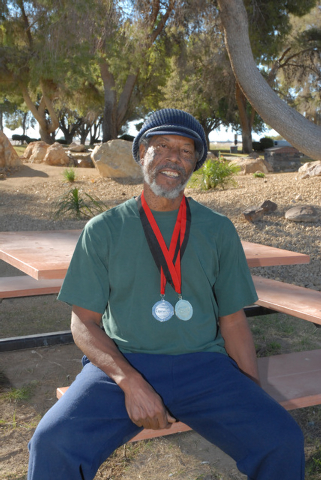 Pahrump resident Marvin Caperton made the trip to the Huntsman Senior Games in St. George, Utah last week and brought home two medals, gold in the 50-meter dash and silver in the 100-meter dash.

The senior games ran from Oct. 7 through Oct. 19. These games began in 1987 and were founded by Daisy and John H. Morgan Jr. At the time, the vision was an international sporting competition for men and women over 55. The games are headquartered each year in St. George and attract over 10,000 athletes annually. The age has since been lowered to 50 to accommodate more people.

In 1989 Jon M. Huntsman, Chairman of the Huntsman Corporation, became the principal sponsor.

The senior athlete is a former University of California at Los Angeles football wide receiver and track star who played football under Dick Vermiel.

During the summer, he had also competed in the National Senior Games Association event in Cleveland, which was in late July. He came away with a fourth place in the 50-meter dash and a 10th place in the 100-meter dash.

For his events in the world games, he trained three days a week for 1.5 hours per day.

“The guys were not as fast (at World’s). There was not as much participation in track and field. They had the same events as the nationals. The nationals had 50 people in the 100 and the World’s only had 15. I saw a few people in the younger divisions that I saw at the nationals,” he said.

Caperton had done his research before he went to the world games and knew he would finish around the top.

“There were no qualifications and I could have competed in any event I wanted to. The reason for this is I think they are dedicated to bringing more international countries into their games and the Huntsman’s are pushing more senior health issues,” he said.

Caperton is a 58-year old athlete who trains for senior events all year long.

“If we started games here, and they have had games here, I think there is enough interest, but it is a lot of work, but I am willing to help out,” he said.

The national senior games brought around forty million in revenue to the city of Cleveland. Senior games bring senior dollars to a town. People interested in starting the senior games back up in Pahrump contact vhee@pvtimes.com.