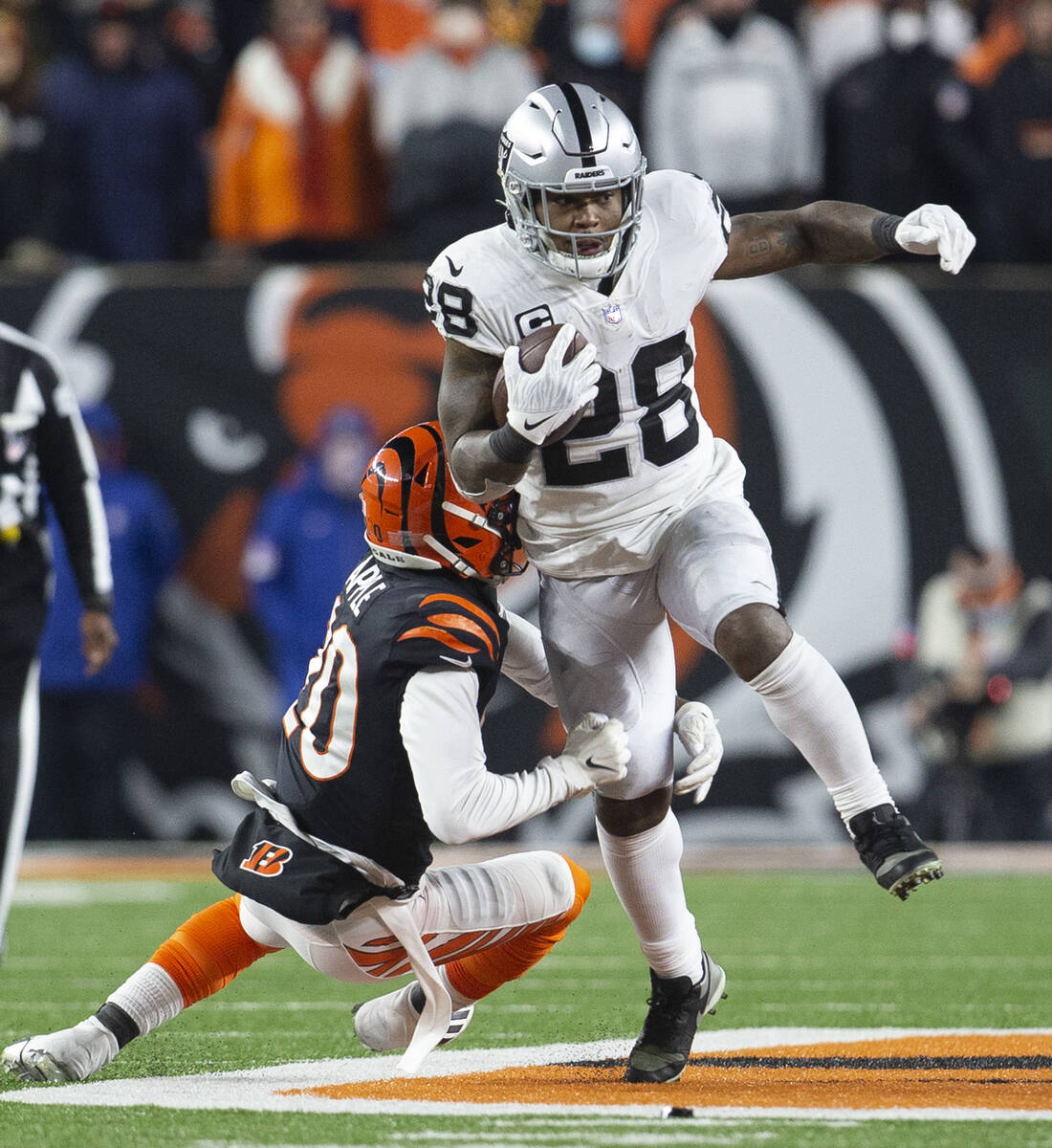 Raiders running back Josh Jacobs (28) runs as Cincinnati Bengals cornerback Eli Apple (20) looks for the tackle during the second half of an NFL playoff game at Paul Brown Stadium on Saturday, Jan. 15, 2022, in Cincinnati. (Heidi Fang/Las Vegas Review-Journal) @HeidiFang

The Las Vegas Raiders played their first playoff game in five years when they traveled to Cincinnati over the weekend to take on AFC North champion Cincinnati and dropped it to the Bengals 26-19.

The Raiders came into the playoffs tied for the longest active winning streak of four games with the Buffalo Bills. A win streak that nobody thought this team had what it took to make dreams a reality.

The 2021 Las Vegas Raiders had dealt with so many things that had gone against them throughout the season from their head coach Jon Gruden resigning, to one of their top wide receivers getting in a drunk driving accident that left the driver of another vehicle and her dog dead at the scene of the crash.

After all of that, they also lost their second-year safety due to an inappropriate video he posted on social media threatening the lives of other people while waving guns around in the video.

Even with all of these events happening to the team, they were still able to defeat the odds and put together a 4-game winning streak when every game was a must-win game in order to make the playoffs.

When the Raiders made the playoffs in 2016, Carr broke his leg in week 16 of the regular season and wasn’t able to play in the playoffs.

Las Vegas got off to a slow start against the Bengals, something they hadn’t done since their week 16 game against the Broncos.

Despite taking a 3-0 lead on their first drive, the Raiders quickly found themselves down 10-3 after the Bengals scored a touchdown on their opening drive and forced a fumble by Carr on the Raiders’ second drive, leading to a Cincinnati field goal.

Overall, Carr played well, he just had two costly turnovers. Carr finished his first career playoff game completing 29 of his 54 pass attempts for 310 yards with one touchdown and one interception.

The interception he threw was the most costly of any turnover this season. It happened on the Bengals 2-yard line with just 17 seconds left in the game. The Raiders were trailing 26-19 at this point and Carr had led the team down the field for a potential game-tying touchdown drive before the defense came away with the game-sealing interception.

Carr had his top two receiving options back on the field and healthy for the first time in seven weeks. Tight end Darren Waller had a team-high 76 yards on seven catches and Carr’s new favorite target Hunter Renfrow caught eight passes for 58 yards.

With the Raiders’ loss, they now begin their offseason and start on their quest to fill gaps and add pieces to come back better next season.

There are many rumors circling around the franchise as to what direction they’ll go in for their next head coach. Will they stay with interim head coach Rich Bisaccia? Will they go out and find someone outside of the program? Current Michigan Wolverine and former San Francisco 49ers head coach Jim Harbaugh has been linked to be a possible replacement.

Only time will tell what Mark Davis decides to do next with the franchise.