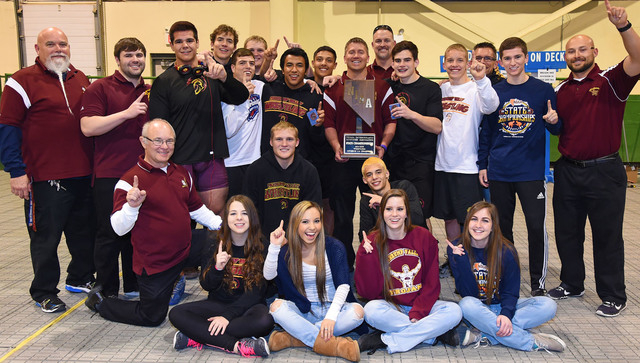 Jax and Jace Clayton are identical twins who made history over the weekend by both winning individual state wrestling titles in Winnemucca over the weekend at the Nevada Division I-A Wrestling Championships.

According to Donnie Nelson, assistant director of the Nevada Interscholastic Activities Association, this could be the first time in recent history that twins had won at the Division I or I-A.

The two have made a big impact in football and wrestling teams over the last four years at Pahrump Valley High School.

Jax took the 195 pound title and Jace took the 285 pound title. They talked about winning the title with the PVT.

On the first day of the tournament, Jax was all nerves and really wasn’t sure how things were going to turn out.

“It was a lot of anticipation building up to it but I got a pin in the first period against my South Tahoe opponent,” he said.

This put Jax in the semifinals. He said the first day he enjoyed the fact that he was the number one seed.

“The higher your seed means the worse your opponent is at the beginning of the tournament,” Jax said.

This made the first day a little easier, but once in the semifinals he knew he had to get mentally prepared. The semifinals were different and the second day he knew was going to be tougher. He was going up against the best and he had to prepare for it.

He said tournaments were all about the mental preparation going into each match and every time he wrestled that aspect was always the same.

“I think about what is going to happen during my match,” Jax said. “I focus on that. I focus on what I am going to do. I think about who my opponent is and if I wrestled him before. I also think how I am going to wrestle him. In this case I had wrestled him before. I knew this guy from Mojave (DaiJon Payno) threw a lot. My game plan was to keep my weight balanced and not push on him. I was making it not easy for him to throw me.”

Once Jax beat Payno the focus turned to Abraham Preciado. A Trojans extra, also at 195 pounds, he had won his semifinal match. He took out a Lowry guy. This meant he had to face Jax in the finals. It was a repeat of the regional finals where Jax met Preciado. Preciado made a decision at that point as Jax explains.

He said he had wrestled Preciado all year long in practice and had beaten him as recently in the finals at the regional tournament.

“As a team we knew what had to be done going into the finals,” he said. “Abe knew I had to win to get the points for the team for he couldn’t win points. Abe forfeited due to injury default which allowed us to get the points. Abe did his job and he took out a Lowry contender that went into sudden-death overtime. Abe wanted his last match to be a win and he wanted to go out a winner and as a team it made sense.”

The team was still not out of the woods points-wise. Jax wanted the team individual championship. He said his team was paying attention to every match during the semifinals. They breathed a bit easier though once the finals started. Five out of seven Trojans won their semifinal match, scoring 50 points for the team.

Even at that point the team really didn’t know they had won the state title.

“We really didn’t know where we stood at that point,” Jax said. “We did have one wrestler who did take the time to figure out that if we lose all our matches and they won all theirs, then we would win by one point. That was our motivation to win at finals.”

Jax said the whole team had gathered around the first Lowry match of the finals, which was the 126-pound match.

All of our fans were watching the Lowry match too and when the Lowry kid lost, we then knew it was a done deal and we had won the title.

Jace had a little tougher road to go down than his brother for he had to fight through the semifinal and the final, but that road was made a little easier when Luis Cardenas lost to Mervyn Penniston in the semifinal round. Cardenas had beaten Jax twice before and was last year’s state champion.

“I was disappointed that I didn’t get to wrestle Cardenas in my last match,” Jace said. “If I had faced him, my game plan was to come at him pretty hard during the first period. I was planning on working him down and beating him up and just wearing him down.”

Jace alluded to the fact that the Clark wrestler did him a favor by taking out his old rival from Lowry.

“He did our team a big favor by taking him out because they took 10 points away from Lowry,” Jace said. “I watched that match. Our entire team watched that match and we were cheering for the Clark kid. Penniston was able to throw his weight around. I think Penniston wrestled a great match and it could have been because Cardenas didn’t know what to expect.”

When it came down to his final, Jace knew his opponent. It didn’t matter that the Clark kid had beaten his rival. Jace knew Penniston like a glove.

“I had faced this Penniston three times in the last three weeks and I had beaten him by fall all three times,” he said. “I pinned him in the beginning of the second period.”

If you would have asked Joe Clayton, the father and coach of the twins, if both his kids would have won the state title prior to the finals, he would have replied, “I knew they would both have a shot at state champion, but the odds of having twins win as state champions was pretty slim. I would have never guessed it. I knew based on the training and the sweat that they had it in them but if you told me that I was going to have twin state champions I wouldn’t have believed you.”

For the twins, their next challenge will be finding a college to attend next year.

At this point, it’s not clear what sport, if any, they will be playing in college.