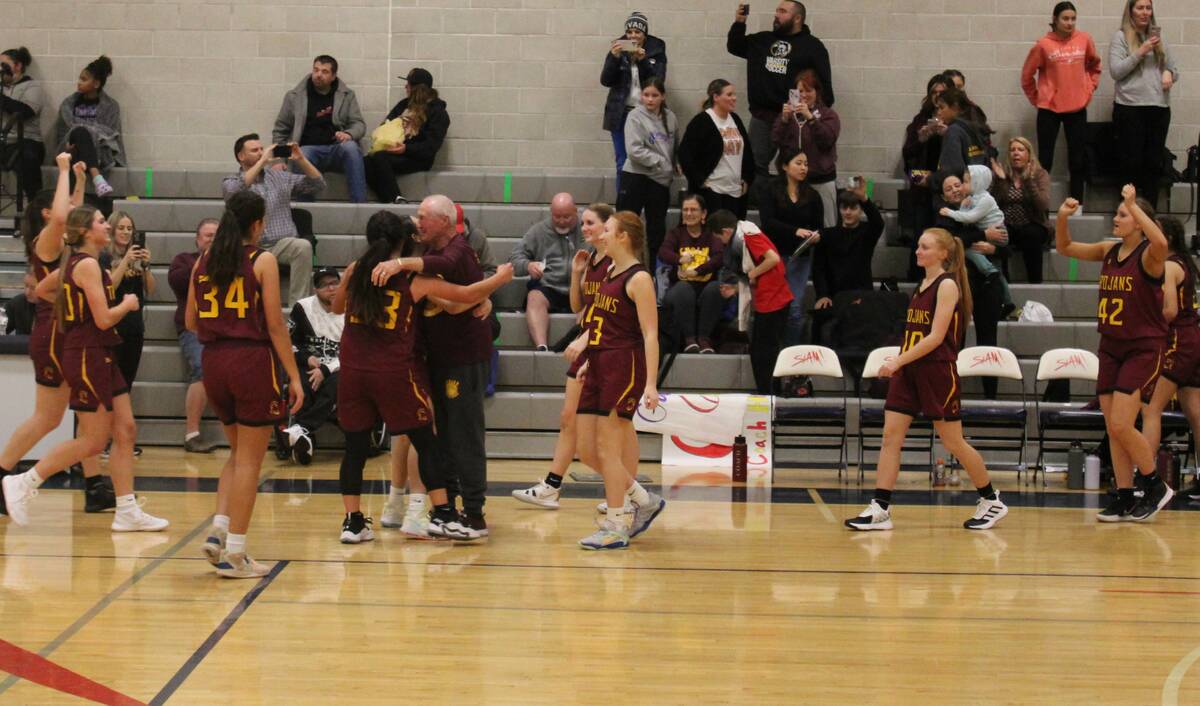 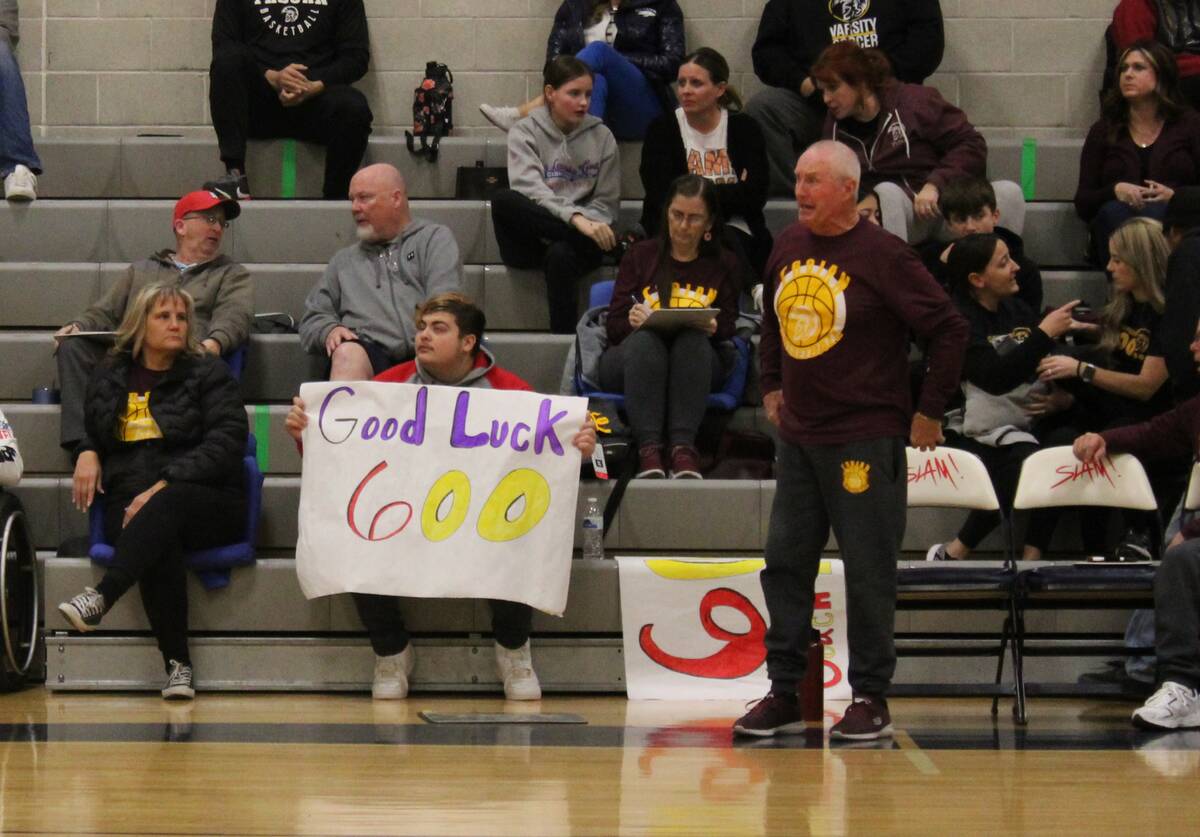 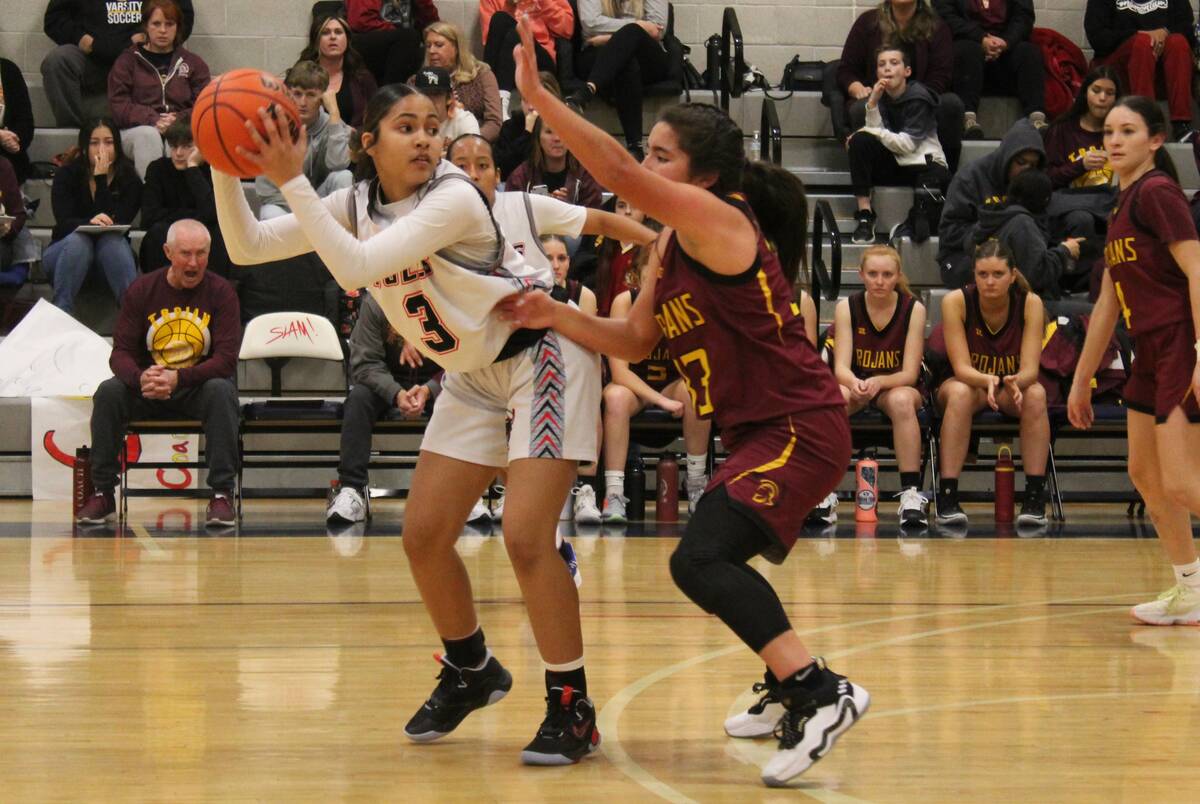 Danny Smyth/Pahrump Valley Times Junior guard Paris Coleman (33) helped guide the Lady Trojans to a 40-27 victory over the SLAM Nevada Bulls. Coleman made 8 of her 14 free throw attempts and finished with 10 points. 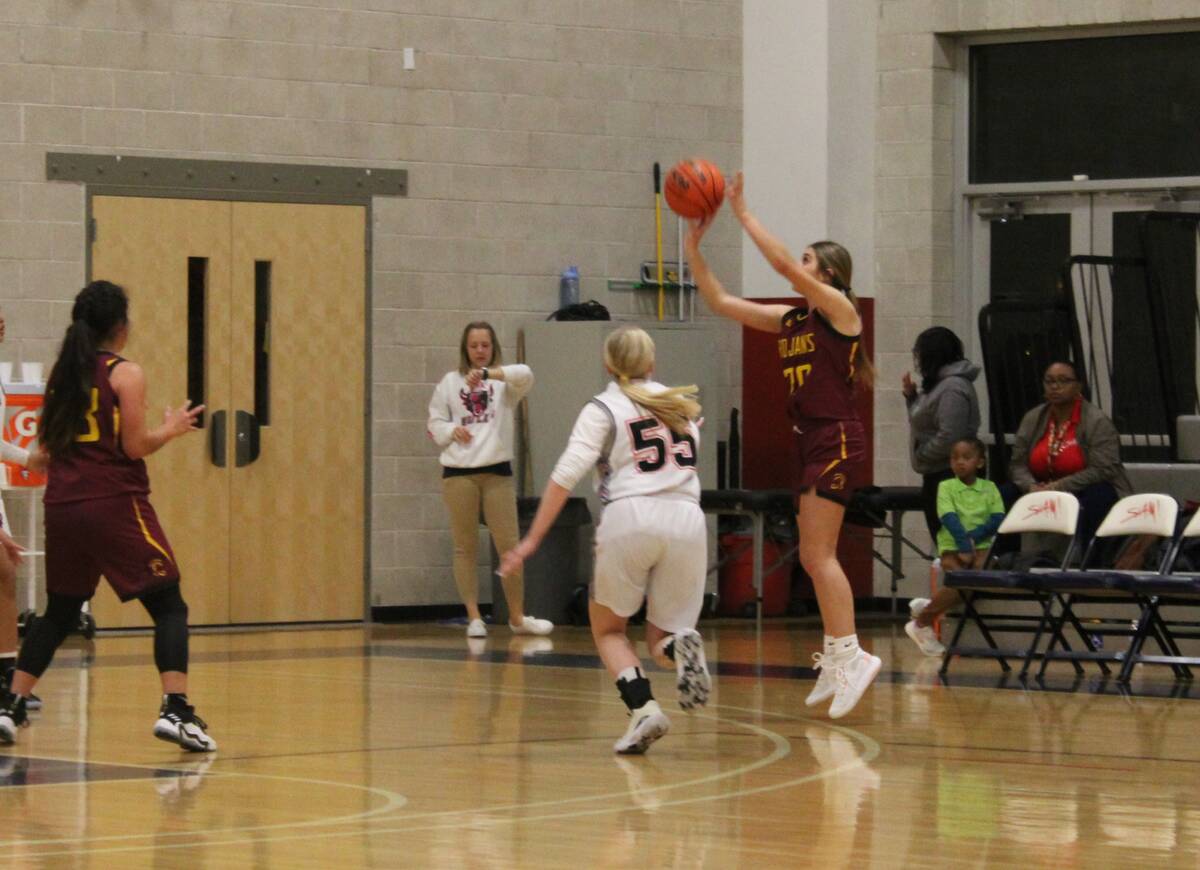 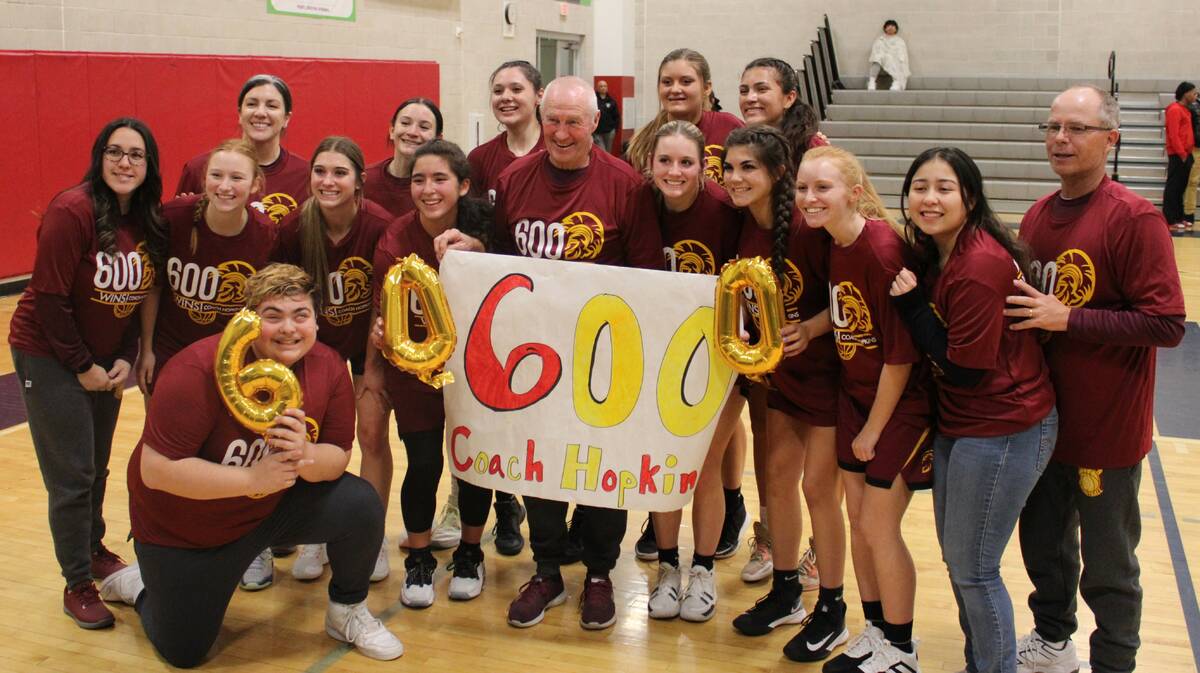 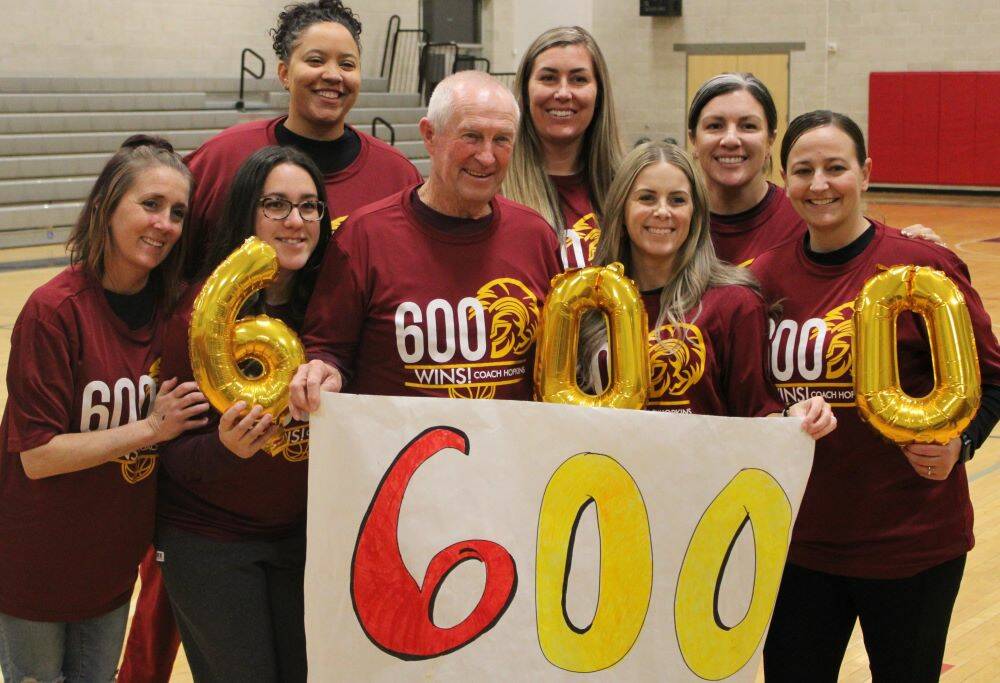 Danny Smyth/Pahrump Valley Times Past players who were on the team when Bob Hopkins got his 500th career win showed up to support the Lady Trojans in their win over the SLAM Nevada Bulls.

Hopkins and the Trojans were supported by family, friends and past Pahrump Valley players during their game.

“It was a milestone that when I started coaching I never dreamed of,” Hopkins said about getting his 600th win. “This is my 31st year coaching girls basketball. It’s been a great run.”

Neither team got off to a good start as they both struggled to hit shots at the beginning of the first quarter.

However, the Lady Trojans were able to break through near the end of the quarter to go on a little run to end the quarter with a 13-5 lead.

Junior guard Avery Moore had a team-high 11 points for Pahrump. This was her first game of the season scoring in double figures.

Moore had three rebounds, one assist and one steal to go along with her points.

Both teams again had a hard time scoring in the second and third quarters. They combined for just 17 total points.

The Lady Trojans took a 15-8 lead into halftime against the Bulls.

“We finally made free throws,” Hopkins said with a smile about overcoming the low-scoring quarters. “When we won 500, the 500th win, we had two quarters we didn’t score in that game. So, I guess defense prevails.”

The offenses really began to click in the fourth quarter. The teams combined for 32 points in the final eight minutes of the game.

Pahrump Valley was able to extend their lead and hold on for the win, outscoring the Bulls 19-13 in the final frame.

She got to the free throw line almost at-will due to the low-high ball movement of the Trojans. This style of play has helped them throughout the season.

They frequently find themselves either with close shots near the basket or they are able to get defenses into trouble by forcing fouls on their opponents – much like they did to the Bulls.

She would finish the game with 10 points and had seven rebounds for the Trojans.

As a team, the Trojans made 16 of their 24 free-throw attempts.

With their success in the fourth quarter, the Trojans would pull away to secure the win for their head coach.

As the final seconds ran off the clock, every Pahrump player swarmed Hopkins to give him a hug and congratulations on his great accomplishments.

On Monday night, the Trojans were back in action in another road game. This time, they traveled to Southeastern Career Tech in Las Vegas to take on the Roadrunners.

Pahrump went into halftime with just a 4-point lead, 24-20, but used a strong second half to pull away and take home the 51-35 victory.

The Lady Trojans will play their next game this Thursday, Jan. 26, when they travel to Boulder City to take on the Eagles.

Pahrump won both of their meetings between the two schools last season, winning both games by more than 20 points.

Tip-off is scheduled for 5 p.m. 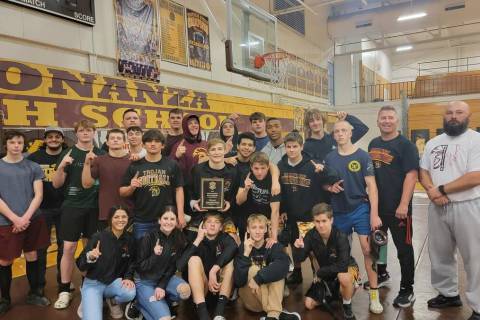