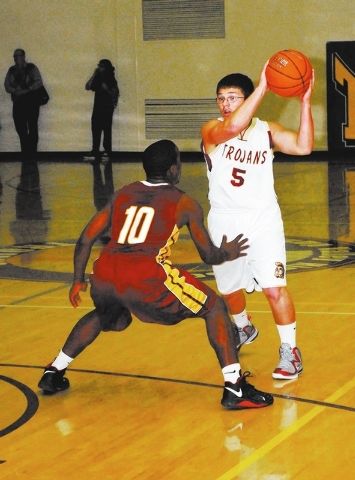 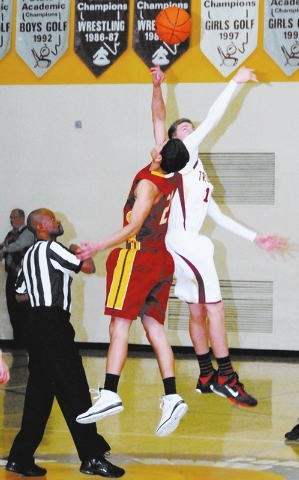 The Trojans men’s basketball team played with a lot of heart last Friday at Cheyenne in a loss that was more bearable than the Clark loss on Wednesday. The team scored 40 points to Cheyenne’s 77.

At halftime, the Desert Shields led 34-21, which is respectable. They pulled away in the second half by outscoring the Trojans 2-1 in both the third quarter and the fourth.

Cheyenne scored 43 points in the second half compared to the Trojans’ 19. Again, the Trojans have been faltering at the boards and not making shots.

Both Cheyenne and Clark now lead the League at 2-0 with Faith Lutheran in second tied with Mojave at 1-1. Western and Pahrump are both 0-2 at the bottom.

The Trojans lost to the Clark Chargers on Wednesday by the score of 77-21. The team is 0-2 in league play and 2-8 overall. Trojans Coach John Toomer knew his team would have trouble scoring going into Wednesday’s game, but was happier with the Friday results.

“On Friday night we played much better, the score didn’t show it, but we played better even with two guys down,” Toomer said. “We actually shot better and we played better defensively. On Friday night our defense was just much better. The team just played better and it was just a whole different outlook than what happened on Wednesday. I think they were kind of shell-shocked with Clark. Just watching the team warm up they were shell shocked a little bit. Against Cheyenne I did not see that and they came out and they played much harder than they had probably the last three games. We shot a lot more shots against Cheyenne and against Clark we did not shoot that much because we didn’t have the ball long enough to shoot.”

Toomer said he really has not toyed with different defenses. He has stayed with a man defense up to now. Some coaches would be changing to a zone going up against taller teams or just switching in and out of various zone defenses.

Toomer said Brandon Hastings had his best game of the year last Friday.

“He came out and played harder than he has in a long while. He got more rebounds and worked harder on the offensive side and when he got the ball inside he worked hard to go up with it, which he hasn’t been doing. I would say Brandon Hastings stepped it up. The whole team really played way better than they played earlier in the week.”

Another player that also had a good game was Uriel Ramberg-Wiley, a junior transfer student.

“He had some nice three-point shots last week and this really fired up the team,” said the coach.

The Trojans will be in action against Valley High School this Friday. The men’s game will start at 6:30 p.m.