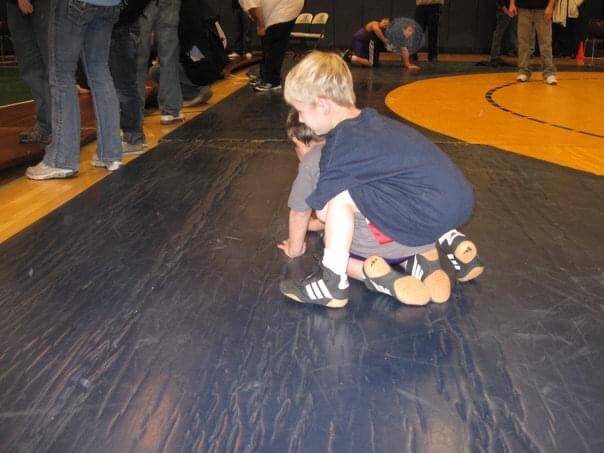 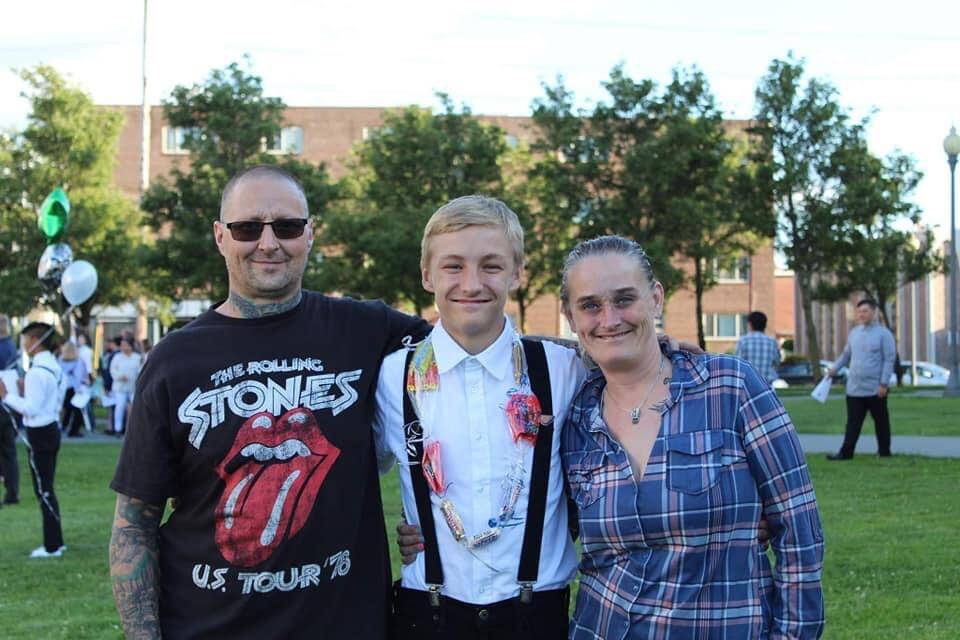 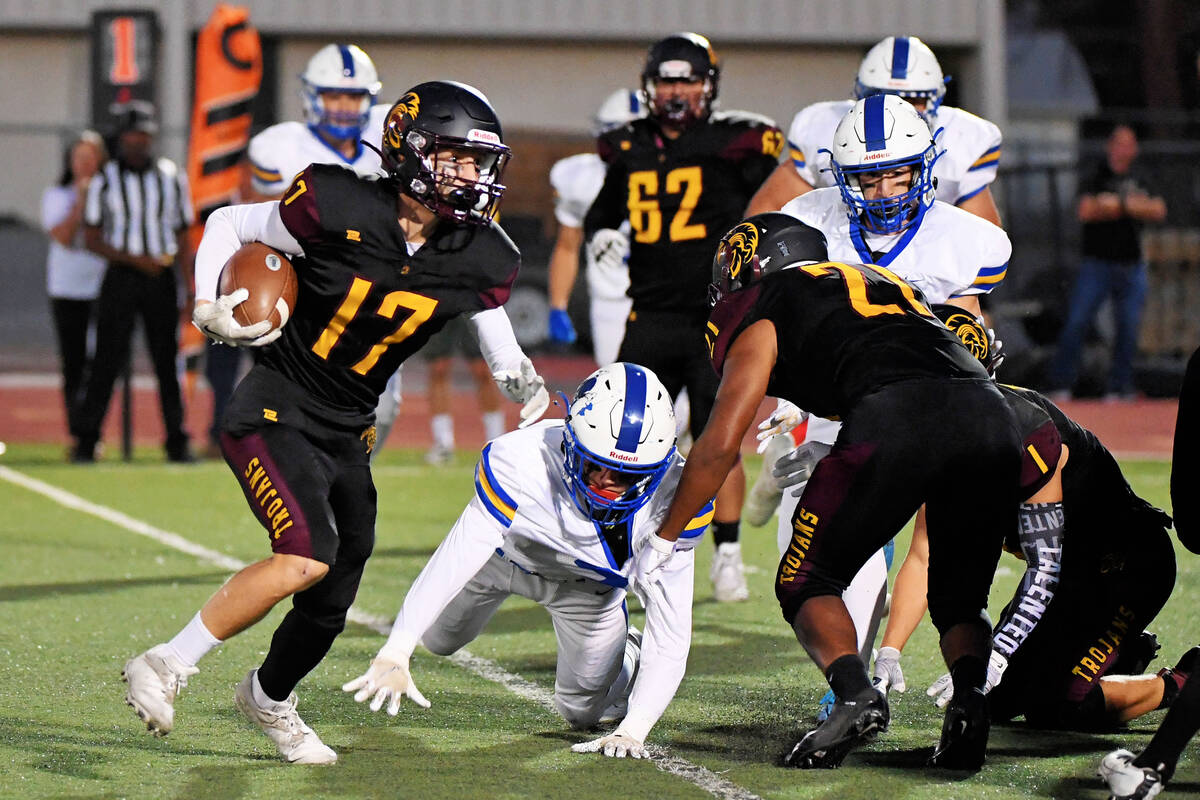 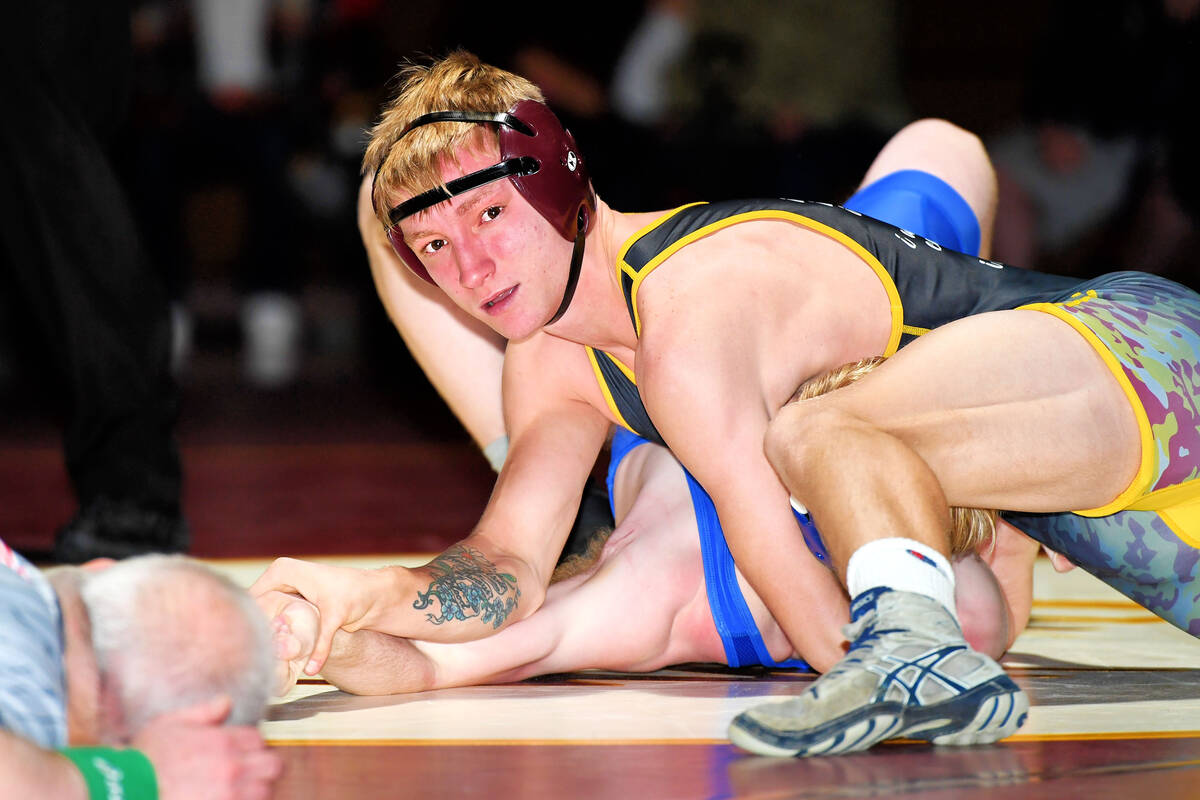 Peter Davis/Pahrump Valley Times Cole Venturo (top) trying to get a pinfall against his opponent in the Trojans' wrestling match against Moapa Valley on Tuesday, Jan 10, 2023

He has gone through more than most people do in a lifetime, but one thing is for certain: Cole Venturo can overcome some of life’s biggest obstacles.

Venturo was born in Brawley, California, where he lived for the first year of his life before he and his family moved up to Washington.

While in Washington, he had a bit of a tough childhood growing up.

Both of Venturo’s biological parents were drug addicts when he was a child. Because of this, Venturo didn’t get the parenting that a young boy needs. He was involved in sports from a young age, but as he got older he began missing school often.

However all of this changed with a simple phone call.

When Venturo was 9, his mother was arrested. While being taken away, she handed him a phone number. Stacey Howard was on the other end of that call.

Howard, along with her husband Tim, was a friend of Venturo’s mom.

The Howards decided to take in Venturo to live with them and their three kids – Lester, Steven and Kendall. During his time with their family, Venturo’s life improved in many ways.

The Howards said they were never able to legally adopt Venturo because it was too costly, but that didn’t stop them from giving him the best life they could.

Venturo remained an “accompanied minor” of the state until he turned 18.

After moving in with the Howards, Venturo grew up for most of his life in Everett, Washington.

“Honestly, I really enjoyed it there,” Venturo said of Washington. “I made a lot of great memories there.”

Venturo had been wrestling on and off since he was 5. It was actually Tim Howard who got him into wrestling. Venturo began playing football shortly after moving in with the Howards when he was nine.

He started playing them as just something to do, but he began taking both sports more seriously during his middle school years.

The coronavirus pandemic hit during the early years of Venturo’s high school career.

He had a tough time attending school and he began playing sports less and less. He was putting all of his focus into the job he picked up instead of into his studies.

With everything going on, the Howards were looking to move out of Washington. The move to Pahrump proved to be for the best for many reasons.

Venturo and his family could be closer to his brother, who had just had a child shortly before the move.

The move to Nevada gave Venturo a fresh start.

“Right now in life, I currently enjoy it. I’ve met a really good set of people,” Venturo said. “The coaches have been a great inspiration to help me continue to do my sports.”

He began attending Pahrump Valley High School in 2021 and has been part of multiple sports teams during his time there.

Venturo didn’t play any sports during his junior year, but he was a starter on the football team this past fall in his senior year, and he is a major contributor on the school’s varsity wrestling team.

Venturo didn’t care for football when he first started.

“I hated it because I was super fast,” Venturo said. “I thought that was it, that I could only run super fast.”

He was on the verge of quitting football, however a shirt was what made Cole want to keep playing.

He received a T-shirt from his football coaches with the name “Leroy” on it. That was his nickname on the football team. The shirt made such an impact on Cole that he still has the shirt hanging up in his room.

Sticking with football turned out to be a good decision for Venturo.

In his senior year this past fall, Cole helped guide the Trojans to a 4-5 overall record. He finished with team-highs in both rushing yards (531) and receiving yards (224) while scoring two touchdowns in seven games.

For his performances on the field, Venturo was named to the first team All-Mountain league team.

“Super thankful, super blessed,” Venturo said of his award. “I couldn’t have done it without my teammates. Literally none of my awards this year would’ve been without any of my lineman, without my quarterback, without my great blocking receivers. I would’ve never been able to do anything without my team. I really enjoyed my last year playing football with them.”

Venturo has become a star in the 144-pound weight class for the Trojans.

He has beaten nearly every opponent this season via pinfall in the first round, including a few matches that were won within the first 30 seconds of the match.

I remember when I was at the Spring Valley duals. I was attempting to get pictures of Venturo during his wrestling match, but he was so quick to pin his opponent that by the time I had turned on my camera and got into position, he had already gotten the win.

If he keeps this work up over the next month, Venturo could be one of the favorites to win the state championship in his weight class.

In addition to football and wrestling, Venturo is contemplating going out for the track &field team in the spring.

He has fallen in love with track more and more each year. It’s now his favorite sport, even over wrestling and football.

Venturo is hoping to turn this upcoming track season into a ticket to college through a scholarship.

He’s planning to participate in the 4×200 track event and is hoping to break a school record to “leave his mark”.

He picked up rollerblading when he was little. His family didn’t have a lot of money and it was something cheap they could do together for long periods of time.

“We would just go skating for hours,” Venturo said. “I always thought it was fun to dance to the music and do cool spins and jumps.”

Following high school, Venturo would like to go to school for business. He’d like to be an entrepreneur one day and own a business.

Everything that Venturo plans on doing in his life, he’s doing it for the Howards.