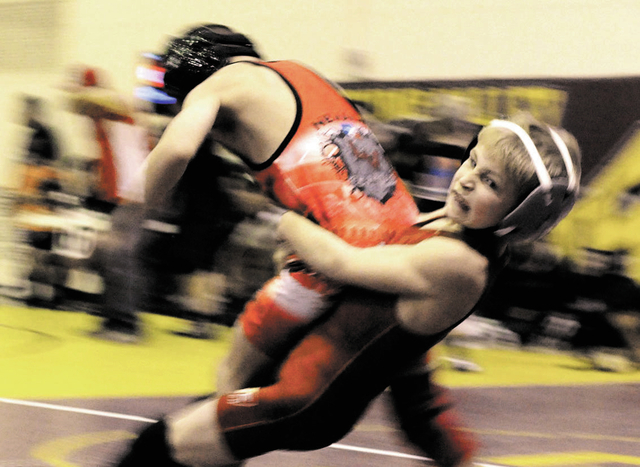 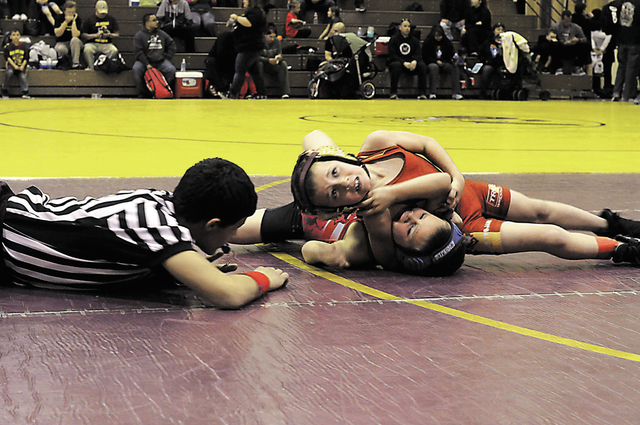 The tournament was a huge success in attendance and results. Head Coach Ray Cortez said about 221 wrestlers came from all over Southern Nevada to wrestle. He said there was also a pleasant surprise in the results.

It was the first time the junior Trojans had won their own tournament.

Cortez said the tournament couldn’t be done without the help of the Pahrump Valley High School wrestling team who provided help.

“The high school students were there from start to finish. They helped with the mats, helped set up and refereed. I want to extend a big thanks to Trojans Coach Craig Rieger for being the head referee. He handled all the disputes. He was a big help,” Cortez said.

Cortez said the key to the program and its success is the dedication from the parents and the kids.

“The kids are out here every day for practice. Our good wrestlers practice five days a week for two hours a day. They are working hard six days out of the week,” he said.

Coach Stephen Keefe, who has a son Michael in the program, said the program helps the kids develop good wrestling skills for the high school wrestling team.

He said at each tournament during the year you will regularly see the following excellent programs at the junior tournaments: Green Valley, Liberty, Boulder City, Monster Gym and Cimmaron.

“At practice we practice everyone together. For the smallest kids, occasionally we will take them aside, but that has not happened this year. They have just been wrestling with the other kids doing the same drills and moves,” he said.

Stephen said the kids this year have been excited about their successful year.

“I have noticed a lot of excitement by the boys and what helps us a lot is the coverage in the paper. Every Monday they come to practice with their medals and take a group picture. The guys that won over the weekend and the kids are excited about that and it has been building. At the beginning of the year it was just two or three kids, and now it is half the team,” he said.

Stephen’s son won a third place medal. His father said he really enjoyed watching his son progress during the day.

“This was only his second tournament this year,” he said. “In the first tourney he got beat by a kid that handled him pretty easily. He was wrestling for second or third yesterday and he was wrestling that same kid. He lost in the last 10 seconds of the match. He was in it right to the end and it was very competitive. I felt good about his progress. He lost to a kid in the first match and had to fight his way back in the loser bracket and he beat the first kid later on in the day.”

The fastest pin awards went to Donald Davis in bantam and Darin Legrand in novice.