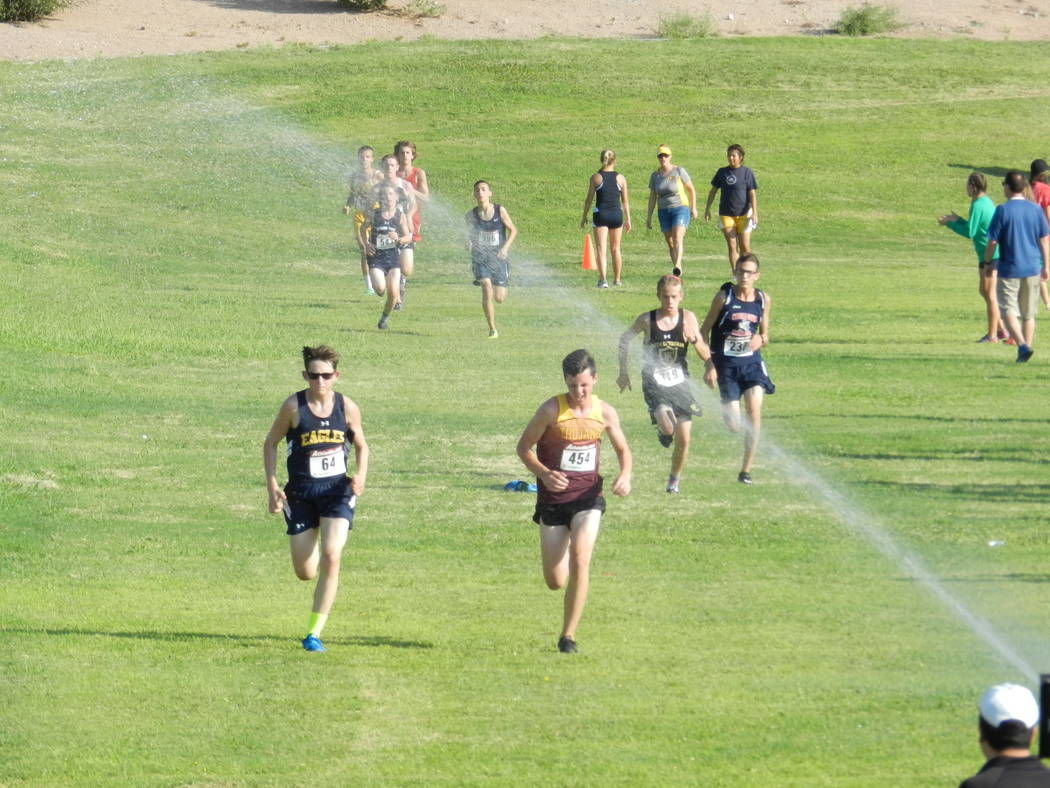 Special to the Pahrump Valley Times Sophomore Brandon Ruud for Pahrump Valley finished 50th (20:38) out of 155 freshmen and sophomore runners at the Labor Day Classic in Las Vegas. 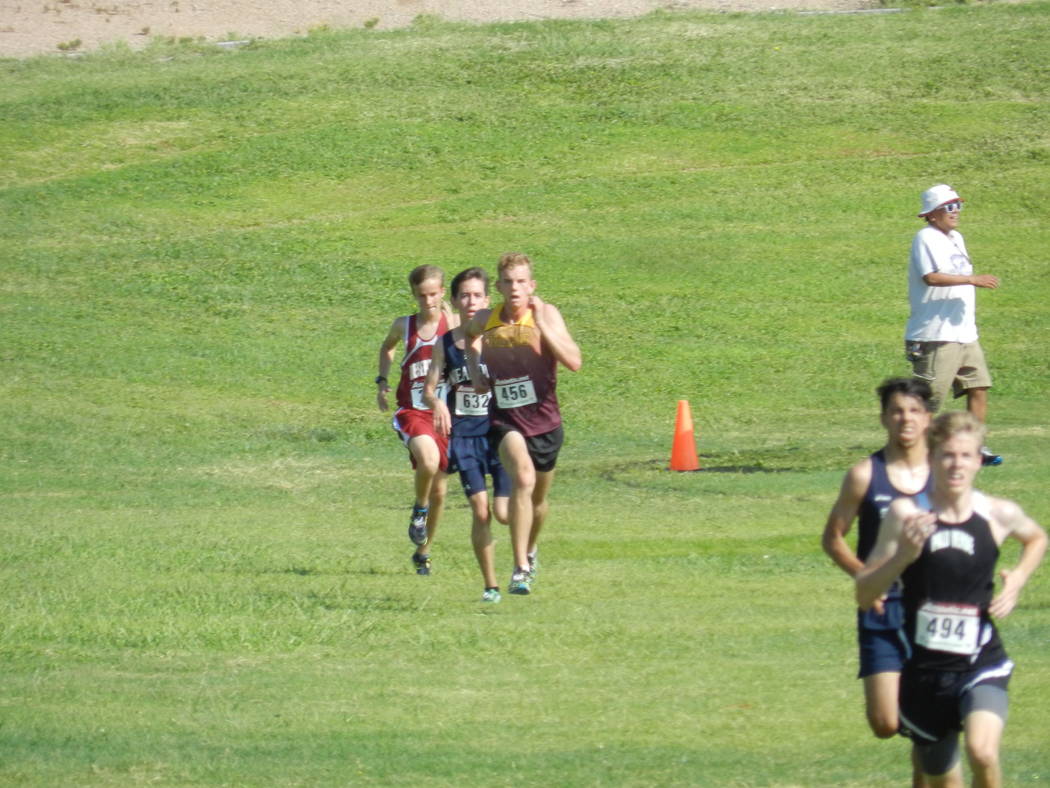 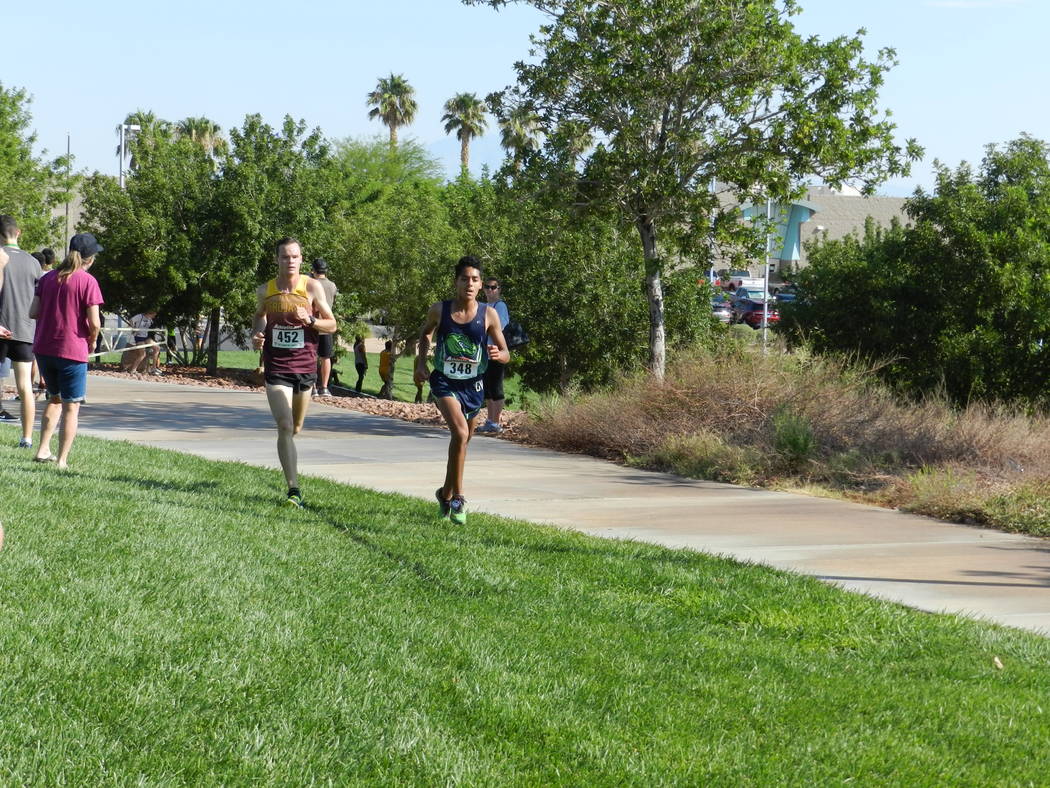 Special to the Pahrump Valley Times Running neck and neck until the finish, Milton Amezcua for Green Valley and senior Bryce Odegard, left, (16:56) for Pahrump Valley. Amezcua won in the final seconds of the race (16:40). 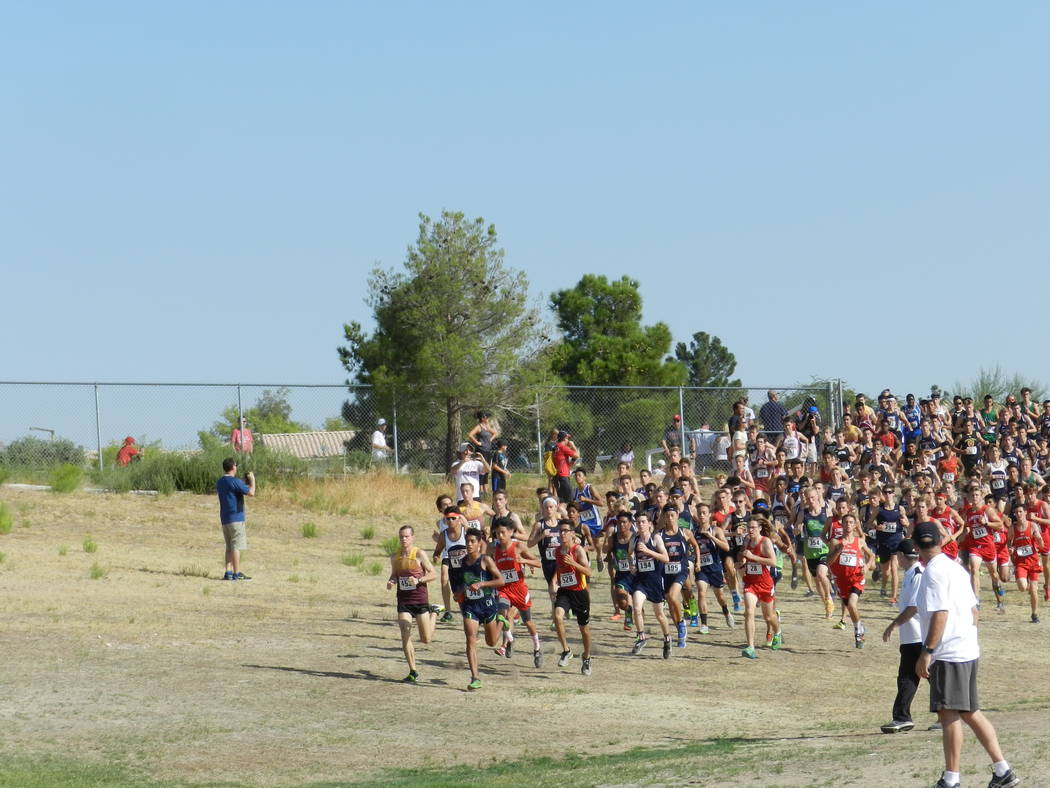 Special to the Pahrump Valley Times The giant pack of runners at the beginning of the Labor Day Classic in Las Vegas. In the front is Milton Amezcua of Green Valley and Bryce Odegard of Pahrump. 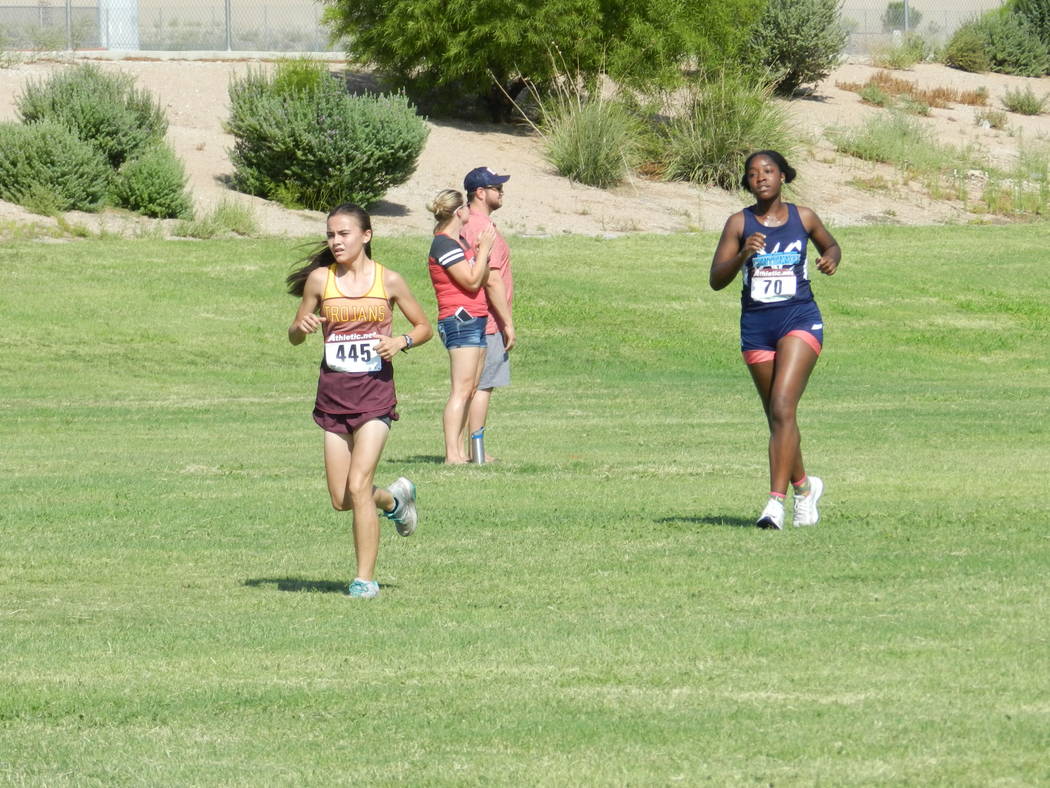 Special to the Pahrump Valley Times Senior Grace Plumb was the first girl to cross for Pahrump Valley in the 11th-12th grade girls, finishing 30th out of 108 runners (24:08).

It came down to the last few seconds of the Labor Day Classic cross-country meet with Pahrump Valley senior runner Bryce Odegard and Milton Amezcua of Green Valley leading the 148 runners down the stretch. Amezcua pushed forward in the last seconds to beat Odegard for the win (16 minutes, 40 seconds).

“I shouldn’t have lost the race,” Odegard said. “I did a poor job preparing for it and he shouldn’t have been able to cruise to the finish like he did. But we went out a little too hard, and he knew it too. When we hit the mile mark, coach Erik Odegard told us 4:55 and Amezcua turned to me and asked if that was the mile and I said yes and he said, ‘Oh shoot.’ So we went out too hard and I was not prepared well enough. We should not expect many more races like this one.”

Odegard is the best

Regardless of Odegard’s performance at the Labor Day Classic, the runner is finally being noticed by Las Vegas schools as a runner to be respected. A Thursday Review-Journal story called him one of the best runners in the region, saying, “Southern Nevada’s best runner might not be where you expect.” This recognition comes after Odegard beat some of the best cross-country schools in the region in the first big invitational of the year, the Red Rock Invitational on Aug. 26 and then again at the Labor Day Classic.

“I am still pleased with the performance overall of all the boys,” the coach said. “I am happy with their performance, but we just have to improve our finishes and not let guys pass us at the finish. Also I would like to close that gap between Bryce Odegard and our next best runners, the Sonerholm brothers. The gap is too big.”

During this particular race the gap he referred to was a minute and 41 seconds before the next Pahrump runner, senior Layron Sonerholm (18:37), crossed the finish line. Sonerholm was 34th.

Palo Verde took the team competition with 93 points, Green Valley was second with 104 points, and Desert Oasis was third (138).

Pahrump finished ninth (208) among the mainly Class 4A schools participating and was first of all the 3A schools.

The girls cross-country team at the Labor Day Classic

“The girls are doing well,” Kolodzieczyk said. “I like how they are all running. Katherine Goodman has made some great improvements and we have Diamond Sonerholm, who will join us when she has 10 practices in.”

The cross-country boys team defeated three other teams, all Class 4A. Senior Bryce Odegard helped his team to the win by finishing first on the 2.5-mile course out of 73 runners (13 minutes, 19 seconds).

The Trojans were the only 3A team in the mix.

The girls finished third with 53 points

The Trojans next meet will be at the Larry Burgess Las Vegas Invitational on Sept. 9 at 8 a.m.