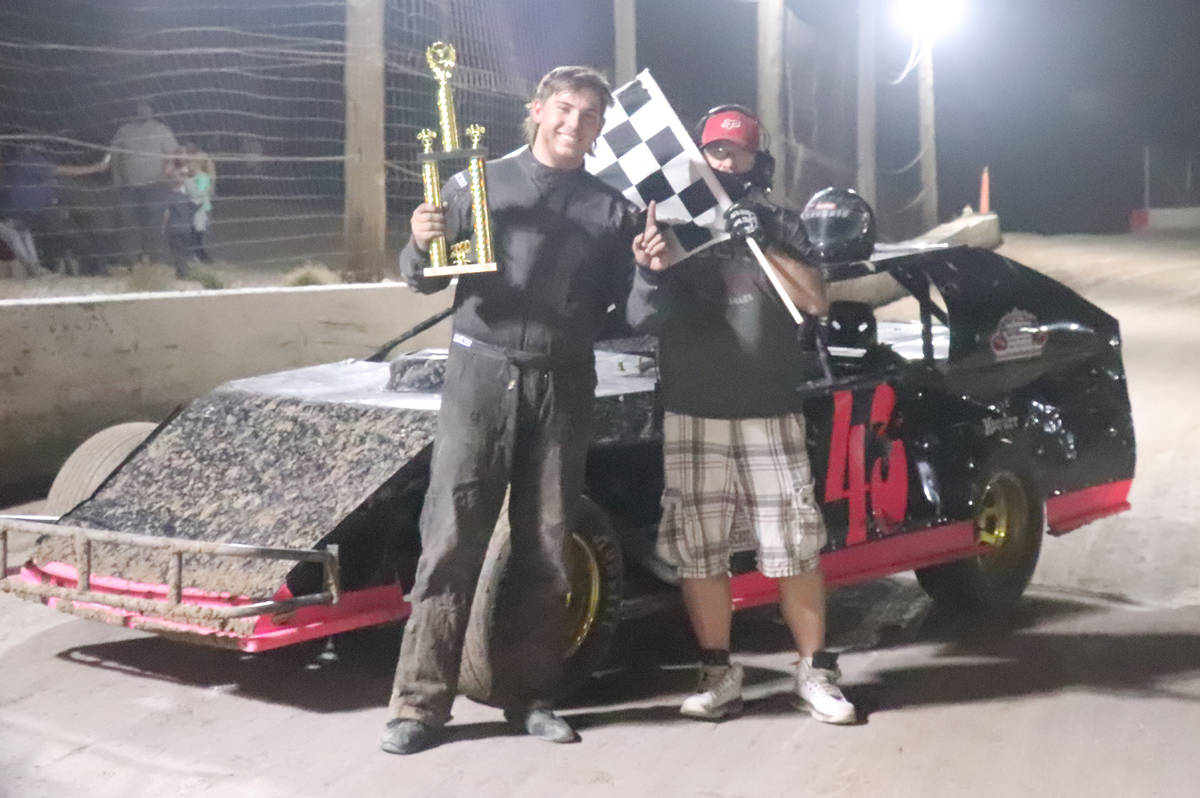 Digital Storm Photography/Special to the Pahrump Valley Times Brady Gladd holds his trophy after taking the checkered flag from Dale Geissler in the Modifieds race Sept. 26 at Pahrump Valley Speedway. 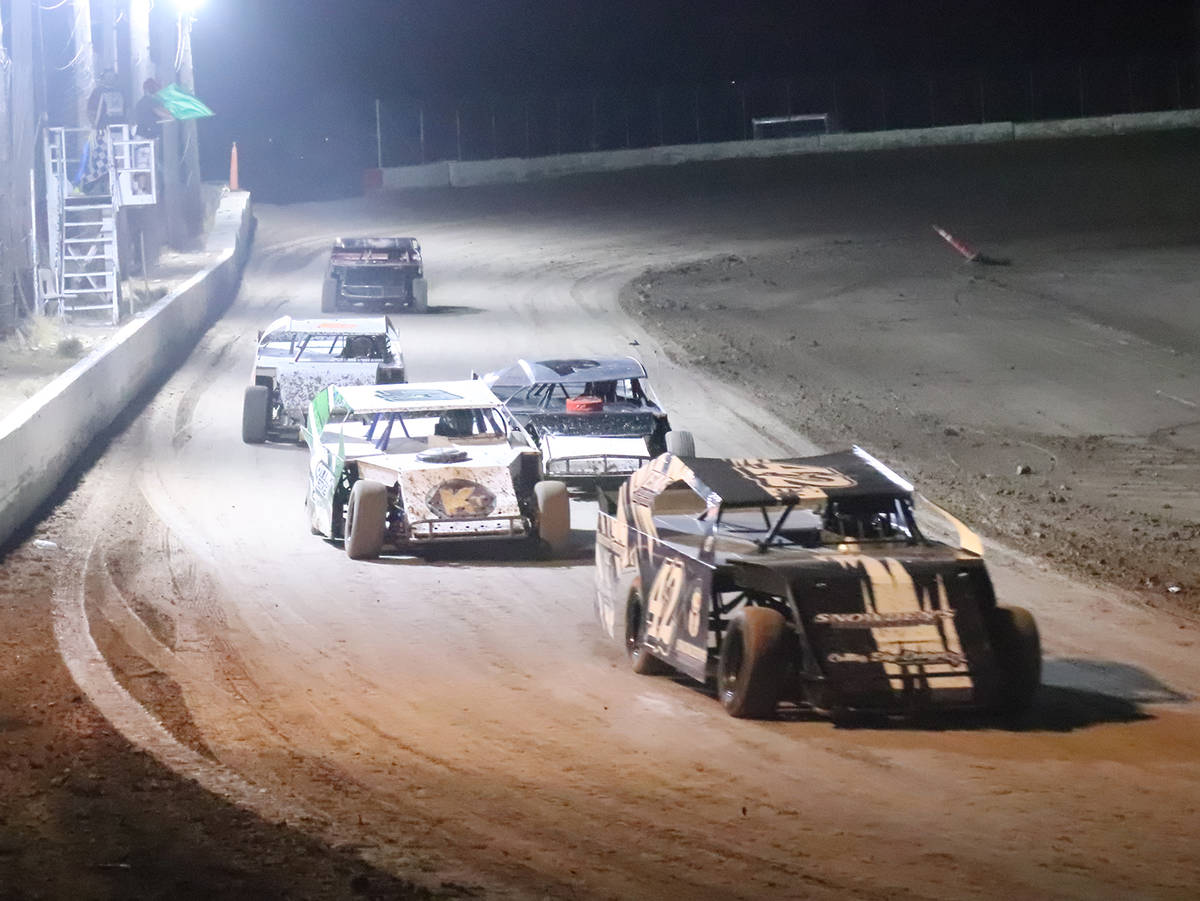 Digital Storm Photography/Special to the Pahrump Valley Times Sport Mod drivers hit the track as racing was back Sept. 26 at Pahrump Valley Speedway. 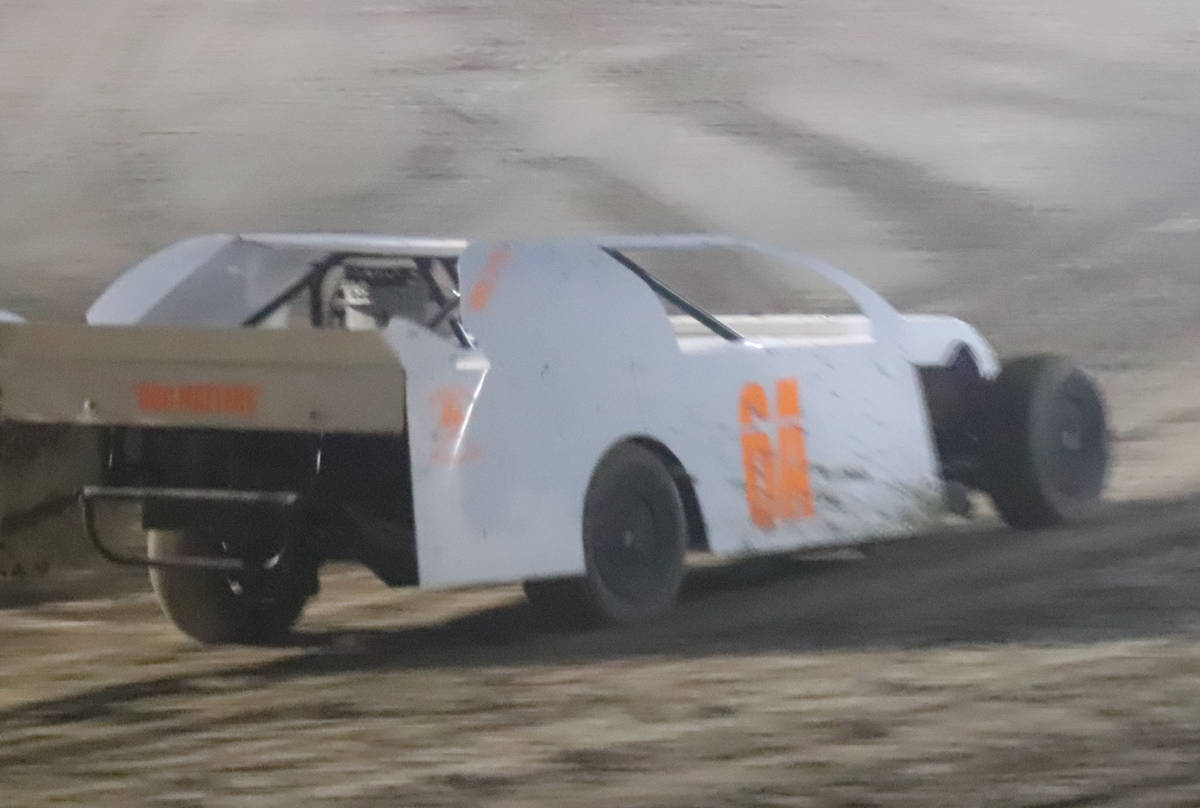 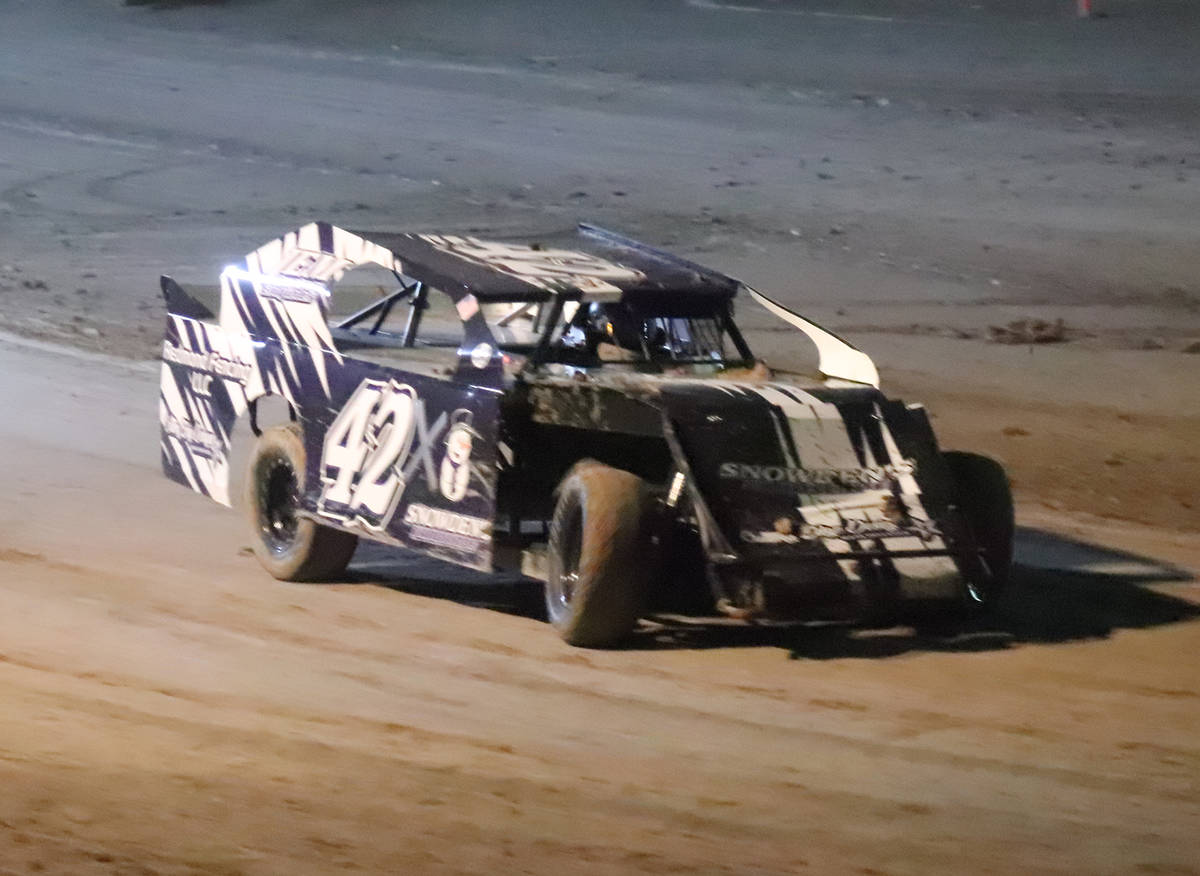 The tightest race this season at Pahrump Valley Speedway is the Super Stocks, in which a one-spot advantage on a given Saturday night can mean a one-point difference in the standings.

That’s exactly what happened Sept. 26, as Dale Daffer took a one-point lead at the top of the season standings by finishing second to Jim Wulfenstein.

Daffer pocketed 36 points for that effort, one more than Ron Moffatt earned for taking third place, and that pushed Daffer to a 201-200 edge for the year. Wulfenstein, who has raced just twice in Super Stocks this season, moved into sixth place with the win.

Timothy Murphy is entrenched firmly in third place with 164 points after finishing fourth, as neither Tyson Talkington nor Darius Mann, fourth and fifth in the standings, ran that night.

There are 34 Mini Stock drivers in the standings, the most of any class, and Brandon Jones took the checkered flag to slip into fourth place overall by three points over the idle RJ Smotherman. Richie Hearn finished second in his fourth Mini Stock race of the year, and Dylin Smotherman moved into sixth place in the standings by taking third.

Joel Dean has a healthy lead in the Sport Mods, and he added a couple of points onto that edge by winning that race. While Dean is closing in on a hundred-point lead, the next three drivers are in a tight battle.

Brady Gladd solidified his hold on the Modifieds with his victory, increasing his season point total to 275. Vinny Raucci, running for the second time this year, finished second, and Brad Hopkins, who sits in eighth place, finished third in his third Modified race of the season.

Mark Daub added a point to his lead in Coupes over Daniel Bruner, as they one-two again. Red Kowal, in his second consecutive race after not running Coupes all year, finished third.

The Mini Dwarfs are always a crowd-pleaser, and on this night the speedway featured two classes of them.

In the Mini Dwarf Junior race, Kendra Jones came out on top, beating out Ryder Reynolds and Halen Sunter. They were followed by Skye Plunkett, Riley Stringer and Rafael Flores.

Racing returns to Pahrump Valley Speedway on Saturday, Oct. 10, with Mini Stocks, Super Stocks, Coupes, Hobby Stocks, Modifieds, Sport Mods and Micro Sprints on the card. Racing begins at 7 p.m. Adult tickets are $10, $8 for over 55, $6 for children aged 6-14 and free for children under 5. A family six-pack for two adults and four kids under 14 is $30.