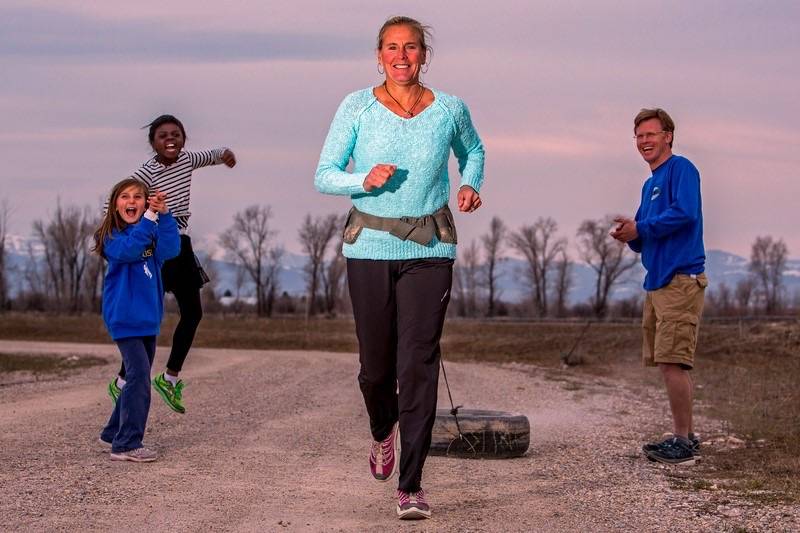 Special to the Pahrump Valley Times Lisa Smith-Batchen uses a tire to strengthen her core and toughen up her legs for the long mountain pass runs in the Badwater 135 race.

Already in the Badwater Hall of Fame, Lisa Smith-Batchen is still motivated to run Badwater at 57.

She said what keeps her coming back is getting that 10th finish and she feels drawn to this place.

“I think I lived in Death Valley in a past life so I think there is something spiritual about Death Valley,” she said. “Really, there is no way you can beat the desert. Every time you cross it you learn something new.”

Lisa Smith-Batchen, a nine-time finisher who was the women’s champion in 1997 and 1998, will be going for her 10th finish this year. She has also run from Las Vegas to the Whitney summit and in 2014 she did a Badwater double, which means she ran from the start to the finish and back again.

Highly motivated to finish this year

She couldn’t finish last year because the heat got the best of her.

Today, she feels like she knows how to run this race and won’t be thinking of last year.

“I feel confident and well versed in how to run the race,” she said. “The race is hot and that makes it difficult and a different race and therefore you have to train for the heat.”

She says the key to surviving such a race is your crew.

“The crew takes care of you and they have your life in their hands,” she said. “They are a big part of the race for it’s a race you don’t do by yourself.”

The race is not for everyone

She said this race is not for everyone. People who get in get invited and have some race credentials to get in.

“The people that run this race are smart to crew it before they run it,” Smith-Batchen said. “That helps people decide if this race is for them without putting in all the money it takes to run this race. God forbid if you get out there and you find out you don’t like it. Those that do race, do so to challenge themselves. The draw is doing something extreme.”

Since she has first run the race there have been so many changes.

“When I first started running the race, many people were still drinking a lot of soda,” she said. “And in 1999 it was so hot that my shoes melted. So technology has changed how we deal with the heat. The shoes are a lot better and the heat training is a lot better.”

The one thing she feels hasn’t changed about the training is the need to be ready and physically fit to tackle all aspects of the race.

One of the things she does to get herself ready to face Death Valley is pulling tires and she feels the tires go back to building a strong core.

“Pulling tires is a huge part of training for the mountain running,” Smith-Batchen said. “How it works is your strapped to a harness attached to 14-inch or 16-inch tires, which wraps around your waist. This works your core. It is like CrossFit training. I would pull the tire up and down the mountain pass roads in full blown jackets. You have to train like that so your body feels like it is at Death Valley.”

She said usually the training for the mountain roads helps but she did remember crawling up to the Whitney Portals one year.

Smith-Batchen said the last miles up the Whitney Portals are tough and a lot of athletes are power walking when they get there.

“I can power walk up to five miles per hour,” she said. “It is a different muscle group and if you don’t work on it then you can’t expect to be able to do it.”

She feels today that she is in better shape than she was when she won the race and she runs the race smarter.

“I know so much more than I did,” Smith-Batchen said. “You just have to be in physical shape because 48 hours is tough. That is how fast you have to complete the race in. It used to be 60 hours but people can walk that. Now you have to be fitter.”

Over the years Smith-Batchen said she has adjusted her training because of her age.

“The older I get, I can’t do those kind of miles,” the veteran runner said. “I used to run 100 miles a week for this race but with kids and a family it’s tough to do that.”

“I incorporate CrossFit training because I feel I can’t just do running and be overall strong,” she said. “I teach three to six classes in cardio core. I work the feet and ankles and take care of the knees. Now less training is better with quality training. I can still do this, just not as fast. Things change with age. I look at this as a sport that is not about winning but participating. I am in it for the journey of self-discovery.”

Diet and fluids during the race

The race has taught her what to eat and drink in this two-day race in the heat. But the knowledge is not written in stone, for what works for her today can change tomorrow.

“I am on liquid protein from STYR Labs,” Smith-Batchen said. “But that can change too. Once I get out there it can all go down the tubes. I may feel great one moment and just when you think you have it, you can have a problem. That is all part of the journey. So I just make sure I have a plan B.”

She said she has had stomach problems six out of the nine times. She also eats a lot of watermelons and uses a product called salt stick.

As far as shoes, she is a Hoka shoe user.

She believes that although she has learned so many things about racing in the desert, she feels she will never really beat it.

“I am fortunate to know so many beautiful people out there,” she said. “This race has all the things you want and that’s what you train for. In the end, you can’t beat the desert. It will beat you unless you learn how to race differently.”