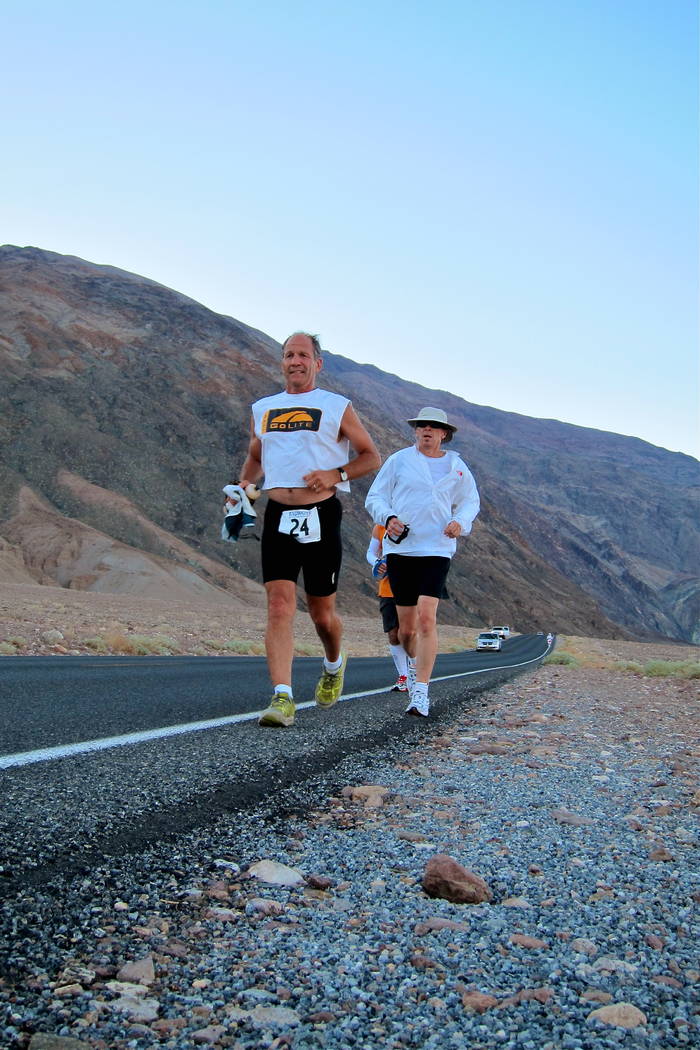 Marshall Ulrich has become a legend in the history of the STYR Labs Badwater 135 Ultramarathon. He ran his first Badwater race in 1990 and since then has won the race four times.

Like the race itself, he has a reputation of being one of the toughest ultramarathoners in the world.

“I have raced 27 times and have finished 20 times and in all my finishes, in a tribute to the original race I continue on to the top,” Ulrich said.

At 66, he will be the second-oldest runner in the race and he is looking forward to this year’s race.

“For me, it no longer is about winning the race,” he said.

Ulrich is known for his ruggedness and his ability to train hard.

Ulrich said heat acclimation and being in top shape gets runners through the heat.

He said when he was winning the race he would run an average of 110 miles per week.

Now he averages 50 to 60 miles per week. Leading up to the race he said he likes to do 50-kilometer races and maybe a 100K race. He also likes to sit in the sauna to get his body ready for the heat.

For the long hills, he likes pulling tires.

“I haven’t done a lot of that lately but it is good for you,” he said. “The tire pulling teaches good running form and also strengthens the core. I am at 66 and have over 100,000 miles and my body has held together and I can still do this race. Today it’s all about staying vertical, about setting goals and keeping in shape.”

Despite the best training though, Ulrich still runs into problems. He didn’t finish last year’s race.

Ulrich says his body doesn’t use water as well as it once did.

“The last half-dozen or so years I’ve noticed that my body retains more water than it used to, causing swelling around my ankles and abdomen,” he said. “My theory is that I’m getting old and my body doesn’t utilize water as efficiently as well as flush toxins.

Last year he battled with dehydration.

“I had been running a fever a couple of days before the race started as well as during the race,” he said. “I had a low-grade fever when I was running the race. I was running cold and I actually was over-cooling. I was so dehydrated. What that did was made me sweat during the race too much and it caused dehydration beyond what I have experienced in the past. That it made it difficult to continue and so I had to quit after mile 60.”

The bottom line is that even after racing so many years in Death Valley the heat still affects him.

Then there are the physical hardships of running in the heat.

He talked casually about having his toenails removed one year.

“I had my toenails removed because of a problem I had while racing,” he said. “Some other racers have done it and others may think this is extreme, but this is my sport.”

He said the heat causes a lot of other problems with the feet. The heat radiating off the ground can cause the feet to swell. It gets so bad that he has another pair of shoes a size larger on hand for the swelling.

The swelling could then cause blisters too.

“I once had a blister the size of a silver dollar,” the veteran racer said. “To deal with that I cut the insides of the shoe out. There are other ways of dealing with that. Some people cut the fronts of their shoes off. You sacrifice for your sport even though the shoes are costly.”

Ulrich said when he gets a blister he tries to block out the pain.

“It’s hard, you just have to deal with it, there really is no thinking about other things,” he said.

This radiating heat as been so bad that he has seen the heat melt thinner-soled shoes. For that reason, he uses only one kind of shoe.

“Marsh is currently running in Hoka Bondi 5’s,” his wife Heather Ulrich said. “He will probably wear the one same pair for the entire race. The only reason he would change is if his feet swell; then, he may go to a shoe one size larger (he has the “same” shoe in two different sizes, 10 and 11). The difference with Hoka is the cushioning, which is better than any other shoes he’s tried.”

Now that he is not racing to win, he comes to Death Valley for other reasons.

Death Valley has also been about reconnecting with old friends. “It’s like a big family reunion,” he said.

In past years Ulrich has also realized that running ultramarathons have given him a lot of satisfaction.

“Running has taken me away from family, so there are positives and negatives with running so much,” Ulrich said. “One, the kids saw what drive can do and where focus can take you. The negative is that it also took me away from them. There has to be moderation in there.”

“Would you climb Mount Everest if you couldn’t tell anyone after you did it,” Ulrich said. “Are you doing it for the right reasons? Can I not say anything and just be satisfied with the pure satisfaction of knowing that I did it?”

He said as he gets older his priorities have also changed.

“I have found that it is important to retain the family, which translates into more days off,” Ulrich said.