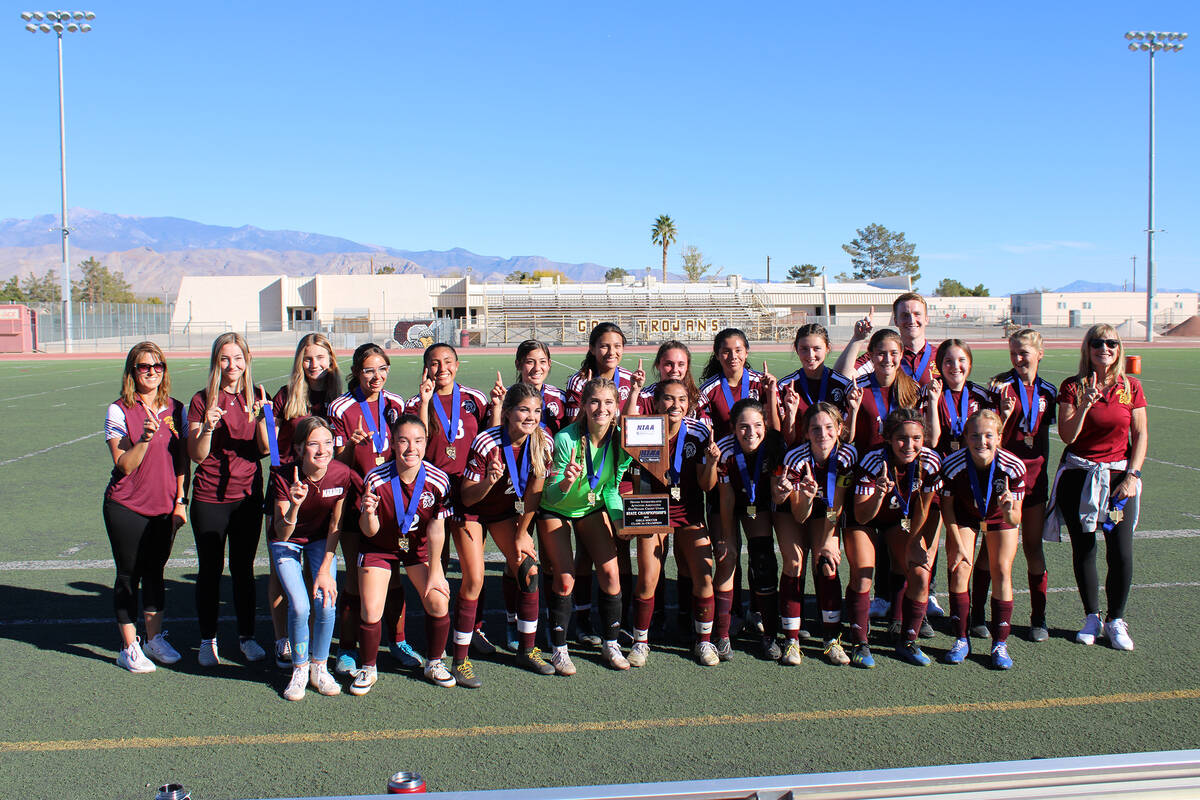 Danny Smyth/Pahrump Valley Times The Pahrump Valley girls soccer team won the 2021 Nevada 3A state championship. They begin their title defense on Monday, Aug. 22, when they take on the Faith Lutheran Crusaders.

Head coach Julie Carrington will be holding tryouts Monday and Tuesday, Aug. 8-9, from 4 to 6 p.m. on the main football/soccer field.

The week of Aug. 1-5, Carrington will be holding heat conditioning each day to help her players better acclimate to the weather to prepare for the season. This conditioning will take place from 4 to 6 p.m. each day.

The Trojans finished last year with a 19-1 overall record and a 10-0 league record. Their only loss of the season was against 5A Faith Lutheran High School in the first game of the season.

Pahrump Valley would finish the season on a 19-game winning streak, ending the year with a 1-0 victory over South Tahoe for the 3A Nevada state championship.

The Trojans will be returning almost their entire team, including 10 of the 11 starters from last season. The only departing seniors for the Trojans from last year’s title-winning team are Kiara Ramos, Alexis Sandoval and Sierra Steele.

The offense was led by one of the top forwards in the state in Adryanna Avena. She finished the 2021 season with a state-leading 39 goals and added 20 assists.

The defense was anchored by sophomore defenders Paris Coleman and Emily Lewis. They combined to have 145 steals last year.

In addition to a strong defensive back line, the Trojans also had one of the top goalkeepers in the state. Avery Moore allowed just 10 goals in her 20 games played, six of which came from Faith Lutheran in the opening game.

Moore also led the state in shutouts with 15 clean sheets. She ended the regular season with a 9-game shutout streak before allowing a goal in the Southern Regional championship game against Boulder City.

The Trojans will begin their title defense with an away game against Faith Lutheran on Monday, Aug. 22. Kick-off for that game is scheduled for 4 p.m. Pahrump’s first home game of the season will be on Wednesday, Aug. 24, when they host Virgin Valley.

Following those games, the Trojans will participate in the Spring Creek Cup, a tournament taking place at Spring Creek High School on Friday and Saturday, Aug. 26-27.