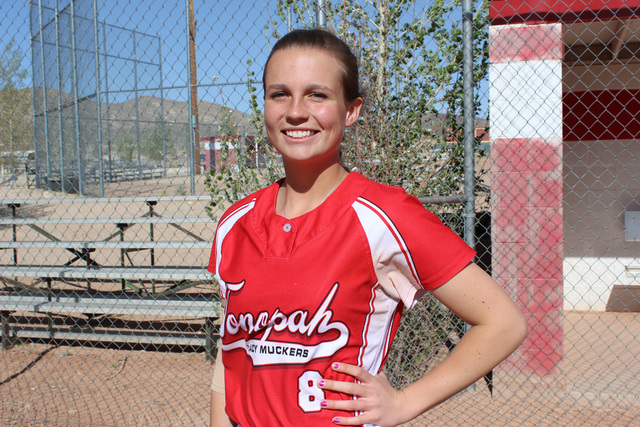 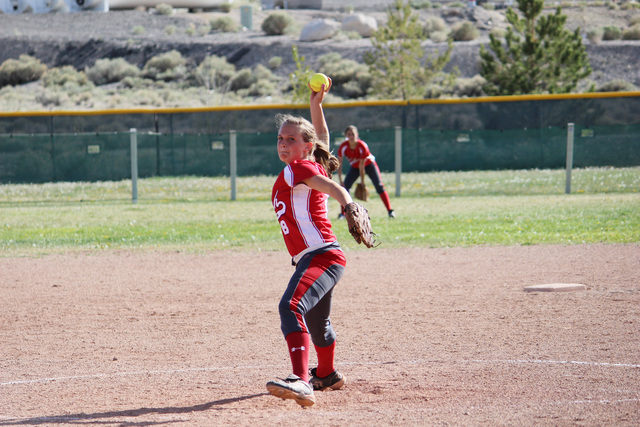 Division IV softball regionals are in full swing and this year Nye County will send its only representative to the regionals, the Tonopah Muckers.

Like any softball team much of the team’s energy is centered around its pitcher. For Tonopah it’s junior Megan Donham. She has been pitching for the Muckers since her freshman year.

Softball is the sport that she has spent the most time with. She said she started playing softball in grade school.

“I started playing when I was old enough to put on a glove and stand,” Donham said. “My biggest influence for my softball has been my mom because she was a softball player too in high school and she pitched for McQueen. She could have gone to college for softball, so she is always encouraging me. She always tells me that she doesn’t want to make me do it, but I have always wanted to and she really helps me all the time.”

Donham says the most influential coach she has played for is Ken Jose. She has had Jose since youth softball. Jose coaches the high school team.

“He has been with me the longest. He expects the best from you and if he knows you can do it he is not afraid to voice his opinion. He is very serious.

Jose has a lot of confidence in Donham.

“As a freshman I saw she was determined. She was not a vocal person. She just worked hard and didn’t say anything. She also did everything you asked of her. She was a good strong athlete and her looks were deceiving. Megan looked more feminine than athletic but she is also one of our strongest power hitters,” Jose said.

Donham’s coach has also helped her to improve as a pitcher.

“Over the years she has been very determined to become a better pitcher. Last year she gave up basketball to work on her pitching. I told her when to show up and she did that. We have not worked on a lot of junk pitches. We just wanted her to get the ball down and hard. She has been pretty successful at that,” her coach explained.

According to Jose, Donham never stops trying to improve as a pitcher.

Donham has one more year of softball with the Muckers. She is one of those players that still gets nervous every time she pitches. She said when they faced Eureka her nerves were off the chart.

“I was nervous and had butterflies in my stomach and my dad said this helps get the adrenalin going,” she said.

Donham loves the competition of all sports. If you were to ask her what her favorite sport is, that answer would depend on the season.

“It can be hard to tell because my favorite sport is the season I am in. If I had to choose, I really love volleyball but softball I love just a little more,” she said.

Of course life is not all about playing a sport. Donham does recognize that she can’t play forever. The junior expects to go to college to study. She says she has no clue what she wants to study, but it will come to her. She said at one time she wanted to study to be an archaeologist. That boat has since passed, but she still loves science.

“When I get out of high school I am going to college. I am going to try to get into history or science. I am not sure what I want to focus on yet. I need to plan because it is coming faster than expected. I have a 4.5 GPA and take four honors classes. I have to start planning for college because it has taken me by surprise,” Donham explained.

This year has been a tough year in just learning to cope with life.

“The death of Harvey Gonzales really hit us hard. I think everything happened for a reason and it really brought this town together. I think it was so nice to see our team as one family. Harvey was such an emotionally involved person and I know he is in a better place,” Donham concluded.