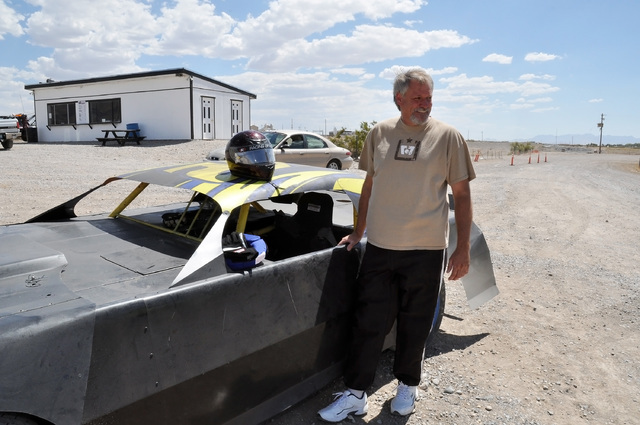 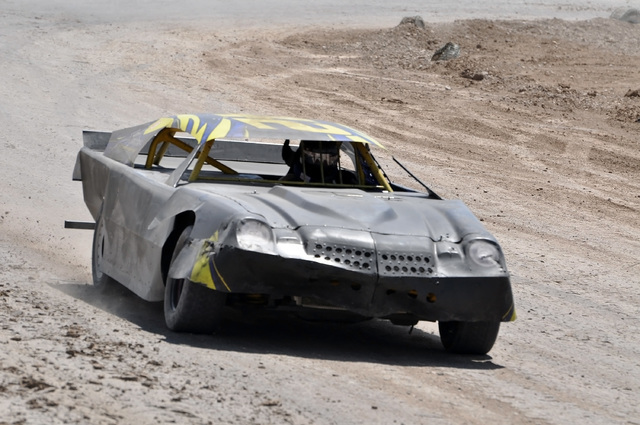 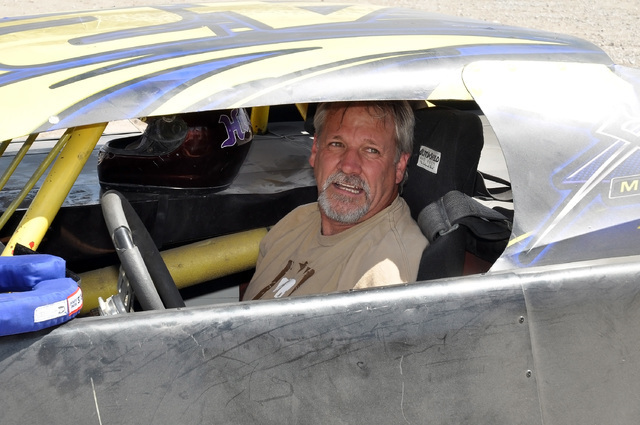 A three-time Pahrump Valley Speedway Dwarf champion is taking a gamble by abandoning his former class and changing to a Super Stock.

Racer Brett Gamble made his move and believed that the new car would improve his enjoyment of the sport. Every driver has a personal preference on class and Gamble at one time thought the Dwarf Class was for him.

“I thought that was unfair because the two cars really are not alike at all,” he said.

Most people would think such a move is minor but for racers to change classes is like starting over.

“It will take at least a year to get used to this new car,” he said.

So Gamble sold his Dwarf Class car and sat most of this season out.

“I did some announcing and then joked that I was a washed-up racer because in football that’s who you see in the announcing booth, all the old-timers,” the racer said. “I didn’t want to be washed-up. I missed racing after three to four months and finally called my step-dad and said ‘we need to get a new car.’”

The call resulted in Gamble buying a Super Stock race car from Dan Snowden, a Modified racer at the Pahrump Valley Speedway.

“I bought this class of car instead of a Modified car because of cost,” Gamble said. “I couldn’t afford a Modified car. Besides, I think if I had one of those I would kill myself in one of them. I am not so sure I could control one.”

Believe it or not, Gamble says his Dwarf car is faster than the Super Stock.

“The Dwarf has better acceleration, is a lot lighter than the Super Stock,” Gamble said.

He said the Super Stock was slower, even though it has more horsepower.

Getting into a bigger car and more horsepower means Gamble will have to learn how to drive the new class.

“The Super Stock takes turns differently,” he said. “Coming into the turn for a Dwarf, I slid into the turn using the brake, with Super Stock, it’s totally different and probably will spend a year learning how to do that.”

Besides the turning, Gamble said the car was just an entirely different feel.

“I am six foot, three inches tall and getting into a Dwarf is a lot easier. It has a door, whereas the Super Stock you have to climb in through the window,” he said. “It’s just harder. But once I am in there is a heck of a lot more room.”

Gamble took his new car five laps around the track on Wednesday to see how it handled. He feels after the laps that he will be learning how to race his new car at the next race.

“I drove it yesterday and I feel safe to race it,” he said. “I will just follow the other racers and when I get enough nerve to pass I will.”

He said that’s how he learned to drive his Dwarf. He had a hard time with the turns.

“It took me a while to turn and I was always spinning out in my Dwarf at the beginning,” Gamble said. “And you only get two caution flags, so they were always giving me the black flag. They used to call me the ‘black flag racer.’”

In addition to the cost of the car, Gamble also considered a number of people in the class.

He said there were four guys racing the Super Stock Class on average this year.

The amount of cars racing Super Stock had declined in recent years, but to Gamble this didn’t matter. He wanted a class he said where the numbers were small, and he can learn quickly.

“It’s just easier to learn when there is a smaller amount of drivers on the track,” he said.

“I do learn a lot when I follow racers that I am trying to beat.”

Gamble believes that racers also learn a lot from talking to other racers.

Gamble said one year he was in a grudge race with Jason Pike and Mark Daub and he got to talk with Pike after the race.

“I raced my Dwarf car with a Modified and a Coupe,” he said. “And I lost to Jason Pike, who was driving a Modified and after the race, he said he beat me because I left the inside open and that allowed him to pass. People just give you great advice. I am just excited to learn new things.”

Gamble said he would try to race the rest of the season in his Super Stock.