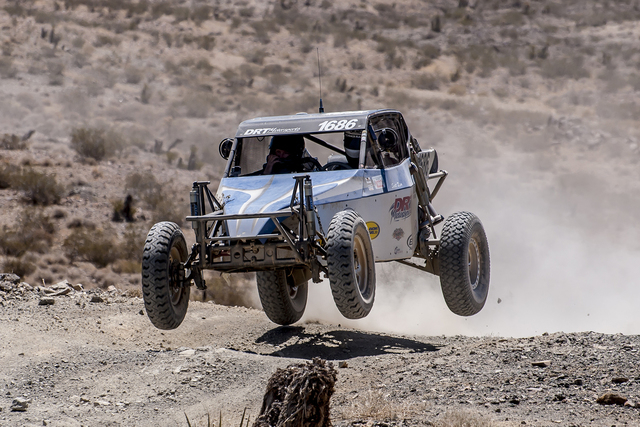 The General Tire Best in the Desert Vegas to Reno race is just around the corner, starting on August 14. It is the longest off-road race in the country. One family tells what it takes to be in off-road desert racing.

In desert racing, few racers are true professional racers where they actually get paid to drive. Most of the racing teams you see in Best of the Desert, Southern Nevada Off-road Racing Enterprises and Mojave Off-road Racing Enthusiasts are made up of family race teams. Deen Racing Team or DRT Motor Sports is one such family team.

The team consists of four Deen brothers from San Diego, California. These brothers come together to keep their racing team competitive. Eric is the oldest, then Scott, Daniel and Steven. Eric said each brother plays a solid role on the team and brings different skills besides driving.

“We do all the work on the car ourselves. I wired our car, my brother Daniel fabricated it, Steven does all the paint and body work and Scott is a jack of all trades,” he said.

Eric and Daniel do the main driving while Scott and Steven are backup drivers. Even the Deen’s parents do their share for their boys.

“My dad contributes too, probably more than I ever recognized. He contributes more than anybody I know. Even though he has a hard time getting around because of knee surgeries, he is always giving 100 percent support. My mother also does her share. She makes all the lunches. They are both great,” Eric admitted.

Daniel said when the brothers get together for racing it’s like a family reunion and it makes them closer as a family unit.

“I just moved up to Long Beach, Calif. a year ago. A good example of racing bringing us closer together is that I wouldn’t come down that often to see my brothers if it were not for the car being at my father’s house in San Diego. My dad likes keeping the car at his house because he gets all the boys over there. It’s a chance to get us all together and have a good time. Racing makes us even closer even though we are a close family in general,” Daniel said.

Eric is 36 and has been interested in desert racing since his father Win took him to see the Baja 500 when he was in eighth grade. He has raced in desert off-road races for the past 16 years.

“I am into the racing, all aspects of racing. Even the Internet drama. I watch the Internet and its like a soap opera to me,” Eric remarked.

He said he has done three races in the Best in the Desert Series, the Parker 425, the Mint 400 and the Vegas to Reno. On the Vegas to Reno he said he was a co-driver. He has also raced the Baja 500 and 1000 and has done numerous races for SNORE and MORE. He was even rookie of the year in 1997 with FUD and won their championship that year and in 2004 he won a championship with the Baja Coalition Series.

Eric says he races in the 1600 class with unlimited suspension and it is very much a driver’s class.

One of the reasons he enjoys racing so much is the people he meets while racing. “This is a very expensive hobby and what makes it great is the other racers. I never ran into a fellow racer that was not willing to help another racer. It’s first their car and then second is helping the guy next to him. The car comes into a pit with a flat and you have other crews helping to change a tire. The racing community as a whole is a good community,” Eric told the PVT.

He says the class is above garage mechanics because two thirds of the class buys a professional chassis and the other third have a home built chassis or are one-offs.

DRT racing had their engine professionally built. Eric and his brothers can handle all the mechanical aspects and demands that racing puts on the car.

The class they race in depends highly on the driver’s own skills to complete the race. It’s a limited stock 1600-Volkswagen motor. The cam is open and it’s a stock crank. The heads are stock and untouched. The intake manifold is stock and untouched. One can add after-market pistons and after-market rods, but racers are limited to whatever they can get out of a stock motor. The class has 86 horsepower. This class is known as the Class 11.

The car has top of the line Yokohama tires in the rear, with 33-inch truck-grade tires in front. The team runs Fox suspension. They have 12-inch Foxes in the front and 3-inch Foxes in the rear. The quality suspension allows the vehicle to launch as high as 15 feet off the ground and land. “If you don’t screw up and hit something, the tires will last the race. We don’t have enough horsepower to spin the tires and screw them up. We get airborne all the time and that is the best part. We can get pretty high and that depends how brave you are,” Eric exclaimed.

Eric likes all desert off-road racing but says the Best in the Desert Series is the best of the best.

“Casey Folks and the Best in the Desert put on a good program. His courses are well marked and you know where you are at all times. SNORE is more affordable and you get what you pay for and they put on a an excellent program, but the amenities you get when you race Best in the Desert you just don’t see it with SNORE,” Eric said.

Casey Folks told the PVT he puts on some of the best desert racing in the country.

The team throughout the years has been in some tough spots. They don’t always come out smelling like roses. Eric described one race where they broke a spring. He said, “In 1999 we were racing down in San Felipe and the rear spring broke and I did not have a spare. We took the shocks off it and welded the suspension solid to the car with a piece of strapping where the shocks would go to keep the suspension from cycling. We did the last 100 miles that way. We were the last official finisher in that race.”

Besides having to be creative, the team also has had some close calls. Eric recalled one time where he lost control of his vehicle down in the Baja 500. “I was right behind another car and was on a graded road. I was going as fast as I could. I hit a whoop section and the car went almost ninety degrees straight off the course. I went through a yucca tree and through barrel cactus. I had to do everything I could to keep the car from turning over and I was able to muscle the car back onto the road. It all happened in a blink of an eye,” he related to the PVT.

Eric has never been hospitalized from racing despite all the close calls. He attributes this to the safety gear which holds him snugly within the cockpit. He said when he did roll the car, he was injured more from falling to the ground when he unbuckles the straps.