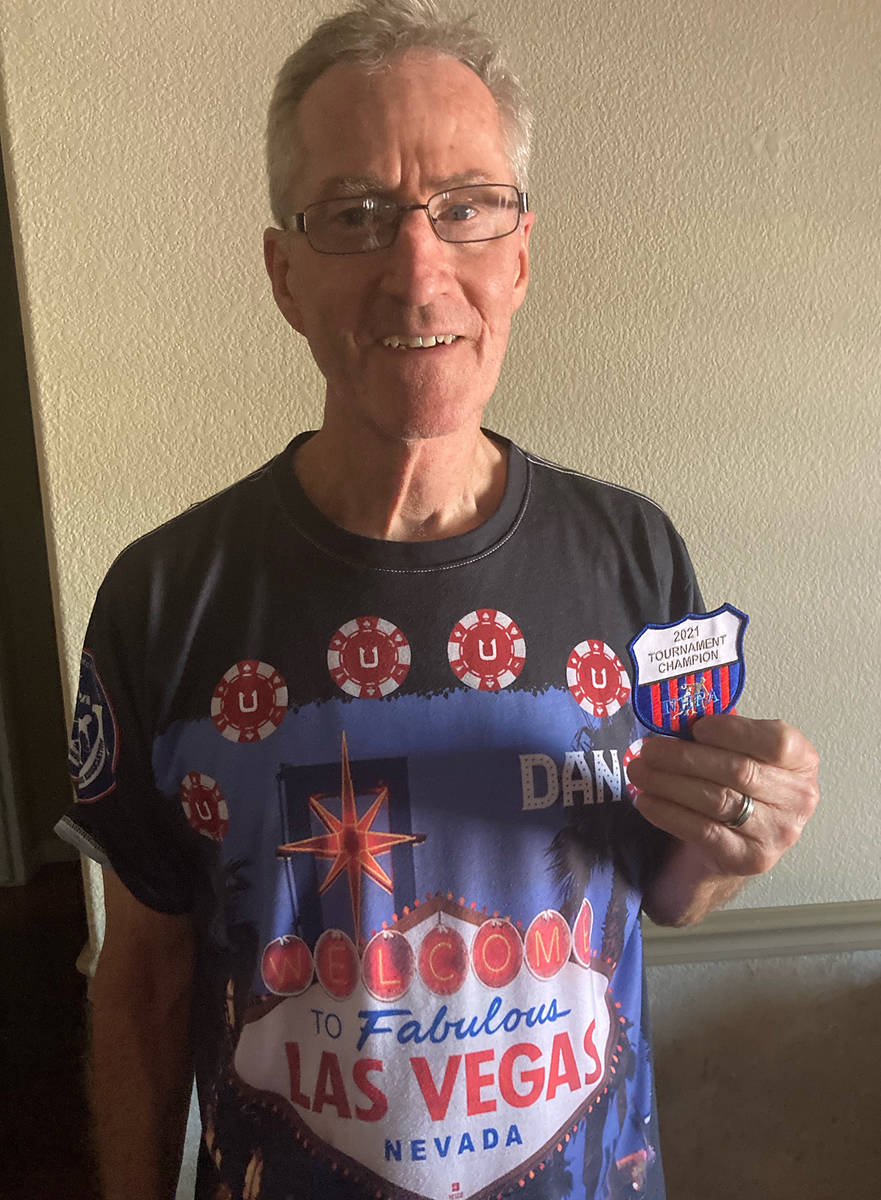 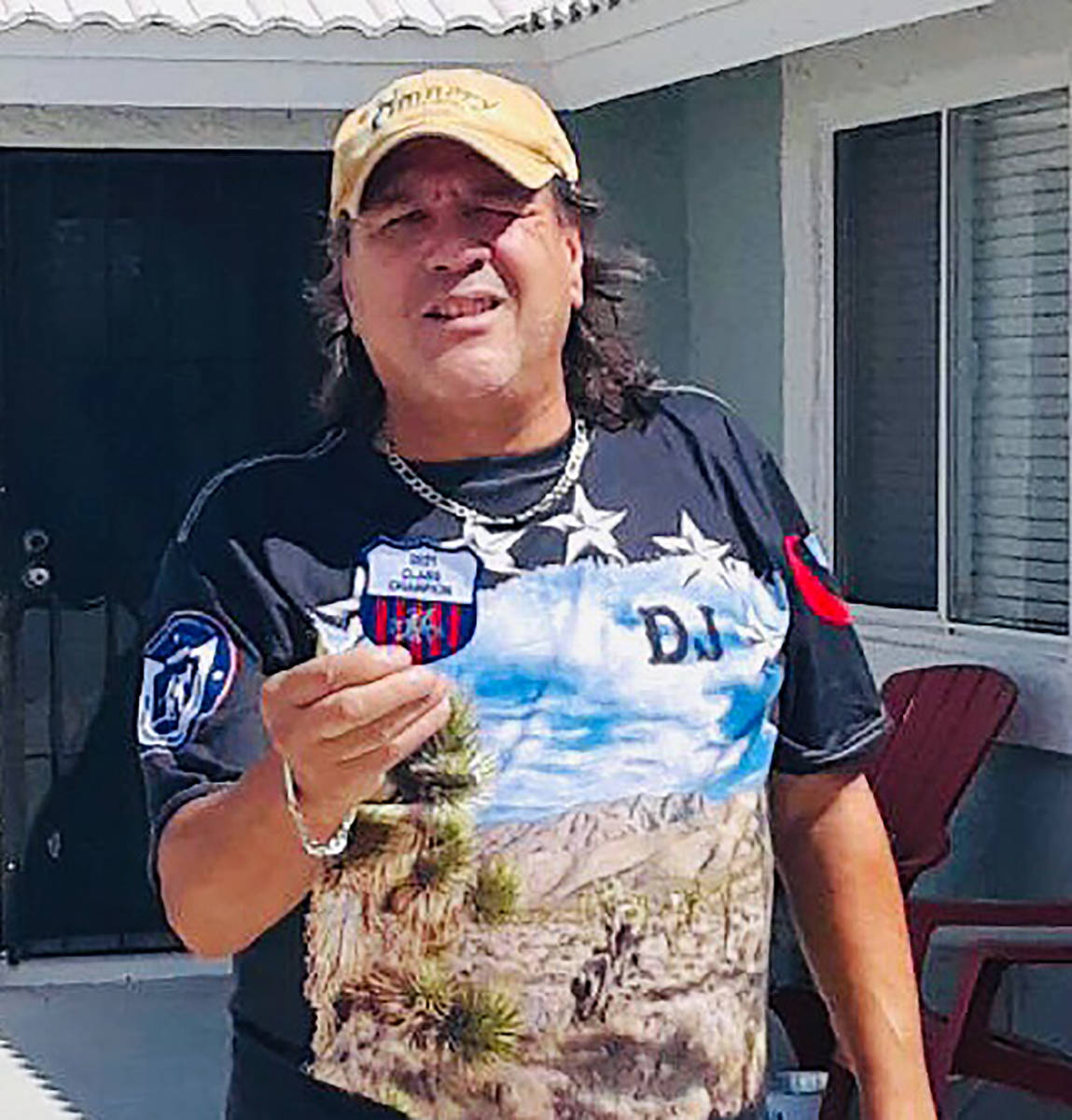 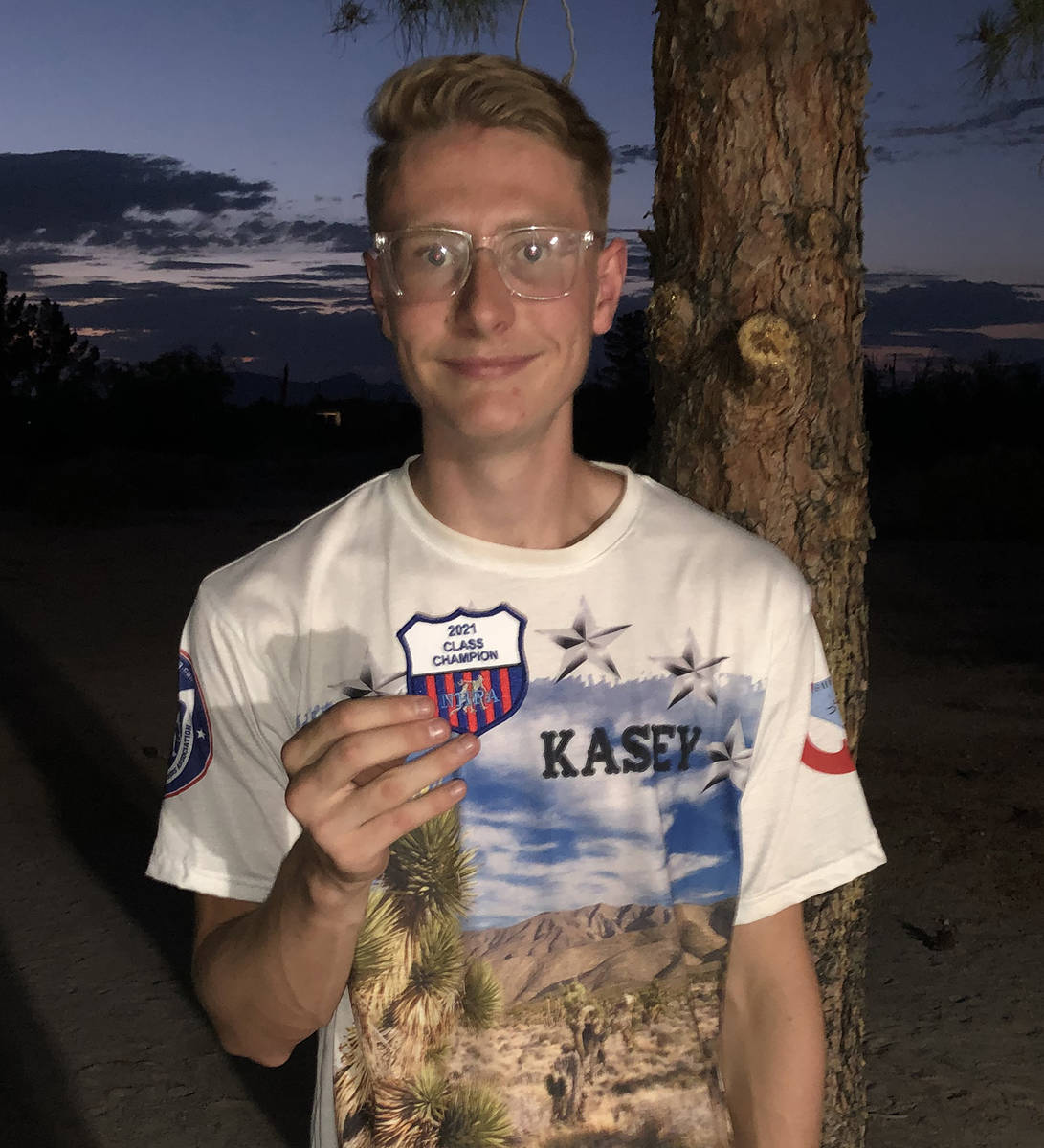 Lathan Dilger/Special to the Pahrump Valley Times Kasey Dilger of Pahrump shows off the patch he won for taking the Class B title at the Ho-Z Classic horseshoes tournament July 3 at Petrack Park in Pahrump.

The two Pahrump residents won their divisions, while Dan Dunn of Las Vegas was tournament champion when the Ho-Z Classic was played July 3 at Petrack Park in Pahrump.

Dilger recorded a season-high 32.5% ringer percentage, nailing 65 of his 200 shoes, to win in Class B. Zuloaga went undefeated for the second consecutive sanctioned tournament, and while he didn’t match his 24 ringers in 200 shoes from the Hot Pahrump Daze Open in June, his 22 ringers helped him sweep six games in Class C to take the title.

Dunn, of Las Vegas, came in just under his entering ringer percentage of 34.0% but still totaled 66 ringers during his five games to win Class A.

Pitchers were back in Petrack Park on Sunday evening, July 4, for the Fourth of July Extravaganza, an unsanctioned doubles tournament.

Sixteen pitchers participated in the round-robin event, with Steve Lopez of Kingman, Arizona, and Denise Johann of Beatty — one of five new pitchers in the field — sweeping seven games to win the title.

Two other new pitchers, Robert Bustos Sr. from Phoenix and Nino Toll of Pahrump, went 5-2 to finish second, while Vance Dilger of Mount Charleston and Mike Dedeic of Pahrump finished 4-3 and placed third.

“We took a break to watch the fireworks show, and the players and their families said it was the best fireworks show ever,” Nevada Horseshoe Pitchers Association President Lathan Dilger of Pahrump said. “I’d like to thank Jessie at American Family Insurance for providing the trophies and to my wife, Debbie Dilger, and Scotty Heer for the barbecue dinner.

“And I better not forget to thank Courtney at the town office for all her help.”

Lathan Dilger said the tournament coinciding with the holiday crowd at Petrack Park led to an unusual sight for a horseshoes tournament.

“And something cool happened,” he said. “The big crowd on the baseball field close to the pits were all watching the tournament and cheering on the players. I’ve never played horseshoes with that big of a crowd watching before, and at night. It was one of the best horseshoes tournaments I’ve been to.”

There will be a lot more people — most of them competing — at the next event on the horseshoes calendar, as the world championships come to Nevada. More than 50 National Horseshoe Pitching Association-approved clay courts were constructed at the Winnemucca Events Center, which will host approximately 1,400 competitors in a tournament that dates to 1909.

Dilger said seven pitchers from Pahrump — himself, Kasey Dilger, Mike Nicosia, Don Brown, Mark Kaczmarek, Dennis Andersen and Rai Adams — are going to the worlds, as are Ken Jose of Tonopah and Foster Kenton of Hawthorne, who is pitching ringers at a 62.5% clip and just missed competing in the highest division in Winnemucca.