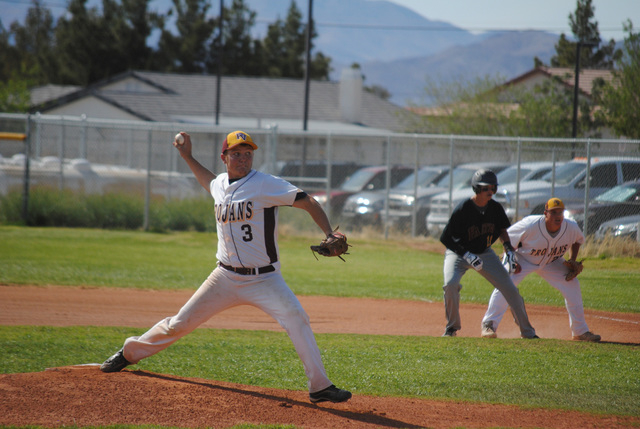 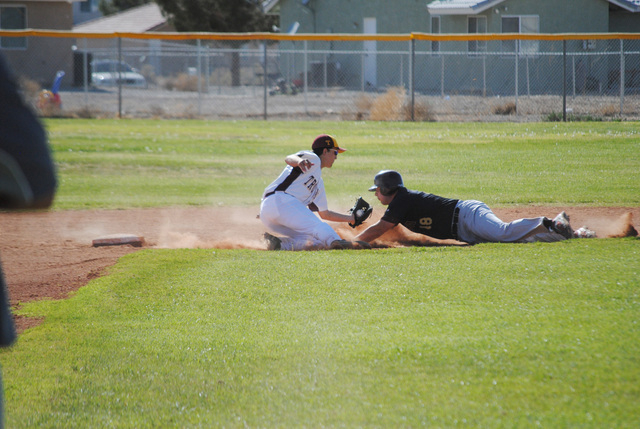 The Trojans baseball team lost its first league game against the Faith Lutheran Crusaders on Thursday, dropping to 10-7 overall and 3-1 in league play.

Faith Lutheran had the better pitching and hitting. They had 16 hits and 12 runs to the Trojans’ 6 hits and 3 runs and both teams only had one error.

Devin Rily was the starting pitcher for Pahrump and didn’t have a bad day. He gave up 3-earned runs in 6 innings and was selected as the player of the game. The bleeding started when Dylan Ault came into relieve Rily and that’s when Faith went through the lineup. Take away the top of the 7th and it’s a 2-run ball game.

Pahrump had no time to cry over spilled milk for the team had to travel down to Mesquite on Friday to play the Virgin Valley Bulldogs.

In that game, the Trojans took out their frustrations on the Bull Dogs with the pitching of AJ Segura, who pitched all 7 innings and gave up just 2 hits with 1 walk and 8 strikeouts. The Trojans walked away with a 2-1 victory.

Segura also helped himself offensively and broke out of his hitting slump, going 3-3 with a double, 1 run and 2 stolen bases. His batting average has jumped in the last couple of games going from .240 to .275.