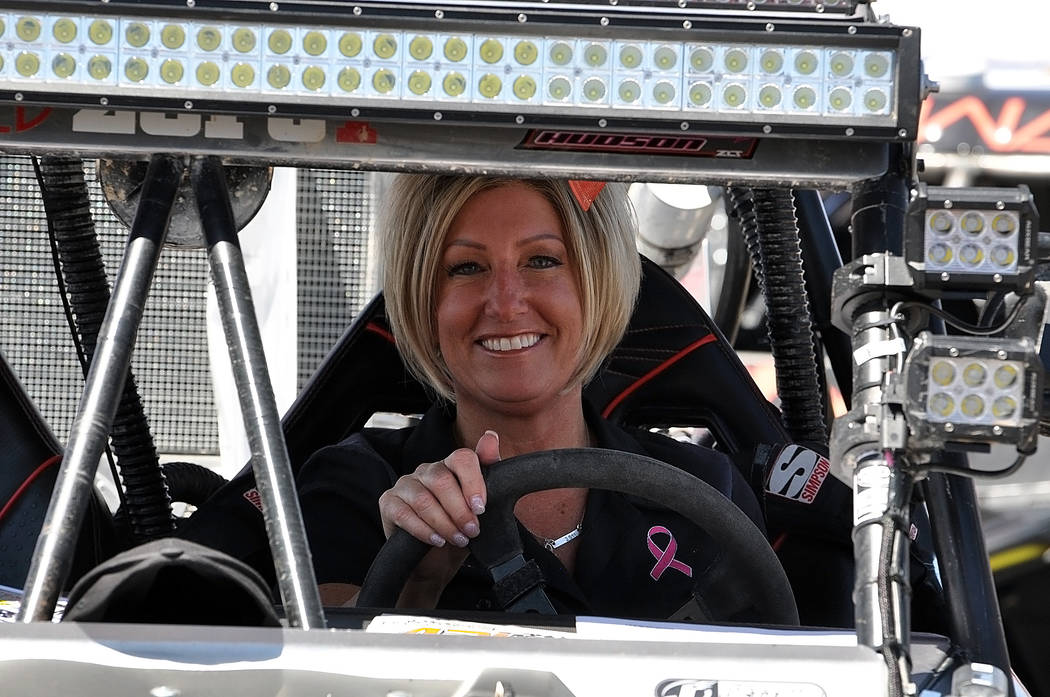 Horace Langford Jr./Pahrump Valley Times UTV Unlimited driver Renee Hudson, behind the wheel at the Texas Station tech inspection on Thursday. She races for the Getting Dirty for the Ta Tas Racing, which raises money for breast cancer.

BEATTY — In a male dominated sport, Renee Hudson definitely can race with the guys.

Hudson, a resident of Lake Havasu, Arizona, finished in second place in the UTV Unlimited, (No. 2911) with a time of 14:15:10.2 and was 94th overall out of 349 race teams during the General Tire Vegas to Reno race on Friday, which is the longest off-road race in the country.

“Well, we did it,” Hudson said. “We finished 94th overall. It was a grueling course with many obstacles and challenges. I was behind the wheel and kept moving forward and it paid off. I could not be happier. The Sparta team that beat us ran a great race and we did our best to catch them. We had to change a flat and a front axle, which took a little time. But all in all we had a pretty perfect race.”

Hudson had to overcome her nerves during the race.

“I am absolutely ready,” she said an hour before the race. “I got really good sleep. My butterflies are at a 10 on a scale of one to 10 but I am really excited to start and get going.”

The 550-mile long race snaked its way up from Beatty to Dayton. Racers started at 5:45 a.m., with the last racers coming in just before dawn on Saturday.

Hudson has a lot of experience in off-road racing.

“I have been racing since 2009 and race for Getting Dirty for the Ta Tas Racing,” Hudson said. “I wanted to raise money for breast cancer and to date this year I have raised $40,000 to help ladies who can’t afford the treatment.”

The female racer currently drives a UTV Polaris Razor in the Unlimited Class.

Hudson says only five women total raced in the Vegas to Reno race.

Hudson’s success is shared by her family.

She has an uncle, John Bancleave, who works on her pit team. He helped to teach her to drive at 12.

“I let her drive my van that she learned to drive on the highway at 12,” he said. “So her off-road driving is very good. She was raised driving. We all support her, including her grandmother.”

Her husband, Rich Hudson, does a lot of mechanical work on her UTV.

“One of my co-drivers is my husband, who will be racing with me too,” she said. “I have been in the top 10 in my class. I have placed in the top three in most of the races. I have raced with one of the top racers, Lacrecia Beurrier, who helped me get started in this class. I rode with her in a couple of races.”

She said she met her husband, Rich Hudson, through racing.

“I built the car for her, I coach and support her and will ride with her,” he said. “She has talent and we are a good team. We work well together.”

The UTV Hudson drives is a non-turbo, which her husband likes.

“We are a non-turbo motor so we are not taxing everything like the turbo motors do. In our class, we race against turbos and non-turbos. We have good horsepower, and what we lack in speed we make up for in suspension and driving. I like the durability of the motor, there are less moving parts. And it is less demanding on the drive train.”

She had a message for women who want to get into off-road racing, “Go for it, and always get good sponsors. Don’t be afraid.”