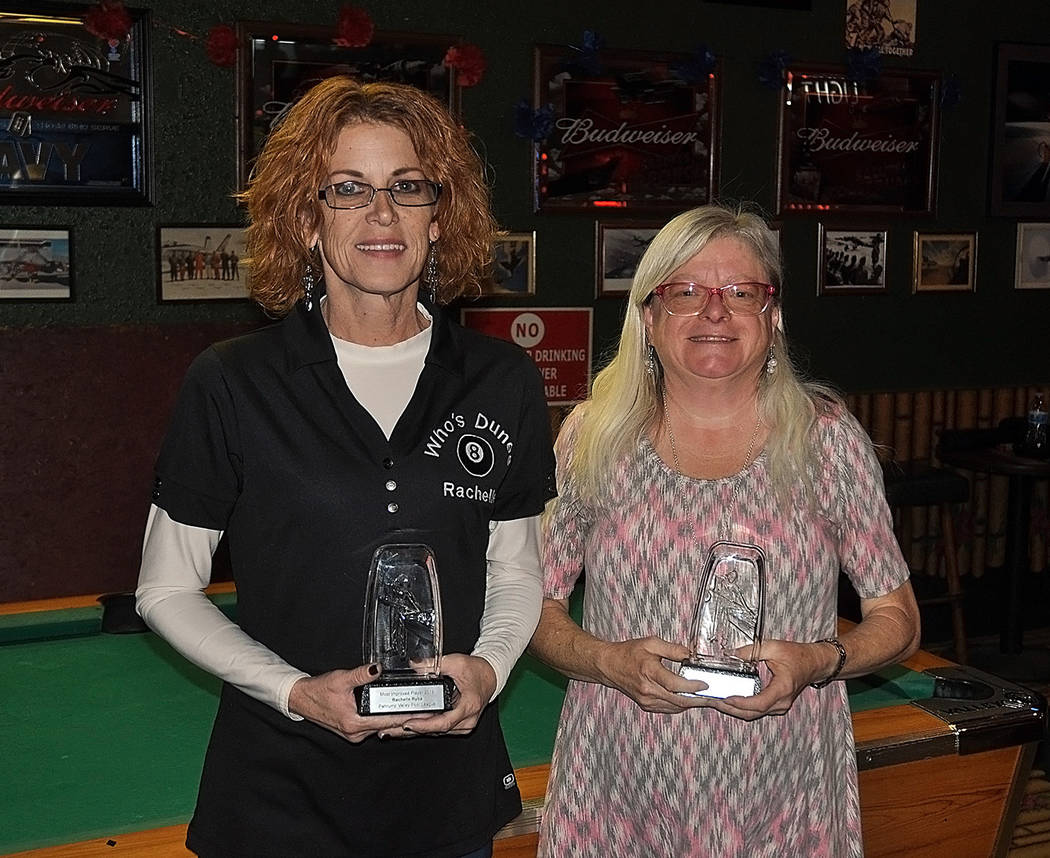 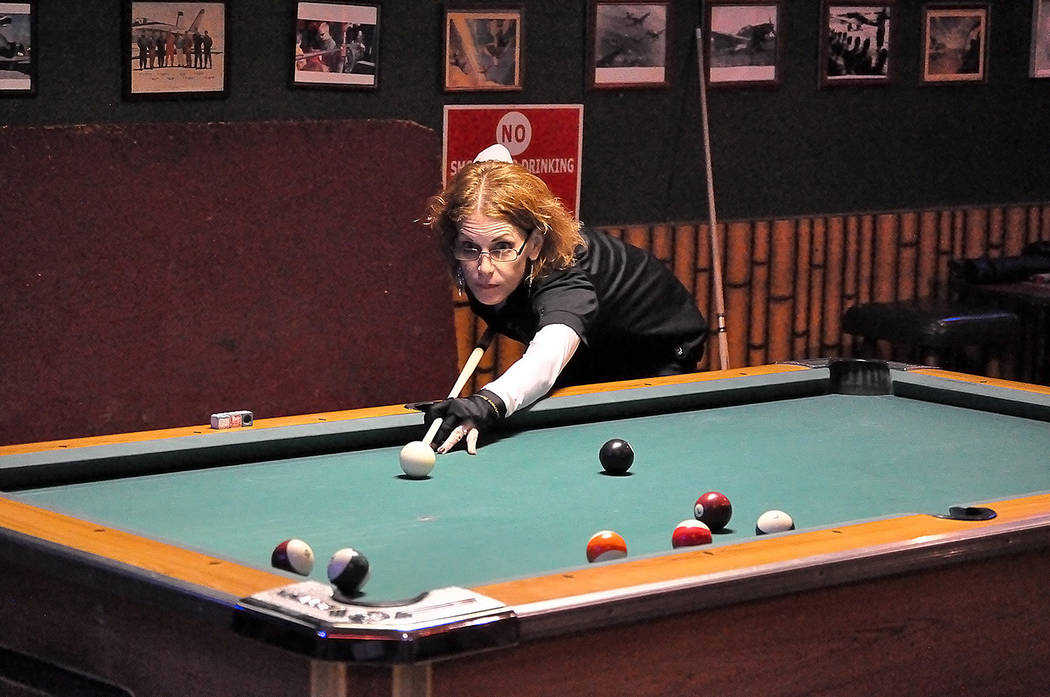 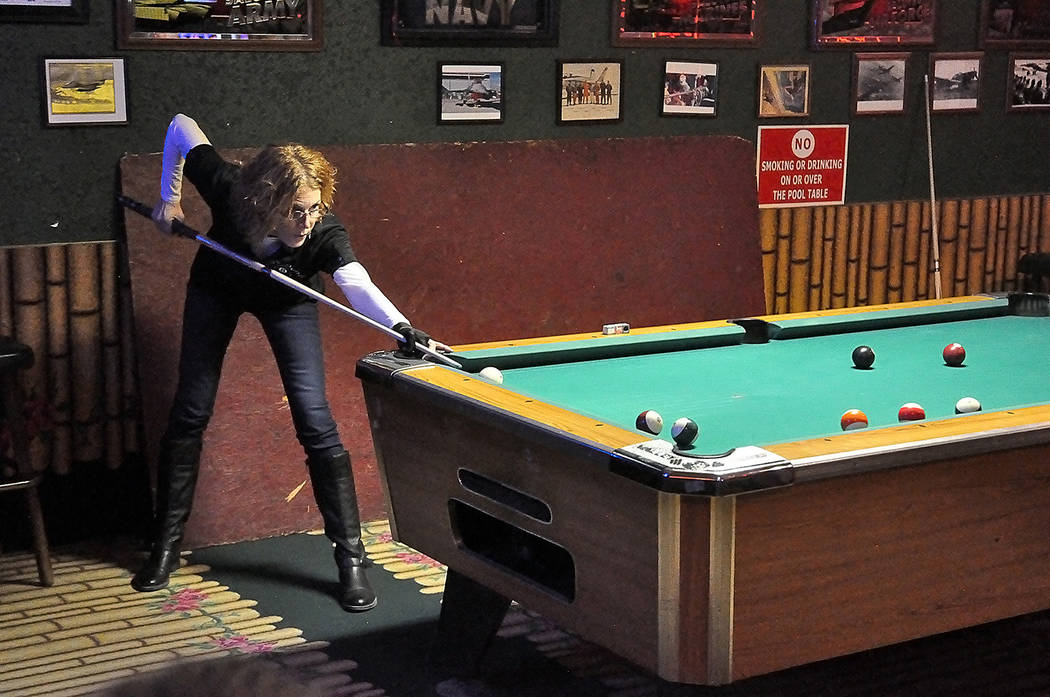 Horace Langford Jr./Pahrump Valley Times Rachelle Ryba of the Who's Dunes 1 team during a Pahrump Valley Pool League game against The Hideaway on Jan. 15 in Pahrump.

For people old enough to remember, the peak visibility for pool in the United States was a battle between Willie Mosconi and Minnesota Fats on Valentine’s Day of 1978 at the Waldorf Astoria Hotel in New York.

“ABC’s Wide World of Sports” was there, complete with Howard Cosell, and 20 million people tuned in to watch the champ (Mosconi) and the hustler (Fats) duke it out.

You can almost see the cigarette smoke just thinking about it. They probably called women “broads.”

Here in the non-televised Pahrump Valley Pool League, the “broads” are closing the gap on the guys, as both of the players voted most improved during last year’s season were women.

Neither Rachelle Ryba nor Colleen Fedie is a lifelong pool player, but their significant others got them interested in the game and both now love playing.

The Pahrump Valley Pool League features 12 teams of five players, representing bars in town. Four teams represent The Hideaway, there are two each from Arnie’s, Coyote’s Den and Who’s Dunes and one apiece from Bounty Hunter and Wildside. Ryba and boyfriend Dok Hembree play for one of the Who’s Dunes teams, while Fedie and husband Terry play for one of The Hideaway’s teams.

“Years ago, I used to play when I was probably 19 in a pool league in Wisconsin,” Colleen Fedie said. “And I just quit playing until we moved out here five years ago.”

Fedie said they found Pahrump while doing online searches for a new home.

“We were looking for places that were low in crime, where there are jobs, where there’s no snow and low to no humidity,” she said. “Pahrump just kept coming up. I told my husband, I don’t know what Pahrump is, but I think we need to go there. We came here Labor Day weekend and ended up buying a house.”

The Fedies are semi-retired, and while Colleen picked up the game when they moved to Pahrump, husband Terry has been playing much longer.

“In 1985, we went to buy a foosball table, and I talked him into buying a pool table,” she said. “He’s been shooting ever since.”

Ryba is in her third year playing in the pool league.

“I never played pool before that,” she said. “Dok taught me how to play. Colleen’s husband is like Dok, a fantastic pool player.”

Their teams met on a chilly Wednesday evening in January at Who’s Dunes.

“This is our home bar,” Ryba said. “Every other week we travel to a different bar. I love this. It’s healthy competition. Everybody’s friends with everybody, but once you get out there you want to win.”

Friendly but competitive is the theme of the league, and both players say the games are simply a night out with competition added.

“I stay home most of the time,” Fedie said. “Six days out of the week I stay home. This is my one night out a week.

“It’s very relaxing, and that’s how we met a lot of these people. When we moved out here five years ago we didn’t know anybody. Both of our families are in Wisconsin.”

On her one night out on this particular week, Fedie’s team got the better of things, although Ryba’s sank the most balls. Each player on a team plays four of the players on the other team, and the total balls sunk in each round are counted. Total balls count as a fifth round.

There is a handicap in place, based on the rankings of the players. The numbers for each team are added up, and the difference gets added to the weaker team’s score in each round.

Ryba said that other teams noticed how she and Fedie improved during the season, which lasts from October through April.

“Every team we played would tell us girls each week, you girls are getting better,” Ryba said. “It made us feel good because we tried so hard.”

Fedie said one reason she became a better player was getting help from outside the family.

“When my husband tries to show me shots, he’s a much better shooter than I am,” she said. “Like much, much, much better. So he’s always showing me shots from his perspective, which I can’t do.

“There was another couple here, and her husband (Patrick Lee) was teaching me how to shoot pool. He has since passed away, but he taught me everything that I know. He was more patient, and when he would show me shots he would teach them and explain them to me and not expect me to do something fancy.”

The result for Ryba and Fedie was the most improved player award, and it was not lost on either of them that two women were honored.

“I was so impressed, especially because as I played Colleen I could see her getting better as I was getting better,” Ryba said. “Our matches were different. When she called both of our names, I was so happy. I was really proud of both of us. We deserved it.”

“It just means we play better than we did when we started,” Fedie said. “I am a 4. About the same this year, a little better.”

And they continue to get better.

“I’m learning bank shots, and I can actually do bank shots that the other people on the team can’t,” Fedie said. “I do a lot of bank shots.”

“I love cut shots,” she said. “Cue ball’s down here, there’s one ball up there by the rail. I’ve got to make it go in that corner pocket from right here. So I hit it on the very edge, and it goes in the side pocket. Most people will do a bank shot off a rail. I don’t do those. I do cut shots.”

Ryba said she sees more female players in the 8-ball league this year than when she started.

“I have noticed a few new girls that I had not seen before,” she said. “There are so many more that want to play, but this is a tough league. People on this team play in Vegas three times a week. This team we’re playing now is stacked.”

A tough opponent requires focus, and, despite the setting, Ryba said the readily available alcohol is not an issue.

“Most of us on our team don’t drink while we’re playing,” she said. “By my second game, if I’m not winning, then I’ll start having a drink. I figure it can’t be any worse.”