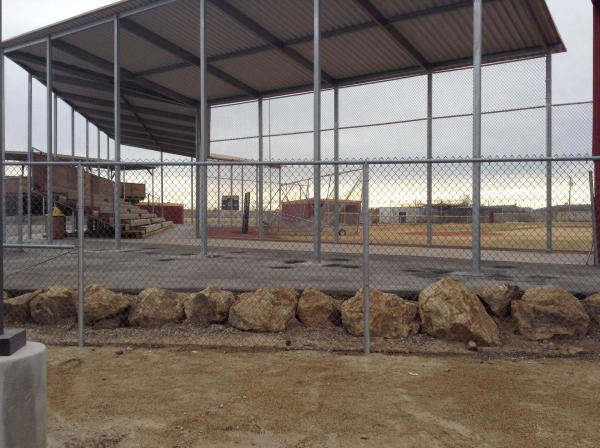 The Trojans baseball field got a facelift during the winter months.

In December the school district hired local contractors to complete a new shade area and backstop for the baseball field. The construction was finished in the second week of January. Maintenance and operations head for the Nye County School District Cameron McRae was satisfied with the job.

“Local contractors did a great job,” he said.

Trojans Athletic Director Ed Kirkwood said the field will be dedicated to former teacher Rod Poteete on March 19 at 3:30 p.m. The teacher taught from 1974 until his retirement in 2009.

He began teaching and coaching baseball at Pahrump Valley High School, where he stayed 35 years. Rod lived in Las Vegas and drove to Pahrump every day, snow or shine. His baseball teams won many league championships. His love of the game and of Pahrump was legendary. He could almost be called the “unofficial historian” of Pahrump Valley High School. He had donated many pictures and items to the Pahrump Museum and when Wulfy’s was opened, much of the memorabilia on the high school sports history there was his. Rod also was an avid sport card collector. At his passing he had collected a half a million cards. His many cards are the topic of many conversations. His love of sports also led him to be a sports official for high school basketball and slow pitch softball for many years. Poteete passed away from complications of cancer in July 2014.

Trojans baseball coach Brian Hayes can’t wait to get his team onto the field.

“The new backstop for the field looks great,” Hayes said. “The contractor who did the job is an old baseball alumni and also brought us in a load of dirt for the field. We are thankful for all the work and money the district has put into our field.”

Hayes was also excited about the dedication of the field.

“I didn’t know Coach Poteete personally, but I know that he has done a lot for PVHS baseball,” the coach said.

Rod Poteete’s widow, Jean, said she will be there for the dedication along with her sons.

“The boys and I are very excited for Rod,” Jean Poteete said. “It would have made him very happy. Pahrump was his second home and sometimes we thought it was his first. We will be there for the dedication in the spring.”

Cutline: The Trojans baseball field got a new look in January and will have a new name on March 19.