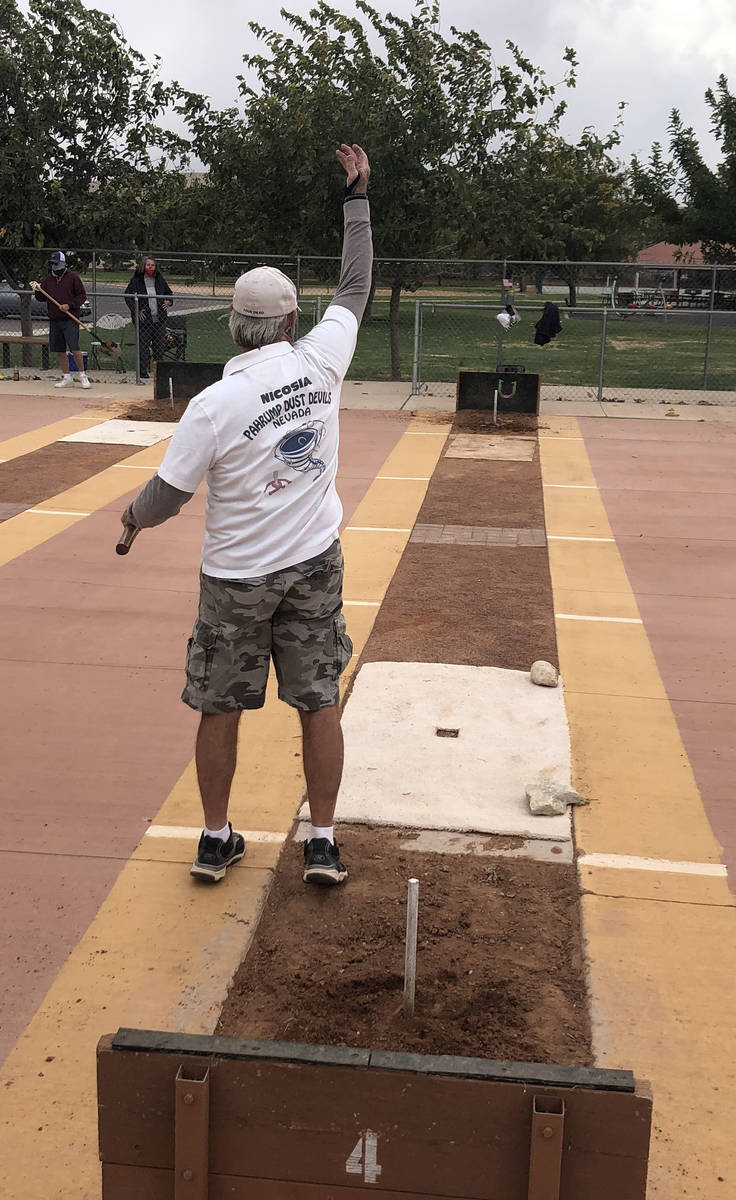 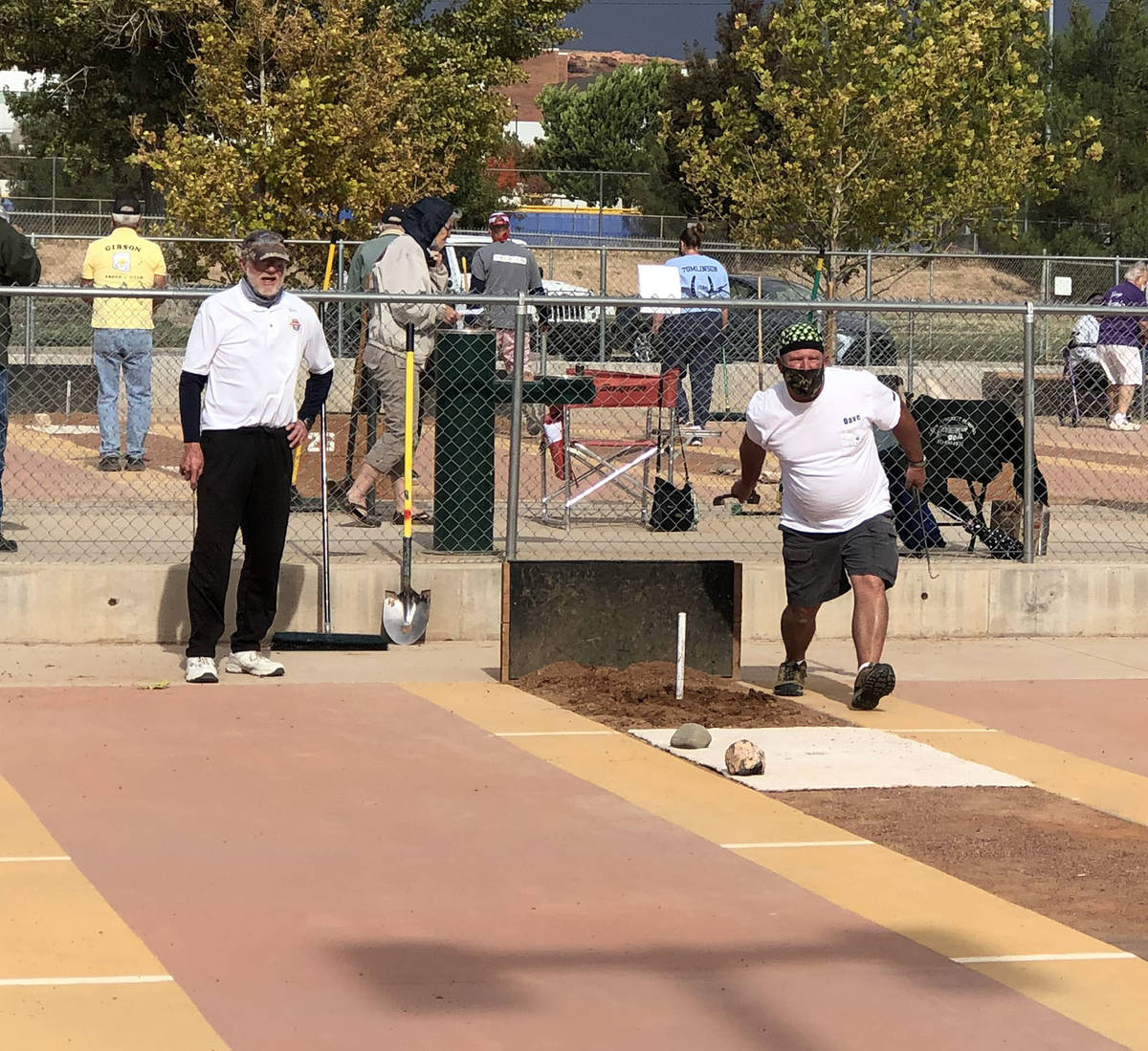 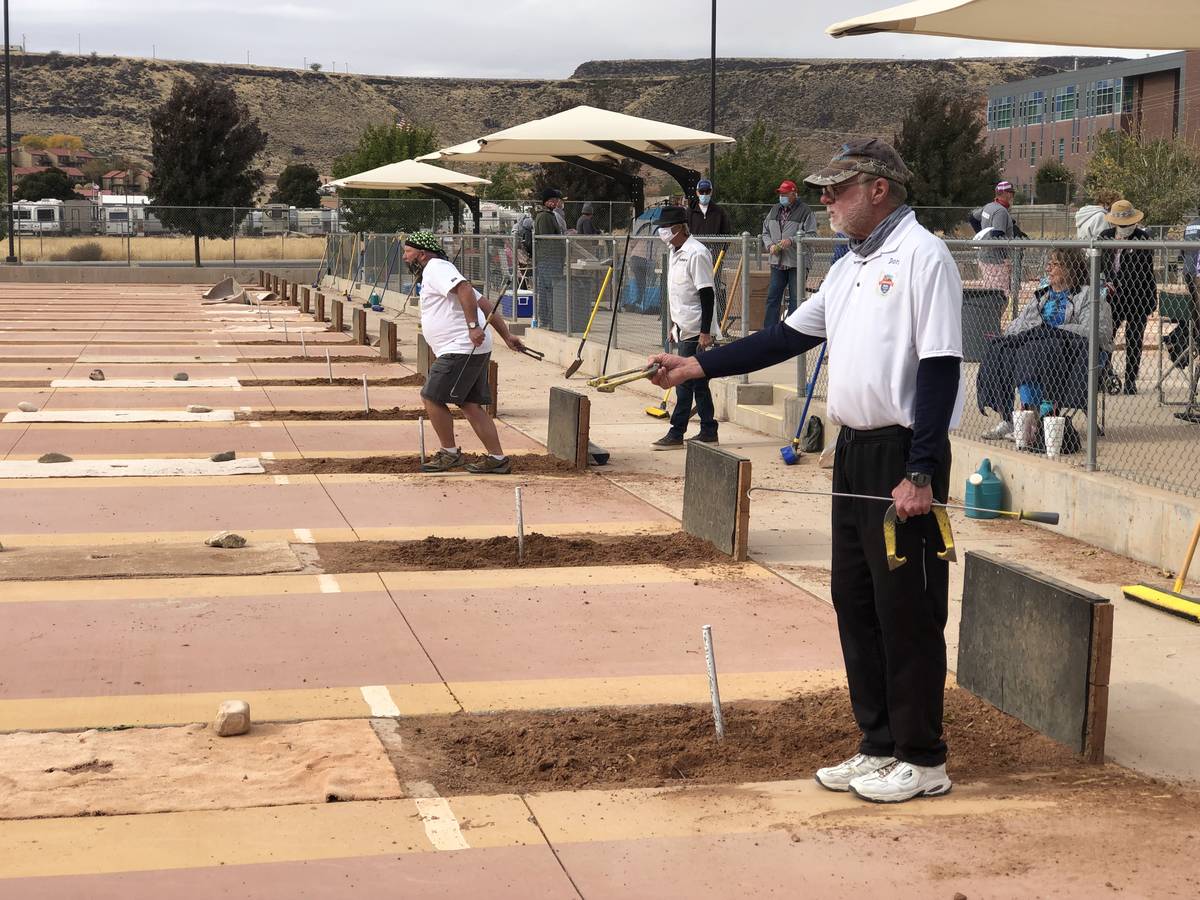 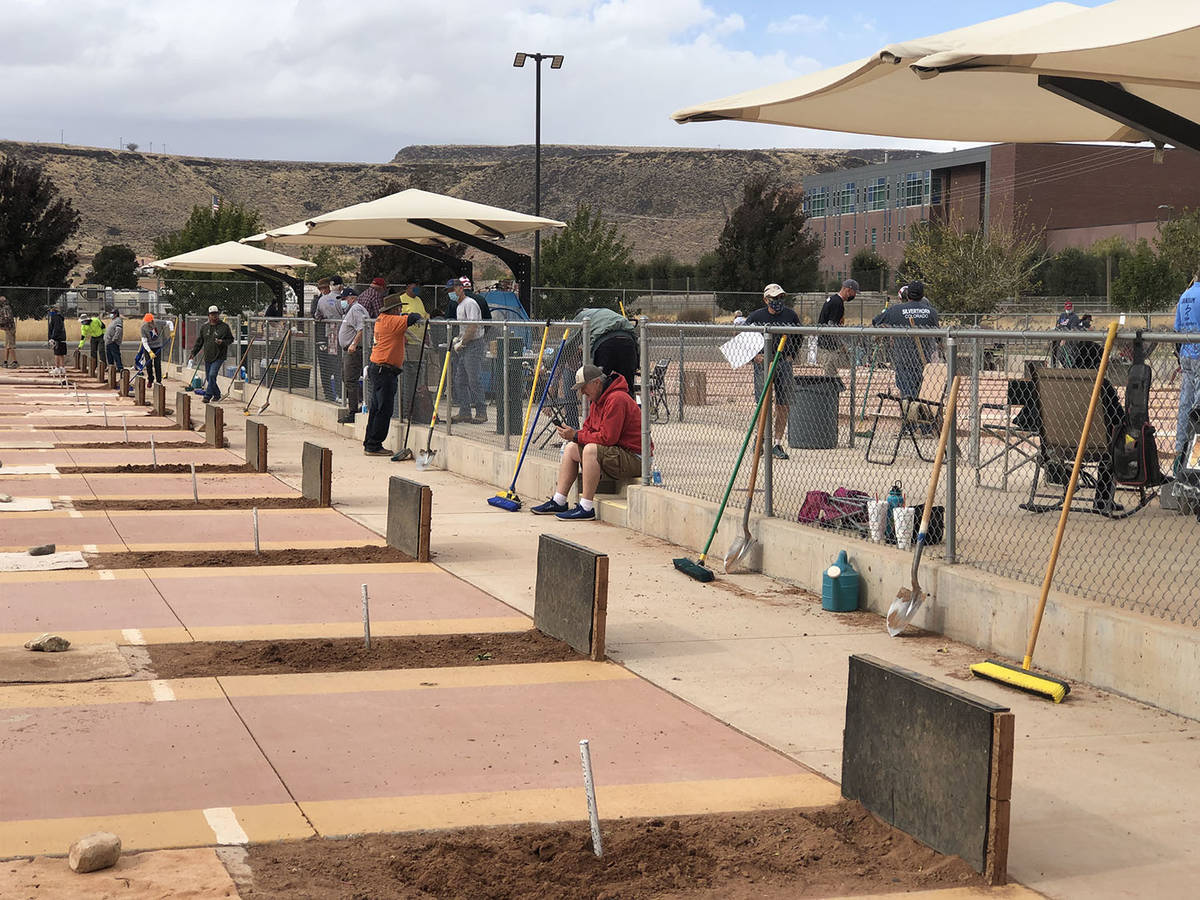 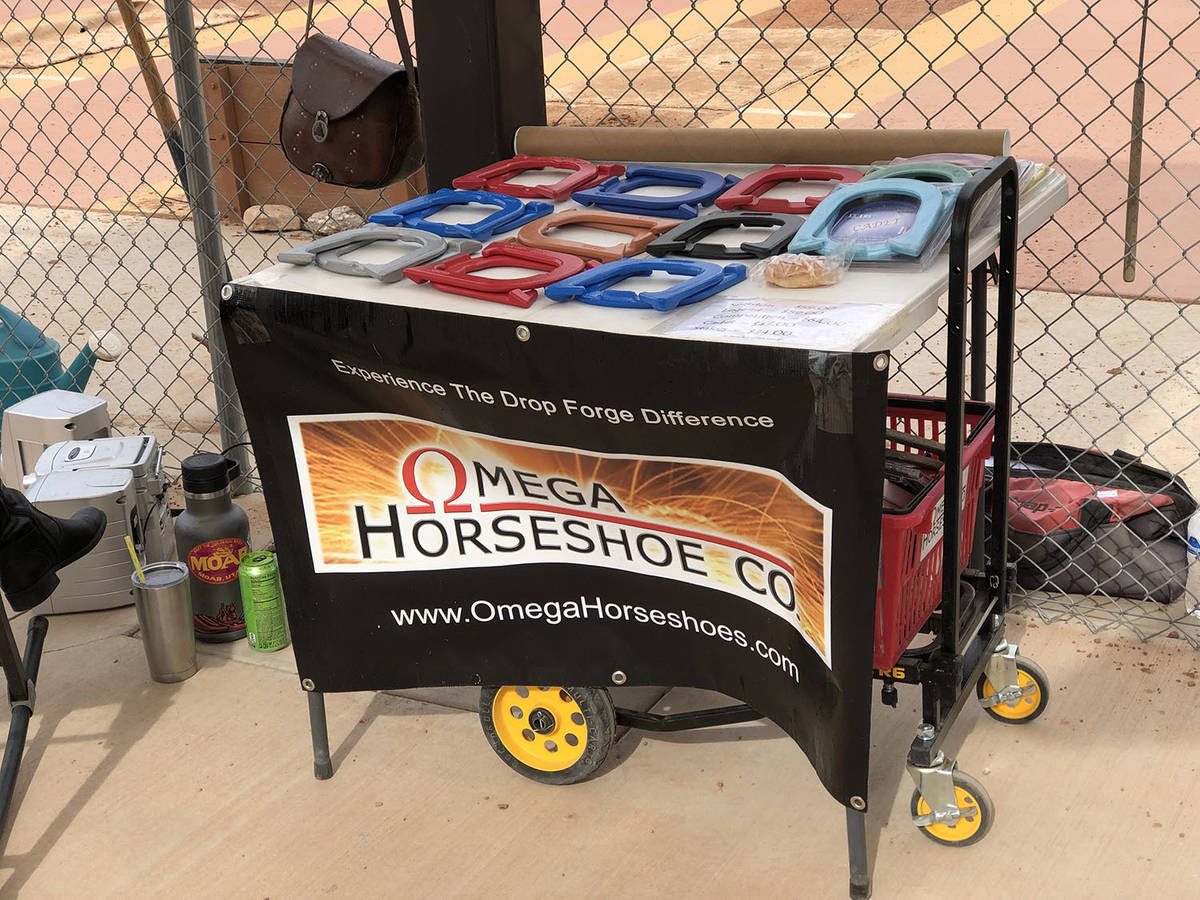 Tom Rysinski/Pahrump Valley Times A vendor displays items for sale Saturday at the Western Open in St. George, Utah. A variety of sponsors added $5,000 to the prize pool for the tournament, ensuring division winners of more than $500 in prize money.

Think of it this way. You could play golf at Mountain Falls, but if you have a chance to play at Augusta National, Bethpage Black or Pebble Beach, you get your butt on a plane and go. You know the competition will be great at any tournament held on one of those courses.

It’s kind of the same thing with the Western Open. More than 70 pitchers from 11 states — including Illinois, South Dakota and Kansas — converged on the southwest corner of Utah for one of the largest annual events in horseshoes.

“It’s kind of like that baseball movie with Kevin Costner, ‘For the Love of the Game,’ ” said Don Brown, a previous president of the Nevada State Horseshoe Pitchers Association, referring to that other baseball movie with Kevin Costner. “It’s a healthy sport, it’s a fun sport, you meet a lot of people and St. George has a beautiful venue, which I wish we could get in Pahrump.”

The courts in St. George are a well-maintained complex of 30 horseshoe pits. The Southern Utah chapter of the National Horseshoe Pitching Association is one of the more vibrant in the country, according to former chapter President Seth Ohms.

“We have quite a following, and almost 100 youth play with us, so a lot of kids play,” said Ohms, who said there are about 30 horseshoes tournaments each year in Southern Utah. “This is the biggest one, and every other year we host the state championship, and that’s almost this size.”

Ohms became part of the horseshoes scene the same way many other people do – his father was very into it. Dennis Ohms was the president of the NHPA Southern Utah chapter for decades and is in the NHPA Hall of Fame.

“My father did it for 40 years,” Seth Ohms said. “He was the one who started the organization, and they kept re-electing him. When he passed away suddenly, I was the only guy who knew what he was doing. I said I won’t be the guy for 40 years, but I’ll teach you guys how to do it right.”

It appears he did, and the event just keeps growing.

The Kansan is Roger Vogel, who went in with a 70.30 ringer percentage. He couldn’t match that this time, going 7-1 and finishing second to Utah’s Benj Rains, who nailed ringers on 67.0% of his pitches to 58.25% for Vogel and beat Vogel 38-32 in the final game in Class A to finish undefeated and claim the championship.

Horseshoes is one of those sports that is far more fun to play than to watch. You’re not going to get marching bands, cheerleaders and screaming fans at a horseshoes tournament, unless a runaway shoe nails somebody. (It happens.)

“I equate it to watching grass grow,” Brown said. “As a spectator, it’s hard to pay attention and see what’s going on, and even the world-class players can get a little bored sometimes. But we enjoy the game, and that’s why we do it; for what little we spend, we have a great time.”

That’s not to say there can’t be excitement, but an observer won’t always realize it. A game deciding a division title can happen with few, if any, other pitchers knowing it.

That happened to Lathan Dilger, the current NSHPA president, in his final game in St. George.

“He was up by three points on the last throw,” Dilger said of his game against Gordon Warren of Utah. “He had one in there close, but not a ringer, and then I threw a double ringer and beat him by three. That forced a playoff because he only had one loss in eight games, and I was his ninth game. Now him and another guy are going to have a playoff, and the other guy (Lane Durrans of Wyoming) was sitting there watching the whole thing, rooting for me.”

Perhaps not the same thing as a Red Sox fan rooting for whoever is playing the Yankees, but it’s the same idea. And don’t think it doesn’t matter.

“This year they got a ton of good sponsors,” Dilger said of the tournament organizers. “They got $5,000 in extra money people are going to win. The first-place guys are going to get well over $500.”

Not bad for a $60 entry fee that included two days of competition — nine or 10 games, depending on the division — and an awards dinner at the Black Bear Diner. But even a good diner meal wouldn’t ordinarily require a three-hour drive.

“There are 70 players here,” said Randy Salzwimmer, competing for the third time in St. George. “Our tournaments are maybe 20, 25. We’ve got 11 states represented in this tournament. Plus we always like getting away. We like trips, and a two-day tournament is always nice.”

Just ask Nicosia, who turned the Western Open into a five-day getaway.

Like many pitchers in similar tournaments, Nicosia did better one day than he did on the other.

“I was undefeated yesterday, went 5-0, and I was on,” said Nicosia, who said he was competing in the Western Open for the eighth consecutive year. “I had a great day. But today’s another day, and I’m struggling. The wind’s tough; it’s a little chilly. (The shoe) goes through the wind, but it gets in your head.”

But while Nicosia’s points totals dropped from Friday to Saturday, so did his opponents’ totals, and he finished 8-1 to claim the Class E championship. In second place was another Pahrump pitcher, Mark Kaczmarek, who went 7-2 in a group that had a heavy Pahrump flavor, including Salzwimmer (3-6, 7th), Dave Barefield (3-6, 8th) and Brown (2-7, 9th).

Brown, too, has been competing in St. George for the past eight years, missing one year because of a nephew’s wedding.

“When we first started coming up it was 2012, maybe 2013, and they had a different venue then,” said Brown, whose father was born in nearby Hurricane, Utah. “At the time my uncle was still pitching — he’s still alive, he’s 93, but he can’t pitch any more — and that’s how I learned to do the game, going to family reunions, through my uncles, my cousins. I just tagged along.”

Getting family members involved has proved to be a good way to grow the sport. Recent horseshoes tournaments around Pahrump have included several competitors named Dilger, and Dilger’s son, Kasey, outperformed his father at last year’s Western Open, finishing second in Class E with a 7-3 record while the elder Dilger managed just a 2-7 mark.

This time around, Lathan Dilger moved up to Class C and went 4-5, splitting two games against fellow Nevadans.

There were no Nevadans in Class A this year, and Pahrump’s Dennis Andersen was the only one in Class B, and he went 6-3, slightly exceeding his entering percentage.

“I’ve won here before, three or four times,” said Andersen, who won Class C in 2019. “I won all four today, but yesterday I lost three and won two. The one I should have had I had 10 doubles and still lost. It’s very unusual to get 10 doubles. Last year I had seven and won, this year I had 10 and lost.”

Results aside, a horseshoes tournament is an organized party, and pitchers don’t want to miss any of the big ones.

“Horseshoes is just camaraderie,” Lathan Dilger said. “It’s just a close relationship with everybody. You come here one year, and next thing you know everybody wants to come. I dragged a bunch of people from Nevada this year, and I’m hoping this will work to our advantage and they’ll come up to our tournaments.”