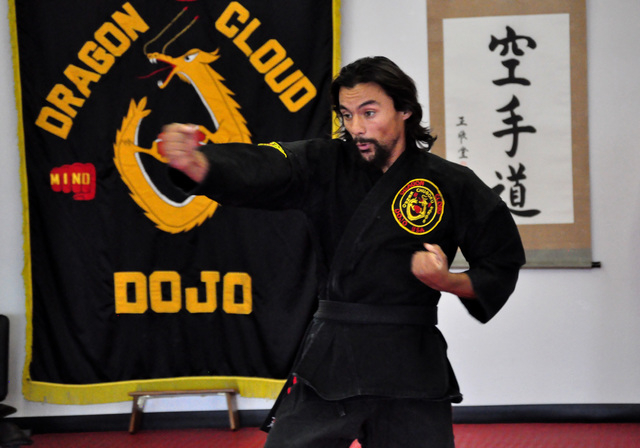 Pahrump’s mixed martial arts fighter Andrew Gonzalez will finally get his day in the ring on June 27 after over a month delay.

Gonzalez said the long delay has not hurt him in the least bit.

“It has given me more time to train,” he said. “I just did a lot of cardio and worked on my endurance. The extra cardio has given me more gas for the end of the fight. Even exhausted I am confident that I can throw a good punch or kick. I am very confident now I will have enough gas at the end.”

Gonzalez, (0-1) at 135 pounds, 5 foot, 7 inches, was to fight on May 15 in a Tuff-N-Uff bout at Cannery Hotel and Casino in North Las Vegas but at the weigh-in the opponent failed to show without an explanation.

The newest amateur MMA fighter in Pahrump works a day job with the Nye County Coalition, where he teaches life skills. He has earned a first-degree black belt in karate at Dragon Cloud Dojo and has been fighting for a year. When he is not working he is training close to five days a week.

His cardio workouts include using an elevation mask to give his breathing resistance, jogging three miles daily, and swimming.

“Pool workouts give you a lot of cardio and work out every muscle in the body,” he said. “In the long months up to this fight, I have had to learn to focus on my task at hand.”

This means when he is at work he doesn’t think about the fight and only work and when he trains he is only thinking about the task at hand.

“When I focus on reflex training, I only focus on that,” Gonzalez said. “I am able to zero things out. My hearing loss also helps me and allows me to focus better.”

Gonzalez uses a hearing aid and only hears about 10 percent of what people are saying without it.

“In the gym I worked on my hand techniques, my jiu jitsu and different strike combinations,” Gonzalez said. “This fighter is very similar to Tano in that it was hard to determine if he was a stand-up fighter or a ground fighter. He is beefy so I think he likes to take it to the ground.”

Gonzalez said he wants to also test the waters on his kicks.

“I want to be able to use my kicks,” he said. “I think they have a lot of power. I talked to my last opponent and he told me that my kicks almost took him out and that’s why he took me to the ground.”

According to MMA Coach Robert Wilson of Mix It Up Academy in Pahrump, who teaches Gonzalez jiu jitsu, kicking can be good but it’s also the fastest way to lose a fight if your opponent catches your kick and sends you to the ground.

“I don’t think that will happen to me,” Gonzalez said. “I am fast and confident in my kicks. If they are fast enough to catch them they tend to not be strong enough to take them.”

Gonzalez said the match will be a true test to see if all his training has given him the endurance and the ability to take a hit.

“In open tournaments before I was a black belt I always got mismatched and ended up fighting bigger guys,” he said. “They have hit me and I have been knocked around pretty good.”

His karate sensei, or instructor, and coach, Master Karate Instructor Jose Hernandez of Dragon Cloud Dojo, has said he has whacked his student pretty good and knows he can take a solid hit.

Hernandez said he was probably more disappointed than Gonzalez that the Tano fight was canceled.

“We wanted to get that done with,” he said. “But this upcoming fight will give him more exposure and is a better venue. This fighter has a win and he should be a tough guy to beat.”

Hernandez said he wanted his fighter to fight better fighters.

Gonzalez’s coach said it has been tough to keep his fighter focused and mentally prepared.

“Fighting is polishing the spirit,” Hernandez said. “I had my fighter training not only on his punches and kicks but I also had him do weapons training too. This was all part of getting his mind right and mentally focused.”

Hernandez said the spirit is more important than just telling your fighter he is “doing good.”

“I don’t want to pump up my guy and get him overly excited,” he said. “That’s not my way or my philosophy. I want him to be strong in spirit and to focus not on winning, but in not losing. I want my fighter to believe that what he believes in is much better than what his opponent believes in.”

When asked if his fighter was ready, he replied, “I think he is ready but I really can’t answer that. Only he can answer that.”

Gonzalez said, “If I lose, I still win because I get more experience.”

According to a Tuff-N-Uff press release, Gonzalez will be on a card with over 20 amateur fighters and at least six championship bouts. The fight will be at the Thomas and Mack with fights starting at 6 p.m. and will honor founder of Tuff-N-Uff Barry Meyer.

The annual “Pack the Mack” free fight card event is set to benefit the American Foundation for Suicide Prevention. Meyer committed suicide from depression in 2013. Tickets can be printed online at the Tuff-N-Uff website: http://www.tuffnuff.com/.