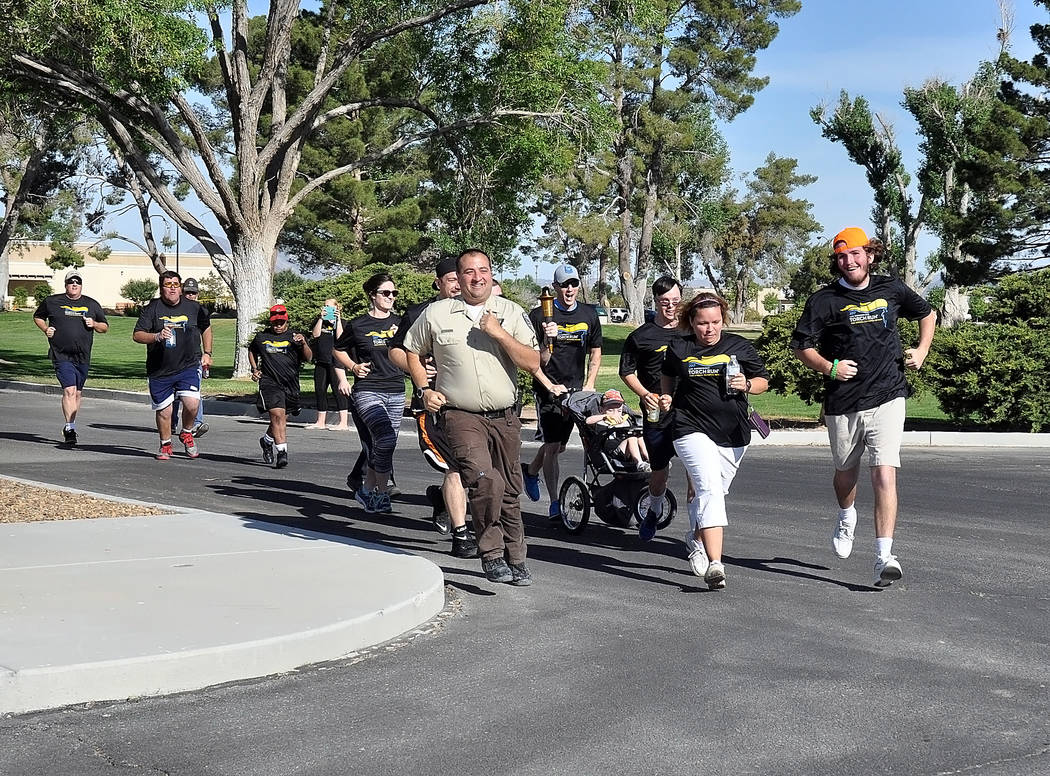 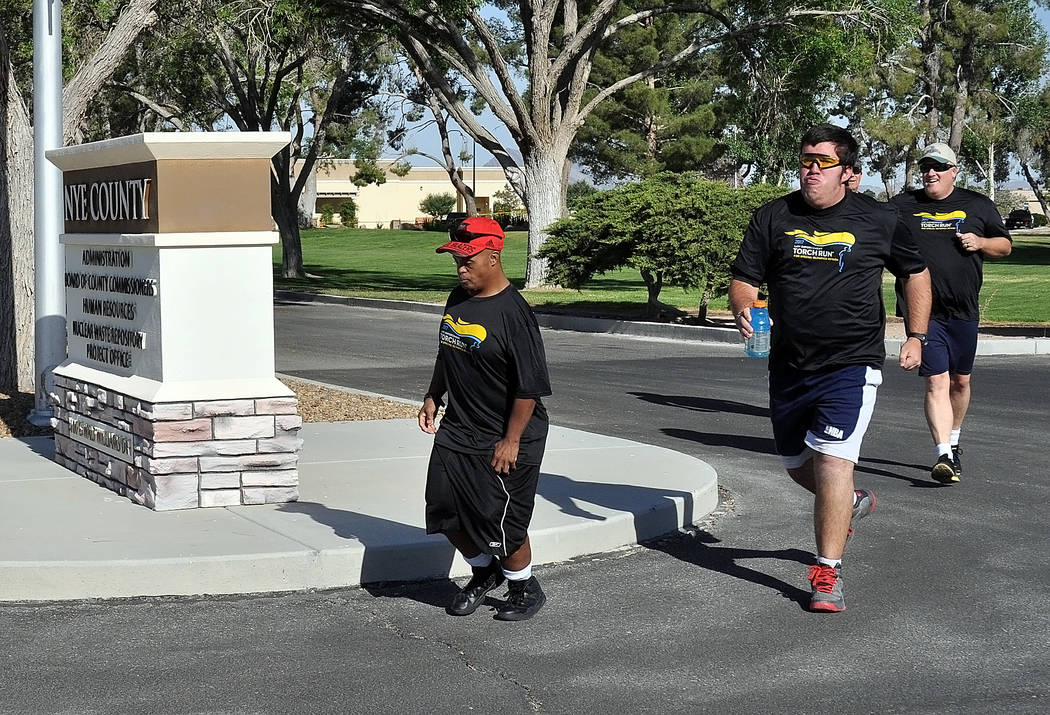 Horace Langford Jr./Pahrump Valley Times A personal best for Michael Turrin as he sets out with a strong pace (red hat) and finished the event for the first time without stopping. 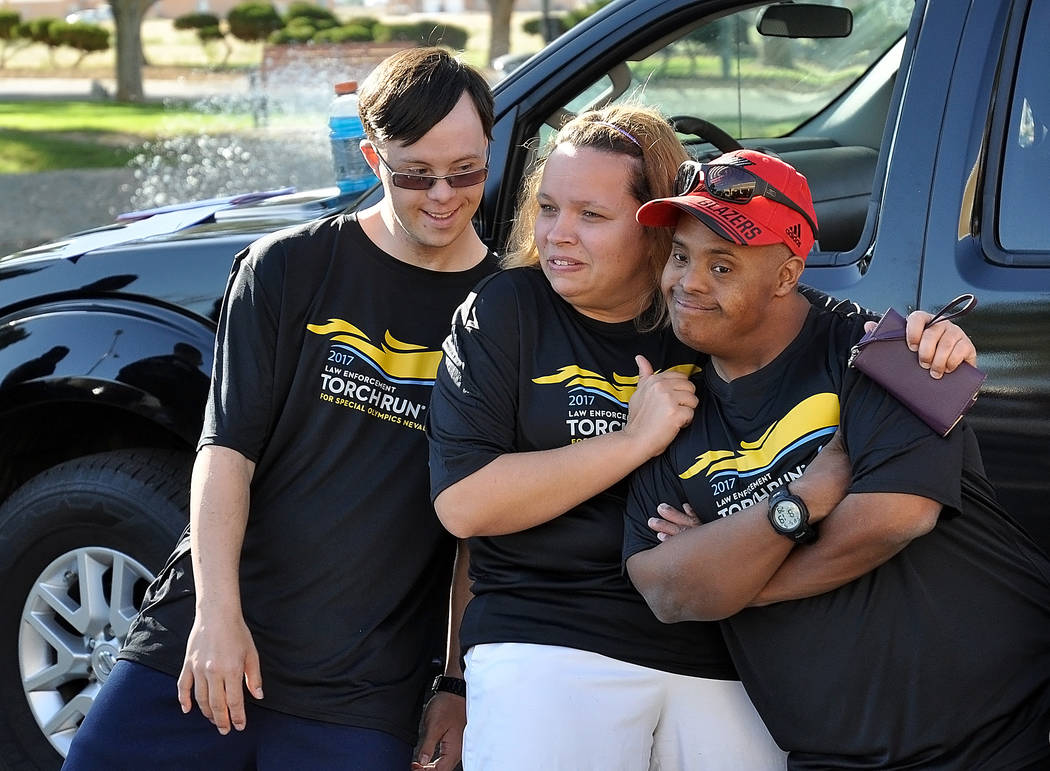 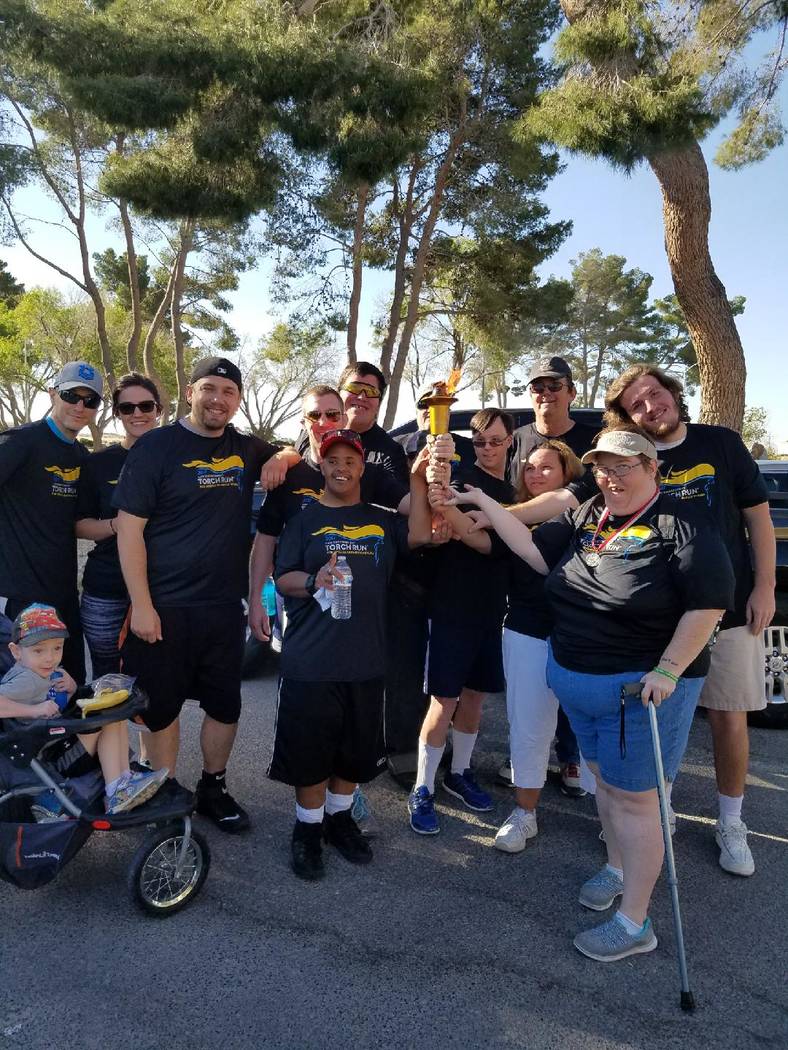 He had never finished the Law Enforcement Special Olympics Torch Run before, which was on May 5, but he was excited to run it anyway.

“I am really excited because my family is watching me run,” said Michael Turrin, a Special Olympian,said. Perhaps his excitement was what carried him during the three-mile event, for Turrin finished the run for the first time.

The torch run is an annual event that is a major fundraiser for Special Olympics.

In Nevada, Special Olympics athletes and their law enforcement counterparts carry the torch, the Flame of Hope, throughout the state, ending in Reno for the Reno Special Olympic games. Michael Turrin’s mother said he loves being a part of this. Although it is a fundraiser, the torch run is much more than that to Michael.

“He didn’t stop and he is proud of himself and he is happy,” Martha Turrin said.

Turrin has Down syndrome and his mother said he always had to stop before, but Michael Turrin has been a fighter all his life and he was going to make it this time.

A social worker said Michael Turrin would never walk, when he was a baby.

His mother said her son overcame that and has had to fight off being overweight recently. He suffered from being overweight the first two times he participated in the torch run and this time he was determined to walk the whole thing.

“Special Olympics has helped him lose weight,” she said. “He does all the sports (bocce, softball, golf, soccer and swimming, to name a few) and on Friday he walked the whole three-mile run without even stopping.”

Michael is not quitting, even at 46 years old. His mother said Special Olympics is still a big part of his life.

Other athletes have overcome similar challenges. All the athletes who participated in the run had day jobs and had to take off from work.

Billy Klem, a Special Olympics athlete, does cross training just so he can compete.

“He was very excited,” Teresa Klem, Billy’s mother said. “When we were coming here he clapped his hands. “

He had to take a break from his cross-training class to participate in the torch run, she said. “He had to make a decision. He does CrossFit to keep fit. Last year, he sat out a bit. Now he is ready to run.”

Ashlin Johnson, a Special Olympics athlete, has had some leg issues but took off from work to be there. She is 33.

“I love doing the torch run every year,” Johnson said. “I have run this three times. I like running long distances sometimes. It depends on my legs. I love Special Olympics.”

The law enforcement community, the Nye County Sheriff’s Office, came out in force to help with the event. They provided cars for traffic and four officers and a sergeant to hold the Flame of Hope.

“The rule is when the torch is lit, that an officer must have his hand on the torch if an athlete wants to help carry the torch,” Allyce Pierson, associate director for the Law Enforcement Torch Run Special Olympics Nevada said.

“This is our third year participating in this,” Sgt. David Boruchowitz, sheriff’s office spokesman said. “Sheriff Wehrly feels strongly about supporting the community and Special Olympics is a great organization. Our officers are spread thin working, so it’s heartwarming to see them take their day off to come in and do a charitable event. We want to see Special Olympics flourish.”

Boruchowitz said because he has a special needs son this event is personal to him.

“I think when you have something that is personal to you is when you realize the effect it has on other people,” he said. “I think as the supervisor it imparts to other deputies how important it is and how much value it has.”

This event also brings Special Olympics together in Pahrump and throughout the state.

“We do the torch run in preparation for the Reno games in June,” Pahrump Special Olympics coach Tony Pickthall said. “They love doing it every year and it’s another opportunity for the camaraderie and everything. It really helps get them excited for the Reno games. They have been talking about it since day one of practice. We have regionals on May 13 and this gets them ramped up for it.”

Then there is the fundraising importance of this event.

Pierson said this event is a major fundraiser for Special Olympics Nevada.