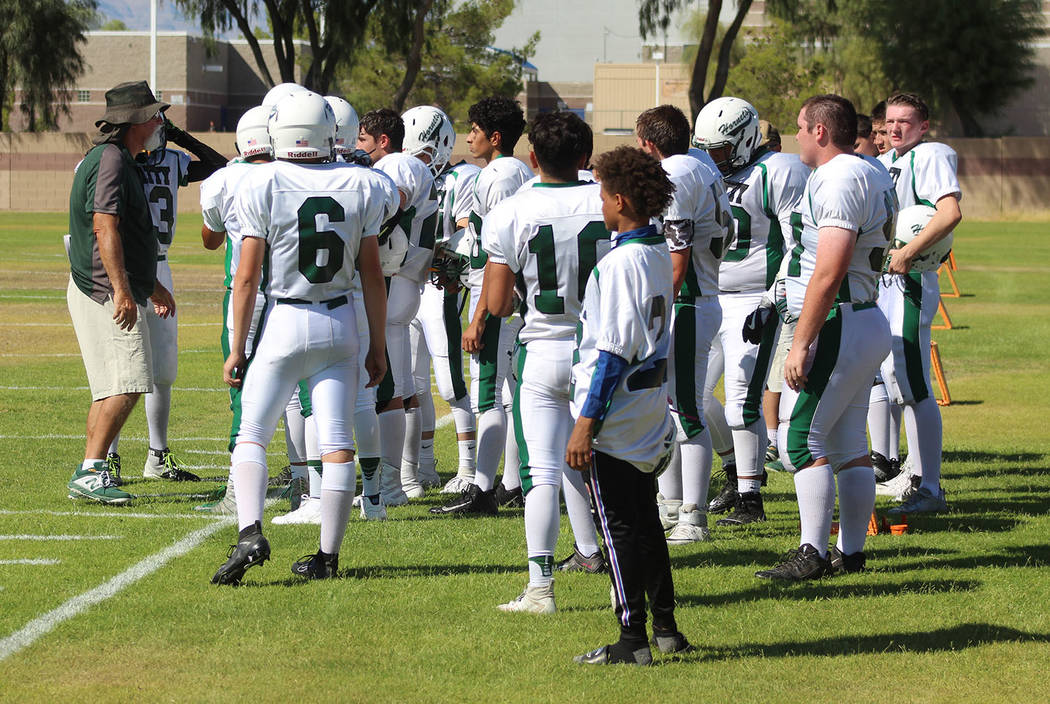 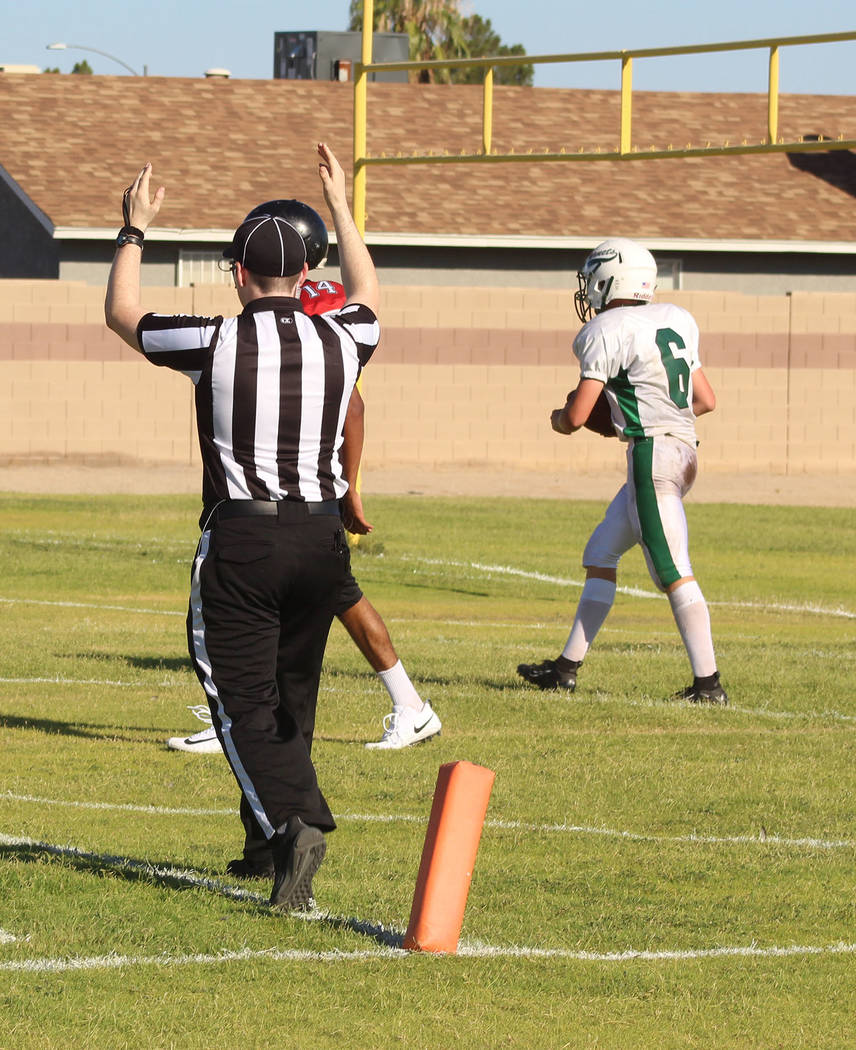 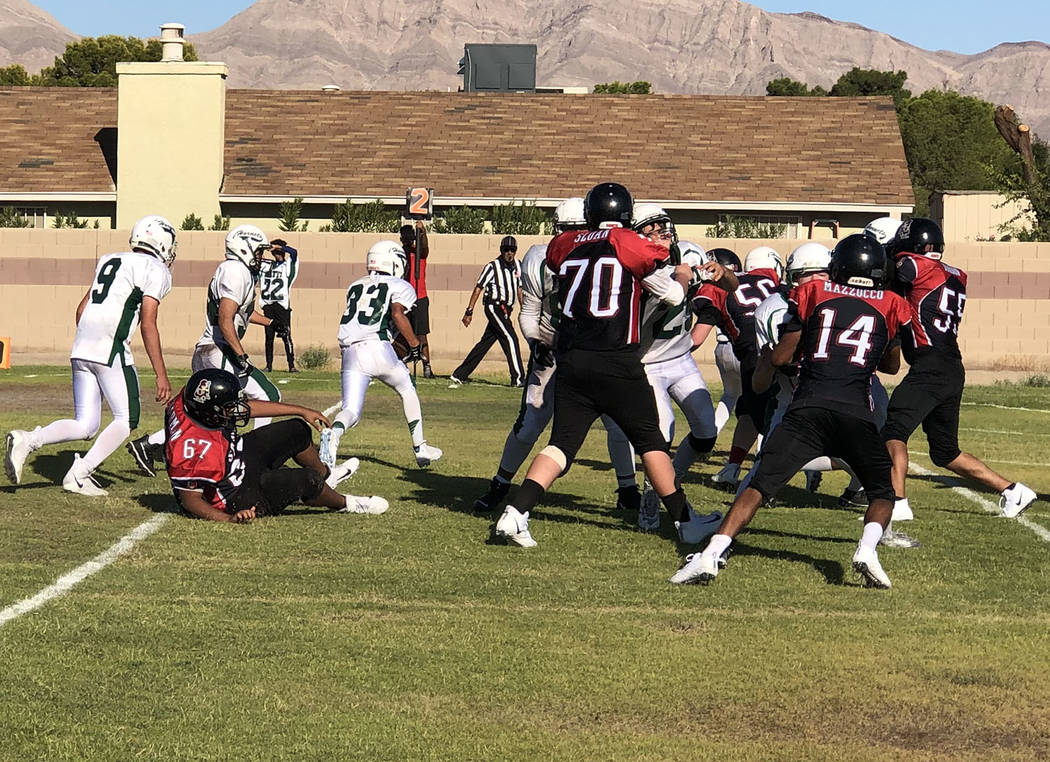 Tom Rysinski/Pahrump Valley Times Beatty's Ethan Mendoze (33) finds room for a 4-yard run during the second half of the Hornets' 52-0 win Friday at Mountain View Christian. Beatty rushed for 242 yards while holding the Saints to 5 yards on the ground,

With his football team’s opener canceled because of Round Mountain’s roster issues, Beatty High School senior Fabian Perez took advantage of the night off, opting to scout Mountain View Christian a week before the Hornets were scheduled to play the Saints.

“Last week, I went to Indian Springs to watch them play, and they were playing pretty good,” said Perez, who saw the Saints lose 36-22 to the host Thunderbirds.

As it turned out, Perez didn’t really need to make that trip.

The Hornets pushed the Saints all over the field Friday afternoon, as Brayden Lynn rushed for 107 yards and three touchdowns and Perez added 85 yards and two scores as Beatty cruised to a 52-0 win in Las Vegas.

“I thought it would be closer,” Perez admitted, but Beatty coach Leo Verzilli knew the afternoon sun would be a far tougher opponent than the Saints.

“We got some film on them early,” Verzilli said. “We had an idea. It was hot, we had some cramping going on, and some were just flat-out tired. We’ve gone over that scenario so we had subs in the right spots going in and giving them some breathers. It was a good day to get the rotations going and get some subs in there.”

Indeed it was, as the Hornets set the tone for the game immediately. Beatty took over on the Mountain View 27 after a poor punt and just let Lynn run the ball right down their throats, needing just three plays to find the end zone. Perez eluded would-be tacklers for the 2-point conversion, and you could have turned your sets off there.

“It’s kind of our bread and butter,” Verzilli said of the opening drive. “We work a lot with our line to be one giant unit and be able to enforce our will on their down linemen, and hopefully discourage them a little bit.”

The Hornets followed another Mountain View three-and-out with a routine six-play, 40-yard drive, with Lynn scoring from 3 yards out and hitting Ryan Poynter for the conversion to make it 16-0.

The Hornets doubled the lead by halftime, with Perez scoring on runs of 11 and 13 yards.

Meanwhile, the Saints didn’t get their initial first down until their fifth possession, when they put together a respectable drive which took them from their own 17 to the Beatty 20. But Juan Lopez sacked Saints quarterback Alex Davis for an 8-yard loss, then the Hornets stuffed a fourth-down run and blocked a punt.

Even when they got a break, the Saints did nothing. A fumble on the second-half kickoff put them in business at the Beatty 23, but after a 10-yard pass, they started going backward. A 2-yard loss on second down was followed by a snap Davis was not prepared for and fell on for a 7-yard loss, then on fourth-down, a high snap had Davis in trouble, and he was finally chased down by Ethan Mendoza for an embarrassing 15-yard loss.

Six plays and 43 yards later, the Hornets were back in the end zone with Lynn getting his third touchdown of the game, which mercifully brought on the running clock with the score 40-0.

The total dominance by the Hornets in the trenches wasn’t based on a size advantage; in fact, the Saints were bigger up front than they were.

“They had a nice big line,” Verzilli said. “They looked really big, but they didn’t play big.”

“They don’t use their bodies,” Perez agreed. “You have to use your body.”

Another turnover led to a two-play, 7-yard scoring “drive” with freshman quarterback Francisco Granados at the controls. Three yards from Granados and 4 yards from Mendoza made it 46-0. A blocked punt led to a three-play, 15-yard drive, with Granados needing three carries to get the Hornets in the end zone one final time in the closing minute. The clock died with about 50 seconds left, and Beatty took a knee on the conversion on the game’s final play.

The Hornets held a 242-43 advantage in total offense, with the Saints losing 34 yards on six sacks and seeing 10 other plays result in negative yardage to finish with 5 yards rushing. Beatty had 16 first downs to four for Mountain View, three of which came on one drive. But all of that didn’t mean everything went smoothly for the Hornets.

“We can take a lot of mistakes from this,” Verzilli said. “It’s going to be an ugly Monday film day. They’re not big problems. It’s stuff that we can fix, go over it again with those guys. Some bad routes, not hitting the hole correctly. There were some blocking schemes that were messed up, but nothing serious.

“Fabian had a great game, Efrain (Villanueva) had a great game. Chris Rodriguez played our safety spot. He stayed back, didn’t let anything get over his head. For a first-year kid … he did a great job not letting anything behind him. That was a big part of us containing what they wanted to do.”

The task gets harder this week, with the Hornets facing a Mineral County team that scored 138 points in wins over Whittell and Sierra Lutheran before a 44-6 loss Saturday in Virginia City. Game time is 7 p.m. in Beatty.