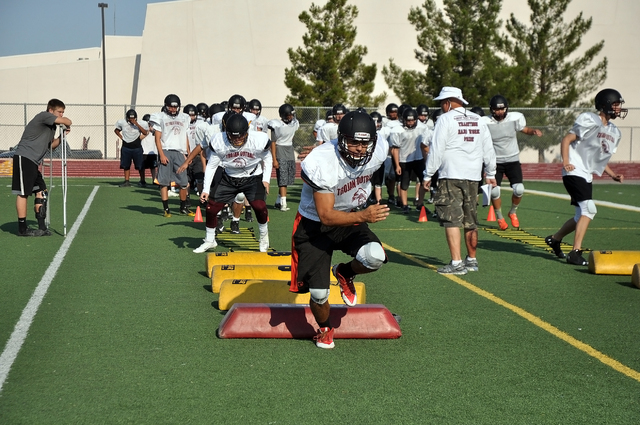 The new limits are for minimizing head impact exposure and concussion risk in football.

A report on exposure limits was given at the July 2014 Concussion Summit Task Force and in it the report recommends no more than 90 minutes total of full-contact practice in a week and full contact in no more than two or three practices in a week.

Assistant Director of the NIAA, Donnie Nelson, said the NIAA did surveys on the impact of the rules change and they got no resistance from the football coaches.

A lot of coaches were fine with the changes, Nelson said. There was no push back from the coaches.

Nelson said these changes started some years ago.

Its like a growing train all moving in the right direction, he said. This started as a philosophy, then it was a recommendation and now its a mandate. Trojans Athletic Director Ed Kirkwood said that the Trojans coach Joe Clayton was well below the contact limits.

The Pahranagat Valley High School athletic director, Brad Loveday, said his championship football team will also have no problems with the change.

Ken (head football coach) only has about one hour of full contact each week, so it does not affect us at all, the AD said.

The report uses the USA football definitions of contact and categorizes full contact as both thud and live action under those definitions.

The common characteristics of both thud and live action are that initial contact is made at game speed and there is no predetermined winner in the contact whether or not a player is taken to the ground.