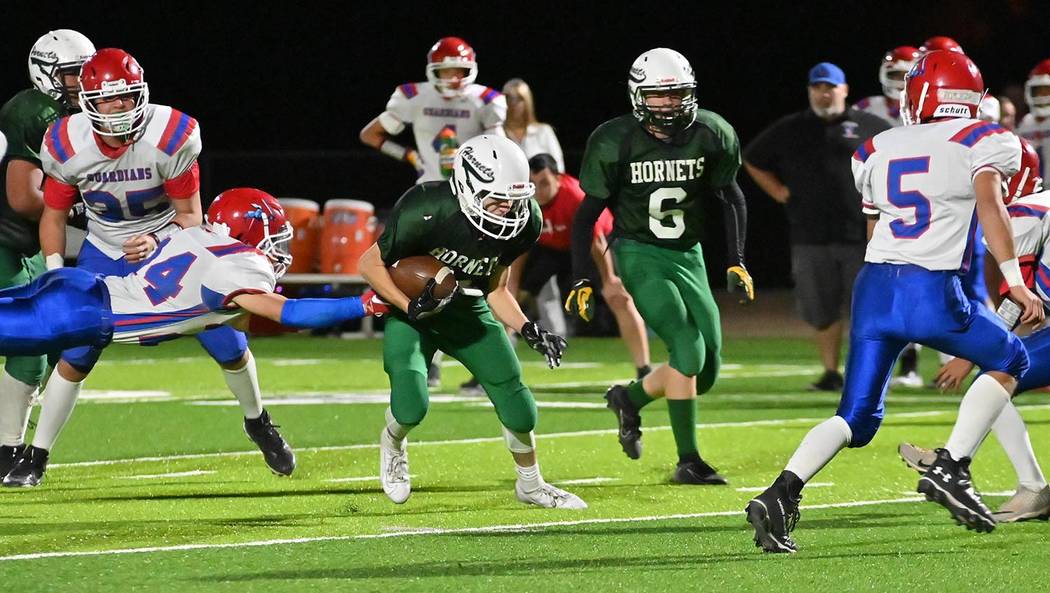 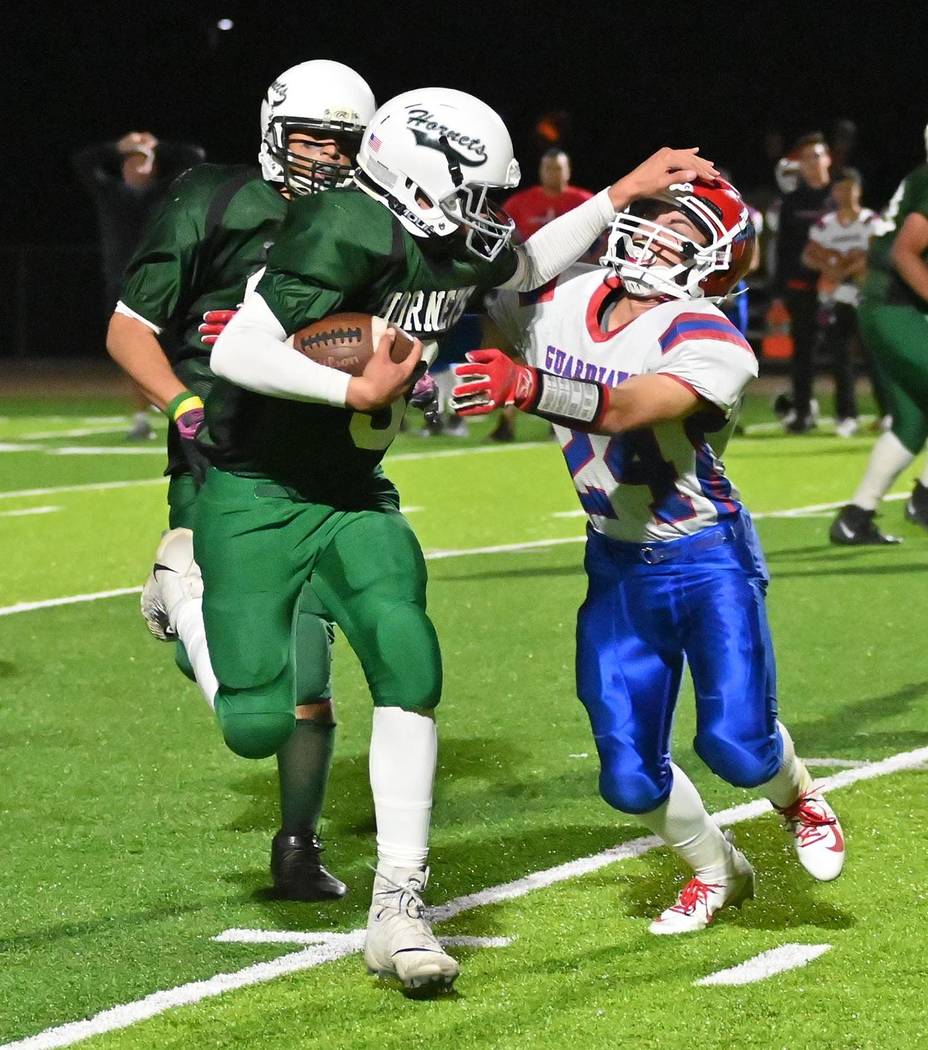 Richard Stephens/Special to the Pahrump Valley Times Freshman Francisco Granados dismisses Green Valley Christian's Talon Smith on his way to a first down Friday night during Beatty's 40-26 loss to the Guardians at Beatty High School.

A year ago, the Beatty High School football team easily handled Green Valley Christian, beating the Guardians by a 40-6 score.

Sometimes a year is a very long time.

“We played that bad,” Beatty coach Leo Verzilli said. “We had penalties, we had fumbles, our defense was lining up in the wrong place. It was just an ugly game by us.”

Verzilli acknowledged the Guardians are a better team than last year; in fact, he didn’t think they were all that bad in 2018 despite the lopsided score. But the Hornets did very little right in falling to 1-2, 0-1 in the league.

“Everything that could go wrong was wrong,” Verzilli said. “We had a negative punt. Our pass blocking was terrible. We had missed assignments on running plays. We haven’t had a kick run back all year, they ran the second-half kickoff back.”

Green Valley Christian sophomore Christian Nelson returned that kickoff 80 yards for a score. To add insult to injury, those were the first kickoff return yards Nelson has had all season for the Guardians (1-3, 1-1).

Speaking of injuries, the Hornets — much like their Nye County counterparts at Round Mountain, Tonopah and Pahrump Valley — have had more than their share.

“Kids are getting hurt, kids are getting sick,” Verzilli said. “Our biggest problem is stability in positions. We just don’t have people playing week in and week out in the same spot. We’re moving around for injuries and other things. Things aren’t smooth, and they should be by now.

“It’s everything from sprained ankles to broken bones. We’ve got kids that have been sick for a month, coughing and can’t breathe. They can’t shake it. It’s just been one thing after another.”

The Guardians certainly didn’t shred the Hornets through the air, as senior quarterback Collin Killoran completed 9 of 15 passes for just 72 yards with a touchdown and an interception. But the visitors often were working with short fields, as they intercepted 3 passes and recovered 2 fumbles. The Guardians also recorded 3 sacks for 15 yards.

And the Hornets’ physical problems didn’t stop when the game started. Verzilli said Fabian Perez left the game with an injury, while Francisco Granados sprained an ankle. But the in-game injuries did lead to one of the few bright spots for Beatty.

“Noel Gutierrez stepped in at running back for Fabian, and he had a good night,” Verzilli said of the junior. “He ran the ball well. He opened our eyes and played better than expected.”

Beatty surrendered 244 rushing yards to a team that managed only 55 during last year’s game. But last year was a very different story for the Hornets.

“We had no injuries the last couple, three years,” Verzilli said. “No sprained ankles, no knees and we’ve avoided being sick. And this year we’ve got kids hacking and coughing, and it’s going on for weeks. They just can’t shake it. It’s been one of those things.

“It’s been a weird year. Our numbers are down, and we just do the best we can from week to week.”

Week to week this week means Beaver Dam, which gives the Hornets a bit of a break.

The winless Diamondbacks (0-5) have been outscored 187-22 this season, including a 46-6 loss Sept. 20 to a Mountain View Christian team that Beatty routed 52-0 a week earlier.

“Hopefully, we can get some kids and get them some playing time,” Verzilli said. “We’re going to have to play some young kids, and they’re still shy and timid. It just (is) what it is. Hopefully, somebody steps up and fills a void.”

The Diamondbacks and Hornets will kick off at 7 p.m. today, Friday, Oct. 11 in Beatty.