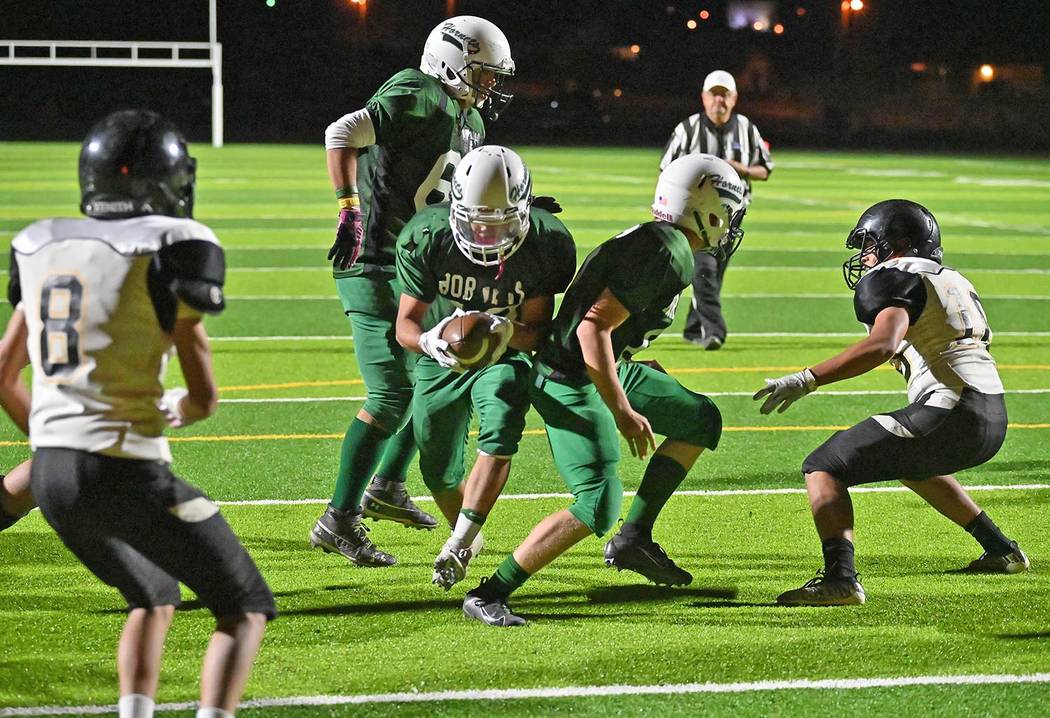 Richard Stephens/Special to the Pahrump Valley Times Senior Fabian Perez bursts through a hole in the line for a Beatty touchdown Friday night during the Hornets' 44-30 loss to Mineral County. 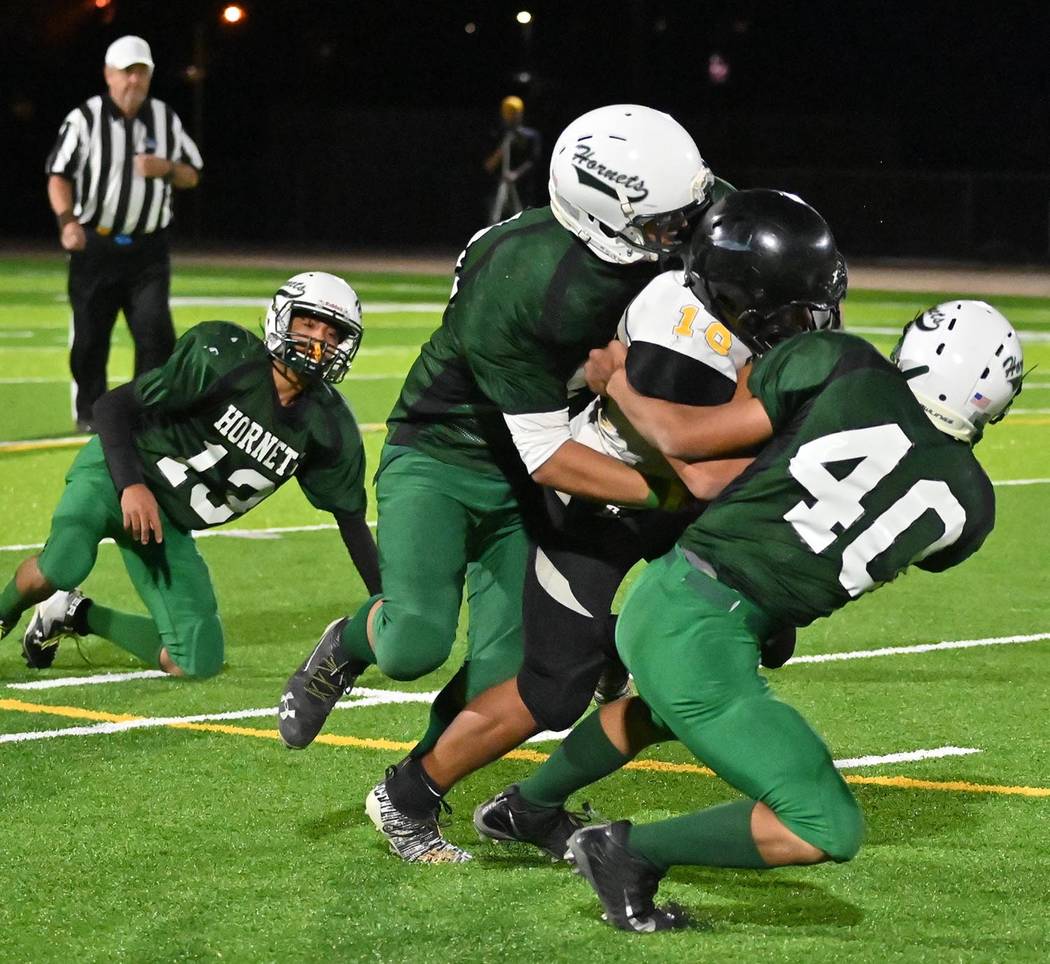 Richard Stephens/Special to the Pahrump Valley Times Beatty's Adriel Oseguera and Austin McKenzie team up to bring down a Mineral County runner during Friday night's game in Beatty. 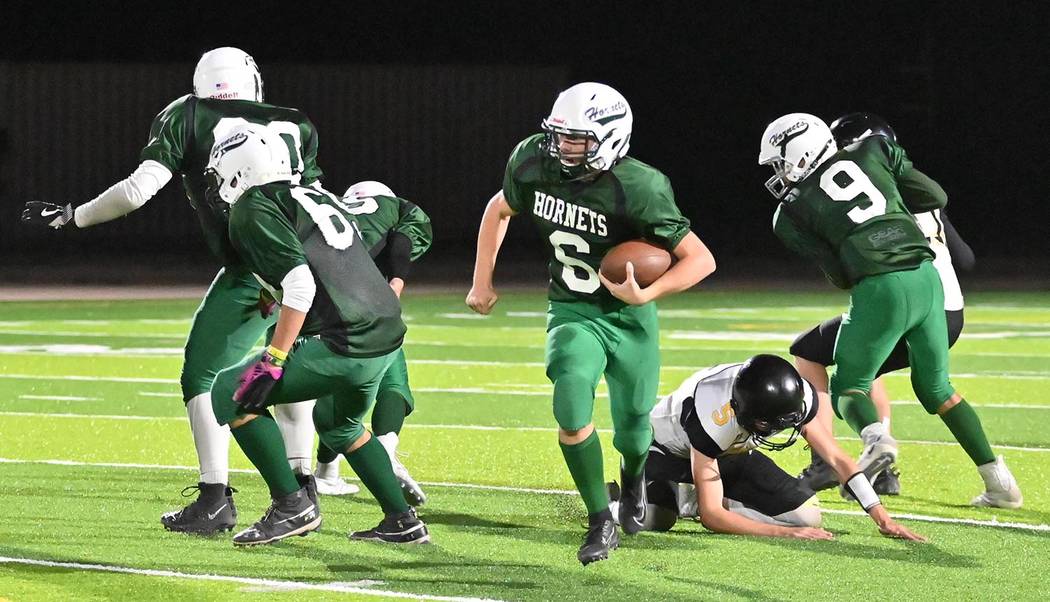 Walking off the field after his team’s 52-0 dismantling of Mountain View Christian two weeks ago, Beatty High School football coach Leo Verzilli said the next opponent would present a much tougher challenge.

He was right, but the Hornets led at the half and were even going into the fourth quarter last week against Mineral County.

The Serpents took advantage of a Beatty fumble and then caught the Hornets defense on a deep ball to score two fourth-quarter touchdowns and pull away for a 44-30 victory Sept. 20 in Beatty.

“They’re a good football team, hard-nosed kids,” Verzilli said of Mineral County. “They throw a lot. They’re well balanced; they have that kid who’s 6-5 and throws the ball all over the field. They’re sending four (receivers) out at a time.”

That 6-5 kid would be senior quarterback Seth Bozzi, who completed 12 of 23 passes for 236 yards and 4 touchdowns with 2 interceptions. Senior Tony Torres was Bozzi’s favorite target, with 6 receptions for 143 yards and 3 touchdowns. Torres also was the Serpents’ leading rusher, with 19 carries for 105 yards and a touchdown.

Still, the Hornets had the upper hand at the half, leading 30-14 after the teams were tied 14-14 through one quarter.

But after the Hornets fell behind, it was a different story, as the Serpents were strong defensively against the pass.

“We just could not throw at all,” Verzilli said. “They were sending everybody, and with young kids in there it just didn’t work at all. After they went up, they had us. They just brought the house every down, and we couldn’t overcome that.”

Bozzi and junior Landon Scarlata each had a sack for the Serpents, while Bozzi and Torres each recovered a fumble. Beatty did have two interceptions, one of which was run back by Chris Rodriguez for a touchdown.

Beatty (1-1) will welcome Big Pine of California at 7 p.m. tonight in the second of five consecutive home games for the Hornets. The Warriors are 0-2, including a forfeit loss to Pyramid Lake two weeks ago.

“It’s a small school in California,” Verzilli said. “We’ve played them a few times in the past. It should be a good game for us. Their program has gotten better, so it will give us a test.

“We should be successful. They run a basic offense and a basic defense. I’m glad we’re playing them this week.”