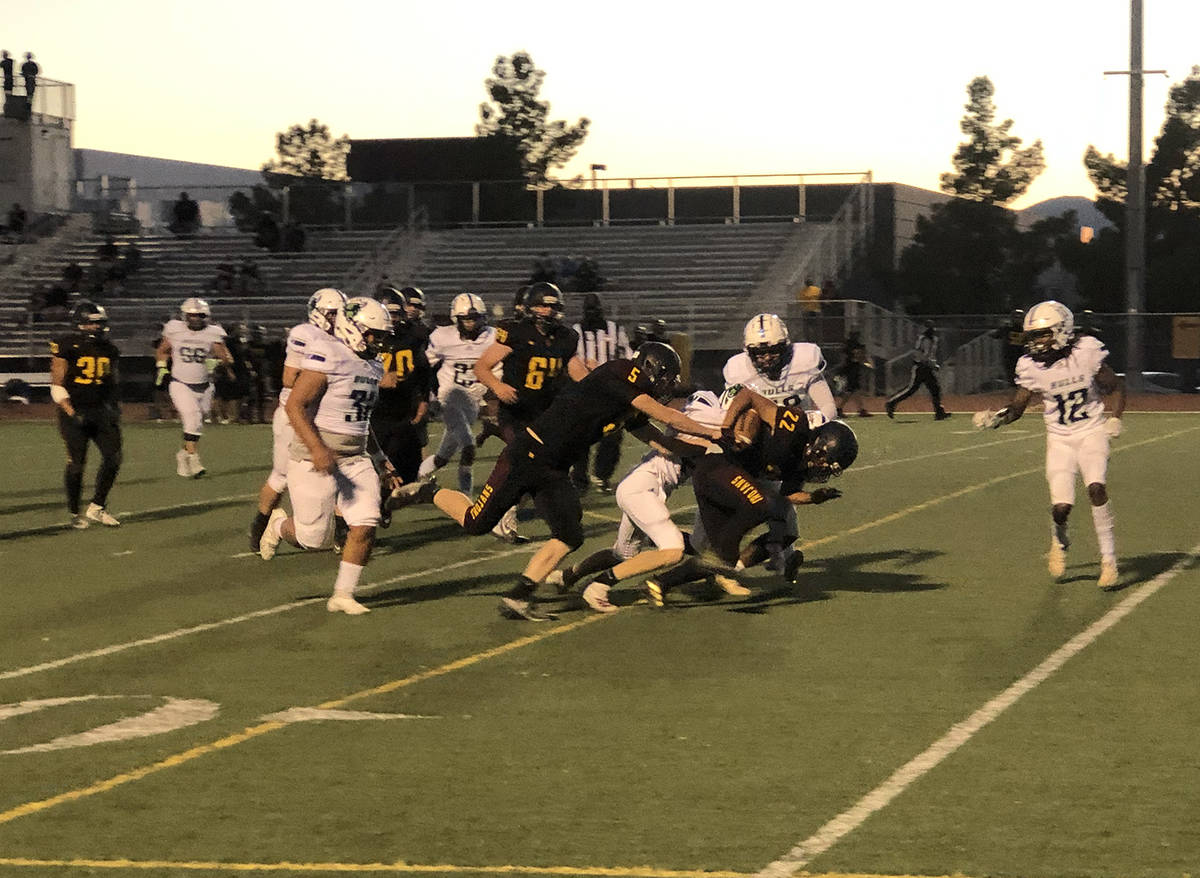 Tom Rysinski/Pahrump Valley Times Pahrump Valley junior Henry Amaya bulls his way for more yards during the first quarter of Friday night's game against SLAM Nevada at Trojan Field. Amaya scored on the next play as the Trojans defeated the Bulls 22-20. 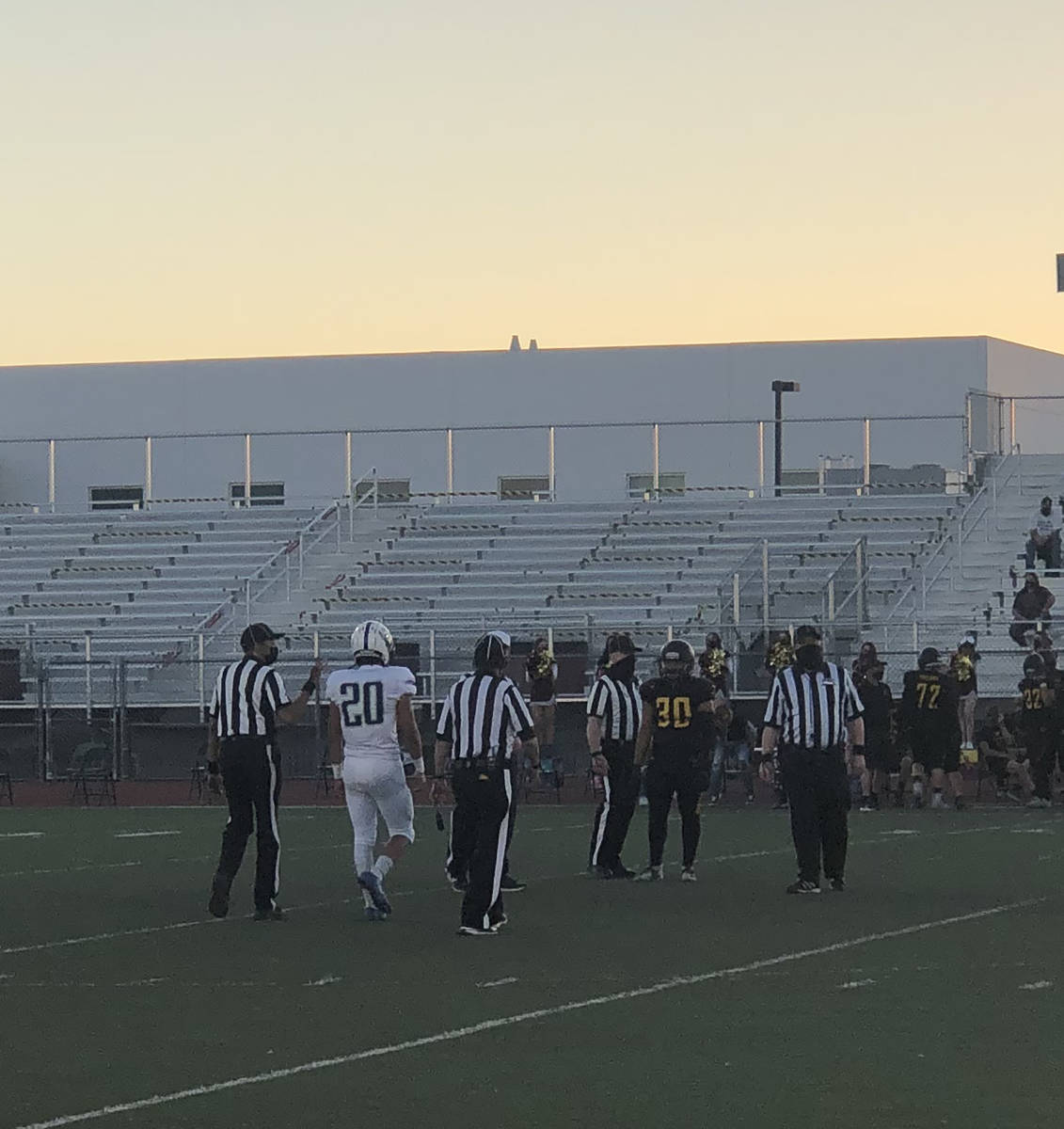 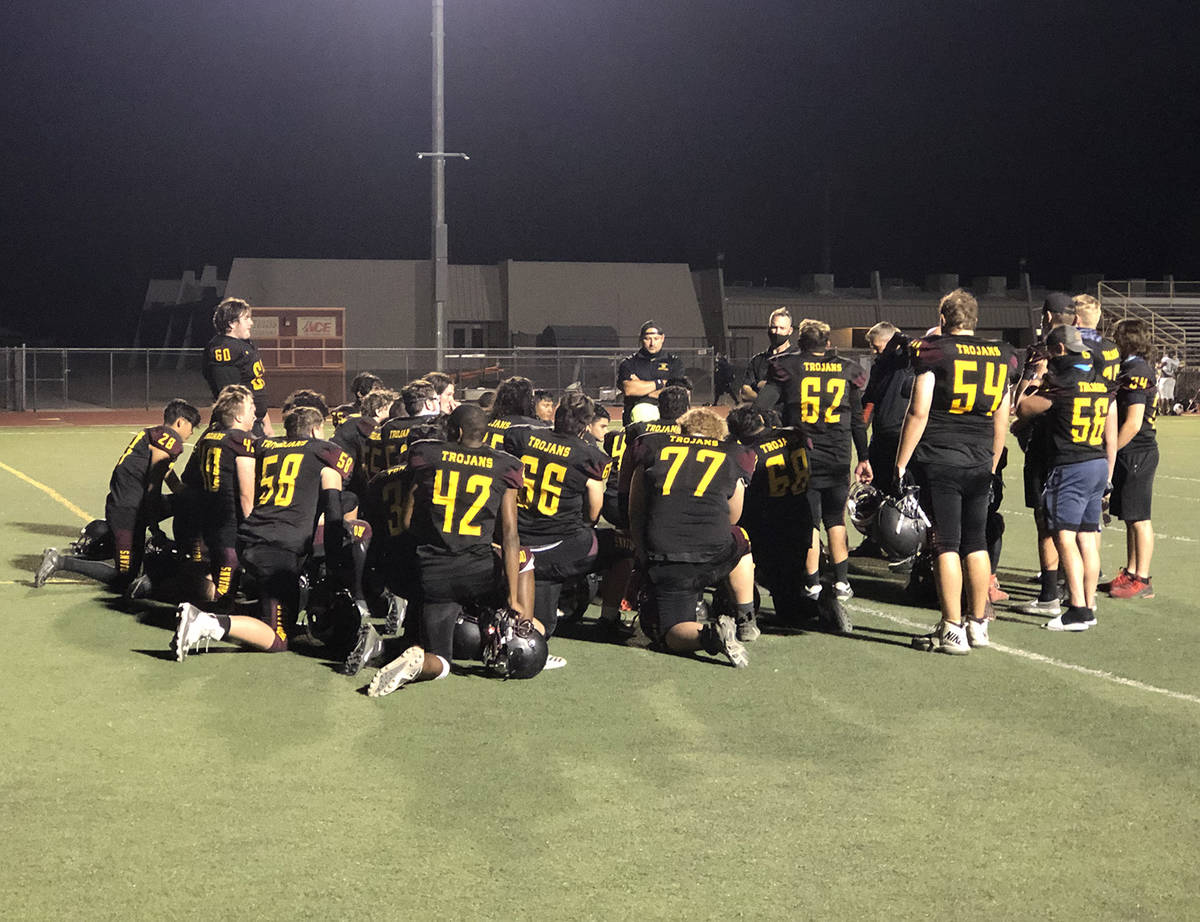 He would have been too busy searching his phone to get you the mental health he felt you clearly needed.

Somehow, that is exactly what happened Friday night at Trojan Field as Henry Amaya ran for 89 yards and two touchdowns to lead the Trojans to their first win of this shortened season, 22-20 over the Bulls.

The final margin was preserved when the Bulls failed to get in the end zone on a 2-point conversion try with 1:56 remaining in the fourth quarter.

Junior quarterback Joseph Kuykendall, who spent much of the night fleeing the pocket, had time to throw and found Marcellus Moore for a 36-yard touchdown, but when he rolled right on the 2-point try, he had no room and no open receivers and threw a pass into the turf.

The Trojans had little trouble running out the clock, with Daniel Edghill taking advantage of Bulls defenders trying to strip the ball rather than tackle him for 21 yards before Andrew Avena turned a routine quarterback sneak into a 13-yard gain, then took a knee three times to wrap it up.

The win was a critical one for the Trojans’ confidence after opening losses to rivals Moapa Valley and Virgin Valley.

“I knew they needed to get this win just to help them mentally, because we are very young,” Clayton said.

And after the fumble-fest against the Bulldogs, just holding on to the ball made a huge difference in the Pahrump Valley offense. Clayton said there was no secret to solving that problem.

“New quarterback,” said Clayton, who had senior Andrew Avena under center all night against SLAM. “Andrew doesn’t fumble the ball. Obviously Andrew’s a senior, and they will get to watch him run the offense. I think where his confidence comes from is that he was one of the sophomores on that state semifinal team. He knows the offense really well. Him hopping in there wasn’t like everything was new to him.”

Pahrump Valley’s only passes came on the final three plays of the first half, but Avena’s presence stabilized an offense that couldn’t get untracked the previous week. That allowed the offensive line to get into a flow which, in turn, enabled the Trojans’ running backs to show what they can do.

What they can do is combine to run 36 times for 284 yards. Five Trojans broke off at least one run of 10 yards or more — the Trojans had 11 of those for the game — and there was a rhythm to the offense that had not been there the first two weeks.

It didn’t look good early, as SLAM chewed up 8 minutes, 45 seconds on an impressive opening drive that stalled thanks in part to a holding penalty and three pass breakups, one by Edghill and two by Avena. A 16-play drive netted zero points.

“That was a huge lift,” Clayton said. “Our boys fed off of that.”

The Trojans wasted no time kicking the Bulls when they were down, using eight plays to get on the scoreboard. Four running backs split the carries — highlighted by a 26-yard rumble by Zack Cuellar — before Amaya capped the 75-yard drive with a 4-yard scoring run. Amaya then ran in the conversion for an 8-0 Trojans lead.

“We took those two losses in the first two weeks and have been adjusting our plays,” Amaya said. “This week was very important. We fixed it all week in practice and came out hard.”

The Bulls came back with another strong drive, with Kuykendall completing passes to convert two third downs and one fourth down during an 80-yard march to the end zone. Damien Sanchez’s booming PAT made it 8-7.

Getting the ball to start the second half, the Trojans started on their own 43 after a short kickoff and used just six plays to score, as Soriano started to go right, saw no room, shifted gears, broke to his left and scampered 26 yards for a touchdown. Amaya’s second conversion run of the night gave Pahrump Valley a 16-7 lead.

The Bulls were moving again — seven plays gained 45 yards — before the Trojans’ defense again rose up. Ozzy Zawisiak was stopped for no gain, Cuellar sacked Kuykendall for an 8-yard loss, and Rance Bill intercepted Kuykendall inside the Trojans’ 10 to end the threat.

Once again, the Trojans capitalized on the Bulls’ failure to cash in on a good drive. Edghill for 10, Amaya for 15, Dilone for 9, Avena for 17 and Edghill for 6 put the ball inside the SLAM 30 to end the third quarter.

Amaya then opened the fourth with a 5-yard run and, after the Bulls were flagged for being offside, he raced right and up for 19 yards and a 22-7 lead.

The Bulls quickly cut the lead to eight, with a 34-yard run by Braeden Williams highlighting a seven-play drive capped by a 4-yard keeper by Kuykendall. Another booming PAT kick by Sanchez and it was 22-14 with 7:48 remaining.

Next up for Pahrump Valley is a rematch against Virgin Valley at 7 p.m. Friday at Trojan Field.