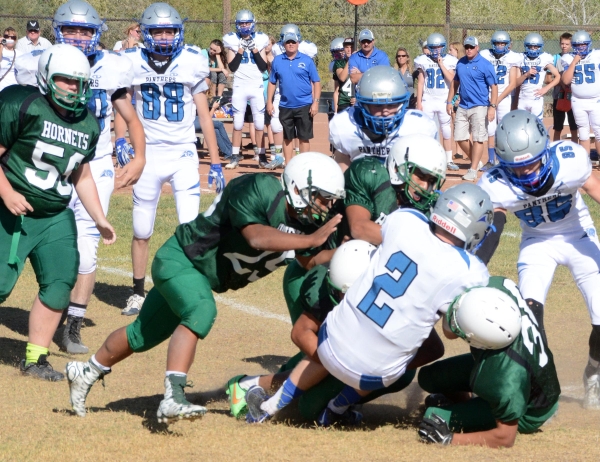 There will always be critics of Pahranagat Valley’s football program. After all, the Division IV powerhouse has the third longest winning streak in the country and since 1978 has won 19 state titles in football.

This program has often been called the Bishop Gorman of eight-man football.

Bishop Gorman last week announced that it is scheduled to play some of the best football teams in the country. They are in a league with four other teams and this leaves them five non-league games, where they can play teams of their choice. This type of schedule will more than likely silence their critics, but Pahranagat Valley does not have a schedule, which allows for a schedule like Bishop Gorman’s. So the Panthers still have their share of critics.

A coach in the same division as Alamo, who wished to remain anonymous, criticized the way the Panthers chose their non-league opponents.

“It is interesting because it has been said through the grapevine that a Californian eight-man football team wanted to play Alamo but Alamo would not due to their winning streak,” the coach said.

He explained that he had heard that this team was competitive and better than the team that Alamo played this year from California.

Panthers athletic director Brad Loveday says there is no truth to this accusation.

“It’s laughable to say we don’t make the best effort to play the best teams,” Loveday said. “We will play anyone that is good and is willing to come here. We get two non-league games a year and in those two games we play one Nevada team and one out-of-state team.”

He then explained that they have had problems getting good teams to play.

“One team, Joshua School, we stopped playing because their fans got out of control in the stands,” he said. “Last year we played Thacher School. That game was close, so our football coach tries to get the best schools he can. Thacher is a private school and they promised to come to our school next season. We barely beat that school, 34-30.”

Loveday said a lot of schools call them and it’s not hard to find schools that want to challenge you.

“Some not so good, they may have a 2-9 record or something like that and still want to play us,” he said. “So when we get calls we have to make sure they are legitimate contenders, like they won their conference or something.”

He said the schools want to play Alamo, but are not willing to come out to Alamo to play them.

“That’s a deal breaker,” Loveday said. “Scheduling can also be difficult because we start league only after two games.”

He also pointed out that his school was not like Bishop Gorman, who can afford to travel.

“We also have problems with money,” he said. “We went to Avalon, Catalina one year and that year we had to pay for the ferry crossing in addition to the transportation to get there. Traveling puts a strain on our boosters, but the idea is to find the best team we can play to make our own team better.”

Loveday said that was the main point of traveling, which was to play the best teams.