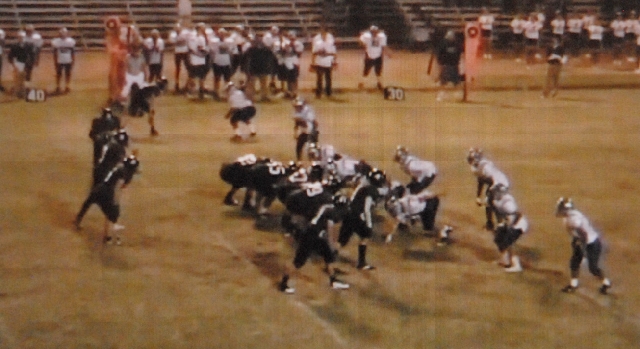 The Trojans football team started its long summer and continues to evolve into a better team. The Trojans retire the pistol for a much simpler offense.

Trojans Coach Joe Clayton brought the Pistol Offense to the team in hopes to start a winning tradition. The team went 2-3 in league and 2-8 overall last year. They went to the playoffs for the first time since 2006.

The offense had some successes but according to Clayton it does not fit the new team. So this year he will be introducing a new offense called the Jet Offense.

Clayton found a quote from Leonardo da Vinci, “Simplicity is the ultimate sophistication.”

“This quote sums up our offense and our defense,” he said. “It’s extremely simple on both sides of the ball, but it looks complicated. It’s simple to learn. We don’t have to spend the whole summer running this extravagant offense like we have done in the past.”

Clayton said the team has never gone away from this offense at the junior varsity level, which is an added plus because most juniors and sophomores already have learned it.

“We adjusted to our personnel,” he said. “Last year that is what we did with the pistol, but our junior varsity ran the Jet Offense and we never have gone away from that.

“The JV was very successful running the jet. When we went to the pistol, it was because our offense was a lot different than our JV. So we are not running the pistol for sure.”

Clayton explains the jet runs out of one formation that accommodates multiple plays.

“We are going back to the variation of the double wing but it’s a jet offense and everything comes off that jet sweep,” Clayton said. “It’s just misdirection and a lot of times the plays look identical but a different player gets the ball. We can fake the dive, give it to the jet, we can give it to the jet and fake the dive.”

In the jet sweep the flanker or receiver, comes from the outside of the formation to receive a hand-off from the quarterback. Two running backs act as lead blockers.

The transition brings the question of who will be quarterback. Pahrump Valley has had a problem in the past with quarterbacks said Clayton.

This year with sophomore TJ Milk, the quarterback job is up for grabs. TJ is coming up as a sophomore and according to Clayton is very hardworking.

Milk did a great job running the jet last year. Clayton believes he will be a strong contender this year and give last year’s starter, AJ Segura a run for his money.

“The kid is a very big kid and strong and he is in the weight room every day,” the coach said. “I am not saying he is going to be the quarterback, but right now he is a serious backup at this point. He has some serious skills and he will push AJ. As far as I am concerned the quarterback spot is open. TJ is a really strong kid.”

This summer the Trojans will be going to the Southern Utah University football camp to help prepare them for the tough Division I-A schedule. They are sending a surprising 30 players.

“We were only planning for enough to have a varsity team up there, which does not include the freshman class. That is sophomore through freshman so there is a bunch of committed football kids at school, it’s $285 a player,” he said.