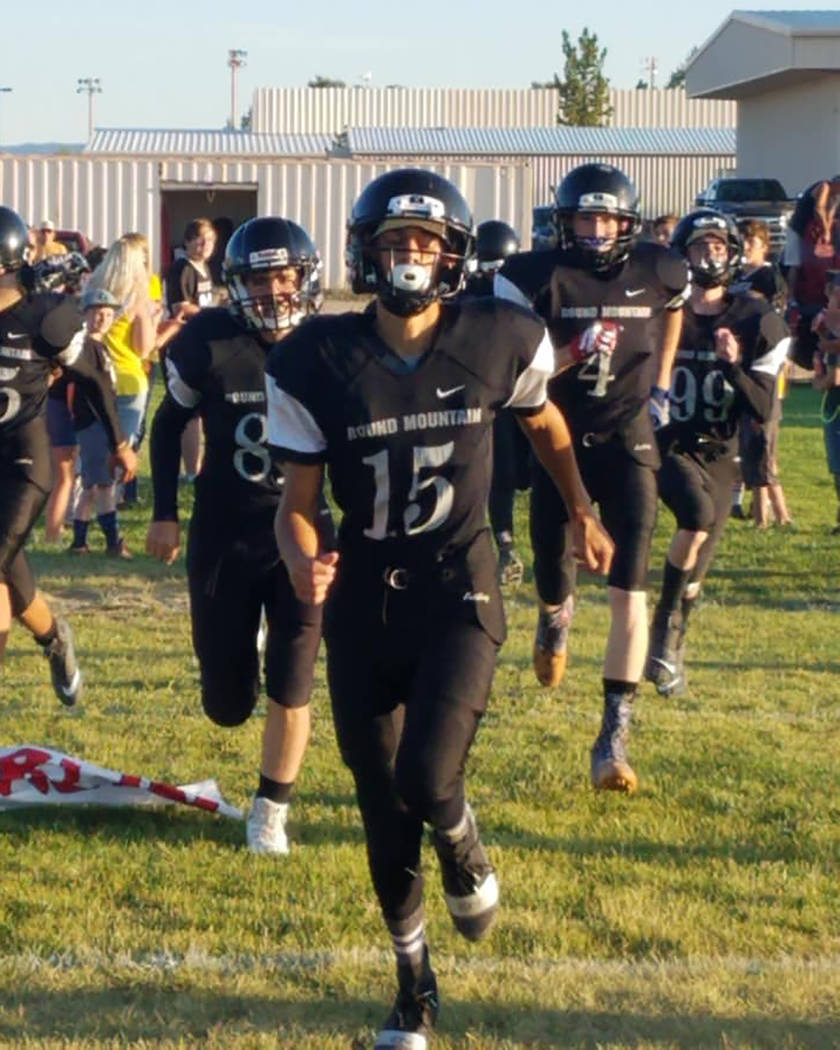 Special to Times-Bonanza & Goldfield News Sophomore Koleby Harmon leads the Round Mountain football team onto the field before Friday night's opener against Carlin at Round Mountain High School. 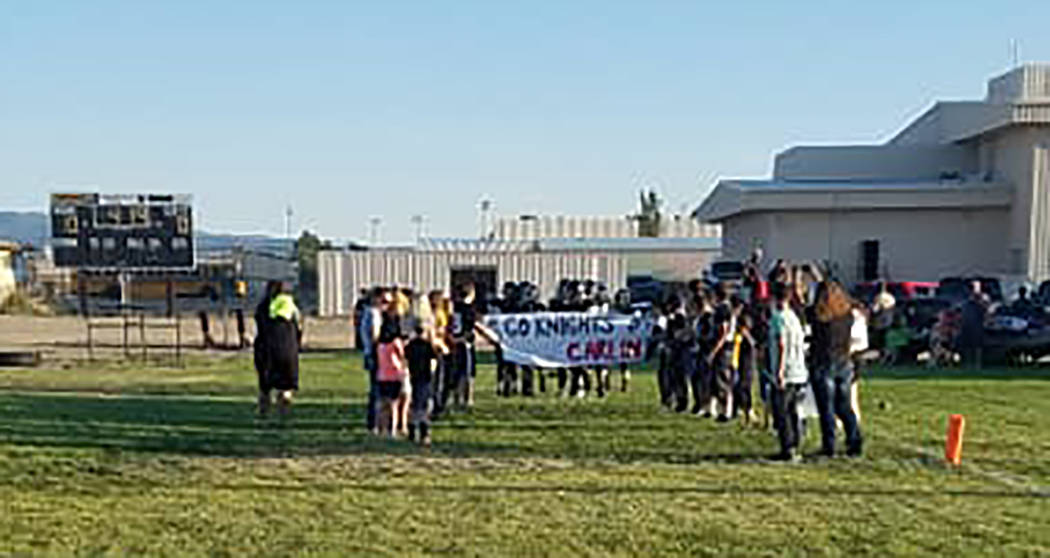 Special to Times-Bonanza & Goldfield News The Round Mountain High School football team prepares to take the field Friday night for the season-opening game against Carlin. 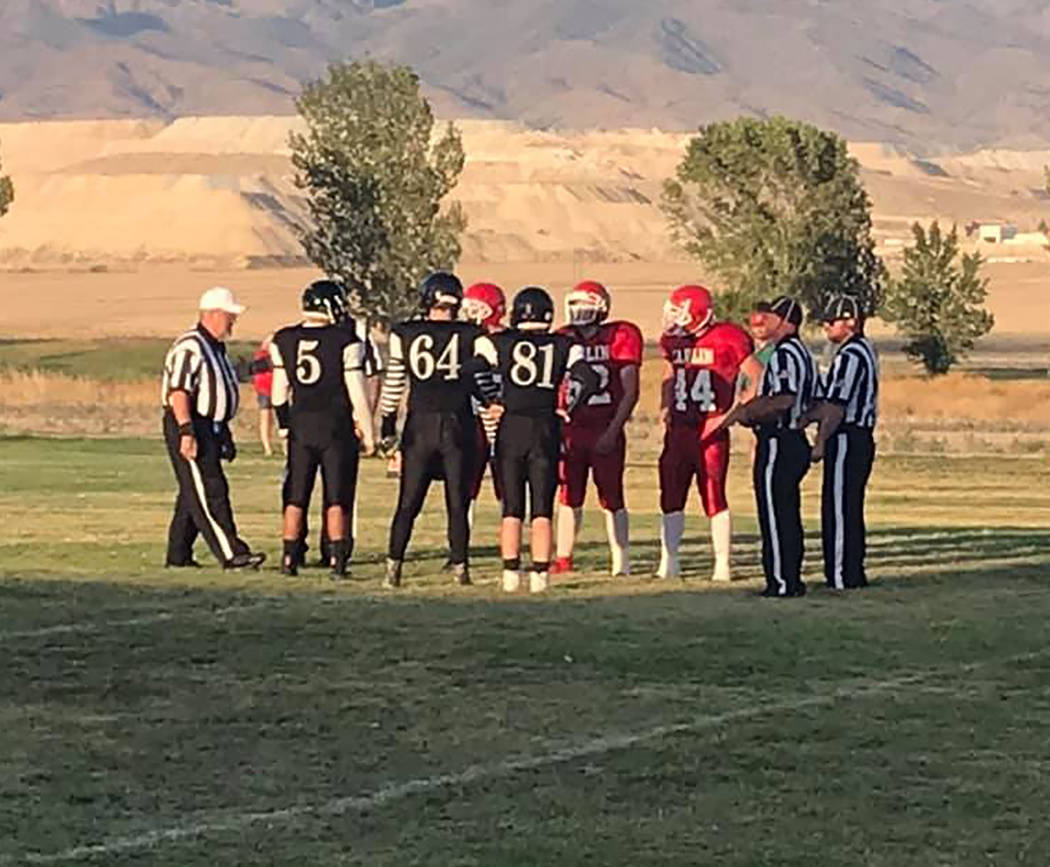 Special to Times-Bonanza & Goldfield News Team captains for the Round Mountain and Carlin football teams meet at midfield before Friday's game in Round Mountain.

Football season got off to a rough start in northern Nye County.

Tonopah High School did not have enough players with the required 10 practices before its scheduled opener last Friday night against Independence, while Round Mountain was forced to forfeit its game against Carlin when injuries reduced the Knights’ roster to seven players.

“We were down 20-0, and it was stopped about halfway through the second quarter,” Round Mountain assistant coach Rickey Stewart said. “We had four kids get hurt all within a couple of plays, which only left us with seven players.”

The Knights have had a smaller roster than most of their opponents the past couple of years, with their most recent forfeit before Friday coming during the 2017 season, when they forfeited a Sept. 22 game to Pahranagat Valley.

Round Mountain did not muster much offense before the game was stopped, although senior Diego Rodriguez recorded a 15-yard run. Senior Colton Alstatt was busy, leading the team in tackles with four, getting credited with a pass defensed, booming a 55-yard punt and rushing for 14 yards. Rodriguez and Alstatt were the only Knights to finish with positive yardage on offense, while freshman Gary Svoboda racked up 31 yards in kickoff returns.

Carlin had a 12-0 lead after the first quarter and added a touchdown during the second to account for the final score.

This week’s game against Wells has been canceled, but the Knights are hopeful they can get back on the field next week for their next home game on Sept. 6.

“The kids are OK,” Round Mountain athletic director Jake Topholm said. “Hopefully we are back for Beatty, but I just don’t know.”

“We may have lost one for a few weeks, but we will have to see,” Stewart said. “Luckily, we don’t have any conference games until October.”

The desire to play is certainly there, whether it’s next week against the Hornets or in the Central League opener Oct. 5 at Coleville.

“The kids we have really want to play and have great spirit and drive,” Stewart said. “Unfortunately, when you only have 11 and four get hurt about the same time there is not much you can do.”

Meanwhile, nobody was hurt in Tonopah, but the schedule became an issue for the Muckers. The Nevada Interscholastic Activities Association requires an athlete in any sport to have taken part in 10 practices before playing in a varsity game. With school starting Aug. 12 and the first game scheduled for Aug. 23, anyone hoping to play in the opener must have been at practice every day.

“We had seven,” Tonopah coach Duffy Otteson said of the players who had 10 practices in before Friday’s scheduled opener at home against Independence. “We had a bunch with nine.”

The opportunity was there to make the most of the situation, and Tonopah gave it a shot.

“We were going to do a scrimmage with them, and then they couldn’t come for a scrimmage,” Otteson said.

Otteson knew this was a potential problem right from the start of full practices on the first day of school. Two of his projected starters were unable to stay for practice because there was no activity bus and thus no way for them to get back home to Dyer. Missing any practice after the first one for any reason would mean not getting in 10 in time to play against Independence.

“Normally that is our scrimmage weekend,” said Otteson, who said the season should not start this early. “This would probably happen every year if they keep it like this.”

But Otteson said this issue is over for his team, and he expects to dress 20 players Friday night against Mammoth in Mammoth Lakes, California, in the Huskies’ opener. The Muckers return home Sept. 6 to take on Wells.