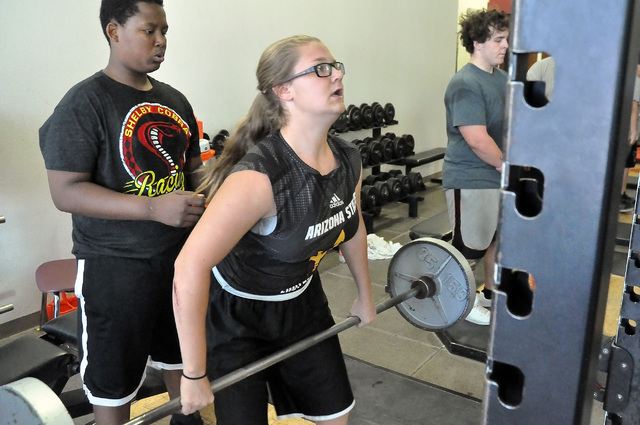 Horace Langford Jr / Pahrump Valley Times Deja Jackson hits the weight room with the other football players, who really could careless if she plays or not. 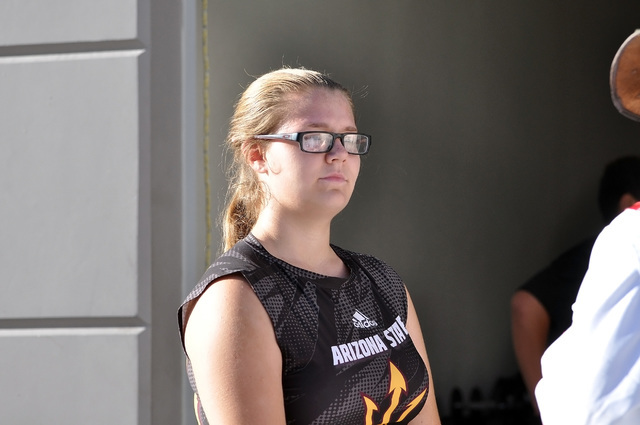 Horace Langford Jr / Pahrump Valley Times Deja Jackson at 142 pounds, maybe undersized as a freshman lineman, but she doesn't care. She just wants to play a sport she has been playing since she was 8. 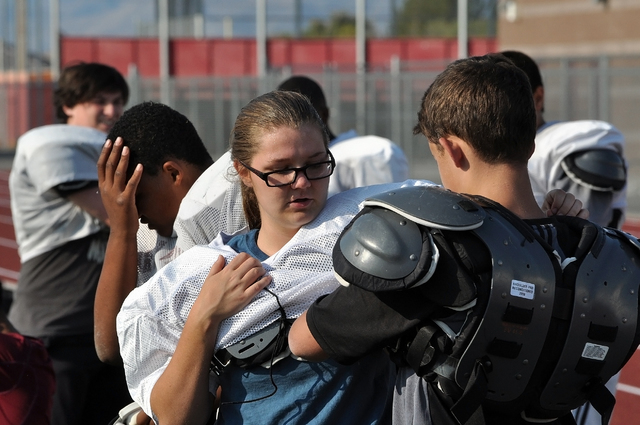 When it comes to girls sports, most girls are told if they want to play a sport in high school to play softball, soccer or even basketball, but not football.

Deja Jackson, a Pahrump Valley High School freshman, didnt get that memo and is trying for a position on the freshman football team this year.

In the country, according to the National Federation of State High School Associations, there were 1,565 girls playing football in the nation in the 2014-15 season.

Jackson has been playing the sport since she was eight years old, when she first started playing tackle football in Pop Warner.

I started playing the game because of my older brother, Jackson said. He played high school football for Bishop Gorman. I was always around the game growing up and I started playing mainly because he started playing and I just wanted to be like him and never really considered myself a girl.

Of course there is a big difference between playing Pop Warner football and high school football. The kids are usually bigger in high school. Jackson is 5 foot 4 inches tall and close to 142 pounds, but shes not worried about her size.

And when girls play football in high school, most are kickers. Not Jackson.

She realizes that there may come a time that she wont be able to play because of her size, but until then she says she will play as long as she can.

I can hit, she said. And I can take a hit. I am so full of adrenalin while I am on the field that I dont feel the blows. When I cant play any positions, thats when I will quit. I might even change my position to running back, so I can play more. I am pretty fast.

Jackson said she has been laid out by boys more than once.

I still remember when I got hit in the small of the back, she said.

Her middle school coach, Lloyd Peugh, said he wasnt surprised to hear she was playing for the freshman team.

She was pretty good, her coach said. She was fairly aggressive and worked hard too. I thought she really improved last season.

Jackson said she has had to work harder than the other players because once the other team found out she was a girl, they would target her and then double-team her.

Also, not all the guys liked playing with a girl.

Some of the guys would tell me that I was going to get hurt, Jackson said. But the coaches treated me the same as any of the other guys and thats all I want.

Jacksons father is a single parent and he supports his daughter playing the game.

She has always been a good athlete and competitive, Ernie Jackson said. I think the sport teaches her life-long lessons and how to work with others. I have no reservations letting her play.

Her father feels that playing football is something Deja Jackson must do.

I think she has to prove to herself that she can do it, he said. She is a different type of girl that has this drive to play the game. She wont quit something once she has started.

Deja Jackson was one of three girls that came out for football but is the only one remaining on the field.