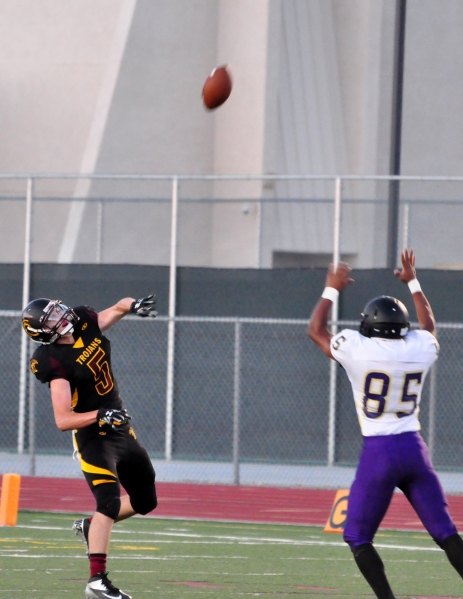 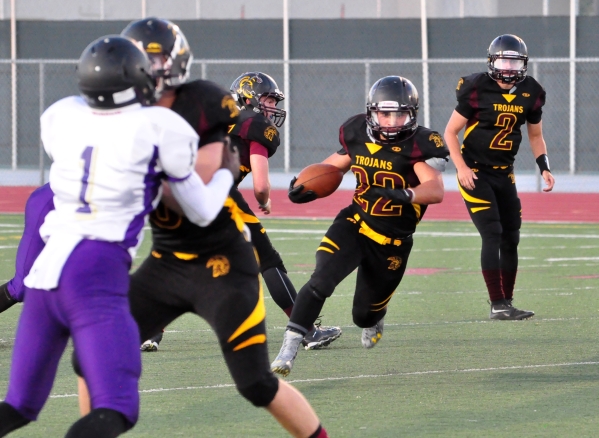 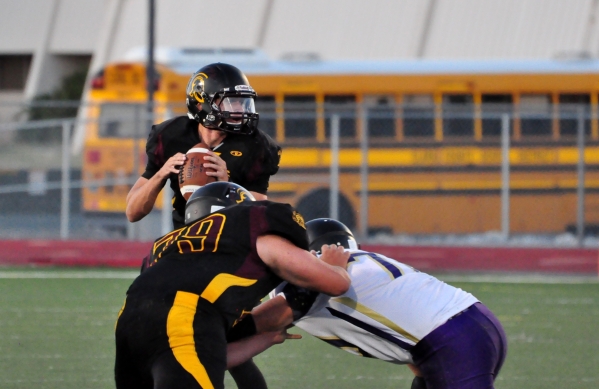 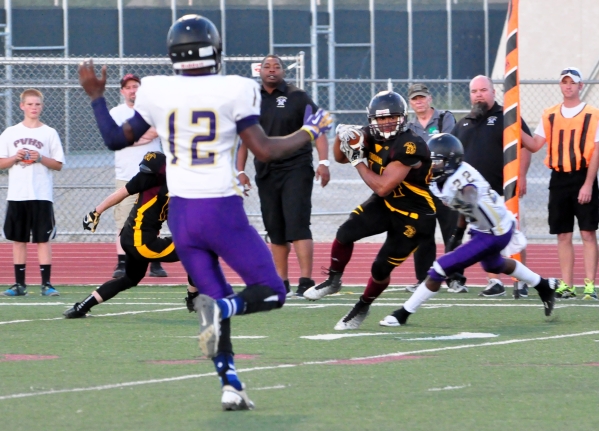 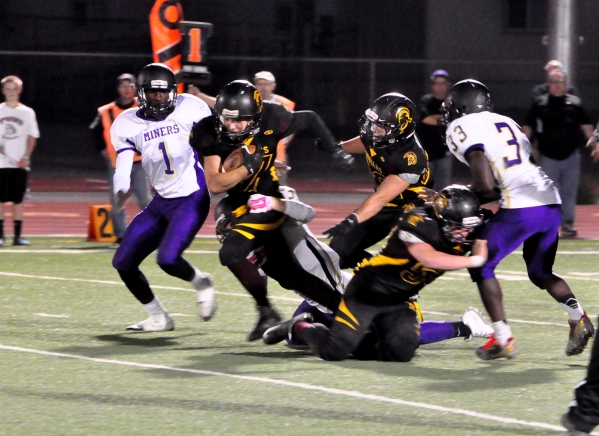 The Trojans lost to Sunrise Mountain 20-14 on Friday in a close nail-biter that could have easily gone the other way if not for critical turnovers.

Pahrump had many chances to win, but Trojans coach Adam Gent admitted that his team just made too many mistakes.

“We had some opportunities, but we shot ourselves in the foot a couple of times,” he said to the team after the game. “We just ran out of time.”

With the loss the Trojans are 1-1 overall and start conference play at home against Mojave on Friday at 7 p.m.

The game came down to which team made the fewest errors. In the end, turnovers made the difference and determined the winner. Sunrise Mountain was able to capitalize on Pahrump’s mistakes, while the Trojans couldn’t take advantage of the mistakes made by the Miners.

During the game, the Trojans defense played tough like they did at Del Sol. When they had to stop Sunrise Mountain, they came up with three turnovers in the game, keeping the game close and within striking distance.

“Yes, we wanted the ‘W’ but guys, what a great effort,” he said. “Just keep playing this way.”

If the offense hadn’t made the turnovers it did, Pahrump would have walked away with the game. The coaches seemed to agree and said to win the team will have to learn from their mistakes.

The first missed opportunity came in the first quarter as Pahrump opened with the ball and then made it look easy, crossing into Sunrise Mountain (2-0 overall) territory to the 41-yard line. On third and seven, quarterback TJ Milk threw an interception and the Miners had the ball on their own 17-yard line.

Sunrise then surprised the Trojans with the long ball, which put Sunrise in the red zone. They then took the ball in for the first touchdown of the game. They missed the point after and led 6-0.

Pahrump then responded with a 90-yard kickoff return by Devlin Dillon to make it 7-6.

The home team had another opportunity to score at the end of the half. The Pahrump defenses intercepted the ball at midfield, but the drive ended with a penalty. The score was 7-6 Trojans at the half.

The Trojans defense gave the team another opportunity to score in the opening moments of the second half, when Riley Sutton recovered a fumble on third and short at midfield, but the Trojans offense couldn’t put the ball into the end zone.

Sunrise Mountain then took the ball over and took it to midfield and had to punt the ball. On the return, the Trojans fumbled the return and the Miners took over in the Trojans’ red zone. They put the ball into the end zone to take the lead 13-7 and that’s how the third quarter ended.

Again, the Trojans responded well to the challenge and marched all the way deep into Sunrise Mountain territory with 9 minutes and 44 seconds to go in the fourth.

On a fourth and one play, Pahrump ran the ball and fumbled. The Miners took over on the 25-yard line and scored another touchdown in five plays to go up 20-7 with 7:34 to go in the game.

This put the Trojans in a do-or-die situation. The offense had their best drive of the game and took the ball flawlessly into Miner territory. On the drive, the Trojans converted two fourth-down plays for first downs.

Milk also had a long 20-yard quarterback keeper run, which took the ball down to the Sunrise 20-yard line. He then threw a TD pass to Parker Hart to make the game 20-14.

With 3:30 to go, the ensuing Trojans onside kick was unsuccessful, giving the ball to the Miners at midfield.

The Trojans had another opportunity to score, when their defense recovered a fumble at midfield with 2:26 on the clock. It appeared that the Trojans had one more miracle left up their sleeve, but Milk threw an interception and Sunrise Mountain took over the ball.

Most fans expected the game to be over and thought the Miners would be able to run the clock out with only 1:10 left, but again, the Trojans defense wouldn’t give up a first down and Pahrump got the the ball one more time with just 29 seconds to go and no timeouts left.

The Trojans started with the ball on their 20-yard line and they were forced to pass all four downs. The Miners defense held and ended the game.

Gent agreed with his coaches.

“Our boys didn’t lose this game,” he said. “We can beat that team. We fumbled at crucial times, but we ran out of time. Credit to them, that team will win some games. They will compete for the region.”