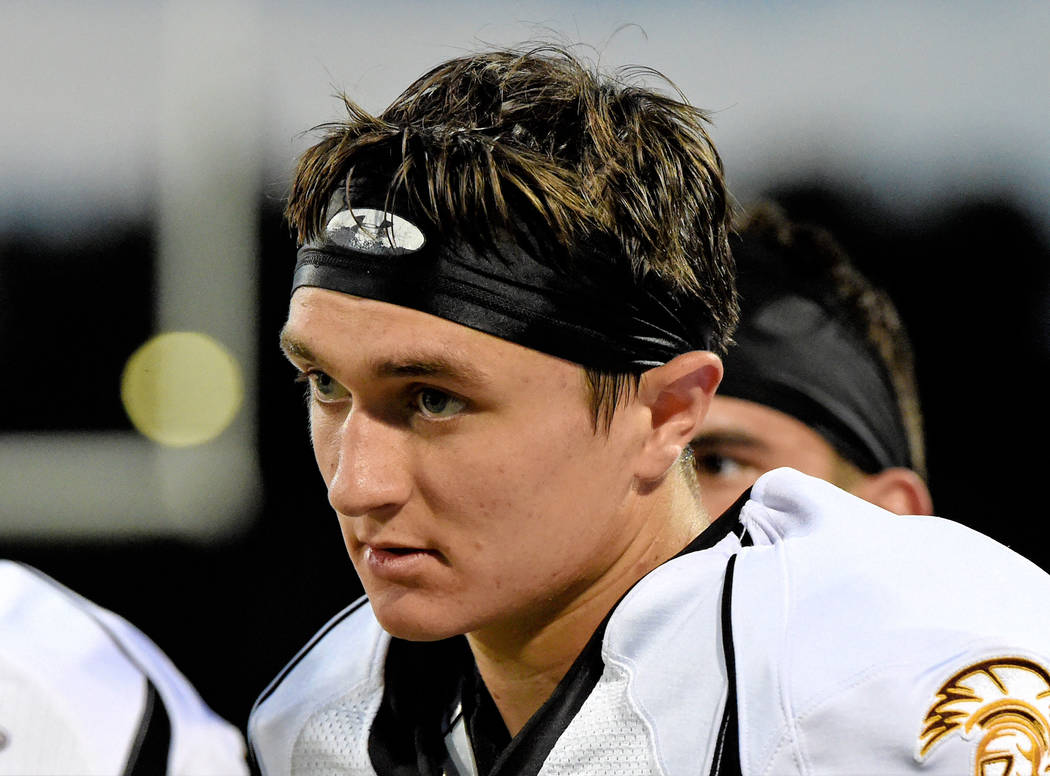 Peter Davis/Special to the Pahrump Valley Times TJ Milk threw for more than 2,500 yards during his career at Pahrump Valley High School and was the Trojans' second-leading rusher as a junior. 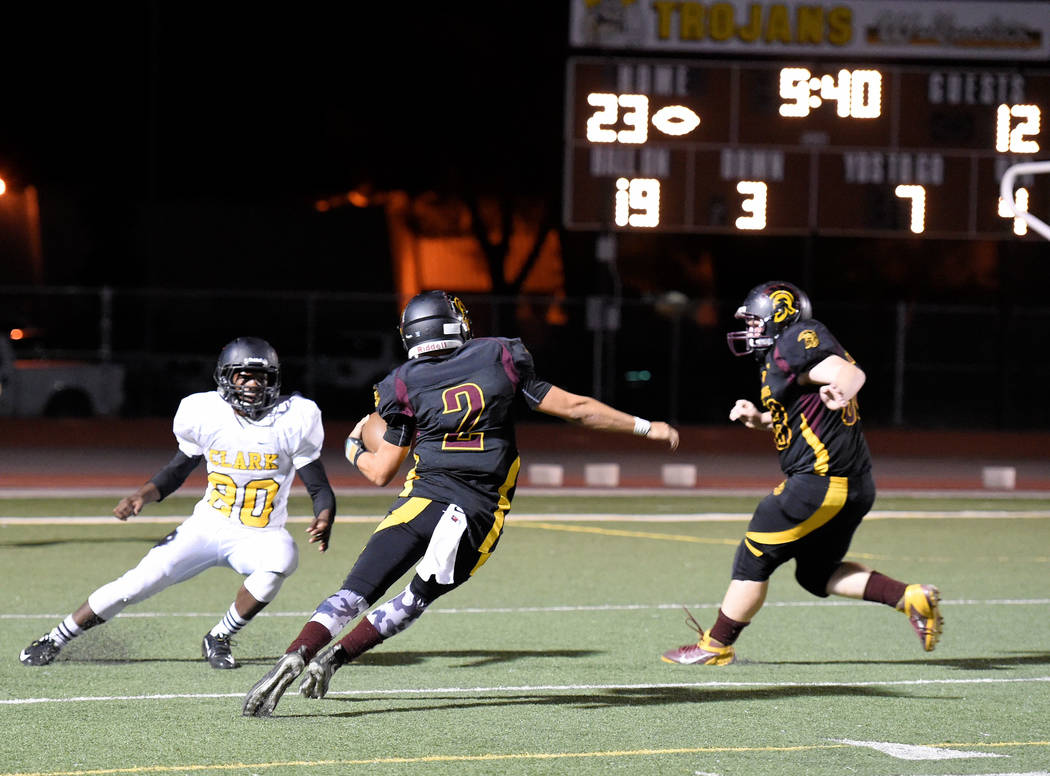 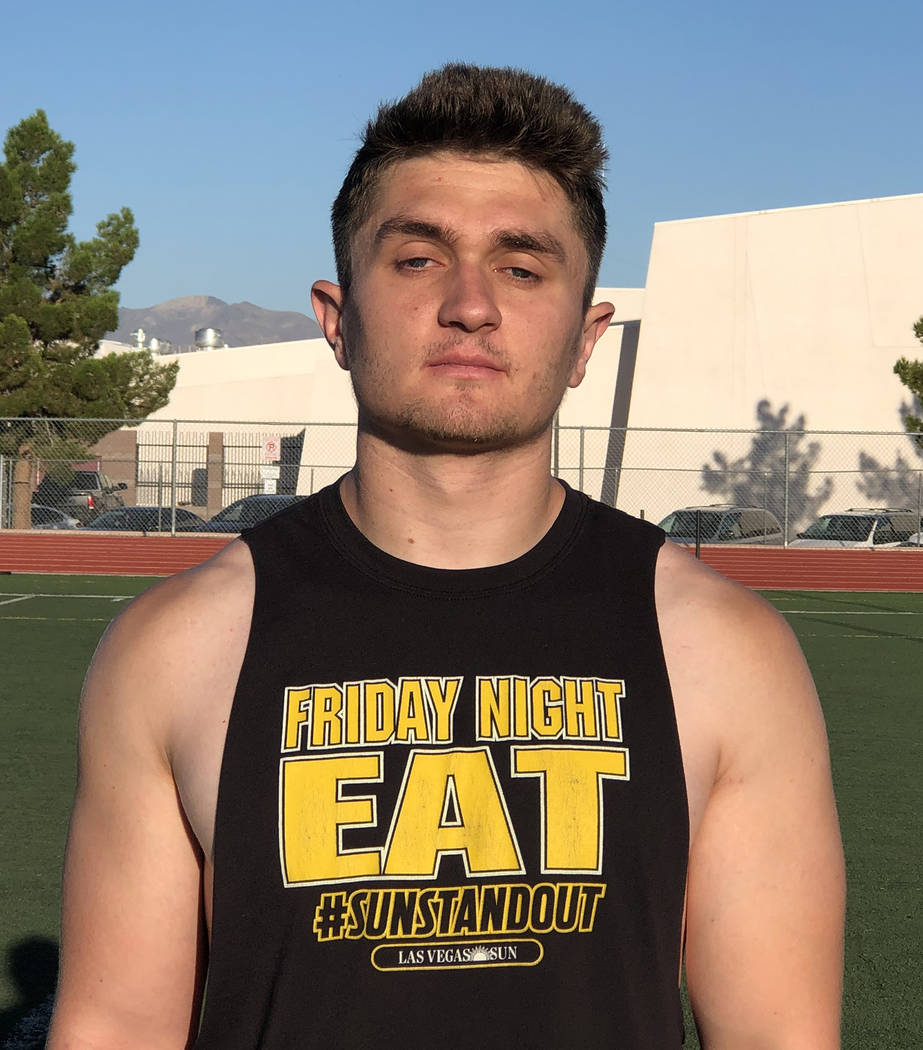 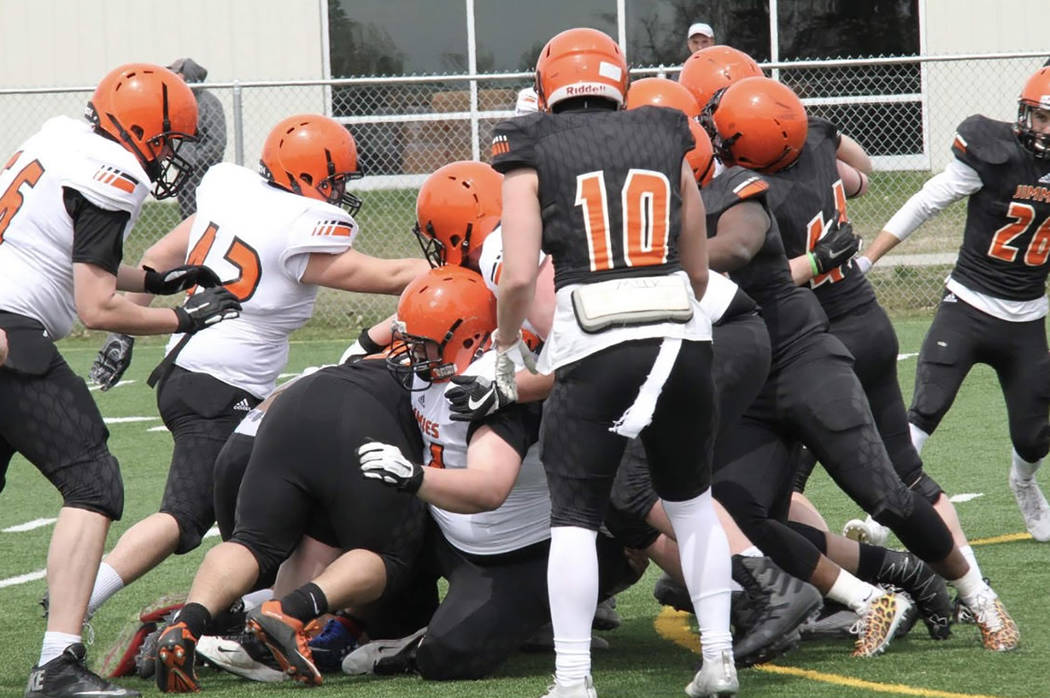 Special to the Pahrump Valley Times University of Jamestown strong safety TJ Milk (10) moves in on a play during the Jimmies' spring game April 27 in Jamestown, North Dakota.

Editor’s note: This is the seventh in a series catching up with Pahrump Valley High School graduates who are continuing their athletic careers in college.

TJ Milk has seen some major transitions since graduating from Pahrump Valley High School in 2016 and going to the University of Jamestown in North Dakota to play football.

First, his school changed conferences, moving from the North Star Athletic Association to the Great Plains Athletic Conference. Then, his school changed head football coaches as Josh Kittell resigned in January to become the recruiting coordinator at North Dakota State University and was replaced by Jamestown alum Brian Mistro.

But while those transitions affected the entire program, another transition was specific to Milk, who ended up changing positions. Suddenly, the player who threw for roughly 2,500 yards in high school and was his team’s second-leading rusher as a junior was playing strong safety.

“My freshman year I redshirted, I played quarterback still,” Milk recalled while working out with the current Trojans last week. “Going into my sophomore season is when I got approached to switch positions. I’ve always been someone who, whatever I can do to get on the field, play and help the team and make an impact, is what I want to do. And they said your best position to do that going forward is playing defensive back.”

Milk said it took time to get used to the most obvious difference between the positions.

“It was tough at first, and I think the biggest thing it took me getting used to was the hitting,” he said. “The consistent hitting took a toll. I spent my entire life playing quarterback just trying to avoid getting hit, and then I got to be at safety and it was like you better hit every single play. It was a learning curve.

“I feel great now. Athletically I was fine, but the consistent hitting took getting used to, but I got over that when I was a sophomore.”

The hard-hitting position requires a bit more bulk, so the high school sophomore listed at 134 pounds who became a 185-pound senior quarterback is now a 6-foot, 200-pound college safety. Pahrump Valley head coach Joe Clayton is not surprised Milk was able to make the adjustment.

They still do, as new Jamestown coach Brian Mistro is already a big fan of his strong safety.

“TJ is a great ambassador for our program,” said Mistro, who was a two-year starter at safety and team captain for the Jimmies. “He is a guy we can lean on to help tutor the younger players and show them the right way to do things. I haven’t heard a bad word about him since becoming the head coach here at UJ. I would take a team full of TJs.”

As far apart as Jamestown, North Dakota and Pahrump, Nevada might be on the map, Milk said the two have a lot in common with small-town feels and caring communities.

“I always tell people a story,” he said, the enthusiasm growing in his voice. “I was getting my battery changed at Walmart, and I didn’t have a tool. A guy was trying to help me in the parking lot, and he went inside and bought me the tool. For no reason. He was like, ‘Hey I’ll be right back, just wait five minutes.’ I was like, what is he doing? Is he getting water or something? And he comes back with the tool.

“It really shows how much those 750,000 people care about each other. It kind of has the same feeling as Pahrump.”

One other former similarity that has changed recently in Pahrump, and Milk hopes to see change in Jamestown, is losing football. Since Mistro graduated in 2009, the Jimmies are 32-71 under four coaches with no winning records. Over the same period, Pahrump Valley has posted a very similar record of 30-66, including 12-25 during Milk’s four years.

“The biggest thing I remember was we were all really good friends, and we all got along really well together,” he reminisced. “It was a good feeling, a good vibe when we were out here.”

“A lot of us are close today. I’ll go to the gym out there at night and I’ll see a guy from the football team I haven’t seen in four years, and it’s just like another day with him. I think we formed some really strong relationships and had some really good bonds.”

Milk gets a similar feeling with the Jimmies, and he said the coaching transition is a positive that brought the team together.

“We went from a team not winning any games to a team that can actually compete and win a majority of our games this year and be right there with any team in our conference,” Milk said. “I think our culture has changed a lot, and it’s kind of the same thing as when I was in high school. We were kind of in that transition of trying to get to be a better team, try and compete consistently. It’s kind of the same thing we’re doing up there.”

Neither the conference’s coaches nor the media covering the league see it, at least not yet. Both groups picked the Jimmies to finish last for their second season in the 10-team GPAC, which features the defending NAIA champions from Morningside College in Sioux City, Iowa.

While calling going to school and playing football at Jamestown “a great decision I made,” Milk is not positive about how he appeared on the coaching staff’s radar.

“I’m not 100 percent sure exactly how they found me, but here we are,” he said. “I just remember one day I started getting emails from one of the coaches (Travis Titus) who recruited Nevada. Him recruiting me played a big part of it. But it worked out really well.”

The University of Jamestown is a private institution of 1,100 students — smaller than Pahrump Valley High School — from 30 states and 20 nations. The school, which competes in the National Association of Intercollegiate Athletics, was founded in 1883 in Jamestown, a city of 17,000 midway between Bismarck and Fargo.

“It’s a smaller school,” Milk said. “The faculty up there, the coaching staff up there, it just felt right.”

Mistro is glad it did, citing Milk as an example of an out-of-state student buying in and becoming part of the Jamestown community. The new coach pointed to Milk’s abilities as a student, a mentor for younger players and as a positive representative of the football program and the university.

“He is the epitome of Jimmie Pride, and I can’t wait to see how this year unfolds for him,” Mistro said. “On top of on the field, he’s a great student on campus. He is very involved on campus, and I’m pretty sure he could run for president.”

In fact, political office is something Milk already is considering. The political science and history major is aiming at law school — he hopes for UNLV but said other schools in the Southwest, such as Arizona, Arizona State or UCLA, would be great for him — and hopes eventually to live and work in Southern Nevada.

Those future plans mean it’s unlikely Milk will use his fourth year of football eligibility, as he is on track to graduate in four years.

“I’m probably going to leave after this season, and that’s only because I really want to go to law school, and it’s another three years of school, and part of me in the back of my mind just wants to get that over with as fast as I can,” Milk said. “You never know how I’ll feel at the end of the season. I know our coaching staff would be welcoming if i wanted to come back, but right now I want to get law school over with as fast as I can.”

While many college students want to milk their undergraduate days for all they’re worth, Milk’s desire to get on with life might be partly because of his desire to be near home despite his appreciation for North Dakota.

“I miss a lot of the people. my family, the people I grew up with, the coaching staff,” he said. “I love these guys, and they left a lasting impact on my life. I care about Pahrump and the community at lot, but at the same time being in North Dakota is awesome. It’s going to be my fourth year. I look back and think, wow, this is a great decision I made. The people up there are some of the most incredible people in the world.”

But with what could be his final year in North Dakota upon him, seeing the football team improve upon last year’s 3-8 record (2-7 in the GPAC) is atop his agenda.

“I think we’re going to be really good,” Milk said. “No matter what, we’ll be competitive in every game. I think this will be the best season we’ve had in a while.”

But however it turns out, one thing will remain the same.