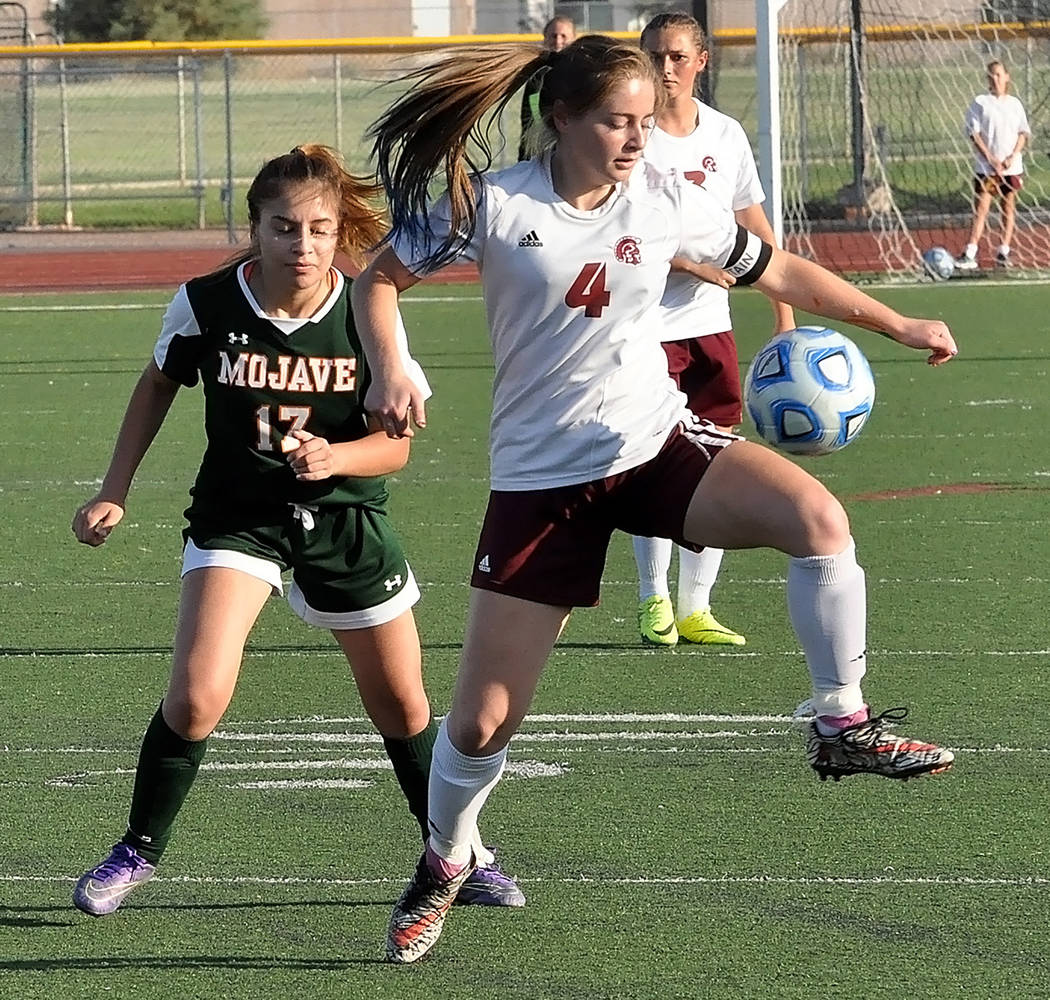 Horace Langford Jr./Pahrump Valley Times Kathy Niles makes a great midair stop for Pahrump Valley against Mojave during her senior year with the Trojans in 2017. Niles was the Trojans' third-leading scorer that season, posting 7 goals and 10 assists. 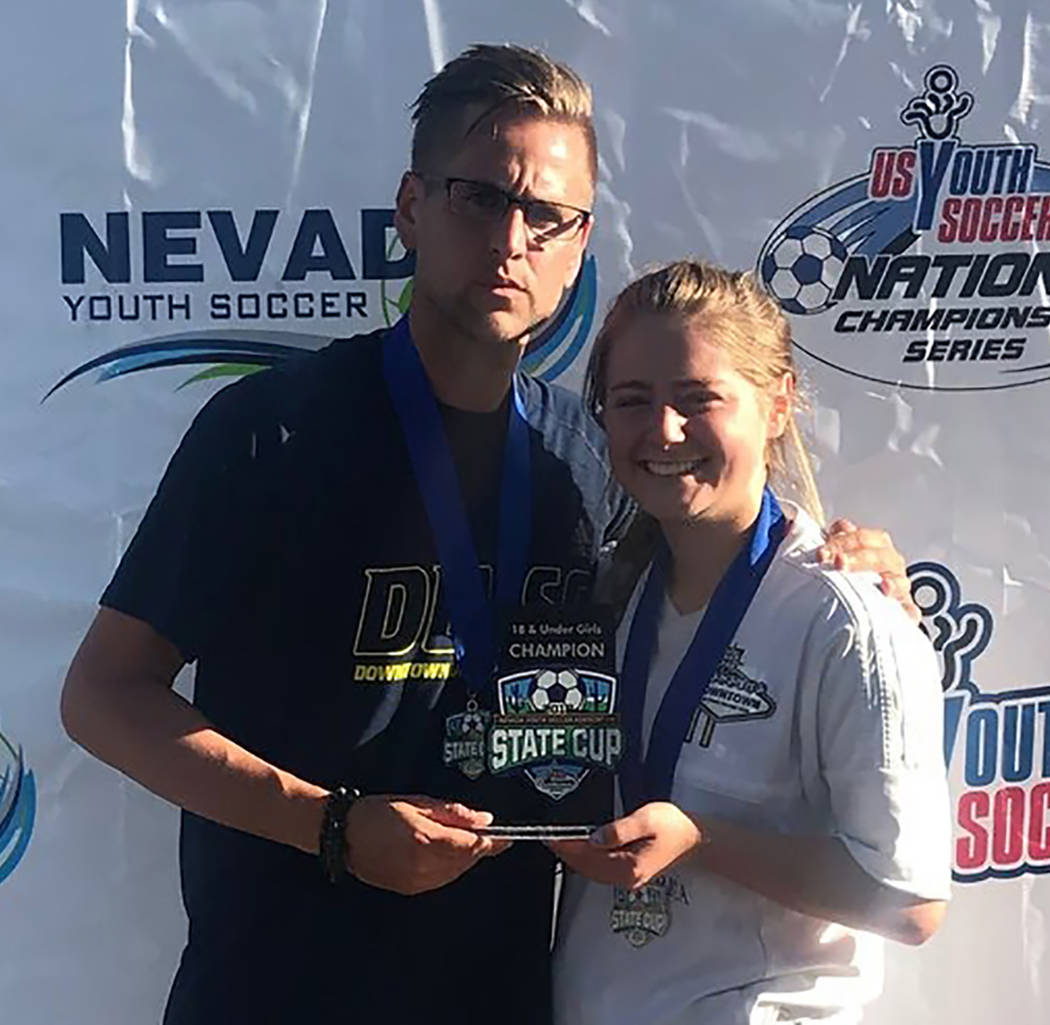 Rose Niles/Special to the Pahrump Valley Times Kathy Niles, who played for the Downtown Las Vegas Soccer Club, poses with Samuel Barnett, the coach of the club's 00 team, after a 4-0 win in the State Cup final April 22, 2018, in Las Vegas. The squad played in the regional tournament in Hawaii. 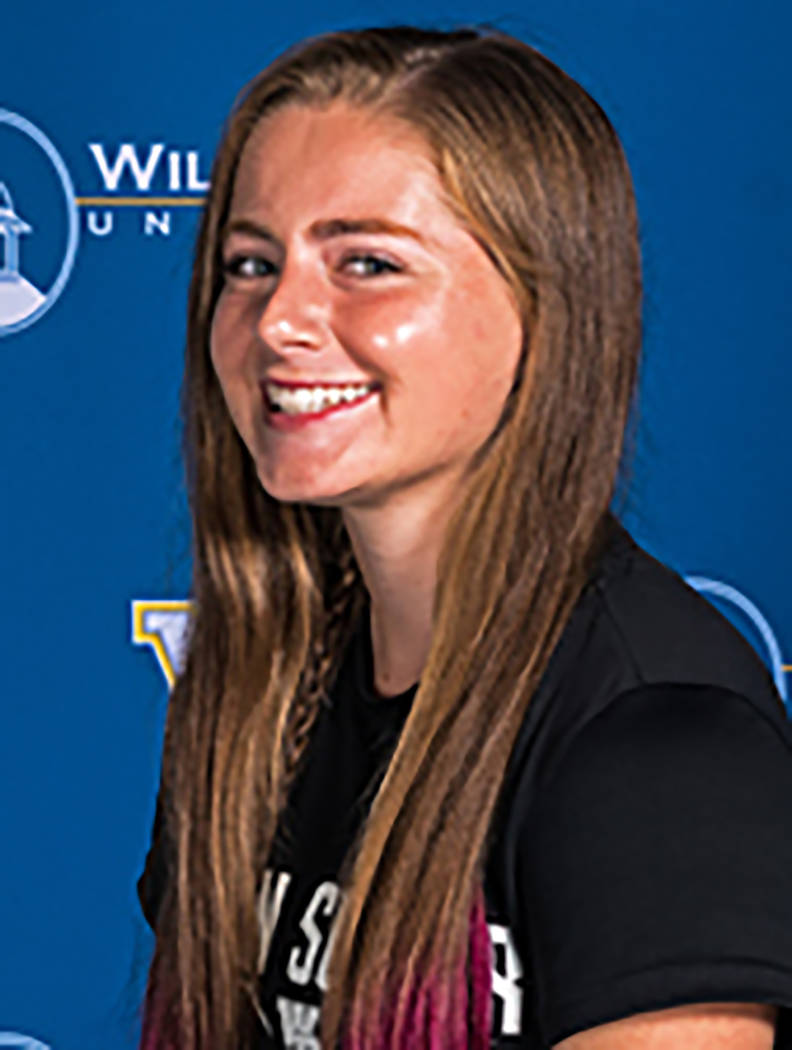 Ask Kathy Niles what you can’t get living in Iowa after living in Southern Nevada, and thoughts turn to food.

All is not lost, however. “They have a place called Culver’s. It’s really good.”

While In-and-Out famously has no interest in nationwide expansion, and Culver’s, known for “butterburgers and fresh frozen custard” has no location closer to Pahrump than Bullhead City, Arizona, Niles didn’t go to Iowa for the food.

When her family moved to the Hawkeye State, Niles, a starter in softball and soccer at Pahrump Valley High School, looked for a college near their new home. What she found was William Penn University, a Quaker-affiliated school of just more than 1,000 students in the small town of Oskaloosa, about an hour’s drive southeast of Des Moines.

It’s also about an hour from her family’s home in Newton.

“They like it a lot,” Niles said. “They’re enjoying it there.”

Niles might have found a home as well, as she immediately moved into the starting lineup as a freshman for the Statesmen’s women’s soccer team.

“Kathy came in as a freshman this past year and was a key player for us,” William Penn coach Jaymee Highcock said. “She started in almost every game, and she showed great versatility.”

Niles was primarily a defender for the Statesmen, recording only shot on the season.

“I started at the beginning of the season, the very first preseason game, and started for a while after that,” she recalled. “But I had a knee injury that just kept developing during the season and started making mistakes in games. So the last, maybe, four or five games I stopped starting.”

The injury was related to a condition that required treatment after the season.

“The outside of my quad muscle was overdeveloped compared to the inside one, so it was dominating and pushing my knees in,” Niles explained. “I had to go to PT to strengthen the inside. I don’t know if there’s a technical term for it, but it was bad.”

Before then, the Statesmen got off to a good start, going 4-1-1 before hitting conference play. A member of the Heart of America Athletic Conference, William Penn saw its young team struggle in the league.

“It’s really hard,” Niles said of the competitive level of the HAAC. “It’s a lot higher than I thought it would be. I was surprised when conference started, because during preseason it wasn’t that much different (than high school). Once we hit conference level, it was just crazy.”

Crazy enough that the Statesmen needed a last-minute goal in their regular-season finale against Baker just to make the conference tournament. They didn’t stay in the tournament for long, as 10th-seeded William Penn fell to seventh-seeded Graceland 4-1 in the play-in round.

But the future could be bright for the Statesmen, who finished 8-10-1 overall, 3-8 in the conference.

“Our team was really young this year,” Niles said. “We had a lot of incoming girls play. We don’t lose very many seniors. I think at one point we had eight freshmen starting.”

Niles played both center back and outside back in William Penn’s 4-5-1 system.

“At the beginning of the season I really liked playing on the inside, but toward the end of the season I liked the outside better because there’s more one-on-one stuff, and I’m better at one-on-one,” Niles said.

“We played her in a number of positions, and she excelled in a left back or a center back role,” Highcock said. “She was very aggressive in the tackle and reads the game very well.

“She has a bright future ahead in soccer, and we are lucky to have her at William Penn.”

The team had an active spring season, playing 10 games against a lot of junior colleges and some teams they won’t see in conference play. As for the academic side, Niles, a National Honors Society president in high school and a six-time scholar-athlete award winner, said she was pleased with her first year of college.

“It went really well,” she said. “I think I’m going to do biology and minor in chemistry.”

Outside the classroom, it was difficult not to notice the dramatic difference between Pahrump and Iowa.

And probably go to In-and-Out.