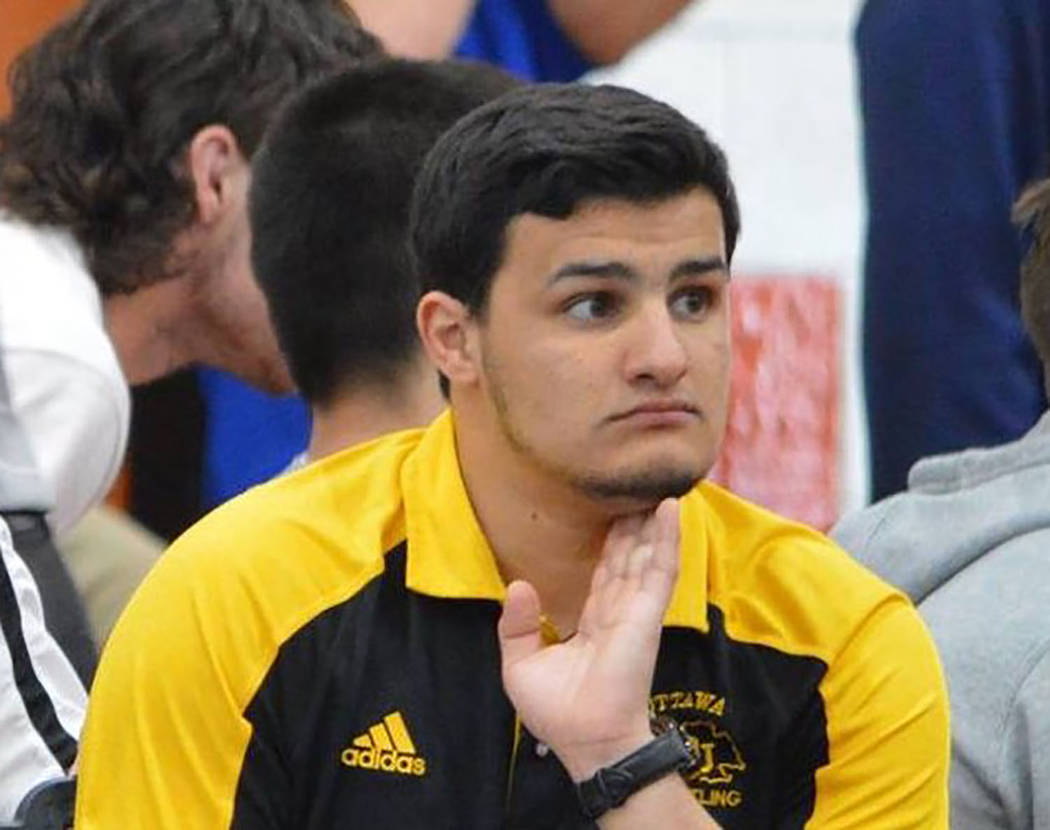 Special to the Pahrump Valley Times Antonio Sandoval, who went to Ottawa University in Kansas to wrestle, has been forced to the sidelines because of multiple concussions and is now on the Braves coaching staff. 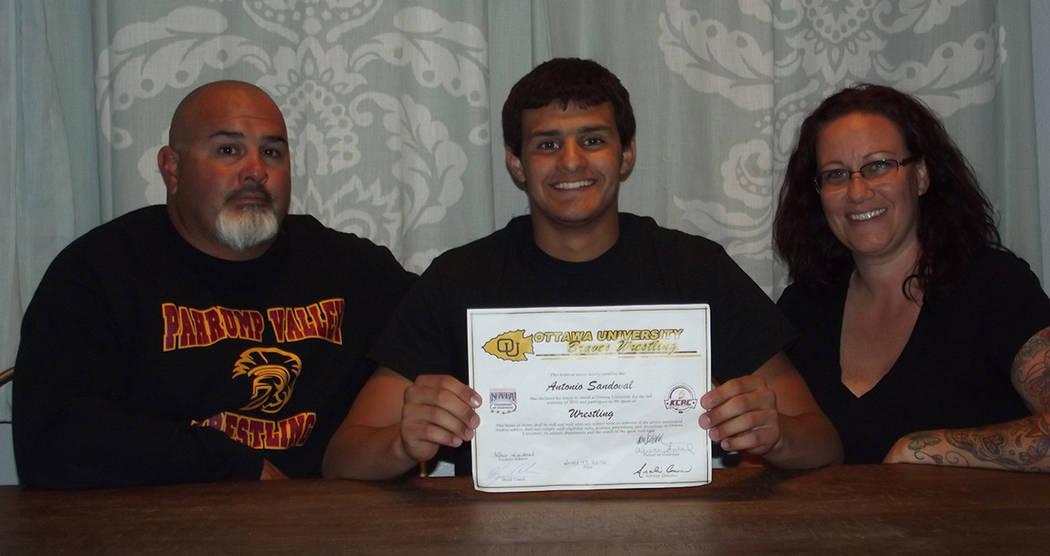 Pahrump Valley Times file photo Flanked by his parents, Antonio Sandoval displays his National Letter of Intent to wrestle at Ottawa University in Kansas in this 2016 photo. 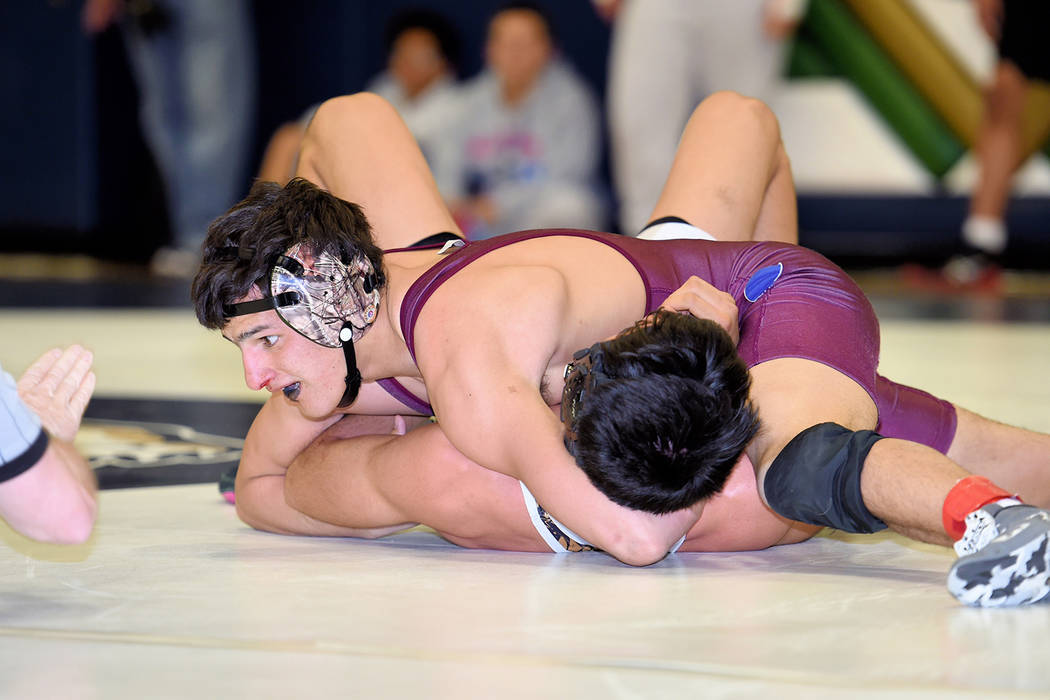 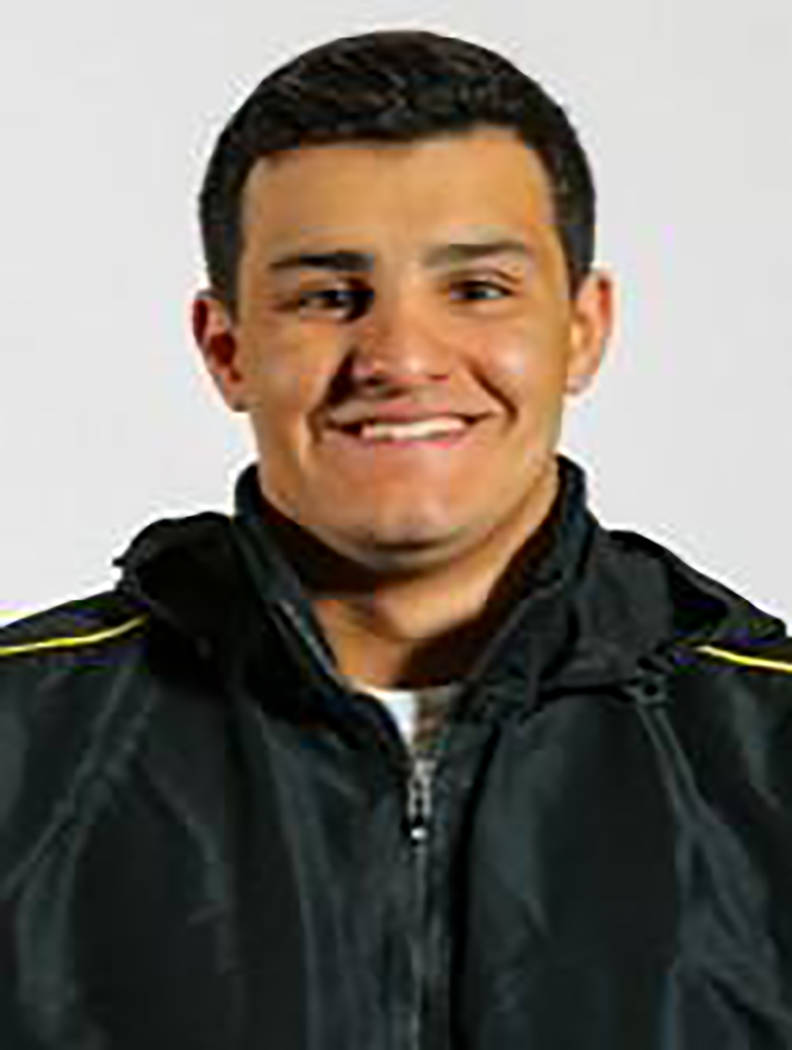 Editor’s note: This is one in an ongoing series catching up with former high school athletes from Nye County.

Last summer, Antonio Sandoval was preparing to wrestle for Ottawa University in Kansas despite suffering three concussions, each worse than the previous one.

Sandoval, a 2016 graduate of Pahrump Valley High School, had worked with a neurologist on protective headgear and was as prepared as anyone could be to make the decision to continue his wrestling career, which, to that point, had been limited to a half-dozen or so mostly unsuccessful bouts.

“I went into school this year thinking I was going to be able to compete again, full energy, ready to do it, and we started rolling though practices,” Sandoval said. “The conditioning practices were fine, but once we started getting into the wrestling aspect of things, my body started to react in ways I didn’t quite expect it to and not according to what I had hoped would come to fruition.”

The problem was in his neck. Sandoval explained that in trying to protect his head he was causing damage to his neck, and it didn’t take long for him to reconsider his decision to continue wrestling.

“At the end of the day I decided I had to listen to what my body was telling me and that it was probably time to get rid of that urge to be the one in the center and continue to ignite that fire to push other people to be the best they could be as a coach,” Sandoval said.

Despite the pain, the decision wasn’t an easy one. He talked to his roommates, who were teammates and close friends; he talked to his parents, people he called his biggest supporters; and he talked to Ottawa coach Colby Crank, who, Sandoval said, agreed that being healthy going forward in life was more important than his few, short years as an athlete.

“Every single ounce of my being told me that I had to keep wrestling,” he said. “For probably a good month and a half I struggled, trying to make that decision because I couldn’t bring myself to put the competitor in me away. It’s not like a switch I can flip off and say, hey, I don’t want to compete any more. It was something that had consumed a majority of my childhood because I wanted it to, and for me to finally make that decision and say that I was done competing took a long time.

“To this day there are parts of me that, when I see a wrestling mat or when I put on my shoes, I’m still ready to go compete. But I have to remind myself constantly that I can’t anymore. It’s a tough conversation to have with yourself, but I feel it’s one that’s absolutely necessary.”

Sitting in the Pahrump McDonald’s, Sandoval seems perfectly at ease with his decision. If there remains any angst about not wrestling anymore, it doesn’t show. Instead, what shows is someone very comfortable in his own skin.

That might be because wrestling remains a big part of Sandoval’s life, and, he hopes, his future. Crank put him on the coaching staff and, with another year of school after this one, the opportunity to get two full years of coaching along with the time spent helping the team while he was recovering from his concussions would prepare him for a future in the sport.

“For me, it was a relatively easy transition, because I have been helping out in the coaching aspect the past few years,” he said. “Now I can focus on just a few select athletes and try to better them every single day.

“My responsibility is just to help instill the values the coaches are preaching every day in practice. If there is any miscommunication … I’ll help bridge that gap. I’m kind of an athlete representative, a lot of issues that athletes have they’ll come to me and I’ll talk to coach about them.”

And yes, going from the team to the coaching staff means all but the freshmen know him as a teammate first. That has put Sandoval in an interesting position, and he admits he has had to play “good cop, bad cop” when issues have arisen.

“Being a leader as I was on the team previously to where I am now, people don’t really approach conversations with me much differently,” he said. “I try to maintain professionalism when it comes to more serious aspects, and when it comes to those aspects they approach me the same way they did before.”

And the Braves coaches are comfortable with Sandoval in his new role.

“They treat me just as they always have, extremely supportive,” Sandoval said. “They’re always in my corner, and they want me to be the best that I can be whether as an athlete or as a coach.”

There is reason to believe Sandoval will be more valuable to Ottawa in the corner than on the mat, as he is quick to say his college wrestling career was short — six or seven bouts, he believes — and unsuccessful, and not simply because of the serious concussions.

“I won my first college match, my first tech fall, then my second match was against the No. 6 kid in the country at 133 pounds,” Sandoval recalled. “He beat me up pretty good. That was back when I was trying to work through all the head issues, my hand was messed up. The next tournament I went to we call the mini-nationals. Every top 20 team is there, every ranked wrestler in the country is there, one big bracket. My first kid was the No. 6 kid at 141 pounds, and my next match was a kid who I want to say was 17th.

“From a win and loss standpoint, not good at all. I did awful, but from the learning and the understanding standpoint of it, I think I did fantastic. College wrestling is unlike high school wrestling, club wrestling, anything in the world, the level of intensity is 30-fold. Hand fighting in high school you’re really slow, relaxed with it. Hand fighting in college wins the match. From a statistical standpoint, I was probably the worst kid on the team, but from the overall aspect of what wrestling truly is I think I had a really successful season.”

Sandoval is pursuing a degree in engineering at Ottawa — “I believe I passed all of my classes,” he said with a wry smile — and that is certainly his primary employment goal after his graduation in 2021. But he also hopes to use the lessons he learned during his brief college wrestling career for another job.

“I still want to go on to be an engineer, and I’d love to be a head wrestling coach,” he said. “I know (Pahrump Valley High School) coach (Craig) Rieger is retiring here shortly, and if I can get my name in the ring and see how that plays out, that would be fantastic.”