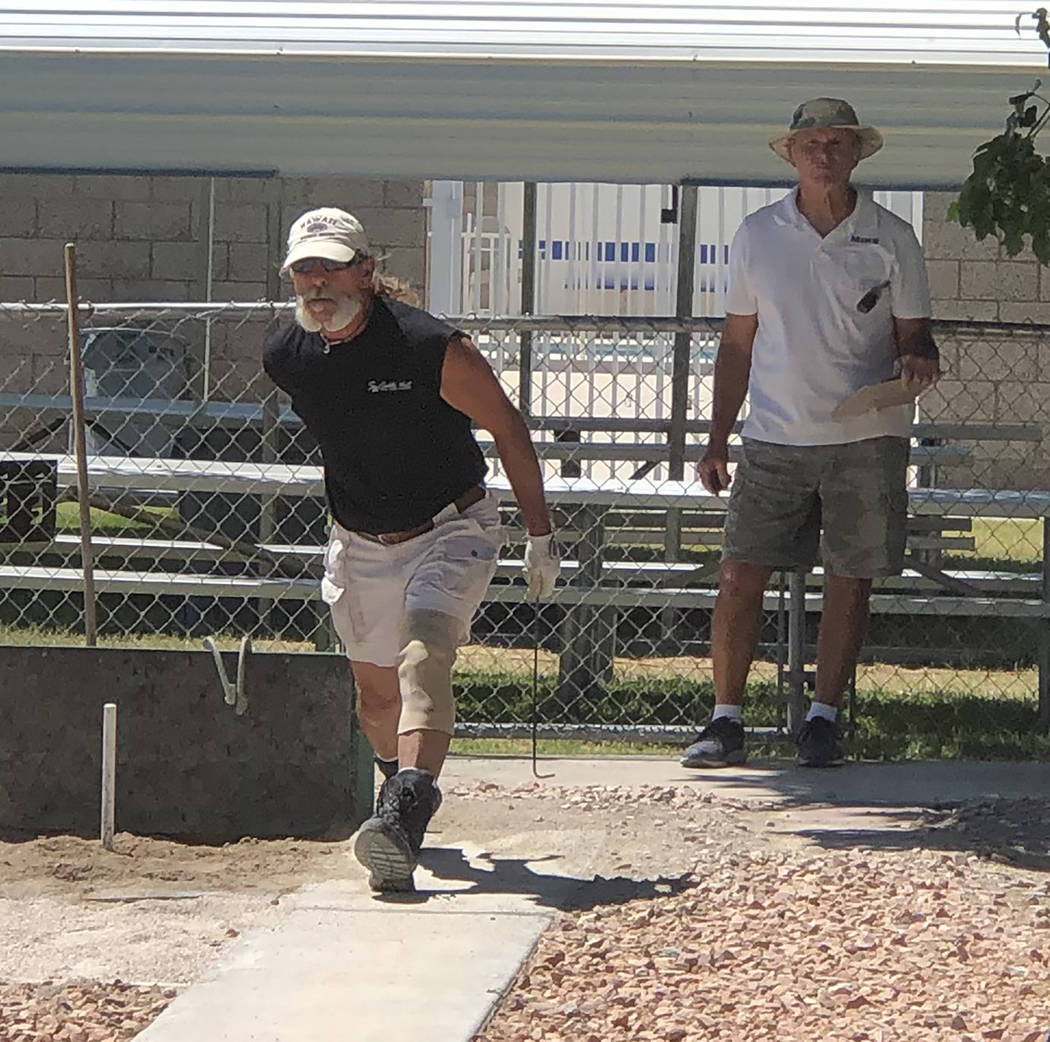 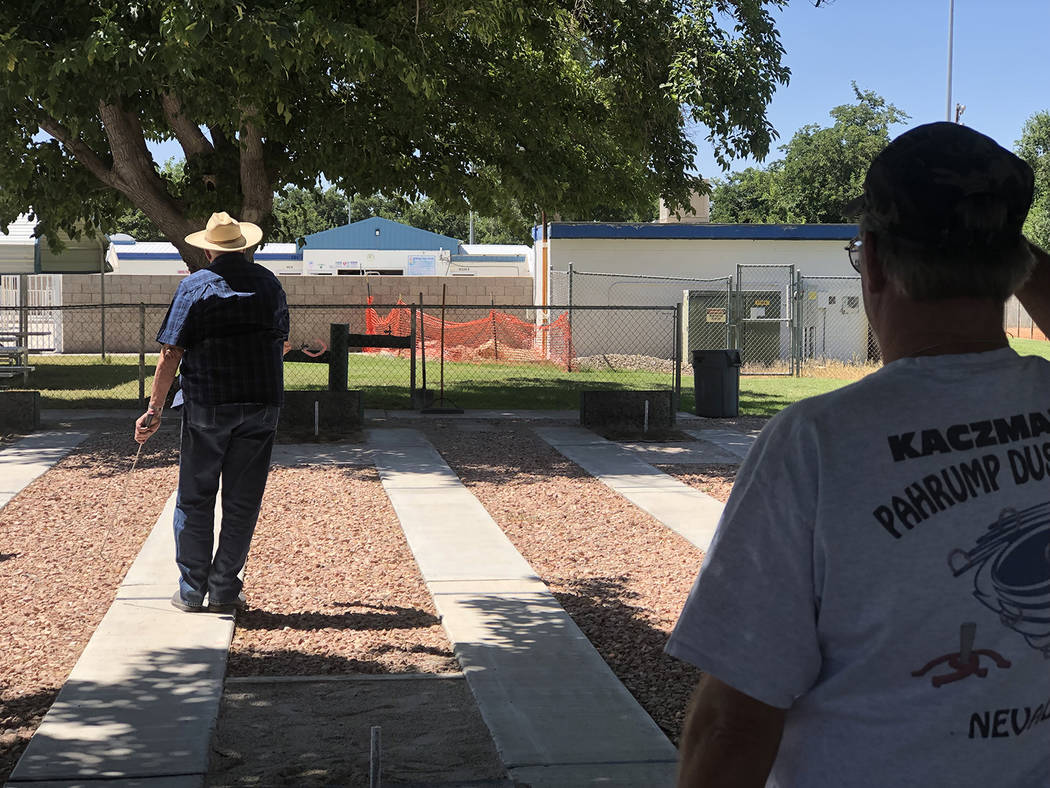 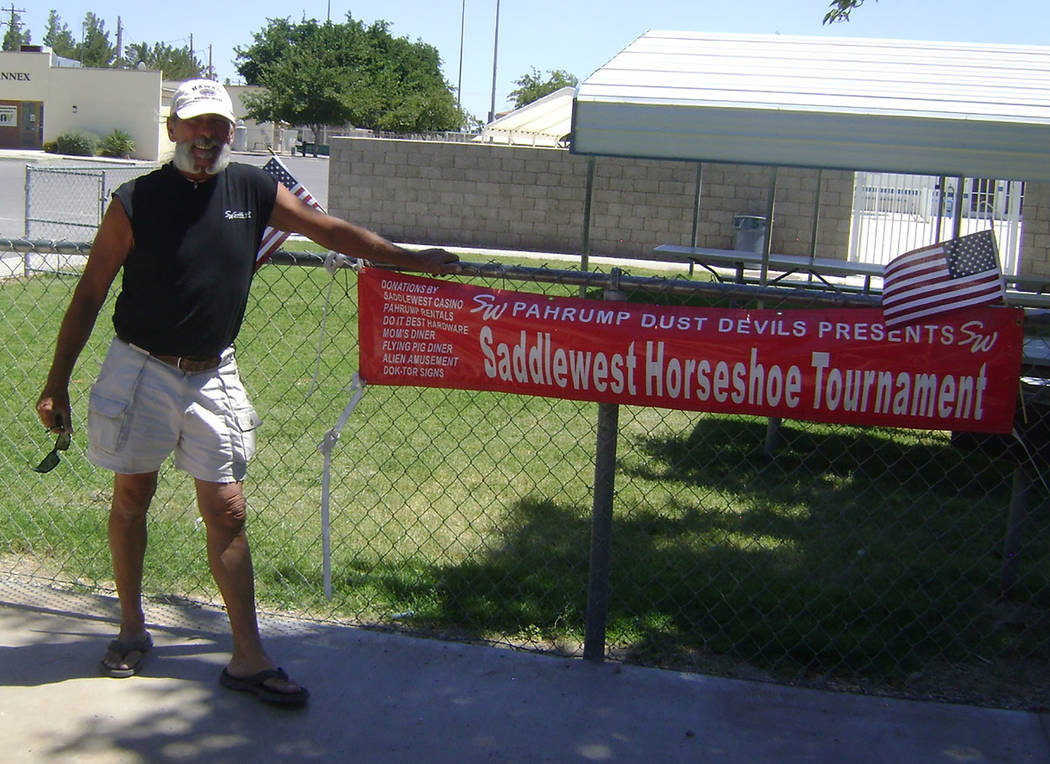 Mike Norton/Special to the Pahrump Valley Times Dok Hembree of Pahrump poses with the sign he made for the Saddle West Open, in which he won the Class B title on Saturday at Petrack Park. 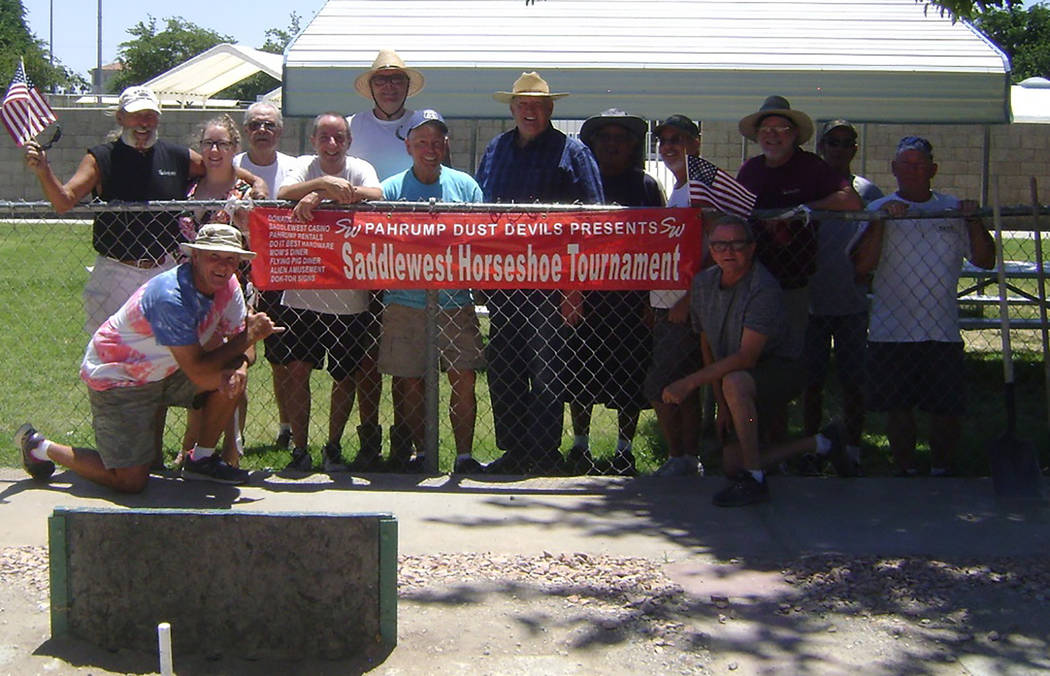 Mike Norton/Special to the Pahrump Valley Times Participants in the Saddle West Open on Saturday at Petrack Park in Pahrump.

Ty Frazier of Kingman, Arizona, went 4-0-1 in the A Division, pitching 40 ringers more than anyone else in his bracket to capture the Saddle West Open on Saturday.

Frazier, who also has a Las Vegas address and is a registered Nevada pitcher, said he has been pitching competitively for a couple of years after starting back in 2005 and then giving it up. He thanked Mike Norton and Lathan Dilger of the Pahrump Dust Devils for their efforts.

“Mike is really nice, and Lathan really did a fine job,” said Frazier, who pocketed $50 for his tournament championship. “He invited us down to Pahrump, so I thought, well, I’ll come down here, have an earthquake and enjoy pitching horseshoes.”

His other games were more comfortable as he tossed 80 ringers on 200 shoes, almost exactly hitting his entry ringer percentage of 40.83.

Frazier said it was only his third competition in Pahrump but he frequently pitches in Las Vegas events.

Dennis Andersen won four of five games to finish second in Class A.

Over in Class B, Dok Hembree of Pahrump dominated the field, going 5-0 and outscoring his opponents 171-85. Hembree, whose entry ringer percentage was 26.96, hit on 34.5 percent of his pitches Saturday morning.

The other five competitors beat up on each other, each splitting their other four games and losing to Hembree to finish in a five-way tie for second at 2-3.

The tie was broken on ringer percentage — there is never much interest in a five-way playoff — with Don Brown’s 28 percent taking second and Joseph Kalache taking third with his 25 percent. Brown was the only B pitcher other than Hembree to top his entry percentage.

Norton said Saddle West has been a tournament sponsor for several years.

“They gave us $40 room rates, which is really good, especially for a holiday weekend,” Norton said. “We’ve got raffle prizes over here. Dok made the sign, and Joe’s Sanitation donated the port-a-potty.”

Second place in each division was worth $30, while third-place finishers took home $20.

Next up on the Nevada State Horseshoe Pitching Association schedule is the Tim Hall Wounded Warrior tournament this weekend in Reno, while the next event in Pahrump will be the Shade Tree Open on Aug. 3 at Petrack Park.