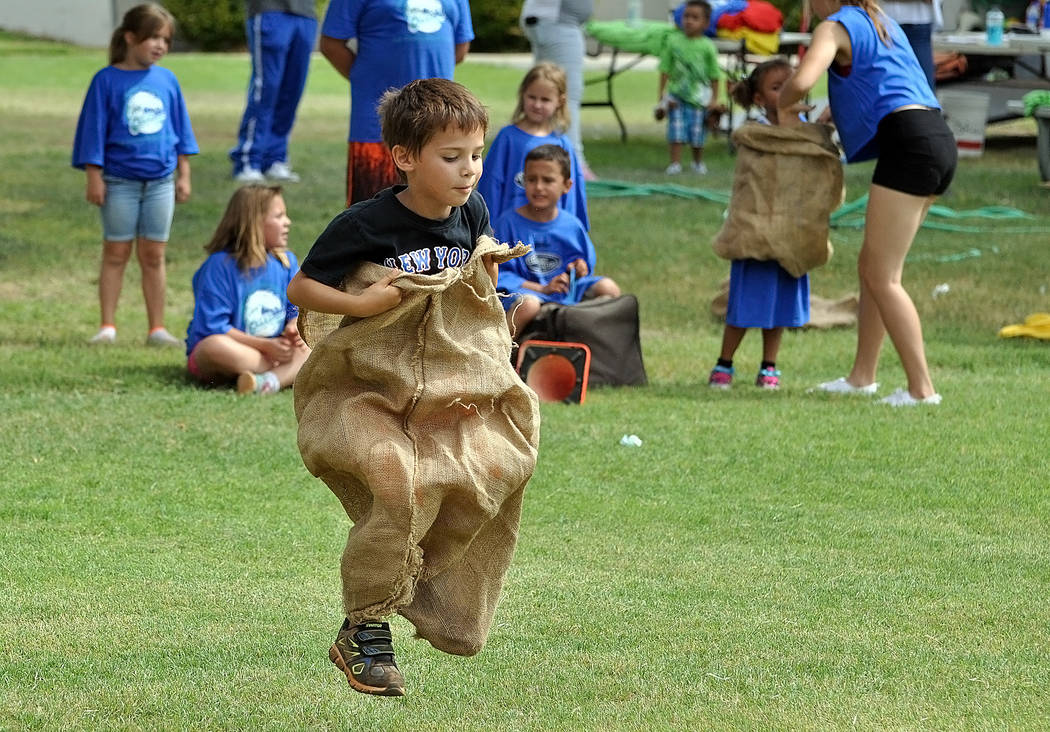 Horace Langford Jr./Pahrump Valley Times - About 30 kids came out for this year's games, which were held in Petrack Park. The program makes its rounds through the county and over 300 kids participate. G.R.E.A.T. stands for Gang Resistance Education and Training 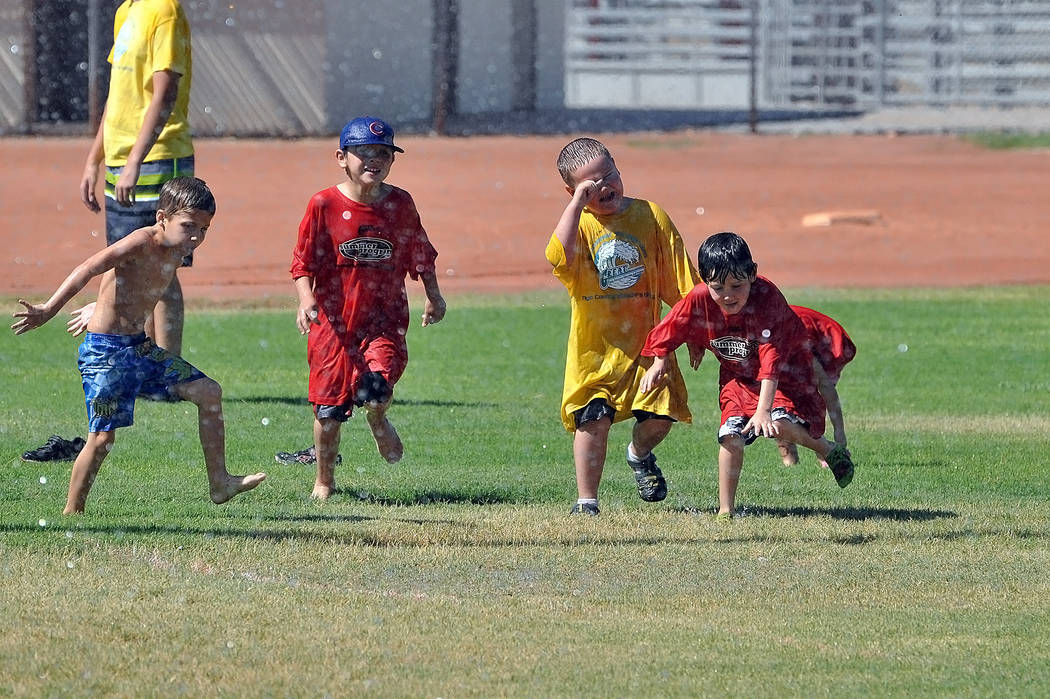 The G.R.E.A.T. Games at Petrack Park give the kids a good cooling down, which was courtesy of Pahrump Valley Fire and Rescue. 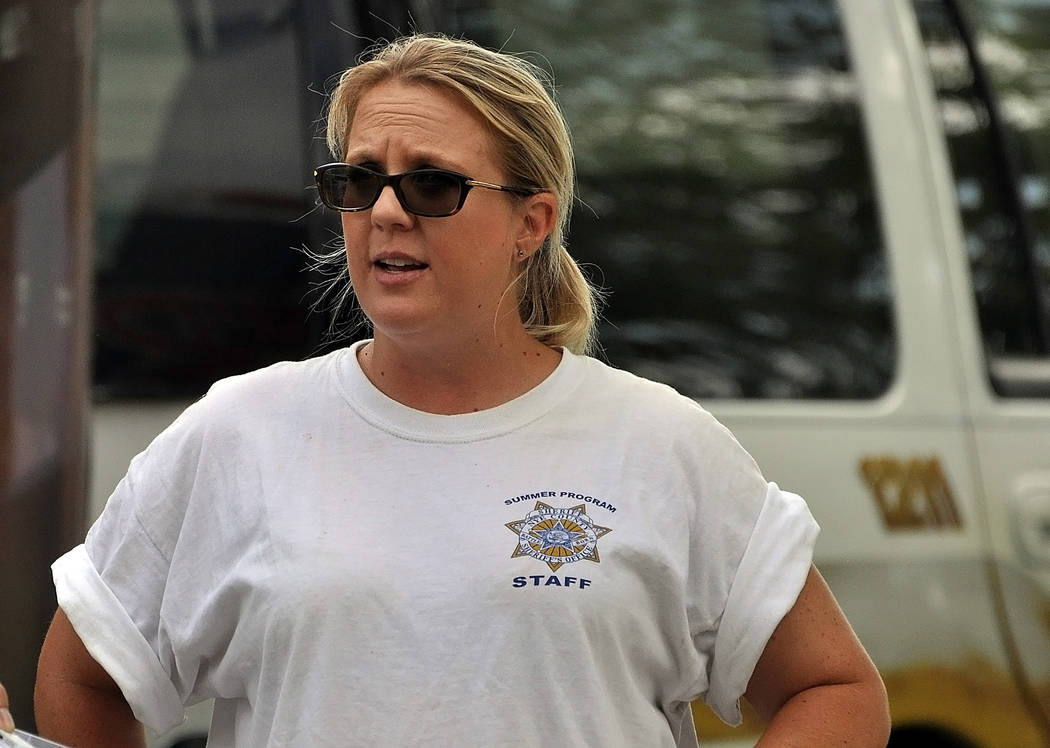 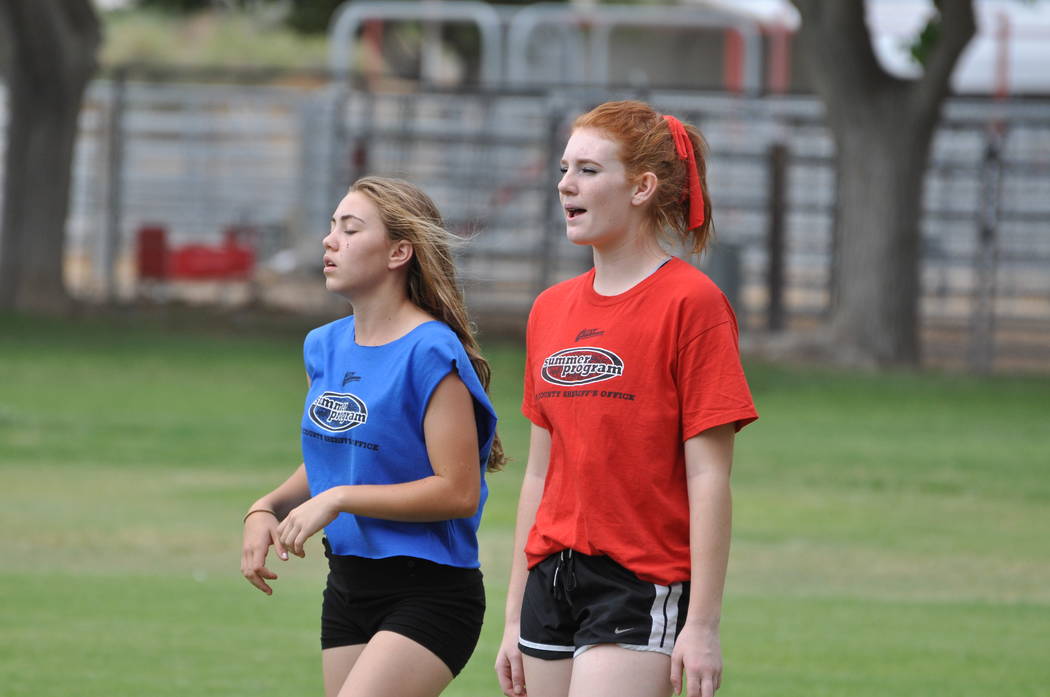 Melting volunteers: Two high school volunteers, Skyler Lauver, left, and Savannah Fairbank look like they need to be cooled down as temperatures soared to over 100 degrees for the games. 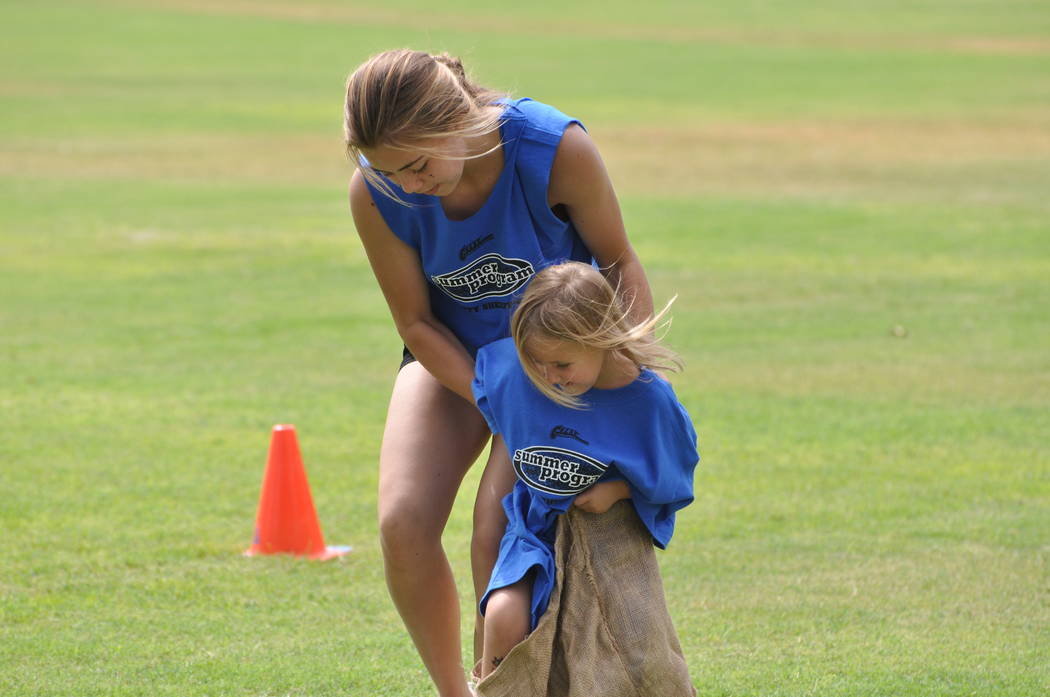 Photos by Horace Langford Jr./Pahrump Valley Times Roadside assistance: Skyler Lauver lends a hand to a stuck sack racer, who got a flat tire during a sack race at the G.R.E.A.T Games last week at Petrack Park. The games are organized by the Nye County Sheriff’s Office and they teach kids to make good choices regarding gangs and drugs.

The games were started by the Nye County Sheriffs Office to educate the youth about gangs and drugs. The anti-gang message goes on the road each year, where they spread their message to over 300 kids. This year the two Nye deputies spreading this word were Deputy Summer Kubanda-Danneker and Deputy Richard Scherer. The program is alive and well and will continue.

According to Dannecker, the primary backer has been Round Mountain Gold.

For some towns, the games are the only recreation the kids get.

“This year Tonopah had close to 100 kids,” said the officer in charge, Nye County Deputy Summer Kubanda-Danneker. “While Pahrump this year only had 30. The year before we only had seven. This is my second year and the games have a more D.A.R.E. emphasis because I am a D.A.R.E. officer but the curriculum is similar.

“We teach them how to make right choices, the difference between right and wrong and they get taught leadership. Pretty much too we get them out to get some exercise and teach them teamwork and how to be nice to each other and get along. The kids would learn how to avoid drugs and gangs.”

She said she had a lot of volunteers from the high schools in the towns she went to.

“I have high school kids out here as the coaches,” she said. “They are a lifesaver as far as the games. Some who are 0ut here helping me today are Savannah Fairbank, Skyler Lauver, Destiney Duff. Some kids come out here for community service hours for Key Club.”

As far as the low enrollment compared to other towns, Danneker said that the program used to get a lot of day-cares that would bring their kids to the program, and now they don’t. Also, Pahrump has a lot more to do in the summer for kids than the other rural towns.

“Those day-cares would bump the enrollment up to 150-200 kids,” Danneker said.

Pahrump is the last stop for the games this summer, having gone to Amargosa, Beatty, Gabbs, Tonopah and Round Mountain. Organizers save Pahrump for last. It takes six weeks to go to all the towns. The officers spend a week in each community.